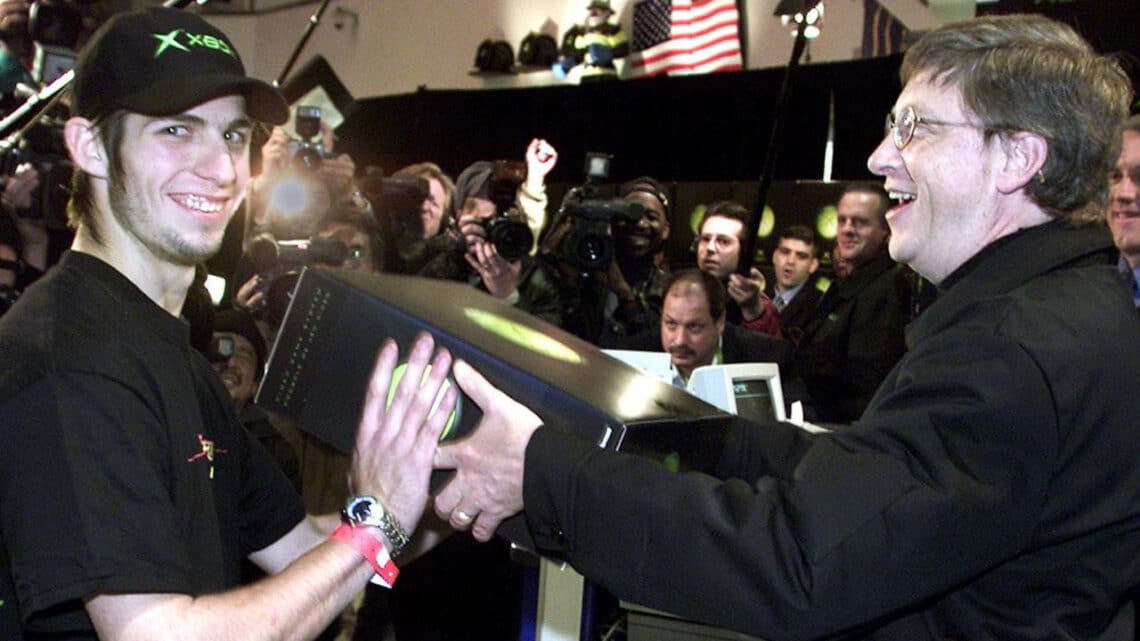 On this day, 15th November 2016, it has been 15 years since the launch of the original Xbox. Many things have changed in that time, and Microsoft has much of which to be proud. We decided to look at the less-remembered parts of Xbox history, the parts that sometimes fade away over the years, and the ones that just make you laugh.

The original Xbox controller, fondly known as the Duke, was in fact a terribly huge and unwieldy hunk of plastic – hence the swift redesign resulting in the ‘S’ pad. Keen that the rumors about its large pads didn’t alienate the Japanese market, which Microsoft still had dreams of conquering, the company decided to put up its most recognizable face in Bill Gates – and emphasize how small the new pad was by comparing it to a hamburger. They’re both all-American exports, see, and fit easily in the hand.

Halo Was a Mac Exclusive

Bungie’s Marathon was one of the few gaming highlights of owning a Mac in the 90s, and so it wasn’t too much of a surprise when Steve Jobs took the stage at Macworld in 1999 and announced that the studio’s next game, Halo, would also be a Mac exclusive. It came with one teeny, tiny screenshot.

The trouble is, the game looked really good to everyone who played it. And Microsoft needed a first-person shooter for their Xbox launch lineup. Big Bill Gates had a big old checkbook, and on June 19 2000 Microsoft simply bought Bungie outright. The game was rebuilt as an Xbox exclusive, and the rest is history.

XBLIG was an incredible initiative for the 360 that gave developers a direct route into the homes of players for the first time in history – people often mention Playstation’s Net Yaroze as a forerunner to this but, while admirable in its own right, it never had anything like the reach or vision of XBLIG.

The predictable consequence of opening the gates was that Xbox 360’s indie games section was flooded with poor-quality titles, with some developers raking it in on the backs of terrible, minimal-effort games with titillating store pictures. Discoverability was a problem it never got over (but then, neither has the App store or Android).

Outside of the moans, however, XBLIG was one of the bravest things Xbox has ever done, and it unarguably resulted in great games – like The Dishwasher, a great 2D beat-em-up that laid the foundations for developer James Silva’s later titles, including Salt and Sanctuary. Personally I’ll always be fond of an early and unlamented game, Angry Barry, which was pretty bad but cast you as Barack Obama beating up Republicans in a 2D side-scroller, where his special move was an Eagle Punch. Come back Barry, all is forgiven.

The original advertising campaign for the Xbox, which went by the name of ‘Champagne’ showed a woman in the emergency room delivering a baby. The child fires out of her like a cork from a champagne bottle and soars through the air, ageing before our eyes. The ad ends with boy (now man) crashing into an open grave, a cut to black, and the words ‘Life is short. Play more.’

It was a dramatic video. Too dramatic, it turned out, the ad was banned after airing for three months due to complaints from viewers to the Independent Television Commission.

The Xbox wasn’t the first console to let you play online but it aimed to be the smoothest setup and play of the offerings available. A part of that campaign that hasn’t aged well was the DarkMaster, a supposedly average gamer guy who would walk you through how to setup Xbox Live and use everything it offered. Every one of the DarkMaster videos sounds like it was written by an executive who was trying to write for ‘the youth’.

Young people today may hate being called millennials but at least this isn’t how adults think they behave:

Not to focus wholly on ads, but the first two generations of Xbox had, for me, the most memorable adverts of any console. Along with the banned Champagne advert for the original Xbox, the 360 had one that never made it to television (though, this time it was by choice).

The Standoff lifted the idea for the play gunfight in Spaced and expanded it out to take place over an entire train station:

In Spaced it played out with more detail, but I love that somewhere a marketing executive convinced a roomful of people and a station-full of actors to play along with the idea.

The taciturn, muscle-bound legend meets a fictional rival – and Arnie’s not looking too bad either. 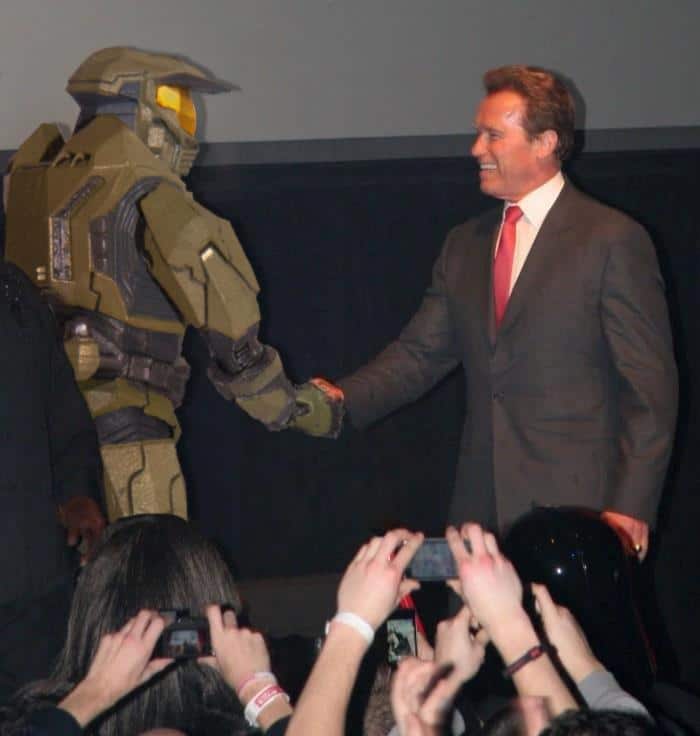 You may not think of the Xbox dashboard changing. Of course it does, every update brings some shift and squash, but I only remember the most recent iteration. Maybe the one before if I don’t like a change.

I’d completely forgotten the green and gold stylings of the original Xbox until seeing this GIF from Microsoft’s Larry Hyrb. It’s entrancing: it shows the history of the Xbox dashboard. Most obvious is the aesthetic shift, but, behind that, you can also get a sense of what was important to Microsoft at the time.:

I tweeted this out last year…but it's worth it again. Here are all of the major Xbox dashboards: OG Xbox, Xbox 360 and Xbox One pic.twitter.com/OWlyPj8qy9

It was the final resting place of Crimson Skies 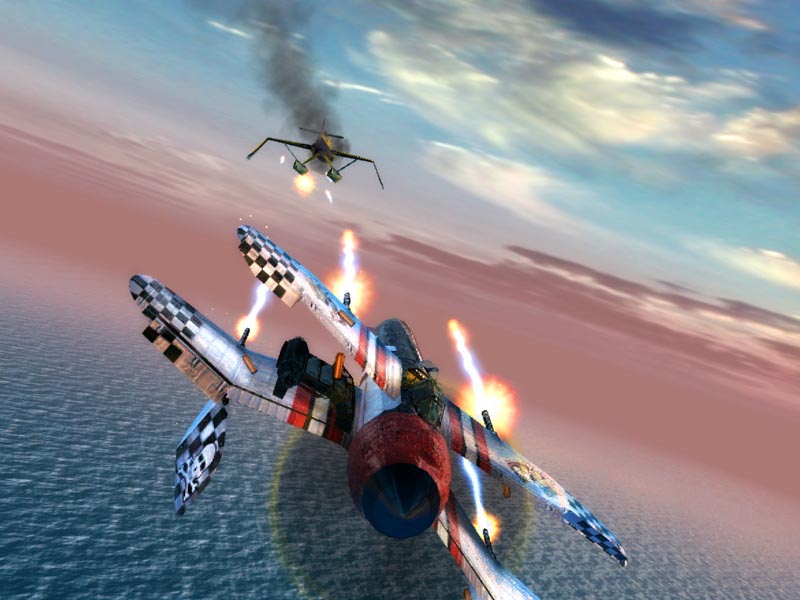 There are some great franchises on the Xbox that have spanned multiple generations of console, but it was an arcade game on the original Xbox that still warms my heart: Crimson Skies: High Road to Revenge. A reimagining of a more simulator-esque game on the PC, Crimson Skies put you in the pilot seat of a single prop plane in the sky with airships, early jet engines, and an awful lot of flak cannons.

While the Xbox may be known because of games like Halo, Crimson Skies showed off the console at its best. The world was made up of huge, colorful hub areas, filled with interesting architecture and hidden areas for you to discover by daringly weaving your plane between narrow rocks. It’s controls were perfect and responsive, its story full of humor, and its online multiplayer demanded and rewarded skill.

Crimson Skies can’t have sold well because there was never a sequel but that it existed was enough.

What Xbox Could Have Been Called

Buckle up folks. One of the real visionaries behind the Xbox was Seamus Blackley, who spoke to Edge magazine way back in 2003 about the making of the console – and how the name Xbox was eventually chosen.

“First there were our code names, which were WEP [Windows Entertainment Project], Midway, and DirectX Box [shortened to ‘Xbox’ in emails between the various project leaders]. When we got the first approval, Kevin [Bachus] was told we had to get a new name, because ‘xbox’ wasn’t legally sound, so against his judgement he did so, and got the phase two or ‘car’ names. These were so bad we didn’t even save them, but I remember making fun of one of them by calling it the ‘Microsoft Bunduss.’

“Then we got the ‘acronym’ phase from the naming geniuses. Here are a few samples of that crap.”

“Phase four was a battle between us and the naming guys, when we decided we just wanted to risk it and go with Xbox, since that’s what everyone called it anyway, and they wanted for some unknowable reason to call it ‘11-X’ or ‘Eleven-X’. Finally we told them no, but still had to decide: X-Box, xBox, XboX, Xbox, X-box, etc…”

We can but commend Mr Blackley’s instincts and taste. Among the crap, however, was one little glimpse of the future. The original Xbox would never be called this, of course, but the suggestion stayed in someone’s mind.