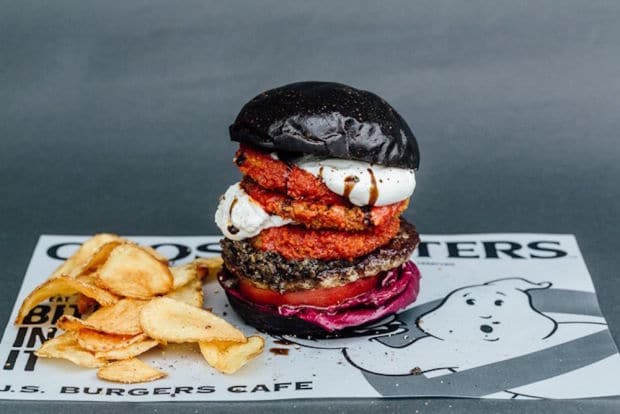 Not only will Ghostbusters: redux: sassy womens edition in all likelihood be a flop (but you’re sexist if you think that), promotional tie-ins look like failures as well. And yes, you’re a misogynist if you don’t like the tie ins.

While not approaching Fallout Boy levels of childhood ruining, it looks like these J-Pop stars were kidnapped and forced by Sony to make this video. They have the same vague sense of unease as Bill Murray when he’s plugging the new movie.

Mmmm, black died bun, marshmallow, and — wait, is that cabbage and tomato at the bottom? The strange red rings are still a mystery, probably pieces of my heart Paul Feig ripped out by screwing up Ghostbusters.

It basically speaks for itself.

Despite looking terrible for a Playstation 2 game, this modern masterpiece still costs $50.

I’m afraid of whoever unleashed this upon the world. What tone deaf Sony exec greenlighted this scourge upon the human race? Who is this sadist who thought Ray Parker Jr.’s masterpiece could be improved. And by Fall Out Boy no less? God help us all.

Also, the last one really did top off the rest of the grimey, unsplendid entries. FoB truly has been far worse than what any regular previously predicted.