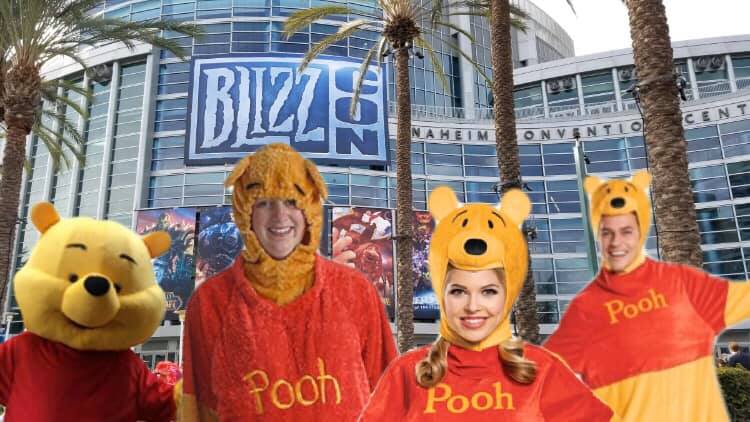 Everyone is expecting this year’s BlizzCon to be a shitshow of epic proportions, and for good reasons. Now it looks like the Blizzard/China hullabaloo is even going to result in an army of Winnie the Pooh costumed activists trying to force themselves into the event. Winnie the Pooh has been banned in China ever since someone noticed the bear bears a striking resemblance to Xi Jinping.

You may have already seen the many memes saying as much.

Furries, do you want to redeem yourselves in the eyes of the internet?

Go full Rainfurrest all over this upcoming Blizzcon.

Also consider this r/hongkong thread with over 26,000 upvotes encouraging everyone to “dress up as Winnie the Pooh or other pro Hong Kong/ anti China symbols to make it the worst possible experience for Blizzard.” 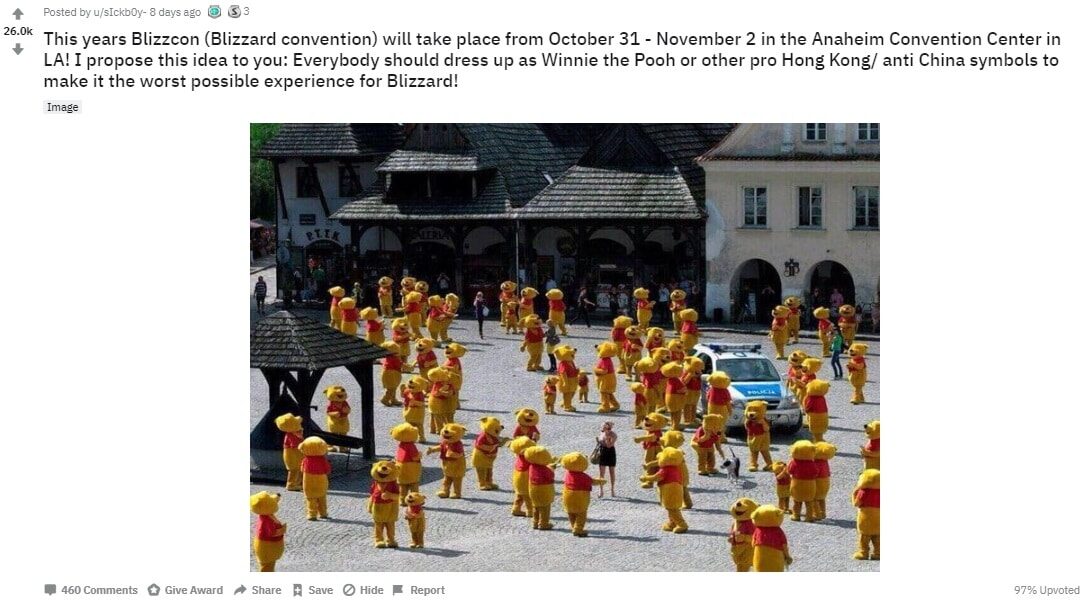 The thread’s OP elaborates in a reply:

I do not mean “Go buy Blizzcon tickets to demonstrate inside of the convention”, what I meant is that if you already have tickets then, instead of just not going you could use them to protest inside and everybody else that wants to protest should do so, but outside, to not financially support Blizzard any more.

But there is a problem with the plan. Blizzard’s has strict rules for BlizzCon cosplayers and will likely exercise their right to turn away costumes deemed offensive by the Communist Party of China.

That’s why this AllEvents.in events page is just outright stating it’s going to be a raid:

Winnie the Pooh raid on Blizzcon 2019

Come to Blizzcon 2019 and show your appreciation for the Chinese censors! Wear a Winnie the Pooh shirt, or at the very least bring the image of Winnie the Pooh and brandish it proudly! Blizzards Chinese investors can’t censor the entire event, or can they? Lets find out! Masks are optional but greatly encouraged. And of course, shirts or signs expressing solidarity with the protesters in Hong Kong will work just as well as Winnie.

As much as this sounds like a joke, and on the one hand yes it is an attempt at getting a good goof on Blizzard for their gutless actions of recent memory. This could also be both a way for people in the US to mess with the influence Chinese investors have over US companies, and to express a global solidarity and support for those protesting for democracy and against police brutality in Hong Kong.

We still have freedom of speech, so lets use it.

The events page allows people to click a button to mark their participation, but it doesn’t seem like the number is public. The same user has also created a Facebook event for the raid. This one currently has 49 people signed up as participants, with 258 marked as “Interested.”

Another Facebook event, titled Raid Blizzcon 2019 as Winnie the Pooh, they can’t ban us all, has 564 people marked as going and 1.1k “Interested.” When it was posted to r/me_irl,  it received 13,1k upvotes: 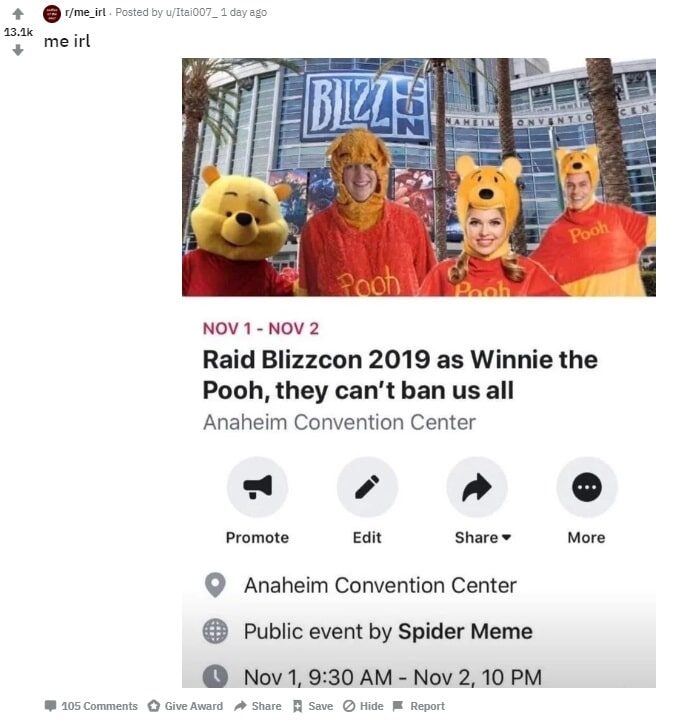 Crossposted or similar raid threads have also received 3k upvotes on r/hearthstone, 4,5k on r/Blizzard, and 18,1k on r/PewdiepieSubmissions.

We’ll keep the article updated as we get more information.

BlizzCon 2019 takes place at the Anaheim Convention Center October 31 through November 2. You can’t buy tickets any more, but it will be livestreamed.

I sent hotline about this bad illegal site! Good luck with Banned from China forever!

You must not do this disheartening action. Rather one must flower with positivism and cheerfulness.

Dude, shut up.
Let the disillusioned fiends have their parade, that is, the march and crowding against the establishment.

Guest
the hacker known as 4chan