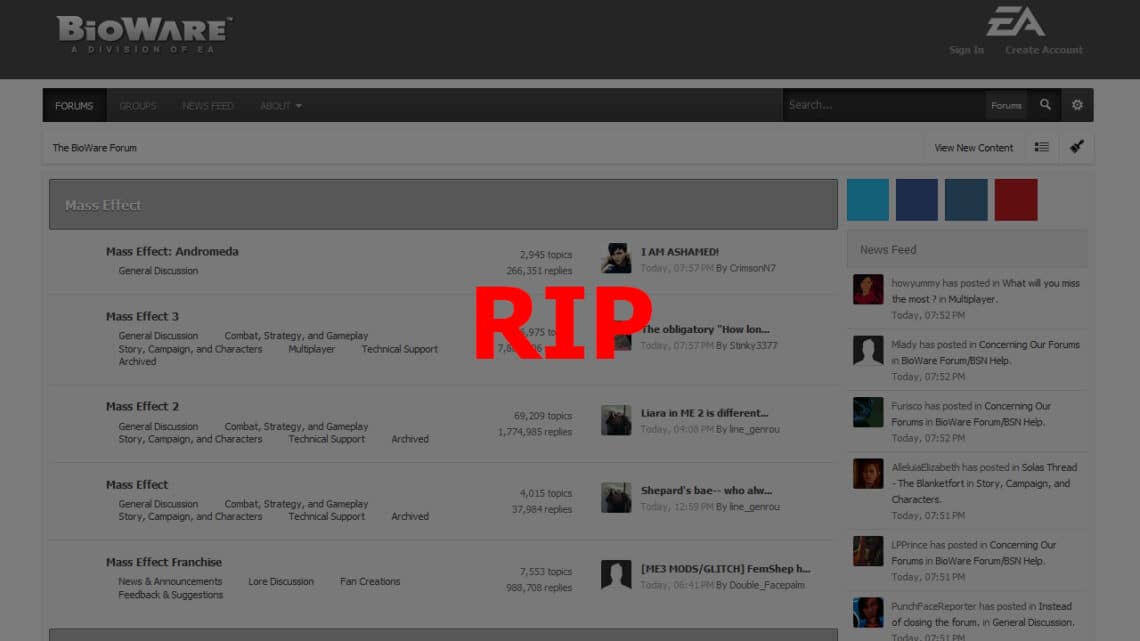 BioWare, the makers of Dragon Age, Mass Effect and numerous other role-playing games recently announced that its community forums will shutdown later this month.

After great consideration, we are closing down the BioWare forums, effective August 26, 2016. The Star Wars: The Old Republic forums will continue to operate; however, our public boards for Dragon Age, Mass Effect, and legacy BioWare titles will no longer be available.

This wasn’t an easy decision.

Our players are important to us. Your feedback, stories, and love for our games drive and inspire us.

In the past, our forums were the only way we could speak to you directly. They allowed our developers to talk with fans, and gave our players the opportunity to talk with each other about our games. But with the rise of social media and geek culture, there have never been more ways for us to connect.

In turn, you’ve built your own fantastic communities in places like Tumblr and Reddit. You’ve created comprehensive Wikis and countless pieces of fantastic art, fiction, and cosplay.

With so many great things so widely available, our developers today find themselves spending more time on other sites, and less time in our own forums. And to our fans and players who came to those boards looking to talk to us, it was a great disservice.

So it is with a heavy heart that we will close our public forums on August 26, 2016. We will maintain some private boards, and may use these in future for beta feedback or other special projects.

Because we know there is a lot of information on there you may want to keep, the public boards will remain in a read-only state until October 25, 2016. After that date, they will be taken down.

While we are saying goodbye to this venue, we remain committed to our community and will always be here to listen, share, and support you. Online and in person, we will continue to seek out opportunities to interact and share in our combined love of games.

The announcement was met with a poor response, with many posters expressing their disappointment across multiple threads. On the gaming forum NeoGAF, posters noted how redundant forums in general had become with the advent of social media, unable to see the irony of their sentiment.

While a few people are celebrating the venue’s shutdown as some kind of win due to the apparent “toxicity” of many of its threads, many of the studio’s fans are lamenting the fact that they’ll soon be unable to communicate directly with the developers or voice their criticism of the upcoming Mass Effect Andromeda, which is due for release early next year.

Platforms like Twitter and Facebook aren’t well-made for having in-depth discussions. And Reddit, for all that it’s worth, tends to turn most discussions into self-affirming echo chambers due to its voting system. Voices that go against the grain are often shut down. For the most part, forums like the one BioWare is closing are the perfect place for fans of the game to have discussions about specific issues within the games in self-contained threads with equal weight given to each post.

The studio took a lot of heat from its fans for how it handled Mass Effect 3 several years ago, and the forums were flooded with anger over the game’s dismal ending. In response to consumer outcry, they rewrote the original ending with an expanded version that better explained the story.

More recently, BioWare fielded criticism for its embrace of social justice themes in Dragon Age: Inquisition. Whereas headlines praised the game for its inclusion of the “first gay character in an RPG,” gamers on the forum were quick to note the inaccuracy of the hyped-up claim, as previous titles developed by the studio—as well as other game companies—featured gay and lesbian characters with very little notice. Many gamers also decried how preachy some of the plot lines and dialogue were, to the detriment of the whole experience. Social justice issues had never been central to BioWare’s previous titles, but in its latest game, they were at the forefront. Gamers are already expressing fears that the upcoming Mass Effect Andromeda will be a lot worse in that regard.

On the other side of the spectrum, some gamers are worried that unpopular topics pertaining to gay characters would be instantly downvoted on most gaming subreddits. It would be impossible to discuss certain issues outside of closed spaces. Either way, the lack of any official forums spells the death of user feedback no matter which side you’re on.

It’s also important to note that consumers will have nowhere to go to report bugs and solicit technical support for the games, should they run into any issues. In contrast, consumer-friendly developers like CD Projekt RED, which made The Witcher 3, offers active community forums and even an official submission page for bugs and suggestions on how to improve their products—and much of this feedback was implemented in free updates. Official lines of communication allow consumers to feel heard and provide them with a sense of ownership over their hard-earned purchases.

Clearly, BioWare intends to leverage the social media hype machine to better promote their future games, but they’re doing so at the cost of sacrificing direct feedback from consumers. And by closing the forums, they’re also able to ignore any negative responses. The studio would look bad if feedback was being ignored or actively censored by company employees on the official forum. But with social media and Reddit, the developers can ignore what they want without taking the PR hit.

Furthermore, by forcing most of these discussions to take place in fan-operated subreddits, the studio can instruct moderators to stifle criticism while keeping their hands clean. Even a mere suggestion to “keep the place clean” would be enough for most unpaid moderators to fall in line. That a game company would dictate how subreddits are run is not without precedence. Game journalist Richard Lewis uncovered a close relationship between Riot Games, which makes League of Legends, and the subreddit dedicated to the game.

There is no evidence suggesting that BioWare will do the same, but the quality of the discussions and content will depend on how these communities are managed—not that it matters whatsoever if the developers themselves make no effort to participate in the discussions or respond to criticism.

Ultimately, BioWare’s decision to close its forums will make it unaccountable to consumers, and that’s not a good thing.