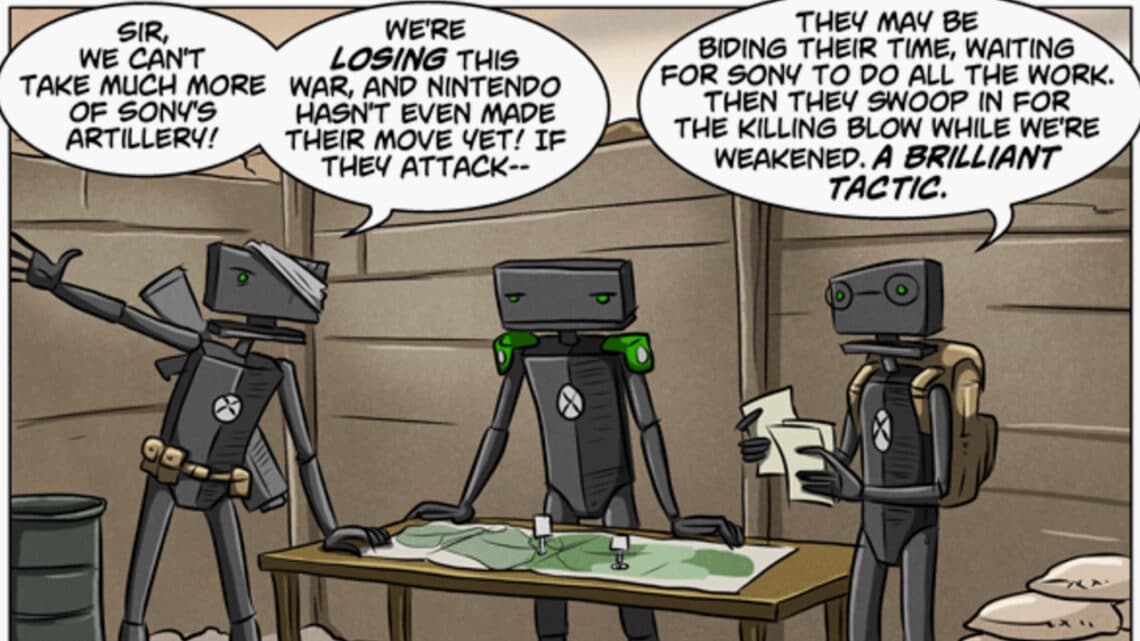 Oh guys, guys, what happened? You used to be cool. There was a time when buying a console got you onboard with a world of gaming that could reasonably be expected to last a generation (in silicon terms). Fanboys would argue until they were blue in the face as to why their console was the clear and obviously superior machine and nobody liked the rich kids who smugly proclaimed that they had all of them.

These days buying a console sets you on a dark, dark path. Gone are the days of plug and play gaming. Now we live in an era of always online, advertising on your frontend (in my day there was no frontend, just the game that was slotted into the cartridge slot), on-disc DLC and – shudder – season passes.

I could happily write an essay on how much I hate season passes, pre-order bonuses and all the other garbage that has overtaken the industry and made gaming an ever-increasing cesspool of attempts to extort more cash from the gamer, but you’re spared that today. Not for any positive reason, though, but because the console manufacturers have decided to make matters even worse.

They have achieved this near-impossible feat by borrowing the little-loved model of refreshing the product line that has plagued the mobile space for some time. This is the business model that takes a perfectly usable piece of hardware – an iPhone, say, to take a non-weighted, random example – and then adds features that the user does not need, like a faster CPU or a pointless upgrade in pixel density. Since us users are collectively a pretty brainless bunch, we all look at the new phone, tell ourselves it’s shinier than our current model and that we simply must have it, and then go and drop a lot of money on this refreshed product, complete with a nice new long-term contract.

The phone manufacturers are laughing all the way to the bank. The network operators are loving it. Most tragically, though, the consumers seem happy to have been shafted. ‘Look at my shiny new phone’ they will say ‘it boots up six seconds faster than your old piece of junk’. Yes. Yes it does. And what good exactly does that do you?

And so we come to consoles. The PS4 has been out for some time now and the Xbox One has been playing catch-up all this time. Those who follow the scene will already be familiar with the narrative for this: the utterly botched Xbox One launch window, the PS4 lining up hit after hit, then Xbox fighting back from their nightmare start to become quite competitive.

It was a classic console war scenario, playing out just as it had since the days of the Atari vs Amiga. But then some executives took notice of Apple’s profits and had their big idea: why not copy that model and make the consumers buy the same product over and over? And lo, they did look upon this idea and they saw that it was good. Well, good for their bottom line anyway. It’s bloody awful for us.

In case you missed the reports, both Playstation and Xbox have lined up new models. For PlayStation, it’s the Neo. This will provide roughly a 20% boost in the overall grunt of the console. It had been thought that this new model would exist to facilitate the upcoming PSVR but current reports say that the refresh will have no impact on the imminent VR hardware, which comes with its own components as part of the hardware to ensure it runs on all systems. No, it looks like the refreshed PS4 is just refreshed for the sake of being shinier.

Xbox have gone a step further. They have two refreshes in the pipeline. One is touted as a slim model, but nonetheless comes with upgraded components inside it. Then in 2017 we will see the model that is currently codenamed Scorpio. This is a full-on refresh with new architecture, more memory; basically it’s a completely different piece of hardware to run the same games on.

And so to the big question: why? Why bother with these refreshes at all? The cynic in me expects this model to lead to an awful sea change in how console games are made. Right now, any refresh of a PS4 or an Xbox One will still be tied to their original starter unit. Right now, manufacturers can’t get away with saying games will only work on Neo or Scorpio. But make no mistake: this is the path we are now travelling.

The only reason to keep churning out new models is to shorten the lifespan of a console. Got an Xbox One? Well tough luck because now that box you paid $400 for two years ago is worthless. Best get a Scorpio or you won’t be able to play Halo 6. What’s that? You want to trade in your old machine for the new one? Sure, we’ll give you $50 off. That’s only $450 for the Scorpio now. Bargain!

Don’t delude yourselves. We all know it’s coming. This is bad news for game developers who now will have the threat of constantly moving goalposts to worry about. They will have to plan for 2 or 3 versions of the same game with every new project which will further increase the bloat associated with making a top tier videogame. It’s also bad news for us gamers as we will have to reach into our wallets more and more frequently if we want to keep up to date.

But perhaps worse is that it’s bad news for console gaming as a safe bet. You buy a console so that you know where you stand. I bought my console to gain access to the games library it would provide me with. This new policy from the manufacturers means it’s only a matter of time until we see the message that a game requires Model X or higher. On that day I will be getting out of console gaming as it will have no advantage whatsoever over gaming on the PC.

I wrote a book. It's pretty good, dirt cheap and you should read it.