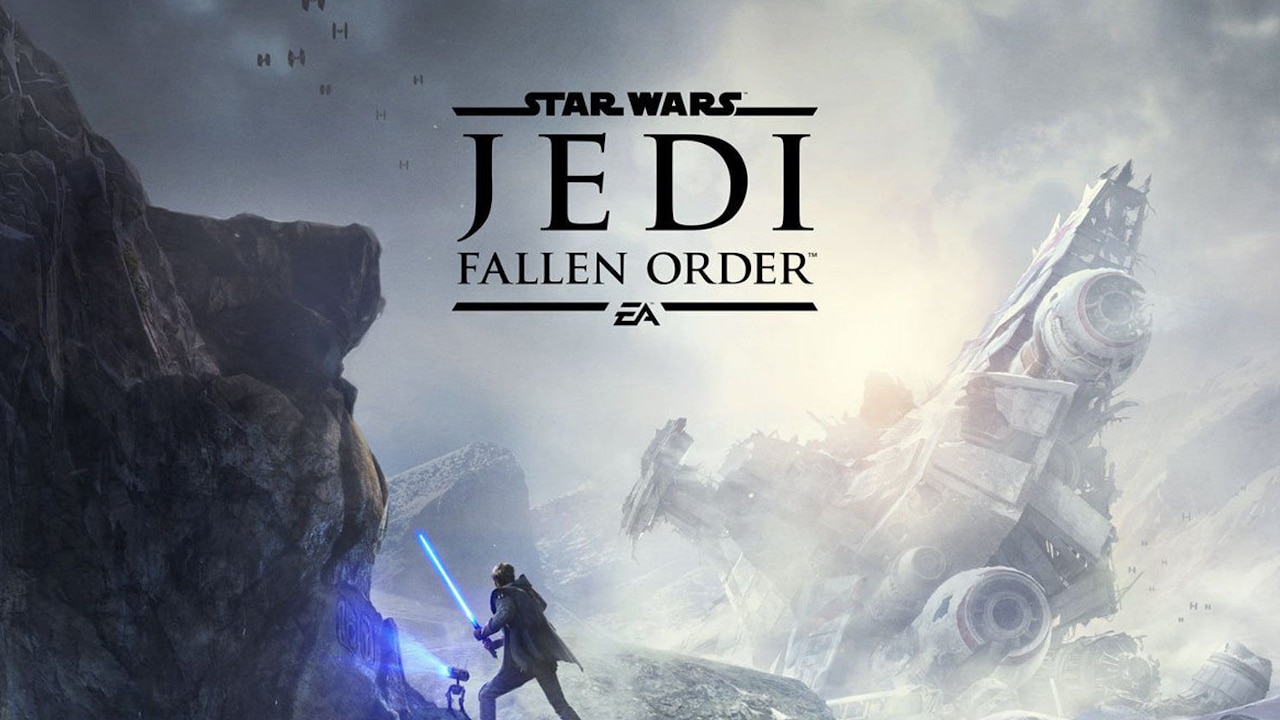 From mobile cash grabs to lackluster multiplayer games that feel more like reskins of Battlefield than games with their own character, Star Wars as a video game franchise struggles to attain the relevance it once had.

Gone is Knights of the Old Republic, one of the best role-playing games of all time, and arguably BioWare’s greatest production. Old school gamers will even recall X-Wing vs. Tie Fighter, which paved the way for masterpieces like Descent FreeSpace 2 and Freelancer. And who could forget the Jedi Knight games, which brought lightsaber duels to the PC? Needless to say, Star Wars has had its greats, but the only games we’ve had since then, thanks to EA Games, have been an MMORPG that struggles to be like World of Warcraft, the new Battlefront revivals, no mention of the canceled Star Wars 1313, which will never see the light of day because EA didn’t, at least for a time, believe in the success of single player games.

Single-player games, in spite of a few people who claim otherwise, are tremendously profitable. Just look at God of War, Spider-Man, The Last of Us, Sekiro, Resident Evil 2, Devil May Cry 5, and so on. All the games sold incredibly well, and their main draw was none other than their single-player campaigns.

The reason I bring this up is because former Game Informer writer Mike Futter decided to weigh in on the topic in a series of tweets that have since gone viral. Futter decided to attack gamers, because why wouldn’t he? The gaming press is, for whatever reason, keen to maintain a combative relationship with its own audience even as it declines in relevance. 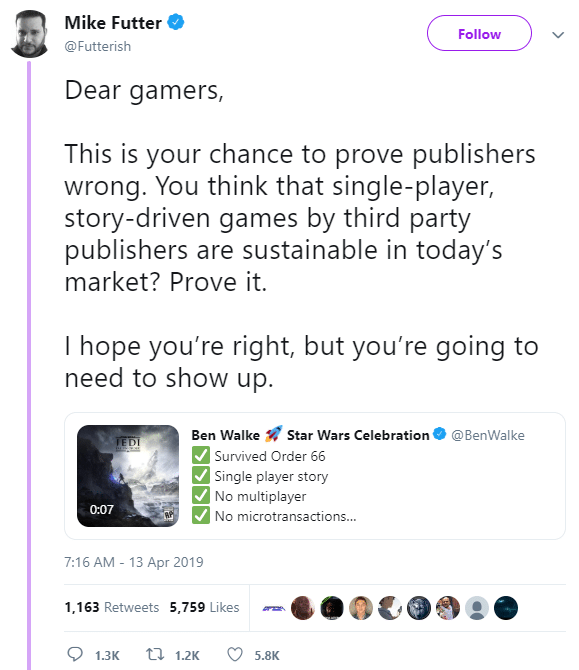 He starts off by accusing gamers of not putting our money where our mouths are, as if games like Nier Automata, Assassin’s Creed Odyssey, Dark Souls, DOOM, Skyrim, Fallout 4, Devil May Cry 5, The Witcher 3, and innumerable other single-player games are incapable of selling well. Also note that he mentions “third-party publishers” meaning anyone besides Sony, Nintendo and Microsoft, as if to say “gotcha!” if anyone were to bring up God of War. Every game I just listed off was published by a third-party publisher.

He continues by saying: “Of course it needs to be good. This is Respawn and Stig Asmussen. I believe both have earned the benefit of trust. As for EA publishing. I think you underestimate Vince Zampella’s clout. It’s already showing: no microtransactions.”

No one’s underestimating Vince Zampella. He made Apex Legends. He also made Titanfall and Titanfall 2. And Call of Duty 4: Modern Warfare. No gamer worth their salt is going to say, “Hey, who’s that guy? Does he have any clout?” No, we know who he is. The only person assuming we don’t is Futter, who appears to be projecting some form if ignorance onto the rest of us like we’re cretins with low IQs.

He’s not finished, so he adds, to no one in particular: “Because I apparently need to clear this up: Spidey and God of War are first-party. You can stop citing them. Sekiro is a good exception to the trend of SP-only games falling short. RDR2? That has multiplayer and microtransactions. Might not have GTA 5 and GTA online’s legs, but it will bring in recurrent dollars.”

What about Skyrim, though? Or DOOM? Or Nier Automata? You could argue that they had some limited multiplayer or microtransactions but I can hardly think of anyone who decided to buy The Witcher 3 because of the promise of two full bodied expansion packs. Much like the DLCs for Skyrim, they bolstered the sales of The Witcher 3 because people simply wanted more of the same single-player experience. Jedi Fallen Order might be a one-off story with no expansions, but that’s not going to stop anyone from buying it. After all, God of War doesn’t have any DLCs and it sold amazingly well… but we’re not supposed to bring that one up, are we, Futter? You’ve set up the rules so that no game being cited can prove you wrong.

Futter keeps going. He says: “OK. Here we go. Games as a service is the current hot trend because of recurrent spending. For many games, microtransactions quickly overshadows revenue earned from initial purchase and/or provides sustainable revenue tail. Fire-and-forget single-player experiences monetize once. Publishers get your game purchase dollars (and maybe large-form DLC buy-in). The gap between revenue on games-as-a-service and one-and-done games is massive and has changed the definition of “success.” You want more single-player/no microtransaction games? They have to be successes by current definition (and not what success looked like last gen and before).”

Right, so no amount of citations or corrections will ever please this guy because success is, in his own words, defined by him and him alone and no one else. In the face of games like League of Legends and Fortnite, every game looks like a failure, don’t you know? That’s what Futter’s measuring the success of single-player games against, which is quite frankly bullshit. Not every game has to draw in a billion dollars to be a success. One-off games like God of War may not make as much money as Fortnite, but that doesn’t mean they aren’t successful. They draw a profit, and it’s more than enough for them to justify the creation of a sequel, or even multiple sequels. Sometimes, game developers want to produce a game with a beautiful story and well-developed world—you know, like a work of art, and not just a cash cow for them to milk for years on end.

That’s a good thing, Futter. Guys like Mike Futter might not appreciate art, and all they see is how much money a game can make, but for those of us who play games for the story and the immersion, something like Jedi Fallen Order is a godsend.

Find out more in less than 24hrs pic.twitter.com/mM2viEk2xv

Well, it’s been more than 24 hours since then and the game’s first story reveal trailer is out. You can see that playing in the background. A day after the reveal of Star Wars Episode IX, EA Games released the official trailer for the game, which they first showcased at the Star Wars Celebration during the Jedi Fallen Order live panel stream. It shows off quite of the game’s story and some of the major characters that populate it.

The trailer follows the protagonist, Cal Kestis, as he tries to survive in a galaxy that’s condemned all Jedi to death following the events of Revenge of the Sith. The Empire is victorious, and only few Jedi, like Cal, remain.

Written by Star Wars Knights of the Old Republic 2’s Chris Avellone and developed by Titanfall studio Respawn, the game sees Cal doing his best to stay beneath the Empire’s radar by working as a salvager. Some bad things happen and his cover’s blown, which leads to Cal being hunted down by the Empire and Darth Vader’s inquisitors.

The game caught my interest the instant I heard who was making the game. Titanfall 2 offered one of the best single-player campaigns for an FPS that I’ve personally ever played, and knowing that the studio that also made Apex Legends is behind it definitely bodes well for the gameplay. Gameplay and design by Respawn coupled with Chris Avellone’s writing talents means Jedi Fallen Order has the potential to be a damn good Star Wars game, if not a damn good game in general. Worth noting here that Avellone didn’t just write KOTOR 2, though. He also made New Vegas, Prey, and Planescape Torment.

Furthermore, knowing that the game will be single-player only and offer neither microtransactions nor pay-to-win mechanics is a huge positive, especially in light of so many games these days trying to take advantage of their customers. It’s refreshing to see a developer like Respawn respect its audience, and it’s surprising coming from EA Games. Could this be a new milestone for EA and Star Wars in video gaming? I guess we’ll have to wait and see, but things are looking up.

There’s a lot I want to see out of Jedi Fallen Order as Respawn reveals more information about it, and I’m here for it.