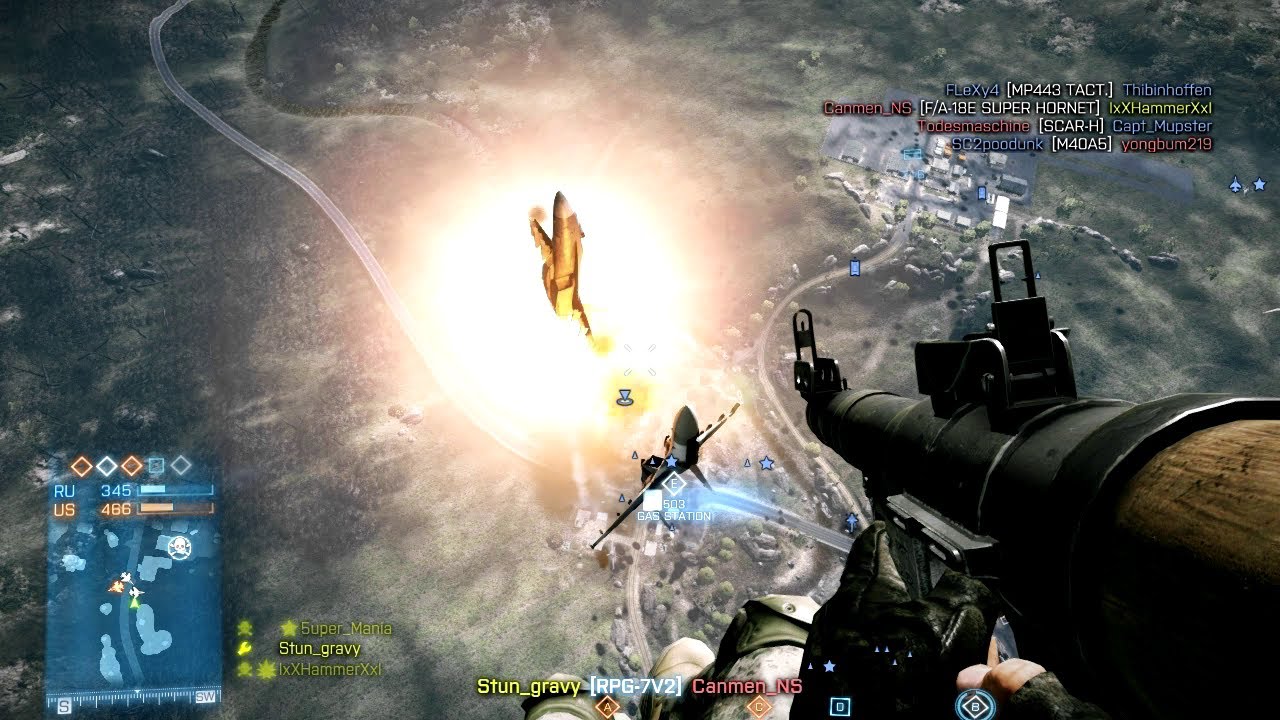 Video games: how much do we love them? Enough to inspire us to devote a good chunk of our lives to them, at the very least. The incredible world of electronic gaming has something for everybody, from the base casual to the most hardcore multi-monitor Eve Online sock-pooper. We're going to be talking about the upper echelon of gamers in this piece: the men and women who don't stop at mere enjoyment and instead fight for utter mastery. These are people who squeeze every last byte out of their games, twisting them under their mental strength until they crack.

These 11 videos show people taking ordinary video games and making them truly extraordinary. Whether it be unreal difficulty settings, unconventional input devices or just truly master-level play, these gamers are all heroes.

First-person shooters are still one of the most popular genres out there, so it's not surprising that they've spawned some pretty insane situations. This short clip from Battlefield 3 combines incredible skill and dumb luck into one unforgettable moment, as player Stun_Gravy finds himself under fire while piloting a jet, presses his Eject button, takes out the jet that was attacking him with a rocket launcher, and then lands back in his plane's cockpit and resumes flight. That's a stunt that would be ludicrous in a Rambo movie.

Treasure's polarity-flipping shooting game Ikaruga is widely regarded as one of the genre's greatest titles, with beautifully-designed levels that work great for solo or co-op play. That co-op feature is what brings us to this next video, which features Japanese player VTF-INO using two joysticks to control both players at the same time. The amount of reflex skill and visual acuity to do this is unbelievable. There's a whole culture of "double play" videos of shoot-em-up games, but this was one of the first and it's still stunning to watch.

Most of us, when we play a game, generally try to do it in the way the designers meant it to be played. Scott Buchanan is not like most of us. The veteran gamer has set himself the challenge to beat levels in platformer classic Super Mario 64 without once pressing the jump button. Mario without jumping seems completely wrong, but you'll be flabbergasted when you watch this video and see how he gets up to high locations by using an item duplication glitch to make a massive staircase of Goombas stretching to the heavens.

Professional gaming is still a fairly male-dominated field, which adds a little bit of pleasure to this video. World-class Soulcalibur player Kayane appeared at the Paris Manga festival in 2013 to take on all comers, but the competition wasn't up to her standards, so she decided to make things a little more interesting and not look at the screen while she whooped ass. Soulcalibur players know that the game makes very distinct audio cues for different attacks, and by listening carefully and watching the crowd she pulled out the win.

Blink and you'll miss the action in this world record-setting Tetris video, which is just a hair over 30 seconds long. Players of the classic Russian puzzle game have developed insane reflex and pattern recognition skills, but this run by MicroBlizz on the game's "40 line" mode, which challenges players to clear 40 lines in the shortest possible time, is insane. Note that this footage has not been sped up or altered in any way. The dude is really dropping blocks that fast, and it's pretty amazing to watch.

Some games aren't meant to be "won," per se. They'll just keep going and going until the player gets bored. But for Sim City 3000 player Vincent Ocasla, that wasn't an option. He took Will Wright's legendary city-planning game and set out to play a "perfect game" of it, creating a city that boasted six million residents. Ocasla spent four years of his life developing the strategy behind "Magnasanti," plotting it out on graph paper and calculating out exactly what it would take to build a city with absolutely no wasted space or resources. The end result is both amazing and scary.

Dark Souls is already recognized as one of the most punishingly difficult games of the last console generation, a uniquely grim medieval fantasy that features bone-crushing combat and forbidding environments. So, what would drive someone to make the game even harder by playing it with the bongo controller from Donkey Kong: Jungle Beat? Our vote's on sheer insanity, but Benjamin Gwin's not telling. After customizing the controller to work with his PC, Gwin managed to get through the entire game in a little over five hours. He's also done it with a Rock Band guitar controller, because why not?

Retro gaming fans know that the Tecmo Bowl series was the pinnacle of 8-bit football greatness, mixing fast-paced arcade action with your favorite players. In this insane video, a player takes control of Bo Jackson at the opposing team's 1 yard line, grabs the handoff from the QB, and then does something so ballsy it'd make highlight reels for decades to come. Bo grabs the ball, runs all the way downfield to his own 2 yard line while dodging defenders, then decides to style on them by running it back again to the opponent's 2 and one more time downfield for a TD. It's a spectacular feat of virtual sports, and Bo knows that for sure.

In many ways, fighting games are some of the purest forms of electronic entertainment. Two fighters face off directly with no distractions, and the best reflexes and decision making wins. The all-time greats have incredible knowledge of their chosen game's mechanics, allowing them to pull off inhuman feats. Case in point: the Evolution 2004 tournament, where Japanese Street Fighter master Daigo Umehara performed 15 parries of Chun-Li's super move in a row, each one requiring a reaction time of 1/15th of a second. This is still considered to be one of the most insane fighting game moments of all time over a decade later.

There's a whole cottage industry of people using tools to create insanely hard Super Mario Bros. worlds, across many different games. One of the most infuriating is the Item Abuse series, which require pixel-perfect perfection and some deeply unintuitive usage of the game's many items to complete. This speedrun of the third and hardest of the Item Abuse levels is incredibly nerve-wracking to watch, as the player makes his way through a minefield of danger without even a mushroom to help him along the way.

The Elder Scrolls games are notorious for packing in an insane amount of content, with huge landmasses to navigate through, thousands of characters, and hundreds of side quests. Even the best players take several days to beat them, so when a dude managed to get to the ending of Morrowind in a little over four minutes, people stood up and took notice. The gamer exploited a glitch that allowed him to infinitely replicate stat-boosting items, turning himself into a death-dealing juggernaut that sped to the final enemies and struck them down in a single blow.

The internet is rife with videos of insane video game feats, and whether tool-assisted or not, they're pretty incredible. Just be careful not to start browsing on a work night — it's a deep YouTube hole to fall down.