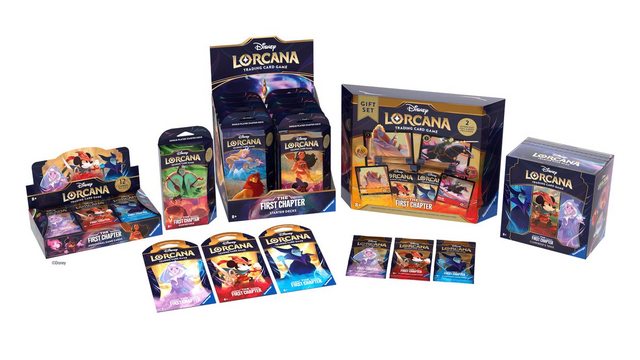 No card game has captured the interest of players and collectors alike more than Ravensburger's upcoming Disney card game, Disney Lorcana. Now, Ravensburger announced that the card game will be released this year starting in August 2023.

IGN has learned exclusively that Disney Lorcana will be released in the United States, Canada, United Kingdom, France, and Germany starting this August with Disney Lorcana: The First Chapter.

At launch, over 200 game cards will be available in various products including starter decks, booster packs, a gift set, and the "Illumineer's Trove."

There will be three different Starter decks available at launch, each with a specific list of 60 cards in two of the six "inks" which include Amber and Amethyst, Emerald and Ruby, or Steel and Sapphire. Think of them as different colors in games like Magic: The Gathering. Starter decks will also include one booster pack with 12 randomized cards, with one foil card and two cars with rare, super rare, or legendary rarity.

The Illumneer's Trove is set to be the biggest collectible set at launch, which will include eight booster packs, two deck boxes, a player's guide, and a themed storage box. The gift set will feature Mulan and Hades, two oversized foil cards, two foil game cards, four booster packs, and game tokens.