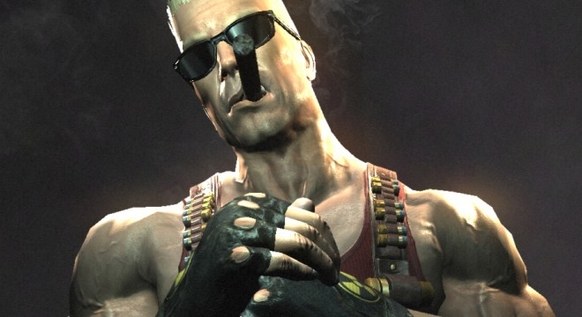 The body’s still warm, yet some are already dancing on the coffin. With 3D Realms dissolved, and its flagship project Duke Nukem Forever abandoned, some pundits aren’t stopping at declaring the Duke Nukem franchise dead. If these beard-stroking sages are to be believed, the action gaming genre itself is finished.

Let us be clear on this: DNF was a sick joke — a bloated, doomed, monstrosity of a project. Like Sydney’s Cross City Tunnel, or every attempt Michael Jackson makes to rebuild his career. Or his face.

But Duke Nukem himself still has legs. The character has a raw, irreverent appeal. The Duke speaks for all men, for his arch enemy is not some alien tentacle monster, but Political Correctness.

His IP still has value, and with the right development team, his sexist, steroid-abusing antics could live again. As a wise man once said: “Duffmam can never die — only the actors who portray him!”

This fact eludes the self-appointed cultural guardians of gaming, always eager for a chance to get on their high horse.

Earnest Cavalli over at Wired asserts that Duke Nukem, like the great 80s action heroes, is obsolete. “Let the Duke rest in peace, an antiquated hero for simpler times.” Cavalli believes that gamers don’t want him anymore, because they’ve grown up and moved on.

Hogwash. It’s true that Hollywood no longer makes 80s-style action movies, but that’s only because Hollywood executives have no idea what they’re doing. They have forgotten that they must give customers what they want.

If people now hate action heroes so much, why did The Transporter and Crank get sequels?

Movies like Shoot Em Up still succeed because while snooty film critic tastes have changed, human nature has not.

To be perfectly blunt, human nature has not changed since ancient times. Sure, our society now has ‘rules’ and ‘laws’ — we can’t go over the hill and get into biffo with our neighboring tribes any more. That’s why they invented Rugby. It provides an outlet for our tribal instincts, one that (usually) prevents the gutters periodically running red with blood.

Again, the self-styled arbiters of decency just don’t get this. Leave it to the ABC to be surprised that rugger has an entrenched culture of binge drinking and orgiastic group sex. Rock & roll excess is not some tragic distraction from the noble art of football. It’s the whole point!

Why else are young men so motivated, so driven to excel in sport? For the satisfaction of a job well done? Get real.

While we’re on the topic, traditional gender roles are proving to be indestructible. That’s because gender identity is not some devious invention of the patriarchy — it is determined by brain structure. Science has proven that boys and girls know that they’re boys and girls even before they’re born. And once they’ve emerged, DS games like Cooking Mama and Science Papa are waiting for them.

No, mankind’s glorification of sex and violence cannot be created or destroyed; it only changes form. James Bond has evolved with the times, and so can the Duke.

The legacy of Duke Nukem – Ganker

[…] Also check out: Duke Nukem Forever may be dead, but the Duke is indestructible. […]

“If people now hate action heroes so much, why did The Transporter and Crank get sequels? ”

I wouldn’t call it heavy, but nor do I think people could mistake him for anything else but English.

hes all but dead there still working on the psp titles, wich will be interesting to say the least.
but if there going to see him off the only proper way they can do it is in a hollywood blockbuster, the movie has been delayed almost as long as the game.

PSP and DS. PSP version looks easily the best, though. Why can’t either be first-person though?!

Hear hear, Cottee. Well put sir, you politically incorrect man you (where do I sign up to join the League of Political Incorrectness?).

I thought the same thing when I read Cavalli’s argument against Duke. For while audiences may have gotten used to the idea of having ambiguous villains and sensitive heroes, every once in a while a Rambo comes along to show that we still love the bloody awesomeness of evil villains and stoic heroes who kick ass and take names.

Maybe the Duke we know and love is dead, but that doesn’t mean that his spirit shouldn’t live on.