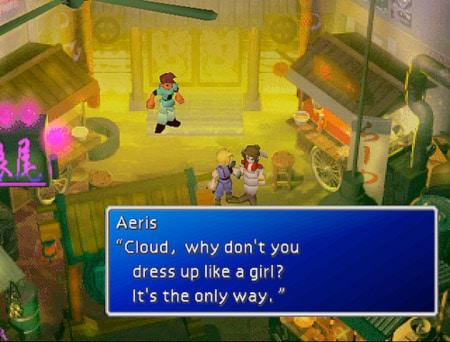 Remembering classic videogames is exactly like remembering losing your virginity to a unsavory mate: your memory tends to omit the awful parts. As such, many videogames regarded as "classics" or even the "best ever" have awful, embarrassing parts tucked away in them. Parts so dumb, many gamers have blocked them out of their mind (not unlike their first at-bat in Little League). We've called out five of the worst offenders for being great games that still had bits which made us bitterly ashamed to play them.

Ask console RPG nuts what the best game of all time is and they'll say "Final Fantasy VII" with some frequency. Solid game play, huge explosions, and one giant-ass sword.

Ask these Cloud supporters if they enjoy dressing up as a classy dame and trying to seduce their way into a pimp's headquarters. Well, they'll still probably say "yes," but with a deep sigh.

That's right, after blowing up reactors with Mr. T, the game decides the only thing more fun would be making you dress up as a pretty lady. The whole rigmarole of deciding which accessories are prettiest takes like an hour. This is a main quest, which must be completed to further the plot.

The cross-dressing goes ridiculously in-depth, allowing you to pick out perfume, a dress, a tiara, a wig, and an undergarment. All this in hopes of seducing a rich fat pimp. We strongly suspect a new game designer completely misinterpreted the "fantasy" part of "Final Fantasy."

Every damn thing in Zelda involving a whistle or a flute

We like Zelda, as we have a pulse. Who wouldn't love hacking up monsters with swords and bombs and boomerangs, finding secret passages, and convincing a hot princess to bone you?

Nearly every incarnation of Zelda makes us stop having fun and start playing a recorder flute like we're at a freaking fourth grade band recital.

This offense dates back to the original Legend of Zelda, where a whistle blow summons a stupid annoying tornado and also makes a lake give you a dungeon. How about we just bomb the lake, or stab the lake, or anything fun that's not totally stupid? We buy Zelda for the action-adventure, not because we're secretly hoping for more mandatory Flute Hero mini-games.

Of all the magical accessories to give a character, the flute ranks down there with "super farting juice" or "a knife that explodes when you stab someone." Just off the top of our heads, we can think of three manlier ways for Link to harness the power of wind and time:

Link has a magic James Bond watch where the dial is a functioning windmill. Whenever Link starts hacking up a grave, the winds get pissed at his desecration and deposits him in another area/dimension.

Seriously, the flute's evolution is holding back any serious attempts at dong-based transportation in videogames. Yet Congress refuses to hold hearings regarding this subject.

The pure thrill of sneaking around and snapping necks sent more testosterone through pre-pubescent 1998 teens than Cindy Margolis.

When you first meet the psychically powered Psycho Mantis everything seems cool. He takes control of your buddy, forcing you to knock her out. Nothing stupid, there, right?

Mantis then pretty much tries to impress you by acting like a magician at a children's birthday party. A craptacular magician. First, he lists the Konami/Nintendo games on your memory card, to prove he can "read the player's mind." But even this isn't as stupid as his big quarter-behind-the-ear trick: moving your controller with his mind.

How is this accomplished? The player is requested to place their controller on the floor. Then, the controller vibrates. Psycho Mantis claims this is done with his mind. Naturally, everyone's first thought upon seeing this is "wow, I can have freaky mental-vibrator sex with Psycho Mantis if I stick the controller down my pants." This is followed by intense sorrow and pity for Mantis, the programmer, and the game designer. Also, extreme pity goes out to this YouTube commenter:

...when I got to the Psycho Mantis boss. I got scared because when he said he was going to move the controller, and when it moved... I screamed for my life and ran to my big sister and told her what happened. And when I showed her it, she freaked out too.

So, thank you, Metal Gear Solid, for making us feel like hardcore men right up until you revealed that we were playing a game meant for seven-year-olds.

When it comes to proving you're a man, a real fire-spitting man's man, nothing beats playing the crap out of Grand Theft Auto. Well, except actually making a woman, but stick with us, here. Known to be the Theodore Roosevelt of badass games, Grand Theft Auto is perfect for any red-blooded man who wants to hunt the greatest game of all. Right? Right?

Mandatory gay date for no other reason than casual pleasure.

Don't get us wrong, we're not saying there's anything inherently wrong with the homosexuals. In fact, there's an entire GTA game titled after a gay character. But, if you're playing Grand Theft Auto in hopes of going on a gay boat ride, there are simply much better games.

You see, after the main character nobly helps his buddy Bernie with a few quests, Bernie asks him out on a boat ride, just the two of them. Sure, it may sound innocent but... well, no actually it's totally gay:

Okay, yes guys with guns eventually came into the picture, but Niko had no idea, he really thought it was just going to be a relaxing day checking out men at the docks. This is a main quest that you can't refuse. It's like The Sims 2, if all your characters automatically turn gay halfway through the game.

One of the best hockey games ever, Blades of Steel was unique at the time for its graphics, sound, and play control. It was also well-known for its fight system, where the loser would head to the penalty box. Fighting, checking, plus an awesome Gradius mini-game after period two made this one of the true manly games of the 1980s.

Sometimes, you wouldn't get to play the awesome Gradius mini-game after period two. Sometimes, you were greeted with an animation of a warm, fuzzy teddy bear wearing a stupid sweat suit:

Warm fuzzy-wuzzy teddy-weddy scores the goal, and compliments himself like a conceited dick.

For those of you keeping score at home, the Gradius mini-game is skipped because some cocky teddy bear wants to show off for an audience whom he believes to be three-years-old. After seeing this, we never had the urge to punch any of our opponents for the rest of the game. We did have the urge to punch whoever decided that this dipshit polar bear shouldn't be a boss that we get to blow up with a tiny spaceship.

So, the next time the game you're playing has a part that really sucks, remember that even the classics have their warts. Their hairy, flute-playing, teddy-bear cuddling, cheap-parlor-tricking warts.