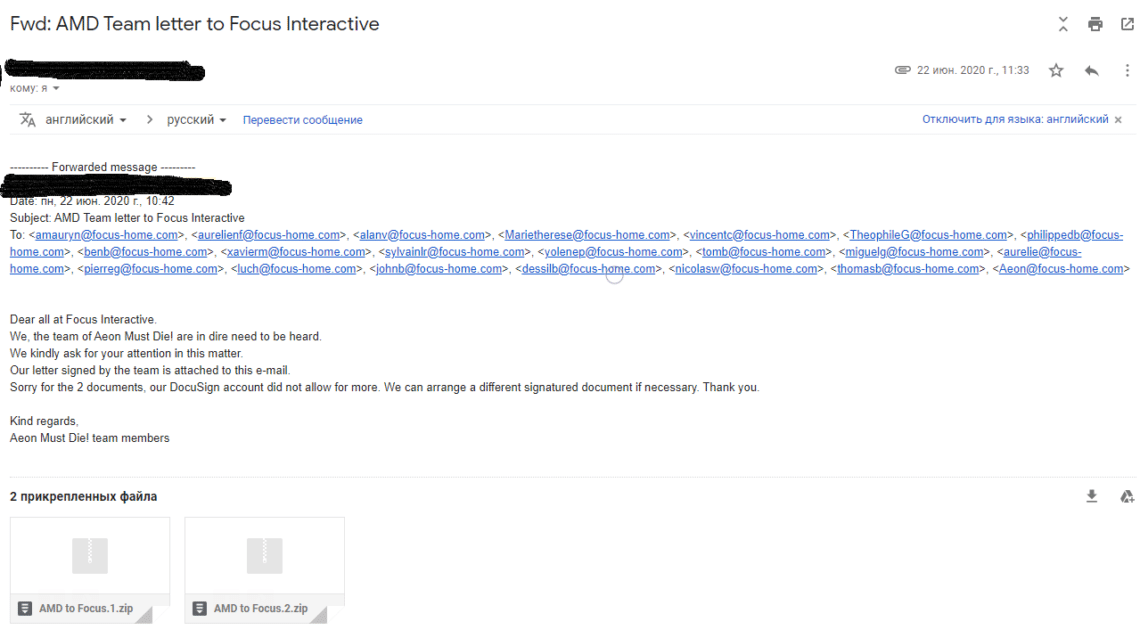 Focus Home Interactive says it’s looking into “serious allegations” levelled at the studio behind Aeon Must Die!, after the entire dev team quit over “psychological abuse and dehumanization” from their employer. In a statement on Twitter last week, the publisher said that it was “carefully looking into these allegations.”

The new video contained a link to a Dropbox folder filled with documents detailing personal accounts of the working conditions at developer Limestone Games, including a letter sent by developers to Focus Home in late June that claimed that “due to an unbearable workplace environment created and nurtured by the management of the company we are forced to end our relations with Limestone Games.”

The video description itself states that “people who have worked on every shot of [the trailer] are no longer with the company holding IP rights. Some were not even paid for their work.” It also states that the IP was “stolen from the creators” and that there’s a pending conflict over its ownership.

Our statement regarding Limestone Games and Aeon Must Die!. pic.twitter.com/75ldhtp27T

Speaking to PC Gamer, the game’s creator and Limestone’s founder, Aleksei Nehoroshkin, who left the company more than six weeks before the State of Play trailer dropped, detailed excessive crunch, unpaid overtime and “psychological abuse” at the hands of certain members of staff.

Nehoroshkin recounted questionable or missing contracts for developers who contributed to Aeon Must Die, missing overtime pay, and complete burnout among the team, who were allegedly pushed to near-constant crunch to meet unrealistic deadlines under threat of losing the intellectual property. That was one of the earliest red flags that something was deeply wrong at the studio, he said, because as the founder, he’d never signed a contract that gave up his claim to the IP. “I didn’t know it was even signed,” he said. “I thought if I didn’t sign it, it wasn’t signed yet. I was always told that we just had a letter of intent.”

Earlier this year, the Aeon Must Die team tried to convince Limestone’s investor to replace the CEO, but their proposal was rejected. That was when they decided to reach out to their publisher as a last-ditch solution. (Focus Home Interactive and the CEO of Limestone Games did not respond to requests for comment for this article.)

“It was one year of psycho terror,” Nehoroshkin said. “I was so done. Everyone was so done. It was out of control. I almost killed myself—not literally, but just, complete burnout.”

The developers appealed to an investor to try to oust Limestone’s CEO – originally brought in by Nehoroshkin – who they blamed for many of the studio’s problem, but were unsuccessful. Instead, Nehoroshkin appealed to Focus Home, claiming that the CEO had broken the terms of his contract, hoping that the publisher would reclaim the IP from Limestone and return it to Nehoroshkin and his team to complete.

Focus says that it’s “carefully looking into these allegations and will draw the necessary conclusions if they prove to be well-founded, and then take all appropriate measures.” Nehoroshkin says the former developers are now in conversations with their chapter of the International Game Developers Association for advice, but everything currently seems to hang on Focus Home and the results of its investigation.