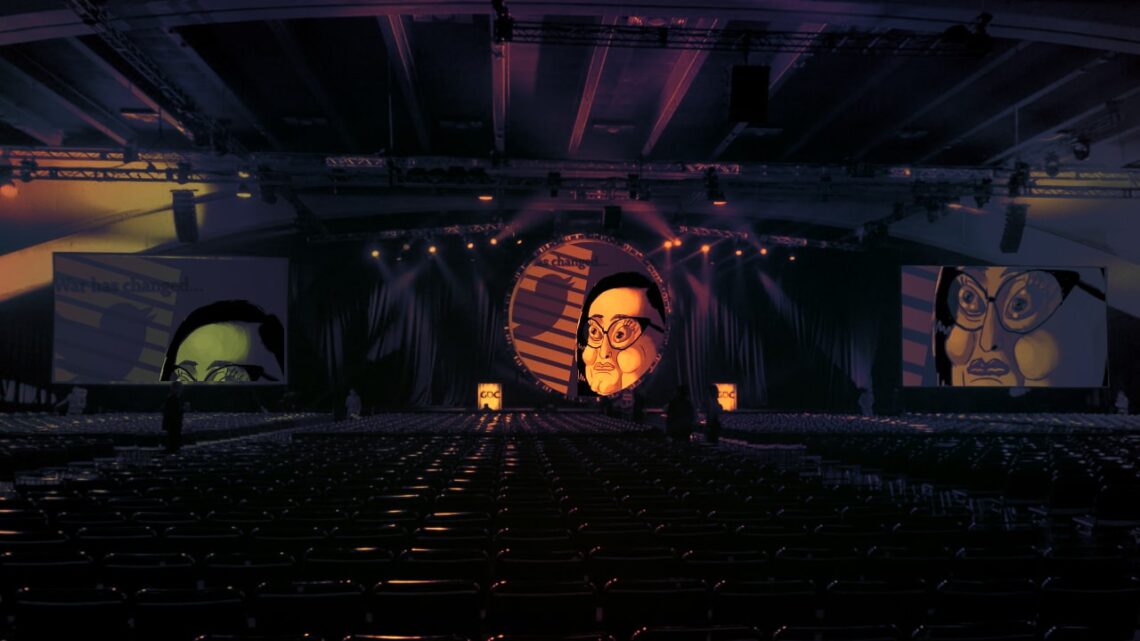 Every year, game developers and the hangers-on parasites of the game industry get up on stage at Game Developers Conference to show the world how woke they are by parroting every social justice narrative known to personkind. No longer do they focus on video games and what they have to offer in terms of innovation and the kind of stuff gamers actually care about — like, you know, the gameplay. They instead talk about how games are to blame for every social ill, real or imagined.

In the wake of the shooting in Christchurch, New Zealand, a number of game industry luminaries attempted to blame it on the toxic gaming community that fostered an environment that bred the shooter’s mindset.

Take Meg Jayanth, a narrative designer for the gaming studio Failbetter Games, who used the IGF Awards stage to orate about how we as a gaming community should take a stand against the hate and racism that fueled — here it comes — GamerGate, and ultimately — of course — the Christchurch shooter. Certainly a stretch, but one that a lot of the game industry seems to believe to be true.

Any narratives to the contrary are immediately shot down, and anyone who speaks out against this lie is unpersoned and treated like a bigot. In fact, gamers are called “part of the problem.” They demanded, as you’ll recall, that the audience itself change. You are just a worthless bigot and a slate onto which games journalists — of all things — must write their enlightened and perfect worldview.

It all came to a head at the tail end of 2014 when GamerGate itself happened following years of lies and narrative deception by the gaming press, which promoted this idea that the gaming community was inherently toxic and evil. Did you cuss out your buddies in a Modern Warfare 2 lobby? Well, you’re part of the problem. Never mind that everyone simply got along and that banter is part and parcel of any competitive experience — we are instead expected as gamers to dumb down our personalities to pander to these special snowflakes who can’t tolerate the least bit of banter. 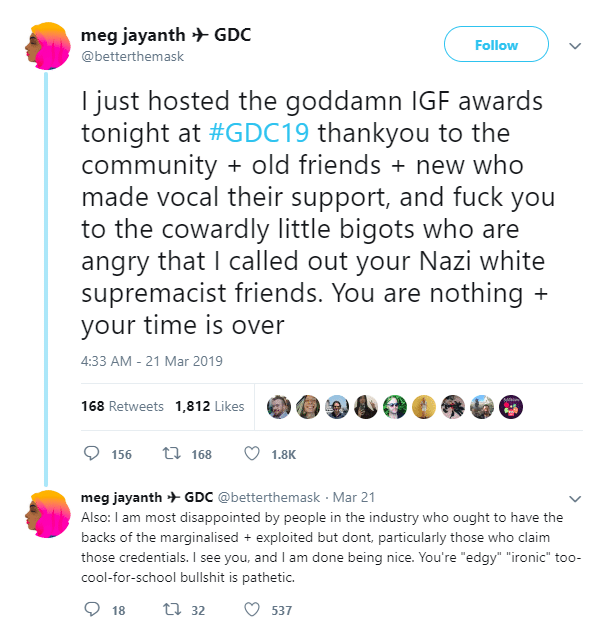 Naturally, Jayanth’s words were not well accepted by the gaming community. Of course, her peers in the industry celebrated her message as a necessary one that everyone ought to heed, and I have little doubt that the industry itself, afraid of being unwoke, will follow suit with censorship and efforts to control their audience.

These people are simply out of touch with reality. Jayanth’s words only serve to spread hate and sow division in the gaming community. This is precisely what the shooter wanted in his demented accelerationist manifesto. He said so quite plainly, and it is sad to see so many — like Jayanth — play right into his hands. All they get from increasing their grip on the culture is even worse pushback from the audience they are supposed to serve.

These words, and these actions fuel resentment in the gaming community, so it should be no surprise to anyone that everything under the sun — including the announcement of new video games — is met with skepticism and fear that these new products too are going to become ammunition in the culture war.

Following the negative reception, Jayanth took to twitter to complain about the amount of abuse she received from the public, complaining about the state of her mentions. She claims to have spent hours locking down her accounts from haters and that her mentions have been full of misogyny, transphobia, and the usual word soup.

“It’s wearing, it’s eroding, it lives inside our community,” she stated, adding that if you have any sort of power in the industry, particularly if you’re a quote unquote white cis man, then you should use your power to call it out, reject it publicly, and stand besides the eternal victims of the game industry. As expected, male feminist allies and white knights jumped to her defense to smash those like and retweet buttons. Stronk women of the self-professed variety always need other people to boost their terrible opinions while simultaneously treating them like dirt. 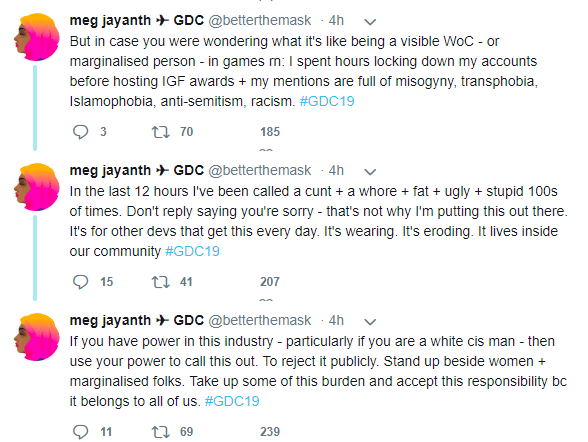 Contrary to all the claims that violent video games cause aggression in teenagers, studies have shown the very opposite. The Oxford Internet Institute published one of the most comprehensive studies on the subject, using a combination of subjective and objective data to measure teen aggression and violence in games. Long story short, there’s no link between the two.

This is one of several comprehensive new studies that show no links between violent video games and aggression in those who play them. So why is it that in spite of all the evidence showing that video games have no negative psychological impact on gamers, some of the very people who make video games are claiming otherwise? Making video games doesn’t make one a psychologist, obviously, and people like Meg Jayanth presume to speak for the entire game industry when they speak out against the products they create. Why is this?

The shooter is being absolved of his responsibility when the gaming community is blamed for it. He needs to be held accountable for their actions. Dragging around long debunked excuses like violent video games takes the responsibility away from his vile actions and might even make people want to commit these crimes due to the exposure and the blame shift that absolves them.

New Zealand’s response to the event in its entirety is a matter of debate (a taster), but there is no doubt that the government did the right thing in banning some of the videos going round because it stops the glorification of the crime and reduces the risk of people wanting to attempt it for their own 15 minutes of fame. After all, his message wouldn’t spread so far and wide were it not for the press attention that comes with his actions.

Can’t we just go back to playing video games?

Nice job citing those studies. Remember back 25 odd years ago when Lieberman and them were leading the same crusade? I remember growing up with people reviling such censorship. What happened? But when you look at it, that came from the same side of the political spectrum that it’s coming from now. Funny how I get called an authoritarian bigot simply because I hold a Biblical Christian worldview, and the real heroes are people behind violent protests over speech they don’t like, rating systems, the PMRC, etc. etc. Who’s the real tyrant?

Does anyone even care about what these people have to say anymore?

I’m a little puzzled as to why everyone argues with these people. It’s far more fun to simply hear them out and then disagree. {Warning, this will push some of them to violence. So be prepared to have them arrested and prosecuted.}

I think it’s Tucker Carlson who advocates ending any argument with them and just laughing in their face. What more can you really do?