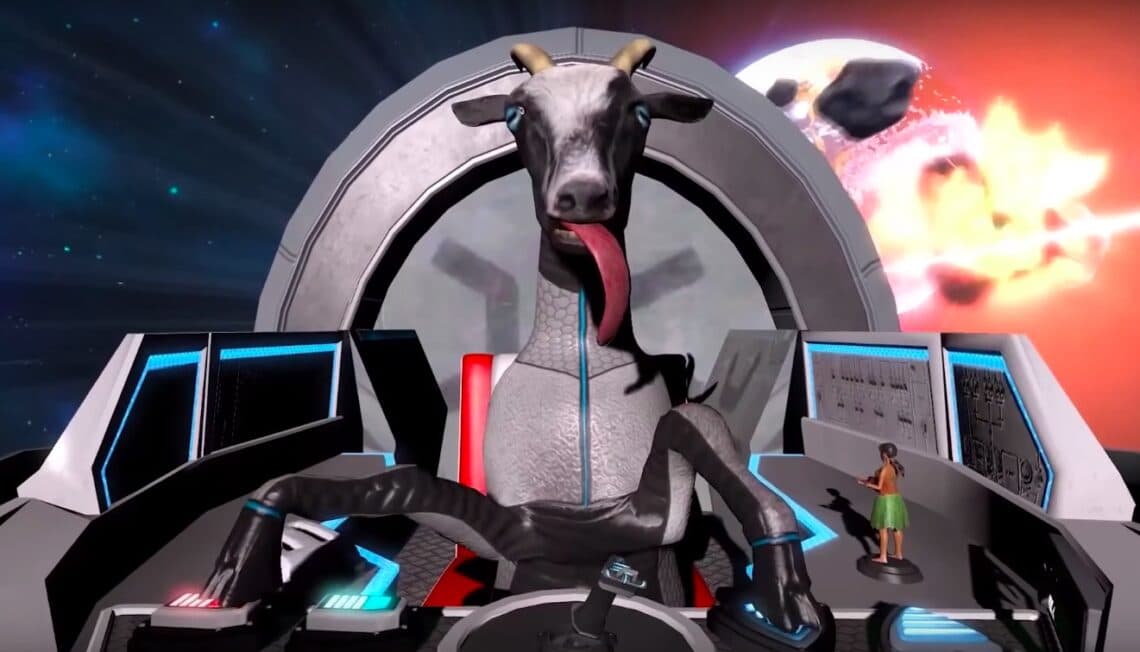 It’s a rare treat when developers dare to enter the competitive video games market with something completely absurd — and their creations are actually entertaining. I would say it’s even the stuff of legends. Who on planet Earth hasn’t seen the endlessly hilarious Goat Simulator at this point? So buckle up and let’s get to it, and drop your own favorites in the comments (we might add it to our list).

At first sight, this is just another indie driving simulator with a few exploring and crafting elements. But in practice, The Long Drive is a post-ironic ode to the tidal wave of indie survival games.

Your trip lies through a boundless randomly generated desert that adds some roguelike spice to the gameplay. The vehicle is a moving island of life and simmering sanity. There’s no reason for anything in this simulated world. It all started with a man who assembled a car out of garbage, and it will be over only when one of them decides to stop.

Exploration in The Long Drive will provide you with many surprisingly realistic, hilarious, and even gross episodes produced by a lonely man lost in a desert. You will definitely laugh non-stop from loads of sly humor and references, and change your mind about the indie survival genre back to something positive.

This one deserves to be of the coat of arms of the entire indie wave of simulation games. It was at the roots of a galaxy of phenomenally popular YouTube lets-play channels, including PewDiePie. It will make you laugh and scream in despair as it’s incredibly hardcore.

You play a surgeon who must repair a heavily wounded guy, using a bunch of sharp instruments and an almost uncontrollable arm. It’s one of the worthiest simulations on Steam and will definitely have you laughing.

The freedom of simulator games lend themselves to hilarity, so here’s another one. Imagine yourself a goat that came from nowhere, and your mission is to plunge the entire city into chaos. Horns’n’hoofs are your only instruments for interacting with the environment. You will never die or lose, though you can invoke the devil, clean-up the neighborhood of zombies, rob a bank, or even become an astronaut and cause mayhem on a space station.

Picture that, then picture the YouTube results when millions of people got their hands on this premium goat/LSD experience.

While The Long Drive isn’t very straightforward, West of Loathing is a real humor bomb. It’s a pretty linear single-player adventure RPG with (it’s not an exaggeration) thousands of top-class jokes and gags. You can either walk through the mad world of Kingdom of Loathing in a peaceful manner or embark on a dangerous turn-based combat path with crazy cowboy skeletons, drunk horses, demonic cows, and mysterious gold mines.

There’s always something to laugh about here, so GamesMojo.com recommends West of Loathing to everyone who needs a fine portion of rampant hoaxes with a relevant cheesy flavor.

It might be not very fair to put Undertale next to the titles above because it’s a genial franchise in many ways. And sparkling British-style humor is one of them. You play a kid who got into an underground land of monsters where all creatures are not just blood-starving monsters, but, first and foremost, personalities with complex stories, souls, and a pocketful of good jokes. Every decision you make effects the narrative dramatically.

Alina is an enthusiastic gaming journalist and reviewer. Being the chief-editor at GamesMojo.com, she has an opportunity to share her love of video games with the world and inspire her team of like minds.

WarioWare Smooth Moves should be on there