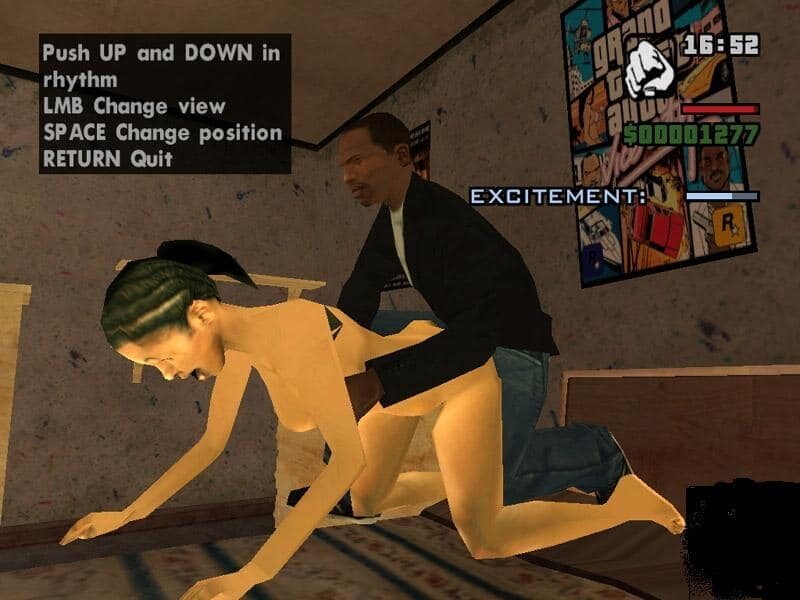 Yes, it’s big news – all over the Internet, news services and even newspapers – there’s hidden sex games in Grand Theft Auto: San Andreas! Owners of the GTA San Andreas PC game have access to an unexpected bonus with the recent release of the Hot Coffee modification. The Hot Coffee mod unlocks sex content that was coded into the original game but remained inactive in the final release because of the obvious classification implications. Or so the theory goes…

Take-2 don’t feel obliged to comment on the activities of the modding community, but they might find themselves in bit of trouble if the claims of 36 years old Dutchman Patrick Wildenborg prove correct. Patrick carved his name in gaming folklore by unearthing this code and is adamant that Hot Coffee is not a modification (in that he altered none of the game’s original code), but merely unlocks the content that was already in the game.

If this is true, RockStar and Take-2 could find themselves liable for the content and as such, the game could be reclassified in various territories around the globe. Wildenborg’s statement is currently being explored by many classification departments, especially in the United States where the game was already under attack from politicians. The US classification could rise from Mature to Adults Only, and given Australia’s ‘no sex in games’ policy, there is the potential for GTA San Andreas to be banned locally. Although with the game living at the top of the global charts for six months and having already sold many millions of copies, the phrase ‘closing the door after the horse has bolted’ springs to mind…

Brace for a wall of updates. The pictures are posted below.

UPDATE (July 19, 2005): Hillary Clinton chimes in on the affair. Clinton wrote in a letter to the head of the Federal Trade Commission, “We should all be deeply disturbed that a game which now permits the simulation of lewd sexual acts in an interactive format with highly realistic graphics has fallen into the hands of young people across the country.” The potential Presidential candidate went on to say, “The disturbing material in Grand Theft Auto and other games like it is stealing the innocence of our children… I believe that the ability of our children to access pornographic and outrageously violent material on video games rated for adults is spiralling out of control.”

Though it was originally thought that the sex scenes were only available on the PC version, it now seems that the Xbox and PlayStation 2 versions of GTA: San Andreas are also capable of showing the sex scenes, though user modifications and third-party cheat codes (using devices such as the Pro Action Replay).

The result of the Hot Coffee controversy could have a chilling effect on after-market modifications of video games; to avoid future controversies like this, publishers may opt to place more barriers between players and the game source code. While this approach might help keep the publishers out of hot water, it will alienate many thriving online mod communities.

UPDATE (July 21, 2005): The US games classification board, the ESRB, has announced that it changed the rating from Mature to Adults Only for Grand Theft Auto: San Andreas on the PlayStation 2, Xbox and PC. Publisher Rockstar Games has said that it stopped making the current version and is working on a newer version – undoubtedly with the sex mini-game code removed.

Rockstar’s parent company Take-Two Interactive for the first time went on record that the sex min-games were built into the retail versions of the games. The company originally stated that the mini-games were the result of dramatic reverse engineering by hackers.

“There is sex content in the disc,” said Take-Two spokesman Jim Ankner. “The editing and finalization of any game is a complicated task and it’s not uncommon for unused and unfinished content to remain on the disc.”

In response to the latest fiasco, Rockstar will offer new rating labels to allow retailers to sell existing inventory. In addition, the company will also release a downloadable patch for the PC version to remove the adult content from the game.

UPDATE (July 27, 2005): The U.S. House of Representatives has overwhelmingly voted for the Federal Trade Commission to investigate publisher Take-Two Interactive and its subsidiary Rockstar Games. The final vote was 355 for, 21 against, with 56 abstaining. The investigation will attempt to determine whether the companies knowingly hid the content from the US classification board, the ESRB, in order to obtain a lesser rating of Mature.

UPDATE (July 28, 2005 / Funky Zealot): An 85-year old grandmother suing Rockstar over the scandal. Florence Cohen filed the lawsuit in U.S. District Court in Manhattan, and alleges that developer Rockstar and parent company Take Two Interactive Software engaged in false, misleading and deceptive practices. The then-M-rated game was a gift to her 14-year old grandson, which she has since taken away in light of the Adults-Only rating and “Hot Coffee” mod discovery.

Cohen is seeking unspecified damages on behalf of herself and consumers across the United States, saying the company should give up its profits generated from what the accuser believed to be false advertising.

“The least this company can do is offer refunds,” said Laurence D. Paskowitz, Cohen’s lawyer, to AP, adding that no parent would knowingly buy an Adults Only-rated game for their children.

UPDATE (February 2, 2006 / Vicious Sid): Rocky Delgadillo, district attorney for the city of Los Angeles, is suing both Rockstar Games and New York-based Take-Two Interactive for civil penalties stemming from the Hot Coffee scandal that damaged the developer’s reputation this past summer, leading to a proposed federal probe of Rockstar Games and a retroactive Adults Only rating. The game was briefly removed from nearly all store shelves in both the States and Australia before Rockstar deleted the hidden sexual content and re-released a cleaned-up version of the game.

Delgadillo’s suit charges that Rockstar made misleading statements when marketing Grand Theft Auto: San Andreas. “Businesses have an obligation to truthfully disclose the content of their products, whether in the food we eat or the entertainment we consume,” Delgadillo said in a statement.
…

…….So, err, want to see what all the fuss is about? Be warned these pictures are sexually explicit (in a cartoony way) and not for minors. 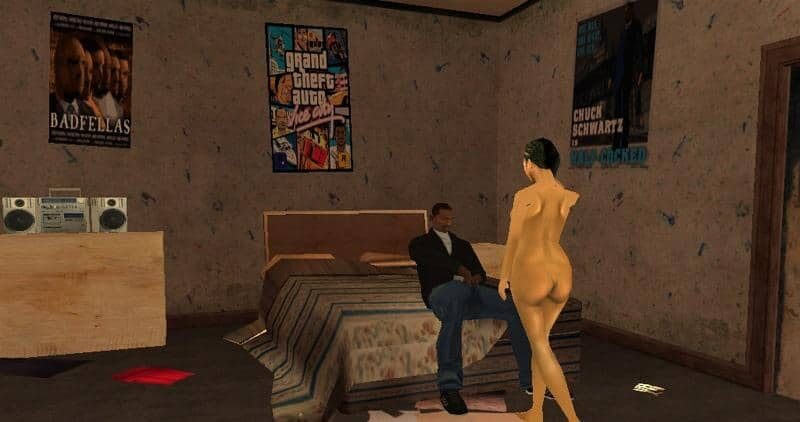 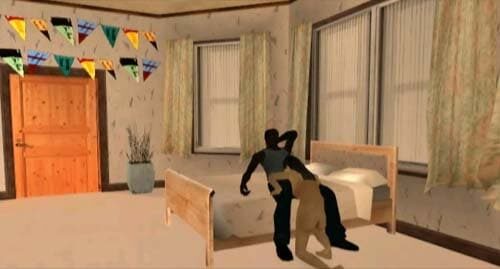 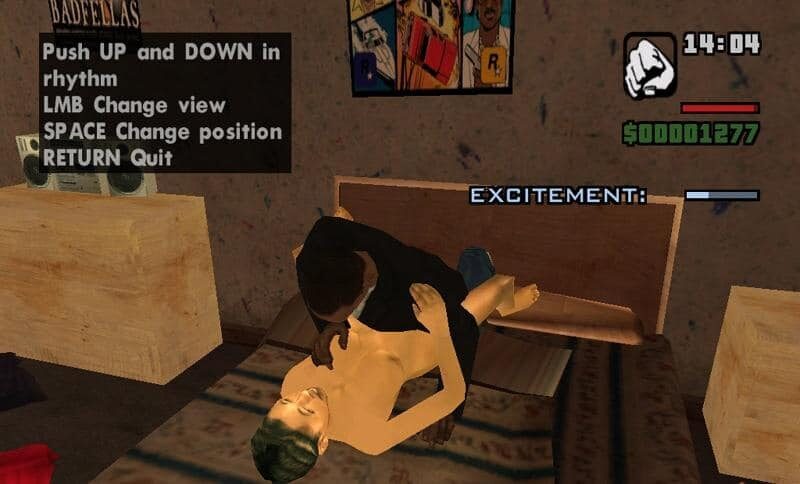 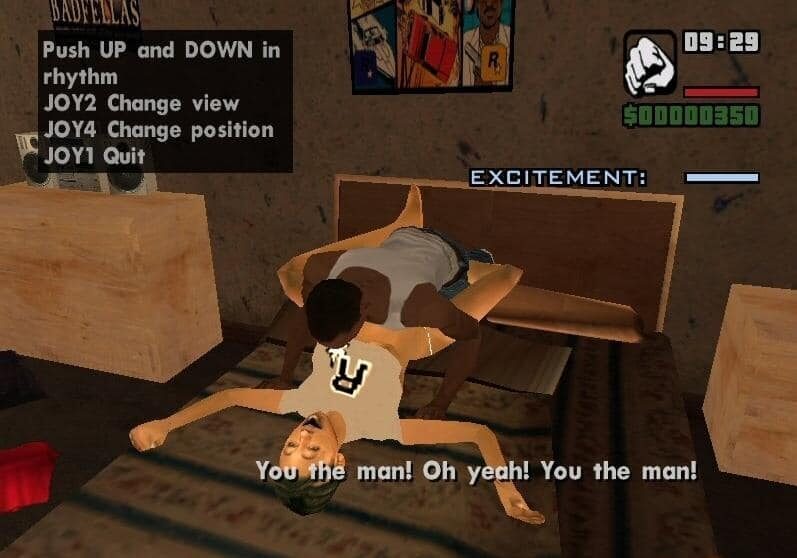 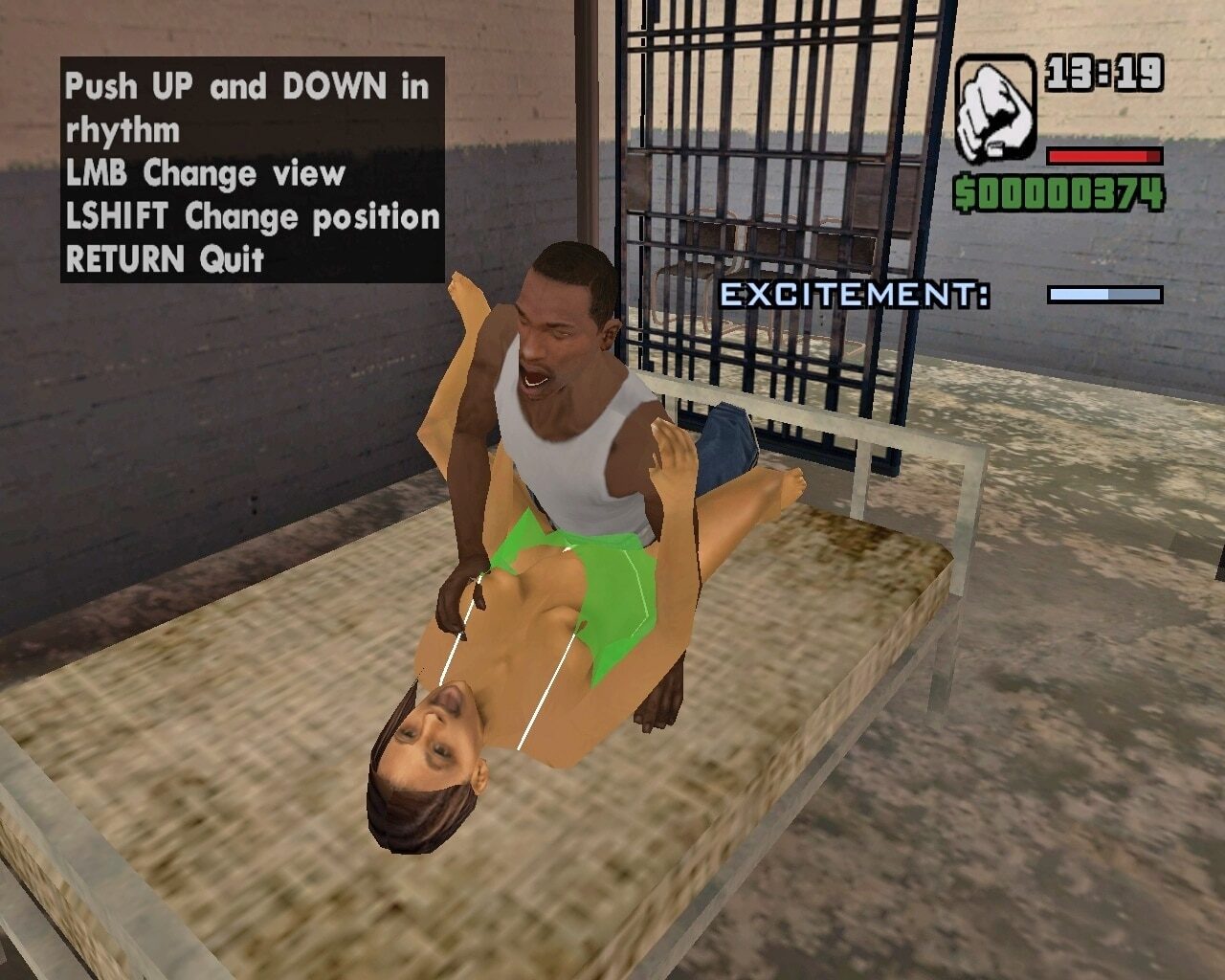 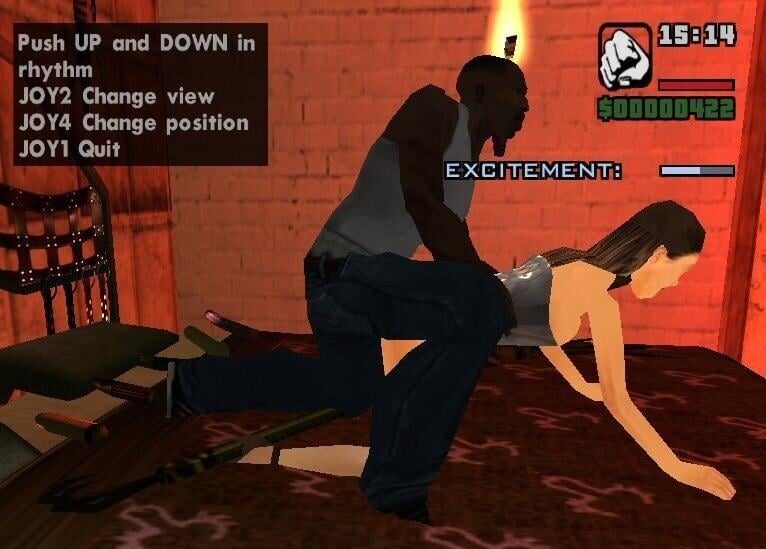 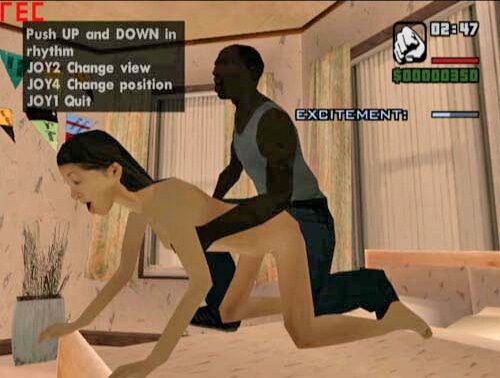 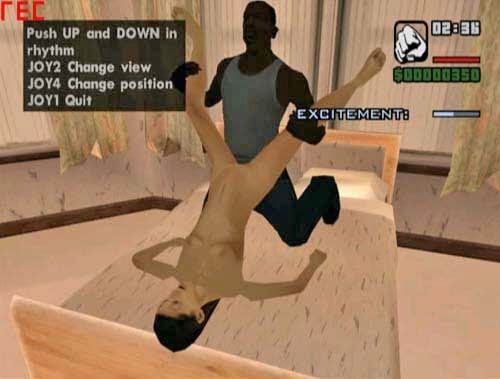