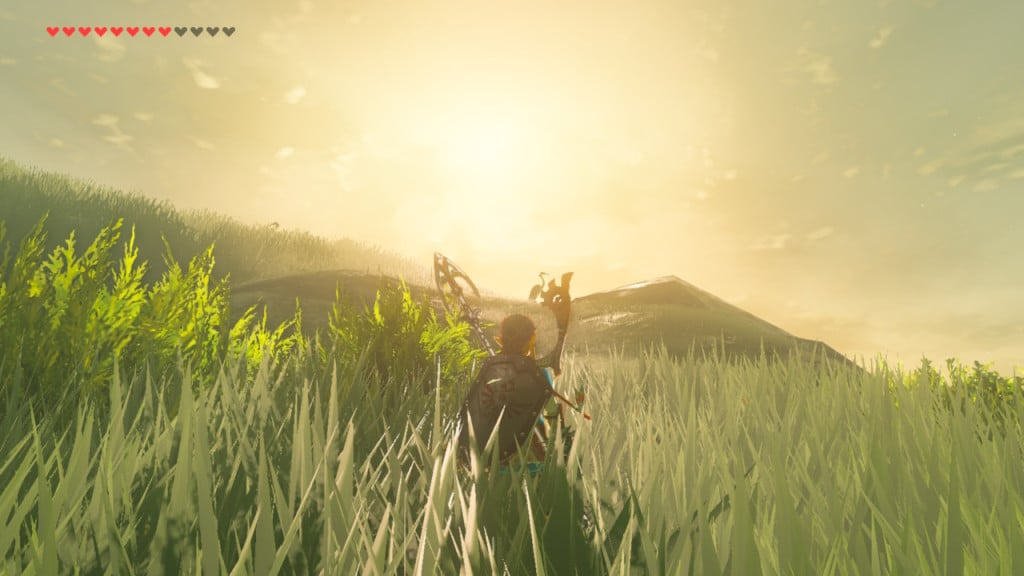 Ocarina of Time is a game embalmed by layers upon layers of impenetrable nostalgia. It’s a hallowed relic of our collective youth, enshrined in the temples of our memory. Do not take its name in vain. Touch only with a conservationist’s glove, lest its magic disperse.

That status isn’t surprising: indeed, it’s almost what it was designed for. Unlike earlier Zelda games, Ocarina of Time is fundamentally about nostalgia, childhood and growing up. Link is a boy living among the forest children of the Kokiri, but he is an outsider; unlike them, he will grow old. He is compelled to leave his snug childhood shelter and venture into a large, dangerous world. The tests leading up to the Temple of Time are framed as rites of passage that result in an actual, not-at-all-metaphorical growing up: Link travels seven years into the future. It’s a jarring transition from an innocent, childish wonderland to a ruined wasteland.

Ocarina of Time toys with childhood fantasies and anxieties of growing older. It captures the anticipation as well as trepidation. I remember being torn about Link growing up when I was ten. Finally being able to play as a grown up hero with a badass sword was an exciting prospect, but there were scary things like zombies in this brave new world too. The most disturbing thing to me, however, were those lost years themselves. Where had they gone? What had happened in the meantime? Would Link recover his adolescence in the end?

Breath of the Wild, too, uses missing years as its central conceit. Link awakes from a 100-year coma and, as in Ocarina of Time, finds himself in a world that has already been taken over by Ganon. Hyrule has become a dangerous wilderness, its ruins claimed by hordes of monsters and corruptions. It’s a lonely world, and exploring it means traversing long stretches of “empty” space that has been reclaimed by nature. The few survivors are huddled together in tiny villages in the margins of this world and the center is dominated by Ganon’s palace, nestled in the middle of forests and steep hills.

That world of a century ago feels distant. The Hyrule in which Link and Zelda grew up in is preserved only in a few of her snapshots, and in the memories triggered when Link finds their locations. Link isn’t the only one who half-remembers the past. Some of the inhabitants of Hyrule have forgotten entirely or, if they do remember details, dismiss them as silly fairy tales. Others are fascinated by the old stories, but they have become myths with vague contours, something your grandmother told you when you were a child. Link’s life story has been banished to the realm of song and legends. 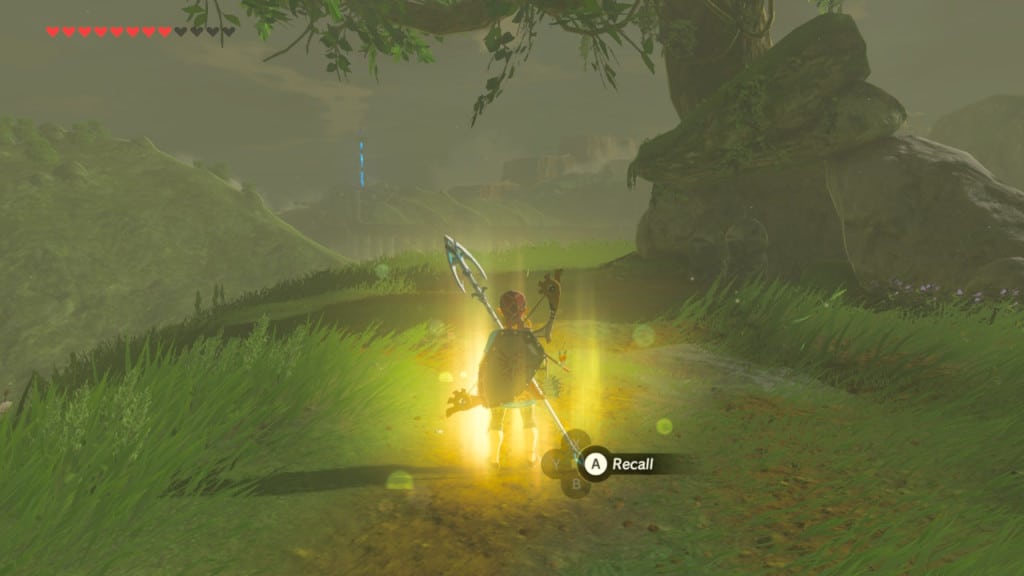 Unlike Ocarina of Time, you never get to visit that old world, and defeating Ganon will not restore those lost years. Link will always be out of place in this new age, Zelda will always have failed in her attempts to fight Ganon, and the Champions will remain dead. If Ocarina of Time was about the shock of suddenly growing up, Breath of the Wild is about looking back many years later, simply trying to remember and to make sense of it all.

The Zelda games aren’t strangers to mature themes. Majora’s Mask transforms a simple “save the world” plot into a terrifying existential crisis, and Ocarina of Time has its own share of nightmare visions and tragedies. In its own muted way, however, Breath of the Wild deals with perhaps the most mature theme the series has tackled: regret. The heroes of the old world failed, leaving their purpose unfulfilled. The Champions died in vain. It may be a problematic cliché that the only despair we witness first-hand is that of Princess Zelda, while Link remains the stoic (male) hero, but it still drives the point home: the people of Hyrule are haunted by past mistakes they cannot change.

Still, despite its elegiac notes, Breath of the Wild remains defiantly optimistic: while you cannot change the past, you can redeem it. Defeating Ganon will not bring back the Champions, but at least their deaths will not have been in vain.

The landscape, the secret protagonist of the game, highlights these themes. Where the post-Ganon world of Ocarina of Time was a hellish nightmare, Breath of the Wild’s Hyrule is a calm place that evokes melancholy rather than danger or dread.

This is technically a post-apocalyptic world, but it doesn’t really feel like it. Hyrule is a lush and vibrant place reminiscent of Studio Ghibli’s idyllic landscapes. The emptiness left behind by a lost civilization has been filled by a rich flora and fauna whose beauty more than compensates for the stains of corruption. In those moments when you’re not being pummeled to death by Ganon’s minions, you’d be forgiven for thinking Hyrule is a paradise that doesn’t need saving. All was not lost when Hyrule fell. 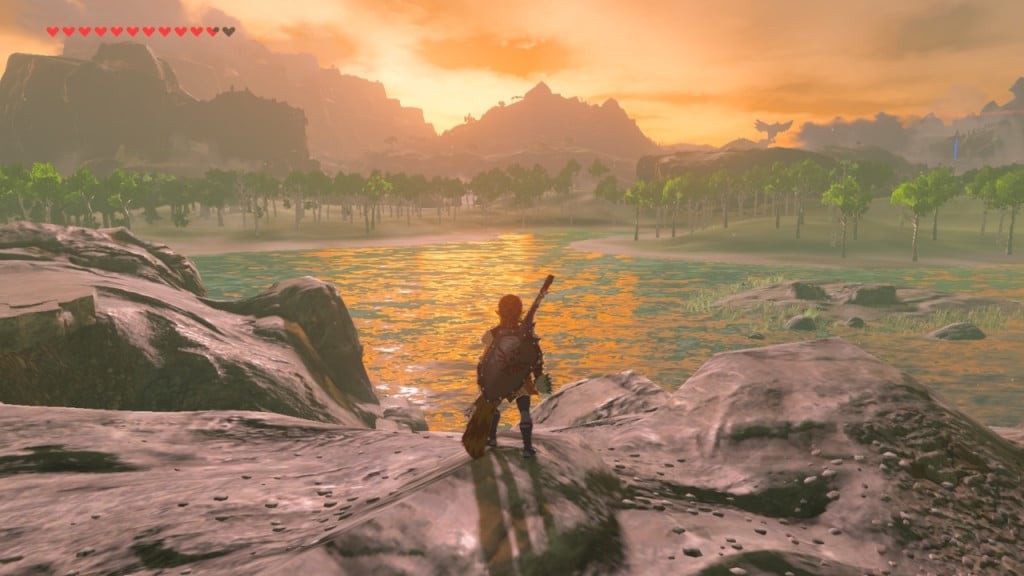 The people of Hyrule, who have found their own niches to prosper in, don’t live in permanent fear of Ganon. They barely remember the olden days and have moved on, living their own lives instead of trying to recreate those of their ancestors. Pining for a savior is a pastime of the wise, and those initiated to ancient lore. The common people mostly seem to be doing just fine without a hero (I’m looking at you, intrepid truffle sisters).

They’re not the only ones who’ve moved on. Unlike Zelda and the spirits of the Champions, Breath of the Wild isn’t stuck in the past but breaks away from conventions that once seemed chiseled in stone. It does look back across the series, but refuses to tread the same old ground. It does return to familiar tropes, like a preoccupation with the passage of time, but only so it can highlight the ways in which this new approach differs.

The ruins of the Temple of Time and the Lon Lon Ranch, or the low-key interpretation of the classic Zelda theme ‘hidden’ in another melody, all seem like faded echoes travelling over long distances. Unlike the repetitions of many earlier Zelda games, this isn’t a remix or best-of desperately trying to channel past successes. It is an acknowledgement that the past is the past, and any attempt to recreate or preserve is not only futile, but also reduces these venerated worlds to cheap commodities. 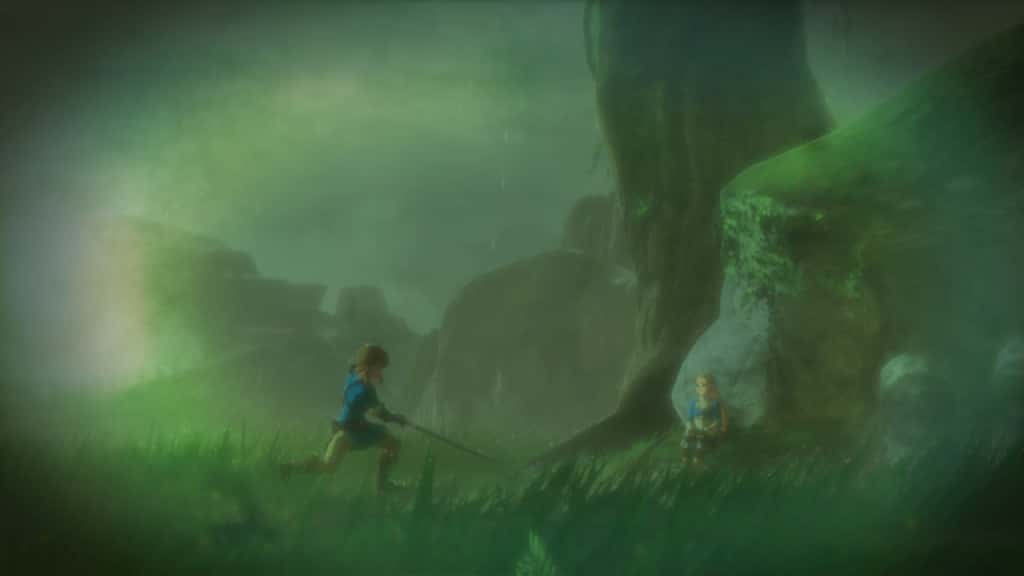 This makes Breath of the Wild, somewhat ironically, feel like the most faithful Zelda game in a long time, and not just because it encapsulates the original The Legend of Zelda’s design philosophies. Rather, it reminds me of playing Ocarina of Time when I was little.

One reason for this is that both games understand the peculiar alchemy of mixing childish joyfulness with mature themes. Breath of the Wild’s melancholy doesn’t stand in the way of an unprecedented playfulness that suffuses its whole world, whether you fiddle around with its physics systems to set Bokoblins on fire, shield-surf down a mountainside or simply celebrate being naked with a maraca-wielding tree spirit. There’s a disarming lack of pretension that bypasses any cynicism, and leaves you vulnerable.

Breath of the Wild is the first Zelda since Majora’s Mask that feels like it has something meaningful to convey, and it resonates with grown-up me in a similar way that Ocarina of Time resonated with ten year-old me. It uses the same basic myth of a hero displaced in time to make sense not of growing up, but of having grown up and trying to reconcile past and present despite all the gaps that may be found in the distance between them.

It makes us think about the past by moving away from it, and makes us confront the present by toying with our nostalgia. It’s at ease with tensions and contradictions. Which is why playing Breath of the Wild feels like coming home and saying goodbye all at the same time.

This article originally appeared elsewhere, and was brought back to life after the website went defunct. The author is not affiliated with Ganker.