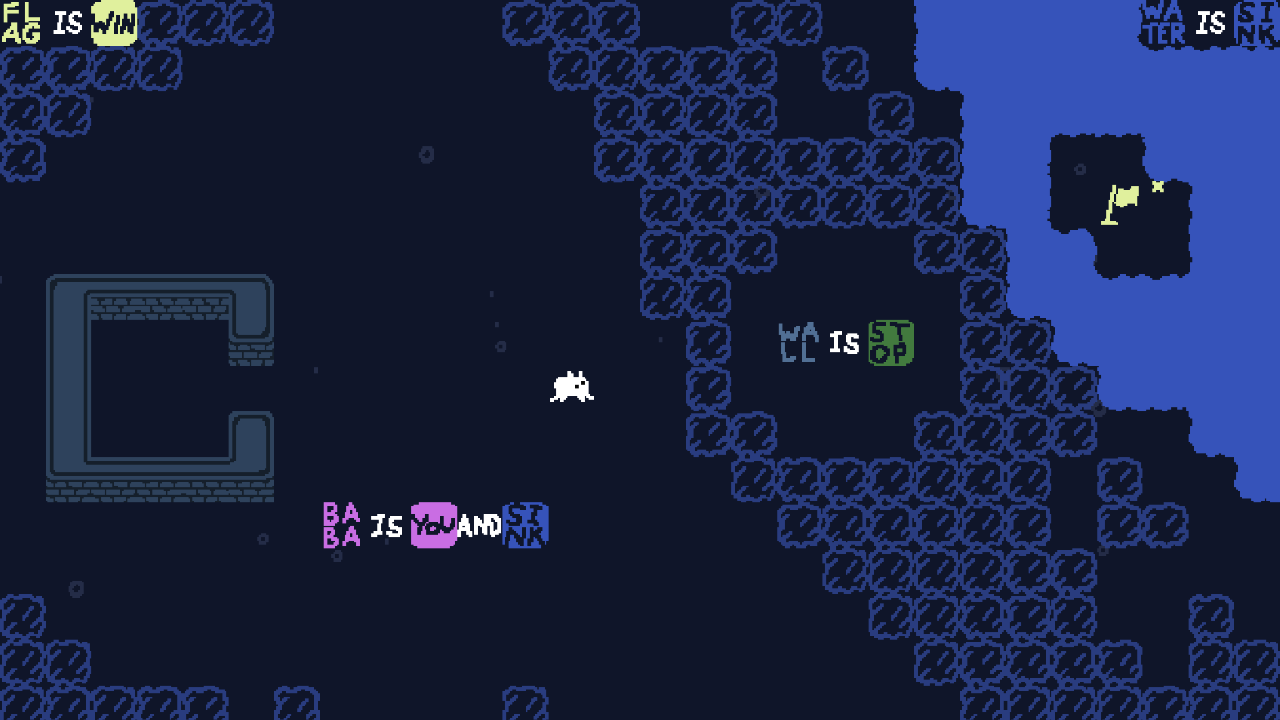 Games often reflect everyday suppositions about how the world works, whether or not they’re set in a version of reality. They are, after all, made by people who live in the reality as everyone else, exposed to the same opinions and language, and their creative expressions are embedded with society's dominant ideas about success, duty, relationships and countless other subjects.

Equally, however, games are well-suited to challenging the ‘common sense’ status of many notions. While they reproduce the operations of daily life, they also provide us with ways to imagine and interact with the world differently. Regardless of any explicit political commentary, games can stimulate us to think more critically about our deepest assumptions.

Certain puzzle games are particularly interesting in this respect. On one hand, all puzzle games involve thinking through the permutations that their rule sets and environments provide, to deconstruct their logic until we grasp how it fits together. On the other, there’s an extra dimension in play when puzzles relate to ordinary objects and scenery, in that they get us to rethink how the world is constructed and explore its previously unconsidered possibilities.

Games such as The Witness, Gorogoa and Baba Is You alter our perception of things we take for granted, and in doing so toy with our sense of certainty. In effect, they recognize that players come into games with a lot of undeclared baggage, and prompt them to acknowledge and sort through it. And the feeling of familiarity is important, because it’s only when the familiar seems alien that it reveals how much of our ‘knowledge’ depends on perspective, and how difficult it can be to unlearn it.

These games aren’t simulations of reality, but remain connected to it in ways that, say, the purely abstract puzzle space of Tetris or the sci-fi setting of Portal do not.

In The Witness, some puzzles retrain us to examine background detail that normally goes unnoticed. In these sections, we have to shift our thinking to look at or listen to things that we’re used to walking by without a second thought. Shadows, reflections and birdsong form part of the solutions we seek, with their specific arrangements becoming highly significant.

In contrast, larger concerns are frozen in time. We aren’t given a meaningful goal to pursue and there are no social interactions to partake in. This changes our conventional mode of consciousness, as the things that usually matter no longer do, and everyday irrelevances fully occupy our attention.

There’s also an intriguing relationship in The Witness between its surface of mystery and natural beauty and the mathematically precise logic beneath it. While some of its puzzles test our awareness of the environment, others build hard and fast rules through codes and symbols. Yet this computer-like language doesn’t so much contrast with the outside world as complement it, as we also start to notice ordered patterns and shapes in its structures. In this way, The Witness reflects how even nature and thought are built on reliable systems that overlap in complex ways to create apparently random effects. It shows that even things which seem to exist for no discernible reason, or are just 'the way they are', can be explained if we look closely enough.

In a different way, Gorogoa also deals with unseen connections. Its sketched scenes come alive as paper-thin cutouts, enabling recognizable features, such as stairways, doors and butterflies, to interact in impossible ways.

You move one picture and uncover another beneath, zoom in on a scene to view another playing within it, or slide pictures together to create new pathways. In the process, places and situations that seemed unrelated begin to link together.

It’s undeniably surreal, but it can remind us how everyday objects may be different things to different people and tie us together. For example, something as simple as an apple – an important symbol in Gorogoa – which we usually see as a piece of fruit to be bought and eaten, requires a whole series of processes and people to bring it to shop shelf, not to mention international trade agreements and concepts of ownership and value.

Something else Gorogoa offers is a sense of history. Throughout the game there’s a feeling of unease, in part conveyed through signs of conflict such as injured children and piles of rubble. Meanwhile, people often sit lost in thought or diligently studying large reference books. And a lot of what surrounds them, from the architecture and statues to the pictures and ornaments that litter the rooms, points to the past.

The puzzles create connections through time, as we find something old that affects the composition of the present. It creates a feeling of ongoing learning, especially when the thought bubbles of NPCs come into play. First we spark their ideas by revisiting a body of accumulated knowledge, then act on those thoughts to try and resolve the world’s ills.

Finally, Baba Is You touches on something at the core of consciousness: the way language determines how we understand our surroundings. On the surface, it reverses reality, by allowing words to determine how natural phenomena, such as rocks and water, behave.

Of course, it’s absurd that we can only push a rock if the text says so. Yet there’s a kind of truth here: the way we interact with objects is based on socially and linguistically constructed concepts, and the notion of pushing a rock is entirely a matter of human thought. The idea of a rock as something that can be pushed, or that is heavy and can crush things, is located in the connotations of the word ‘rock’, rather than in actual rocks. The object itself has specific attributes, but the idea of weight or of something being useful or dangerous, all of that comes from us.

What’s illustrative about Baba Is You is that when it severs the link between word and object, we struggle to forget our ingrained conceptions.

Baba may be stuck in a room with no way out, until we eventually notice that the walls have no assigned properties and we can walk right through them. We may work to maneuver a key towards a locked door, only to realize that it’s easier to assign the ‘open’ command to a flag and use that instead.

The point is not that we can really use a flag to unlock a door merely by saying it’s possible, but that we can rethink how our perception of the world becomes restricted by the language we use. Why do we automatically perceive rocks as tools or obstacles?

These games highlight the assumptions in our knowledge, presenting us with the idea that even apparently self-evident facts can be rethought.

And the question then is, if we have these entrenched perspectives when it comes to things, aren’t they also part of how we understand concepts, values and human relationships? What do we assume when we talk about big ideas such as love, democracy, money, happiness? Why do we accept that certain words are acceptable or amusing, while others are rude? What have we already decided, without even knowing it, when we meet different kinds of people? And where do all these ‘common sense’ notions come from?

Early on in The Witness, a video log plays part of a 1978 TV documentary fronted by science historian James Burke. In the clip, Burke emphasizes the importance of ensuring that the whole of society benefits from the coming technological revolution, and calls on us to recognize within ourselves “the ability to understand anything, because that ability’s there, as long as it’s explained clearly enough. And then go and ask for explanations.”

As for what to ask about, he says you should consider “if there’s anything in your life that you want changed. That’s where to start.” To create inclusive progress we can’t merely accept the answers we’re given, but must identify gaps and deficiencies and seek our own answers.

Yet Burke’s focus here is on scientific knowledge, or facing the difficult questions about the building blocks of reality, and he plays down the importance of culture. As he says, the likes of art, philosophy and politics “are interpretations of the world that tell you more about the guy who’s talking, than about the world he’s talking about.”

But the value of games like The Witness, Gorogoa and Baba Is You is also in these interpretations. They tell us not only about the people who made them, but the social conditions behind them, and ourselves through how they make us think. In the process, they ask us to consider things as malleable that we otherwise assumed were fixed, and to examine underlying connections and unrealized potentials in our reality. To decide what we want to change, we first must realize that almost everything is changeable.