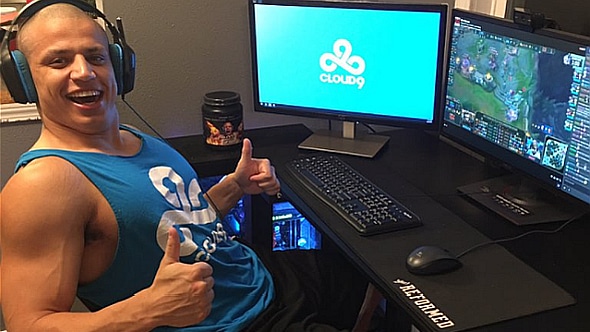 If you’re a young person, chances are you’ve already thought about turning your love for gaming into a career. A Morning Consult survey reported via CBS News shows that a mindboggling 86% of young americans now want to become online influencers, and 12% already consider themselves one. Strange figures considering only 1% of people on the internet actually create content.

The culprit is likely the media’s endless barrage of reports of million dollar payouts for the biggest stars on Twitch and in pro gaming.

Being a game streamer in particular can be a very lucrative affair, because there’s no doubt about the market for the content. The leading streaming platform for gaming content, Twitch, has over 15 million daily active users who spend an average of 3 hours on the platform a day. Last year, Twitch users watched an average of 46 billion minutes of videos — a month.

So how much do streamers make?

Just like YouTubers, professional streamers have numerous sources of income and a lot of it is not transparent. The game they’re streaming, for instance, could very well have been selected not because they enjoy it, but because they’ve been paid to give it exposure.

An example of a streamer willing to talk about what they make is Twitch streamer Jeremy Wang, who gave Disguised Toast an interview on the subject:

Wang revealed that with over 10,000 concurrent viewers, he makes around $20,000 — and that is excluding sponsorships. The video discusses other streamers as well, and here are some random notables to add to it:

In terms of sponsorships, keep in mind that the success or failure of a game these days depends on whether influencers will play them for their audiences. That’s why Electronic Arts paid Ninja a million bucks to play Apex Legends, and video game related influencers of any note at all are regularly asked to stream video games in exchange for money. More in your face sponsorships like directly selling subscriptions to things like VPNs and other products is on top of all the rest.

While these figures make video game streaming sound like a bright career path, the number of streamers who don’t earn anything at all (or close to nothing) are even more mindboggling.

Qualities of a successful streamer

Everyone wants to have a piece of the pie, but what does it take to make it? Pretty much all of the following:

To be a successful video game streamer, you’ll need to have an interesting personality — or sick skills to make up for it. Fans love watching Dr. Disrespect for his insane tricks, but he’s just as entertaining when he fails because of the hilarity of the over the top character he plays for his streams. Shroud on the other hand has a subdued personality, but consistent insane gameplay skills.

If you want to take the skills approach, ensure you play games you are good at and master avoidance of situations where you could get humiliated. If you want to leverage personality, consider games where you can collaborate with your friends or bring a comedic approach. VR games and silly indie games with bizarre premises can help you here.

Being active on multiple social media helps give you more exposure and offers immense opportunities to engage your fans. It’s more or less mandatory to be present on Instagram and Twitter (and maybe Facebook), but if you crave success you should definitely take it further. Think Discord, subreddits, having your own website (~$10 a month and easy to do with WordPress), etc. You work hard on your content and you’ll want potential fans to be able to notice you and your work no matter how they prefer to use the internet.

Successful streamers don’t just stream when they can: they have developed a schedule and stick to it. If you are passionate about turning livestreaming into a job, you have to approach it as a job and put in hard labor at least 5 days a week. It takes a lot of dedication, but it’s what you’ll need to keep your fan base growing rather than stagnating.

The only exception to the consistency (the #1 tip offered by all the successful online influencers) and multiple pieces of content a week rule is if you’re making something highly unusual or ambitious. Example: Primitive Technology, the man who builds cabins and furnaces and so on from scratch out in the woods with nothing but a pair of pants and some rocks and ingenuity.

Investing in your audience

A good streamer of any kind will be mindful of the need to create memorable moments for fans. Responding to chat and recognizing fans by their username means a lot to them. Recognize and acknowledge regular viewers; they just might end up being your biggest supporters and instrumental to your growth. Also allow and encourage your viewers to clip funny or outrageous moments from your content for their own channels (or to post on communities like LivestreamFail), which can lead to the viral media you need to push your brand to the next level.

Ways to make money from streaming

Getting to a level where you are paid even a minimum wage to livestream games takes effort, time, and the X factor that compels people to keep up with your content. Here are some of the most common ways to monetize video game livestreaming:

Advertising is one of the major revenue sources backing streaming platforms, although some platforms (like D-live) get by without any at all. There is also the issue of ad-blocker addons which are quite pervasive these days in the younger audiences interested in gaming.

These are the streaming platforms to consider if you want to primarily base your income on ads:

Whether you are streaming games via a major platform or from your own website, you should add a donation button and allow donations from your viewers. Donations can range between $1 and thousands of dollars, and frequency and amount will depend on a lot of factors. Will the donors’ names be honored on-screen (“this week’s top donors”) or rewards — and do you or a robot read aloud the donor messages?

While big individual donations aren’t the norm (especially if you aren’t a hot girl), as the number of fans increases, the likelihood you’ll be able to make a consistent and significant income from the feature approaches certainty.

Major platforms already have the donation/tipping feature ready to go for you, but they will take a share of the donation amount. Platform independent tipping services also take a cut, but they tend to be much smaller. StreamLabs is a popular tipping service, and integrates easily with Twitch, YouTube, Mixer, Facebook, Periscope, etc, while offering six different payment options.

Regular donations are of course much better than occasional ones, so this is another great way to make money from streaming. The downside is the platforms will make you jump through some hoops to get the feature set up, and they take a significant share of your subscription earnings. Twitch for example takes a greedy 50% of the total unless you have enough clout to negotiate a better deal.

Setting subscription up on your own, through your own website or external services like Patreon, is safer and allows you to keep more of the viewers’ money for yourself, but you’ll need the technical skills and business savvy to make sure viewers see the value in going off-site to obtain any benefits you’ve set up for them. Give your subs shout outs and features discussed in the “paywalled content” tip.

We’re not talking about renting an arena and risking life and limb in a boxing match. Having pay-per-view and paywalled content you can exploit for some extra money can be as simple as providing access to a full and easy to use archive of of your old content, or just hosting occasional streams and hangouts exclusively for those who pay for this “inner circle” privilege, for example on Patreon. Other gaming specific paywall content tips could be tutorials to specific games and levels that supplement the type of content you’re already doing for free in public.

Merchandise is an important revenue stream for any serious online content creator, and you don’t have to limit yourself to shirts and mugs. Think e-books, special collaborations with fans from other fields of content creations (music producers, game developers, …), and even your own time (exclusive chat or private gaming session).

You also don’t need to order a container of merch from China and doing shipping from your living room. Hundreds of services will happily take care of everything for you, including hosting a storefront, for a cut of your sales. Comparing all of these services is beyond the scope of this article, but check to see if your streaming platform already has an inbuilt merch feature like the YouTube merch shelf.

Sponsorships and brand deals are another great way to engage your viewers with your live streams. If you have a large user base on the streaming platform and you have created a name for yourself in the industry, brands will reach out to you with exciting offers. Even if they don’t, you can reach out to them if you have the potential for the same. Either way, when collaborating with brands, they expect you to be detail-oriented and professional with your work. You might also have to negotiate the deal to get the best out of sponsorships.

Some ways to make money game streaming through brand deals include:

Being part of an affiliate program that you to earn a commission every time one of your viewers buy the products you’re promoting. It doesn’t have to be a link in the description (which, by the way, we have heard can get you punished by the YouTube algorithm), it is often be a convenient promo code people can type in at checkout to take advantage of a special discount.

Compare big streamers to no viewer streams and you’ll see that luck doesn’t have anything to do with success in the streaming world. The successes implement 90%+ of these tips, and the failures few or none of them. Barring the one significant threshold of possessing either an entertaining personality or sick vidya game skills, hard work is all that stands between you and some of the big money sloshing around in video game streaming.

Check out StreamHash for more tips on how to make money livestreaming games (SH also sells livestreaming software), and drop a comment below if you have something to add of your own.

Learn how to bait LivestreamFail and you’ll make it 100%. Don’t even need personality or anything, just a webcam and the ability to disregard your human dignity.