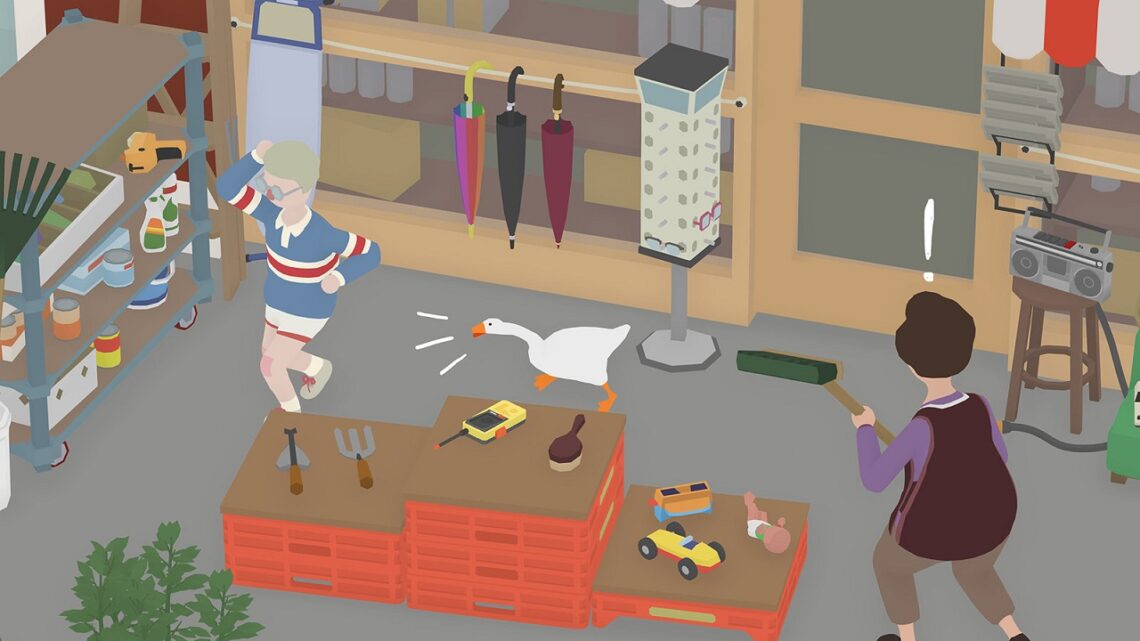 Video game protagonists come in all forms, from burly space marines toting massive machine guns to foxy cave-exploring vixens. But one of 2019’s most anticipated titles finally gives you the opportunity to play as… a goose.

Untitled Goose Game, the second release from Australian developers House House, is an unlikely prospect for success. Their previous title, Push Me Pull You, was a charmingly weird sports game where pairs of players control odd worm-like people with a head and arms at each side, cooperating to bring a giant ball into a goal while your opponents try and wrestle it away from you. It’s a fun experience, but very different from what would come next. 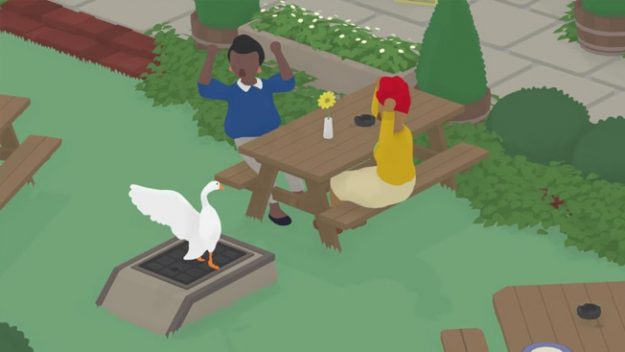 House House dropped a trailer to introduce the goose out of nowhere in October of 2017. At that point, the game was just titled Goose, and the footage featured a single on-screen prompt: press X to honk.

In the three-minute trailer, the basic world of Untitled Goose Game is laid bare. You’re a goose, and you have things to do. For the trailer, it starts with getting into the garden and soaking the unwitting groundskeeper with a sprinkler and ends with the goose having a picnic of purloined items. The gameplay is clear and funny, illustrated with flat-shaded polygons colored in soothing tones. It was easy to understand and bursting with possibility.

And it caught on big. The Tweet with the video racked up nearly 14,000 shares. The initial pre-alpha trailer has 667,000 views. That’s huge numbers for an indie studio with just one other game under their belt.

The origins of Untitled Goose Game were deeply simple: House House partner Stuart Gillespie-Cook went into the company’s Slack channel in August of 2016, posted a picture of a goose and wrote “Let’s make a game about this.”

People think game development means you get to play games all day, but they're wrong – it means you talk about geese pic.twitter.com/I8XvTWy7b1

A few months later, the team came back to the conversation and realized that they could, in fact, make a game about that. From those simple beginnings, Untitled Goose Game was born. Over the next three years, House House would conduct a master class in marketing, keeping fans excited about their stealth honker by doling out updates. 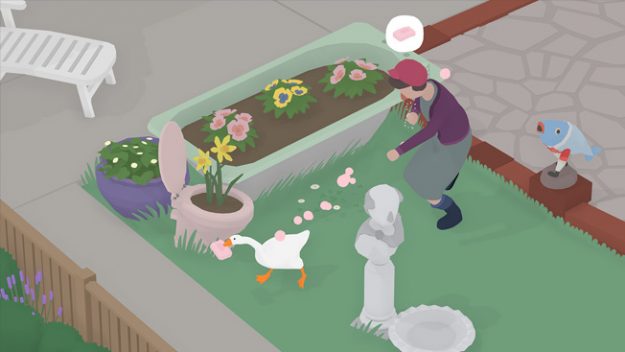 What makes Untitled Goose Game so compelling? There are a few excellent reasons.

First off, the game performs a clever blending of the familiar and the strange. The basic game loop that players are performing is instantly recognizable to anybody who has played Metal Gear Solid or other stealth games. Your goose is physically less powerful than the farmers and other humans that populate the world, so you need to use subterfuge to distract their attention so you can do what you want.

Solid Snake has numerous tools to aid in his sneaking, from cardboard boxes to tranquilizer guns. The goose, by comparison, has just one: a honk. The minimal mechanics immediately catch the player’s attention, making each area a puzzle that can be evaluated visually and mentally explored without ever picking up a controller.

In addition, the environments presented in those early trailers were rich in interaction despite their visual simplicity. Nearly everything on the ground could be interacted with by the goose – faucets could be turned on, vegetables pulled out of the ground, doors and gates opened and closed. Just looking at screenshots of new areas had your imagination running wild with thoughts of how the goose could sow chaos there.

Other similar games have benefited from the same kind of Twitter marketing. A developer who goes by the pseudonym “punchesbears” on Twitter has racked up tons of views and press coverage for his goofy demo videos featuring physics-generated animations and woodland creatures.

House House also didn’t go overboard with social media. After the huge splash of the first trailer, they mostly kept quiet on Twitter for the next six months as they worked on the game. The developers knew that the best way to kill a funny joke is telling it over and over, so they kept their cards close to the vest. Aside from gameplay demos at a handful of events, it was hard to see more of Untitled Goose Game until its platform announcement.

Too Many Eggs, Too Few Baskets

Marketing an independent game is a difficult proposition in today’s world. The Switch alone has thousands of titles, and Steam has over 30,000, nearly two dozen new ones added every single day. It’s very hard to stand out from the crowd. Making matters worse is that there are only a few vectors that can elevate games out of the pack. There’s the initial appearance on a store’s new releases page, and then you can drop the price and cut into your profits to juice sales, or get lucky and wind up on a curator or editor’s page. Aside from that, once your game gets swallowed by the swamp it might as well be lost forever.

Untitled Goose Game has a few advantages there as well. One is that the game’s subject matter is unique. There are hundreds of zombie shooters on Steam, and if a customer is looking for one in particular it’s almost impossible to pick it out from the crowd. Somebody searching for “goose,” though, is going to have just one result (or two, if there’s a Top Gun game. I haven’t checked). That makes discovery way simpler.

Of course, all the viral pre-release publicity in the world doesn’t guarantee strong sales. Think of games like No Man’s Sky, which had an incredible amount of buzz for its procedurally-generated universe but ended up disappointing fans on release. But that game had a pretty significant disconnect between what players thought they were getting and what developers ultimately shipped. We don’t see that being a problem with a goofy stealth game about an obnoxious bird.

It still remains to be seen how Untitled Goose Game is going to perform on release. But House House’s clever harnessing of meme culture and social media have given it a leg (and a webbed foot) up on the competition.