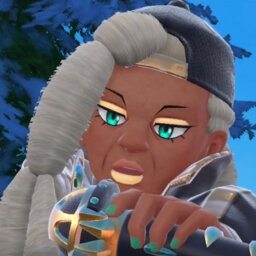 I know the shit you are about to read is fanfic tier but hear me out, we know that the game was rushed but what happened to the characters, they were good in previous games? well, my theory is that characters were mostly done to mock and to convey the disgruntlement of the Game Freak employees, let’s start with the well designed and pretty characters,Iono, Poké Goku and the psychic woman, they are just the waifus, they made them for moral support, Larry is the representation of the Game Freak employee,an overworked man overworked,a normal type gym and flying type e4, then come the ugly characters, Ryme was made to mock their bosses for asking them to include minorities and such, stuff that the normal Japanese man does not care about made for the sole intent to appeal to the westoids, so they made the ugliest black in the franchise with the most retarded theme, a black woman rap singer, and an ugly one at that, made to make the fans not want non japaneses in the games, a sort of damage control after SwSh, the rest are forgettable, then comes Geeta, same point as before, made ugly and weird looking with the extra effect to make her super disappointing by giving her the shittiest champion team ever, to make their final goal to have a male art director again, basically firing the lesbian, and to stop the inclusion of (sorry for the term) wokisms, they are basically trying to sway some stuff so their bosses see the analytics that say the black and the indian characters are bad and the people don’t want more of them, and it came at the right time were Musk bought twitter where more racey stuff can be said
Forgot about Penny, made her kinda shit on purpose to make the public say they don’t like her cause woke (she has nothing woke in her design but gives of the energy, especially with the double coloured hair), same as the point before really