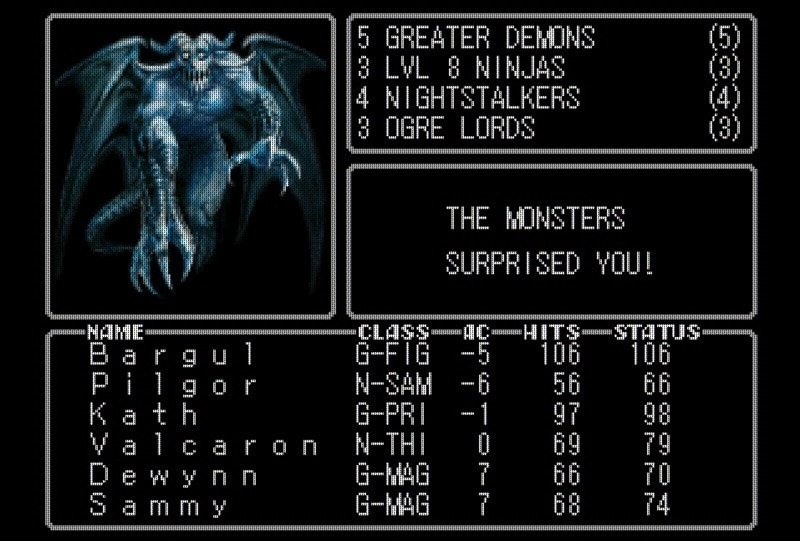 We've all had those moments where we rage quit a game that seems nearly impossible to beat and go back to casual games. Sometimes you just need more practice, and other times you might need to level up.

But there are some games that are undeniably difficult no matter how you slice it, and the internet is full of angry anecdotal evidence for it. Challenging gameplay is precisely what makes video games fun, but everybody has a different barometer for what's acceptably hard and what's complete and utter bullshit.

Whether you're a hardcore gamer up for the challenge, and here's a list of hard games for you if you are, or you just want to see a list of games to avoid, here's our top 10 damn near impossible to beat video games.

The early games in the Wizardry franchise are notoriously hard to beat. Don't believe us? Search a video game forum for posts mentioning "wizardry" and behold something rare indeed: all gamers agreeing on something. 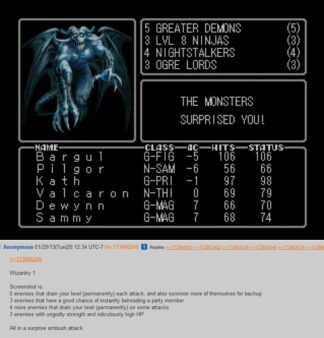 Wizardry IV: The Return of Werdna, which was released in 1987 for home computers, was particularly hard to beat. Robert Sirotek of Sir-Tech Software admitted that Wizardry IV "was insanely difficult to win" in a 2014 interview.

"I felt that it went way beyond what was necessary in terms of complexity, but the people that developed it felt strongly to leave a mark in the industry that they had the hardest game to play — period, bar none," Sirotek said.

Return of Werdna required players to have knowledge of the previous Wizardry games. The game was also unforgiving in that if offered no experience points and no way for players to strengthen at their own pace -- you were at the mercy of insanely powerful enemies.

"Return of Werdna was the worst-selling product we ever launched," Sirotek said. "People would buy it, and it was unplayable. So they’d put it down, and word spread around."

Tetris: The Grand Master 3: Terror-Instinct is an arcade game exclusive to Japan, and it's one of the most hardcore Tetris games out there. If you'd rather play the classic version, you can play Tetris for free on SilverGames.com,

This game is faster than its predecessors, and you need to play a perfect game to become a Tetris Grand Master. That's not an easy task, and there are only a handful of people who have actually achieved the status of Grand Master, according to Polygon.

But it's more than just the fast pace that makes this game difficult -- after a while, the Tetris pieces will become invisible, forcing the player to remember where they've placed their pieces.

This isn't your run-of-the-mill Tetris game.

Crypt of the Necrodancer in Coda mode

Crypt of the Necrodancer is a hard game in general. If you haven't played it, it's kind of like a chess game except it's randomized and you have to move according to a beat.

But Coda mode makes Crypt of the Necrodancer even harder, forcing players to play 100+ turns a minute to the beat, and one single wrong move or missed beat could be fatal. And at certain points during the game, you'll need to move at 350 bpm, which is about 6 inputs per second -- all while playing flawlessly and without missing a beat.

The early King's Quest games are beatable now because of the widespread proliferation of game guides on the internet, but in the late 1980s and early 1990s, that was a different story.

The King's Quest games are notorious for their obscure, convoluted puzzles. These puzzles would require you to use certain combinations of items and action combos until something worked. However, the game would let you use important items even if you needed them to complete a quest later in the game.

In other words, King's Quest had a ton of dead ends, and sometimes you wouldn't even know you've triggered a dead end until you've already invested hours upon hours into the game.

In total, King's Quest V had over 20 dead ends. How was anybody supposed to beat these games without a guide?

Most games in the Metroidvania genre only require players to collect items to progress through the world, but that's not the case with La-Mulana, which also required the player to solve several incredibly difficult riddles to progress.

Players have reported that even with walkthroughs and guides, the puzzles were still challenging.

La-Mulana was originally released in Japan for Microsoft Windows in 2005, and it was inspired by old-school MSX games. The game also had an international release and a graphical upgrade when it came to the Wii (and ultimately other platforms) in 2011.

However, the game was so difficult that the developers had to tone down the difficult for the English release.

"We decreased the difficulty level," the developers wrote in a blog post. "I mean, what can we do. We have to consider WiiWare’s players."

What happens when you mix roguelike elements with a bullet hell shooter game? You get Enter the Gungeon.

Enter the Gungeon is a extremely fast-paced game and requires players to dodge giant waves of bullets. In other words, you're going to die a lot.

Of course, seasoned players might not think the game is too difficult, but don't take my word for it -- early every review of Enter The Gungeon on the internet mentions its hard difficulty.

"The only part of Gungeon that will surely turn off some people is the difficulty," Destructoid reported. And EGM's Spencer Campell reported that "there were a few times that I yearned for for an easier difficulty."

This is a game that definitely requires a lot of practice, progression, and skill in order to overcome its difficulty curve.

FromSoftware has a reputation of developing incredibly difficult video games, from Demon's Souls to Dark Souls, and now their 2019 game Sekiro: Shadows Die Twice, which players report as FromSoftware's hardest game yet.

And no, Sekiro doesn't need an "easy" mode. The game was intended to be insanely hard, with deadly enemies and even more deadly bosses that can kill players in two hits. You're meant to die repeatedly in order to slowly learn your enemy's patterns.

Sekiro is incredibly difficult, but skilled players have been able to beat it -- their advice to you would be to "get good."

You've probably heard of the classic NES game Battletoads and its insane difficulty, but it's harder than you think. Thousands of gamers have memories of playing this game but few ever beat it.

If you're not playing this game with an actual NES cartridge on a CRT television, you need to execute multiple near-impossible frame-perfect moves throughout the game.

And forget near-impossible to beat -- this game is literally impossible to beat in co-op mode. In the Clinger Winger stage (which is hard enough already), there’s a glitch that makes player two’s controller inactive, forcing them to sit there and die. This glitch is an understandable oversight from the developers -- even if you do decide to play with two players, it's unlikely that you'll get that far anyway.

The worst part is the game was pretty innovative and fun up to a point. The hoverbike level gets most players every time, there’s just too many obstacles to dodge (over 100) and they come almost too fast -- the level is only about 2 minutes long. And if you did manage to beat the hoverbike, you advance to the surfing level and basically have to do the whole thing over again, only with more obstacles and at a higher speed. If you love platformers and you’ve never played, it’s worth checking out just to see if you have the rarefied reaction time to actually beat it -- but you won’t.

I Wanna Be the Guy

I Wanna Be the Guy is hard in the most unfair way possible. To the naked eye, IWBTG is just a typical platformer, but you'll quickly learn what you're up against after you've died a few times in the most surprising and bullshit ways possible.

IWBTG is a parody of video game difficulty by offering completely unfair challenges that are intended to make the player laugh at the various ridiculous deaths you must suffer through.

If you're familiar with all the patterns in the game, you can fly through it in under an hour. But if you're a new player and you're still learning, you'll need to buckle up for a wild ride.

In this classic, you’re a knight names Arthur who must fight his way to a castle to save a princess. Where have I heard that before? Only unlike some other princess- saving quests, Ghosts and Goblins was rage inducing not joy inducing. One hit and your armor was gone, leaving you running around in your underwear (literally) waiting to be hit again and killed. A death that would -- since the idea of checkpoints hadn’t occurred to anyone yet -- send the player to the start of the level.

Many things about this game were sadistic, but two of the worst were the spastic movements of enemies you were trying to hit and the fact that when you jumped you had to respect the laws of physics and not turn around in midair -- like some other, more enjoyable, princess-saving games allowed.

Super Ghouls 'n Ghosts was the Super Nintendo remake of the previously mentioned equally-difficult NES game of the same name.

Super Ghouls 'n Ghosts has the perfect recipe for an unfair, difficult platformer -- merciless enemies that respawn, flying creatures, and an unforgiving environment.

And you can forget about healthbars -- if you don't have armor on, you will die in one shot, and there is no shortage of enemies and hazards that endlessly fly toward you.

And when you do manage to make it through the grueling levels by memorizing every single enemy location and attack pattern, you'll have to do it again. That's right, you can't actually fight the real final boss until you've played through the game a second time.

The first of many games based on the Teenage Mutant Ninja Turtles may have been a commercial success and named game of the year by Nintendo Power but it is hands-down one of the most infuriating games ever. Available on NES and PC, each with their own fatal flaw, the NES version had no save function so it was a one-sitting completion or bust, while the PC version had a level which could not be beat, literally.

Whenever you tried to jump a particular gap you would hit you head and land in the sewer -- which would kill you.

There was so much hype around this game, so much excitement before playing that was all lost after the first couple of hours or replaying that first water level—it’s amazing this game didn’t kill the whole TMNT franchise.

So which of our picks have you played and how far did you get? Did we leave out any egregious examples of difficult games? Speak up in the comments.