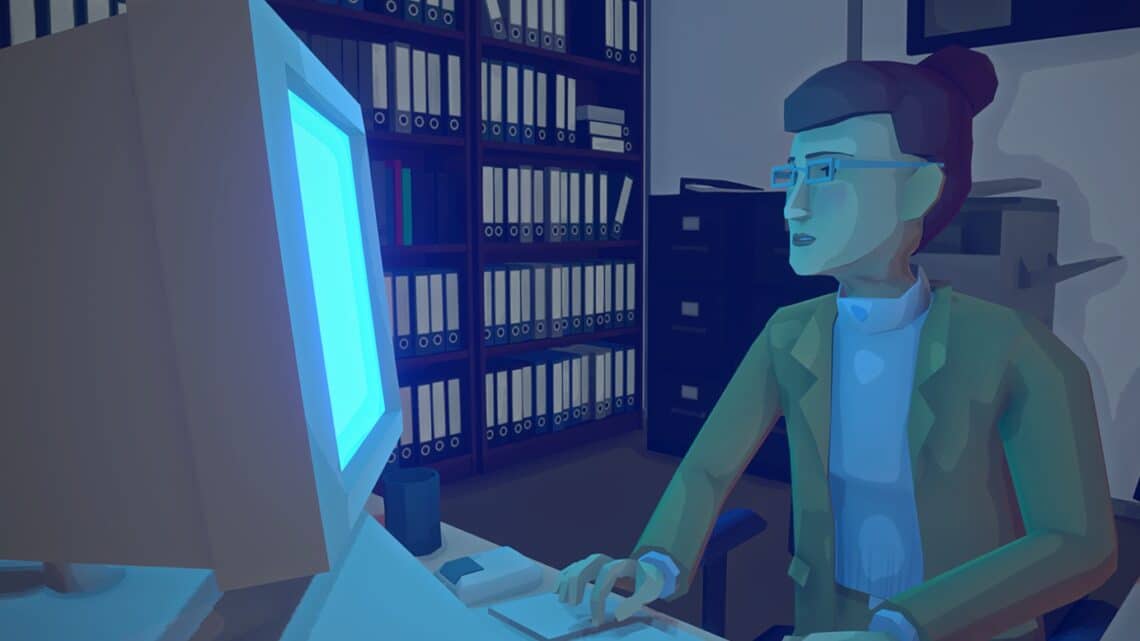 To most people, a story-driven video game without any dialogue would be considered limiting. It would be even worse if said game had low-quality graphics, minimal gameplay, and replayability.

To journalists who have sipped a few too many times from social justice’s chalice, however, such a game would be considered progressive and game-of-the-year material. Especially if the game’s narrative—what little of it there might be—revolves around social justice.

Since gamers are the majority, it’s no surprise that the public feedback to the latest indie darling, Virginia, has been fairly negative. Most feel that the game held the promise of being a lot better than it actually was, but that the completely on-rails nature, coupled with jarring time-lapses, made it a confusing, if disappointing mess.

Designed to be akin to a silent film, it’s hard to really tell what’s going on given the lack of cues, non-chronological storytelling and sudden dream sequences. Virginia tries to kindle any nostalgic feelings you might have for ‘90s TV shows like the X-Files and David Lynch’s Twin Peaks, but it fails to grasp any of the aspects that made those shows great: namely the chemistry between the characters.

Game journalists love it. It has reaped commendations from the likes of IGN, Polygon, The Verge, Time, VICE, and ZAM. They praise the game for all the qualities that would bore most gamers—the lack of interactivity or a coherent narrative that would turn off anyone who holds the medium to a higher standard. 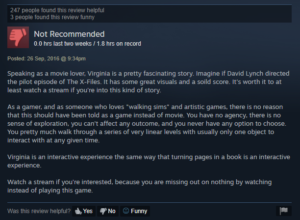 It wouldn’t be an issue if the game weren’t being pushed so favorably by the favorable press, which deludes people into purchasing it. Those buyers invariably get upset and demand refunds.

Many panned Virginia for refusing to use any of the medium’s conventions—interactivity, exploration, and agency. Less than a “walking simulator,” Virginia is a “watching simulator.” Given the game’s short length, many unhappy gamers solicited refunds for the title, leading vocal game critic Jim Sterling to create a video accusing the game’s detractors of bigotry.

Based on a few comments he found on various Internet websites decrying the game as “SJW propaganda,” Sterling went on to aggressively defend the title as being “just a game that has a black woman as its lead. Other than that, it’s a weird adventure game with loads of symbolic oddity compared to David Lynch’s work, and that is all.”

Sterling, who doesn’t seem to have actually played the game, says that there’s nothing in it about feminism or race. If he did, he’d have known about the game’s true narrative—and not just the one about ‘90s throwbacks and murder mysteries that its developers advertise on Steam.

Virginia is literally about social justice. The two main characters are black women, and that’s completely intentional. The story revolves entirely upon the main character’s struggle with her identity as a black woman in the FBI. Though the visuals are heavy in symbolism, the game’s message is clear. You’re an Internal Affairs snitch who gets other FBI agents fired from their jobs—all of whom are people of color. Through flashbacks, you learn that the protagonist rose through the ranks by selling them out and she feels guilty about it. The mystery of the missing child you’re sent to locate has very little bearing on the narrative, and the game ends with the discovery that he was abducted by aliens. None of it makes any sense.

In spite of its story, most gamers’ criticism revolved not around its message, but for how it lacks all of the qualities that make games what they are. There is little doubt that Sterling’s video is the first of many complaints about gamers and their plebishness from the gaming media.

Virginia could have been decent despite its message, but everything from the half-baked plot to the complete lack of gameplay ensures that it isn’t. Far be it for anyone to criticize it without being called a racist misogynist, though.

[…] on having four male characters. And criticizing a boring “walking simulator” like Virginia causes certain games critics to produce entire videos ranting about the two or three errant comments complaining about the nature of its content, and none of the […]

The great walking simulators vs. murder simulators debate is over – Ganker

[…] we want to talk about video games that are actually boring, why not mention the failed walking simulator Virginia. Critics of the game should all agree that Virginia would have been way more fun if players had the […]

[…] But when considering how video games have affected the rest of popular culture, especially film and television, it is clear that the way games are played has made a greater impact than the stories they tell. The idea of a virtual world without consequence, changing human behavior, negating empathy and fear is deeply compelling and effortlessly explored by video games. Any medium can tell a story, but games actually force the audience to participate in the twisted morality play (at least the ones with actual choice). […]