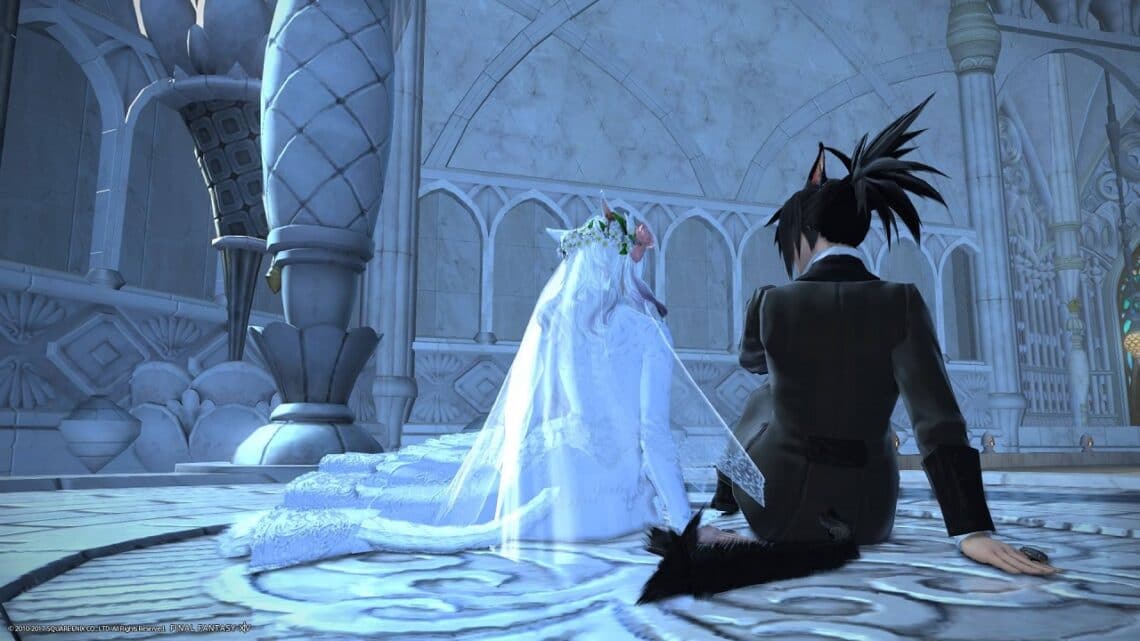 Heidi met John playing Final Fantasy XIV. They were part of the same Free Company, and would often help each other out with quests. Getting to know each other, the pair soon realized they had plenty in common, and began to spend more time together. “Seeing his name light up when he logged on brought a huge smile to my face,” says Heidi. John later tells me that he spent weeks carrying his laptop around at work or college on the off-chance she signed in.

Eventually, John drove from Tennessee to North Carolina to meet Heidi in person. They spent a week together in which time they realized they weren’t just dealing with “a silly internet romance,” and within two months they’d moved in together. Within a year their daughter was born, and now they’re “one big happy family.”

Stories about players like Heidi and John are increasingly common. MMOGs are by nature online social spaces; players are reliant upon each other for progression. With millions of people questing, trading, raiding, and forming guilds together, no wonder they form fast friendships and even romantic relationships with those on the other side of a screen.

FFXIV has even incorporated some aspect of this idea. It offers players the chance to have their characters married in an ‘Eternal Bond’ ceremony. Far from simply being a pleasant experience, an ‘Eternal Bond’ offers all the stress-inducing tedium of an actual wedding ceremony. Players need to register, book a time slot, send out invites, and can even pay to personalize their ceremony. If you can get through all that together then perhaps you really do have what it takes to be eternally bonded.

Yet despite living in a time when more and more of us are meeting online thanks to dating apps like Tinder and Bumble, a stigma still lingers over those whose relationships start off on the fields of Azeroth and beyond. It’s a strange admission for a gaming website, but for a long time I went to great lengths to keep my gaming habits distinct from my social life. The thought of any woman I fancied finding out about my nightly forays as McFearless the Undead Death Knight was more terrifying than any raid boss. 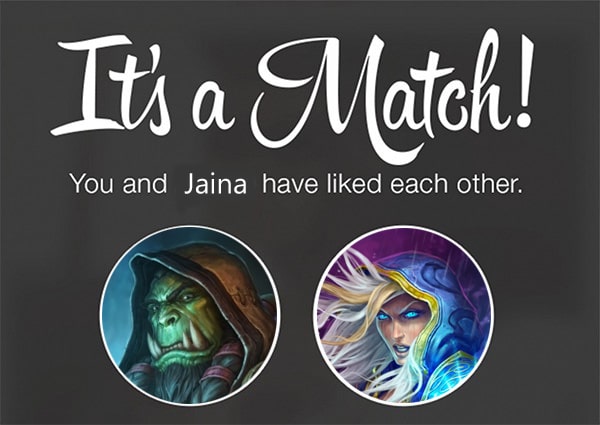 Sarah and Paul met playing World of Warcraft 10 years ago, not long after the release of The Burning Crusade. Paul had been the guild leader of a competitive raiding guild which had transferred to her server and, not long after Sarah had joined the guild as a healer, the pair hit it off when they organized a duel to test her skills.

They began to go on dates in the game. “Staying up all night together just sitting in Shattrath City talking about life,” Paul recalls, or “levelling fishing together while we talked.” Eventually, this gave way to talking over the phone for hours on end to the point that Sarah “would have to keep an extra cordless phone charged so I could swap them whenever the batteries died.” It’s a familiar dating pattern; you get to know each other, you get obsessed with each other, and soon it’s difficult to imagine your lives as separate.

Of course, dating online is not the same thing as dating in-person. Dating through avatars creates a degree of distance you don’t usually have. Curating your image is easier and, while some may see this as dishonest, many of the people I talked to saw this as a way of affording themselves the confidence to relax. World of Warcraft allowed Lucy to get closer to an acquaintance she had known for some time in real life but had lacked the confidence to get to know otherwise. The pair played on a roleplaying server and decided that their characters would fall in love. Their avatars’ relationship would eventually bleed over into real life and, almost seven years later, Lucy and her partner are still together and still playing World of Warcraft.

John is open about how he finds “the detachment of an online avatar a much more comfortable way for me to meet new people.” The biggest draw is that he can simply leave a situation he finds unpleasant. “I know that level of detachment or anonymity could deter some people from ever feeling close to someone else online, but I really like having that buffer zone. It allows me to feel much more comfortable in my interactions with others.”

Heidi is a bit more candid: “It’s a lot easier for a nerd like me!”

Relationships are often messy things, and problems don’t always go away when you log off. Friends and relatives also take an interest, and perhaps this is even more true when relationships are taking place in a game world alongside millions of other players. As Sarah and Paul’s relationship began to take up more time, Paul began to neglect his guild duties. “He was the guild leader with all the responsibilities of the raid team since he was the raid leader as well, so you can imagine how us talking so much would take all of his time,” says Sarah. “He started not caring about the raid team as much, and raiding in general for that matter.” 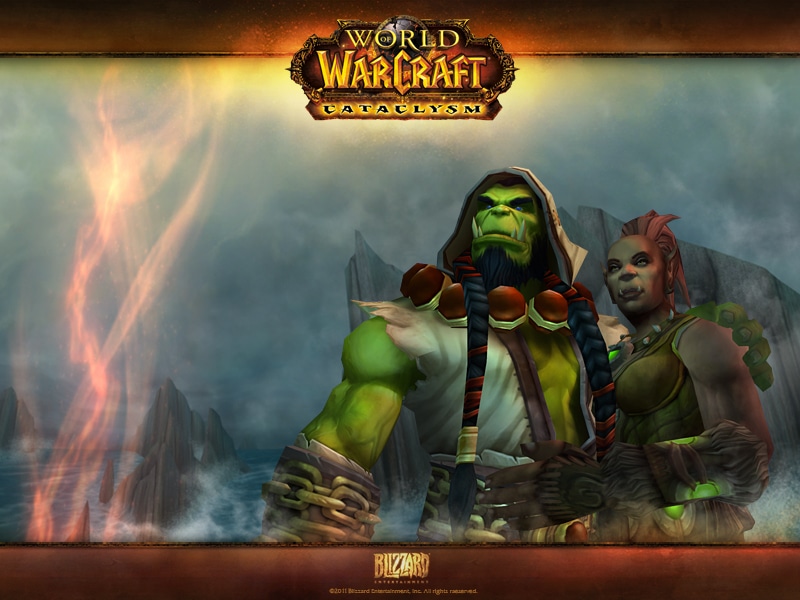 At the highest level of World of Warcraft, raiding end-game dungeons becomes many players’ raison d’être. Players need to co-ordinate styles and equipment in a way that means raid groups dovetail. Strategies for each encounter and boss battle have to be devised and memorized by every member of the team, and all that comes before you cover the logistical nightmare of ensuring forty players with commitments outside of the game can be logged in for hours at a time. So when Paul took a step back, the bottom quickly fell out. The raid team fell apart and the guild all but disbanded. As Sarah puts it to me, “They needed their leader, but their leader decided he needed me.”

Sarah soon found herself cast as the Yoko Ono of WoW, being blamed for the dissolution of what has been a successful raiding guild. Many accused her of stealing Paul away from the guild, others characterized her as an attention-seeker, and others had even worse things to say. The pair had to leave and found themselves drifting from guild to guild with a group of friends who left with them, hoping to find a new place to belong. Paul would never lead a guild again, despite liking the idea of it. “It just takes too much time away from a relationship.”

Paul and Sarah still game together, although they have since swapped from WoW to FFXIV, but their approach is far more casual. “It was always hard after that for us to be hardcore on any game together,” Sarah explains. “Raiding as a couple is difficult, because you are a package deal. If one leaves, you both leave. Most folks don’t wanna deal with that stuff.”

Eventually, most of these relationships have to transfer from the virtual world to the physical, and with that comes obstacles like distance. Being able to bend the forces of the arcane to transport yourself across dimensions in-game doesn’t count for much when there’s a continent between you in real life.

In John and Heidi’s case they were lucky: John was happy to drop his life to be with Heidi. While to Heidi and her friends it seemed “some grand thing to just uproot like that”, to John it didn’t feel so unusual: “I’ve moved every three years my whole life. I just always liked uprooting I guess.” Others I speak to are not so lucky. One couple tells me of the troubles they face due to one of them living in the UK while the other is in Ukraine. The language barrier proved a hurdle, but the far more challenging obstacle is visa issues and travel costs.

Sarah tells me how at first she “was definitely full of anxiety when he pulled up and I saw him hop out of his big red truck.” But surely everyone goes into a first date with an all-consuming sense of dread. It took “about ten minutes” to realize Paul was the same guy she’d been speaking to for months, but they “fell into place with each other easily.”

Like John and Heidi, Sarah and Paul were separated by state lines and hundreds of miles. But they also had other problems. The game that had proven a blessing in allowing two people divided by such a vast distance to fall in love couldn’t do anything about certain real-life obstacles. At the time of Paul’s first visit, Sarah was 17 (which in America is legally underage), and was still living at home with her parents. Once she turned 18 she would move to live with Paul and, although her family had been tolerant of their relationship at first, once Sarah flew the coop her mother began to resent Paul, feeling he was “the devil incarnate” and had taken her daughter away from her.

Over the next decade Paul and Sarah would face other obstacles such as subsisting on “poverty-level of income.” The couple “always had enough to keep gaming, which helped us take our mind off stuff” says Sarah, but now both have jobs they enjoy and the pair are far more stable financially and personally. It’s taken them a long time to get from WoW to where they are today, but for Sarah it was worth the struggle. “I couldn’t be happier with our life together. He is the best thing that ever happened to me.”

Editor’s note: The names in this article have been changed.