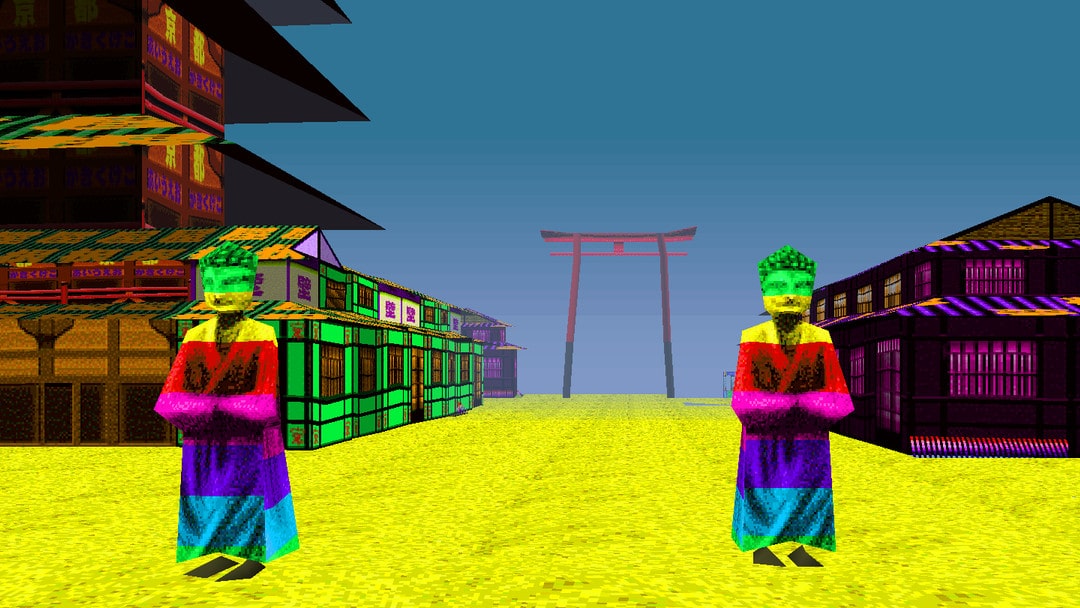 Imagine walking on a pedestrian bridge. You're surrounded by darkness, which prevents you from seeing the end. Below you is a fog and more nothingness; behind you, a mirror image of what's in front of you. You don't know how you got here or where you are. All you know is you must keep walking forward.

Eventually you see the end of the bridge: inside the mouth of the sun, which by the way, has a face with eyes and a nose. In a panic, you run towards the railing, and the moment you touch it, everything turns white and you're transported to the middle of a grassy field with a neon green sky.

This trippy nightmare scenario is a typical sequence in the forgotten Playstation game, LSD: Dream Emulator.

"LSD" is not a typical video game. There is no dialogue. Every step you take is met with an annoying loud thump, and the synth-heavy soundtrack changes with every location. There is no objective. There is no antagonist. You can't even jump. But the experience perfectly captures the bizarreness and surreality of the dreaming world. 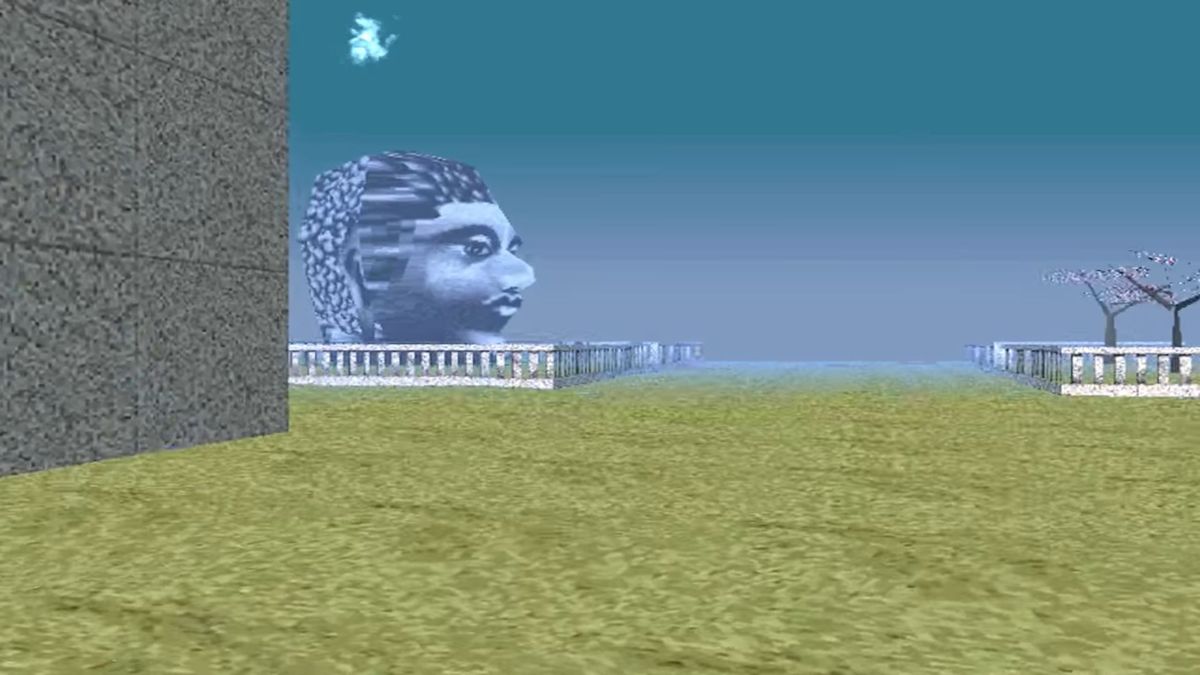 The game allows players to explore a bizarre dream world "day-by-day," for 365 days (think Grand Theft Auto's open-world combined with the spookiness of a Japanese horror film and Minecraft graphics). A dream lasts for ten minutes, or until you "die," which happens by running off of the games' randomly placed cliffs. From there, everything resets and you're placed back at the starting point.

"LSD" was released in Japan on the Playstation (or PS1 for you kids) in limited supply in 1998. Designer Hiroko Nishikawa based the entire game off a personal dream journal that contained ten years worth detailed subconscious experiences.

Their influence is obvious: Although there is no traditional story, everything the player interacts with creates change. Any wall, bannister, person, animal approached and touched will make the screen fade to a solid white, blue or red and whisk you into a new dream.

The experience plays out like a lucid dream: Little handholding takes place, and no real explanation is presented as to why the world is so bizarre. You'll often revisit a familiar setting, and slowly notice small differences — a wall could have a face or appear as if Jack Torrance tagged the room in neon Japanese lettering. It's an experience that reflects that of a dreamer realizing he or she is actually dreaming. 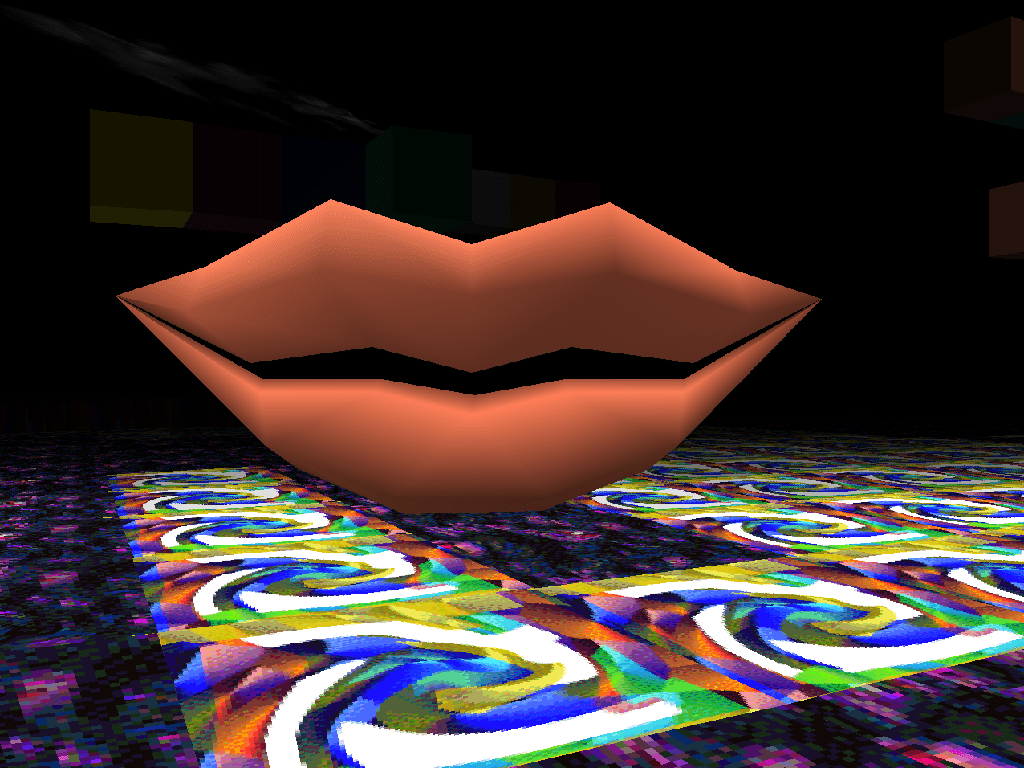 Of course, bizarre encounters pop up, too. It starts with the small stuff: a sun that glimmers like a supernova, a boy with no visible features chasing a hoop with a stick, or a sumo wrestling match. Then it gets weird: sunken freighters in the middle of a field, a giant face with tiny arms and legs behind a bar. And then the terrifying: the gray man, a shadowy figure who follows you and vanishes suddenly when approached, or the hanged women who dangle ominously from street lamps. The game's rudimentary graphics don't subtract from the spine-tingling.

Why create a game that really isn't a game but a simulator of our night time experiences? The closest thing to an explanation to any of this was Nishikawa's book, LSD: Lovely Sweet Dream. Released the same year of the game, the book features text (in Japanese and some in English) from Nishikawa's original dream journal, complete with mind-bending illustrations to match. Clearly her subconscious ramblings are of great importance to her.

And they clearly resonate with gamers. LSD's eccentric, immersive style has become sort of a holy grail for hardcore gamers. Since it was never released in the U.S., the game sells for $200-$300 on eBay for imports. But hardcore fans have dedicated faithful remakes that you can play online. So now you can experience someone else's dreams and make new nightmares of your own.