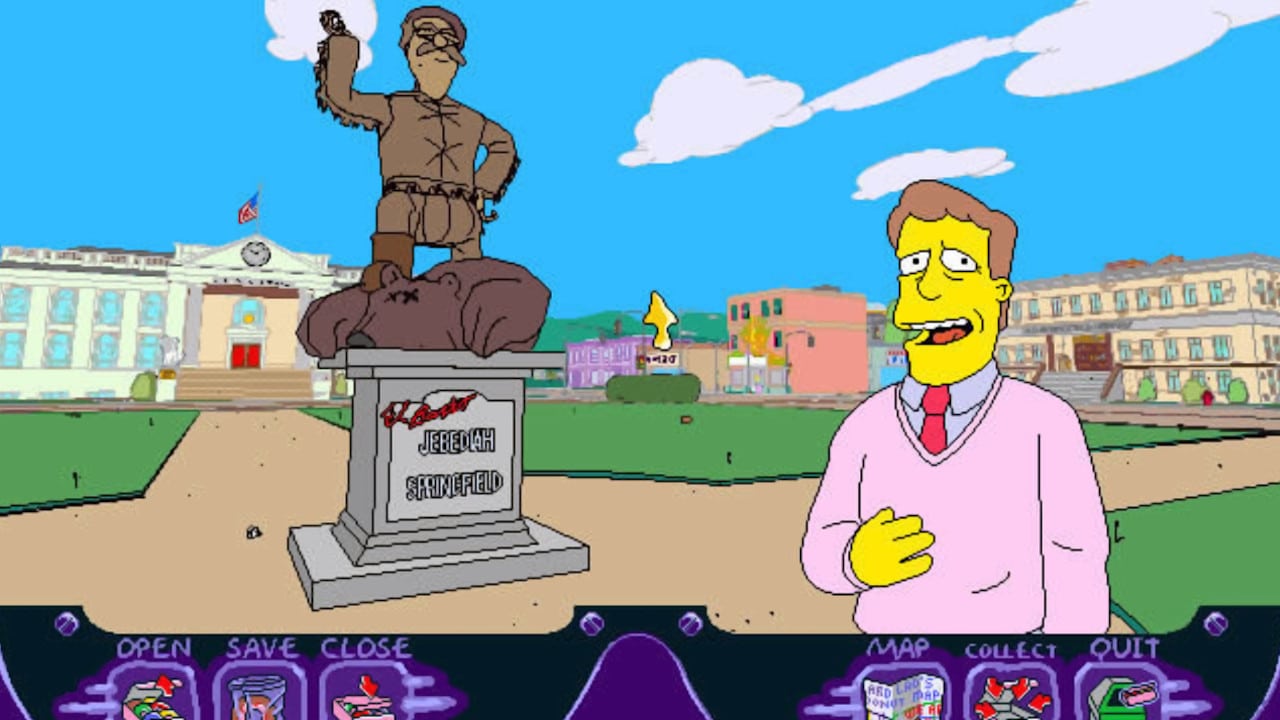 Here’s a pitch for you: an interactive experience in which players are free to explore Springfield, the bustling hometown of The Simpsons, in virtual reality.

In spite of the series’ steady decline over the past 15 years or so, I’d wager that more than a few of you would be queuing up to buy such a game were it launched tomorrow. Just imagine, then, how tantalizing a prospect this would have been back in the series’ mid-90s peak – with classic episodes such as Homer Badman, Who Shot Mr. Burns?, and The Itchy & Scratchy & Poochie Show still fresh in the memory.

This was effectively what Fox Interactive served up with the launch of Virtual Springfield for PC and Mac in 1997 – though back then, the VR side of things required a little more imagination on the player’s part. 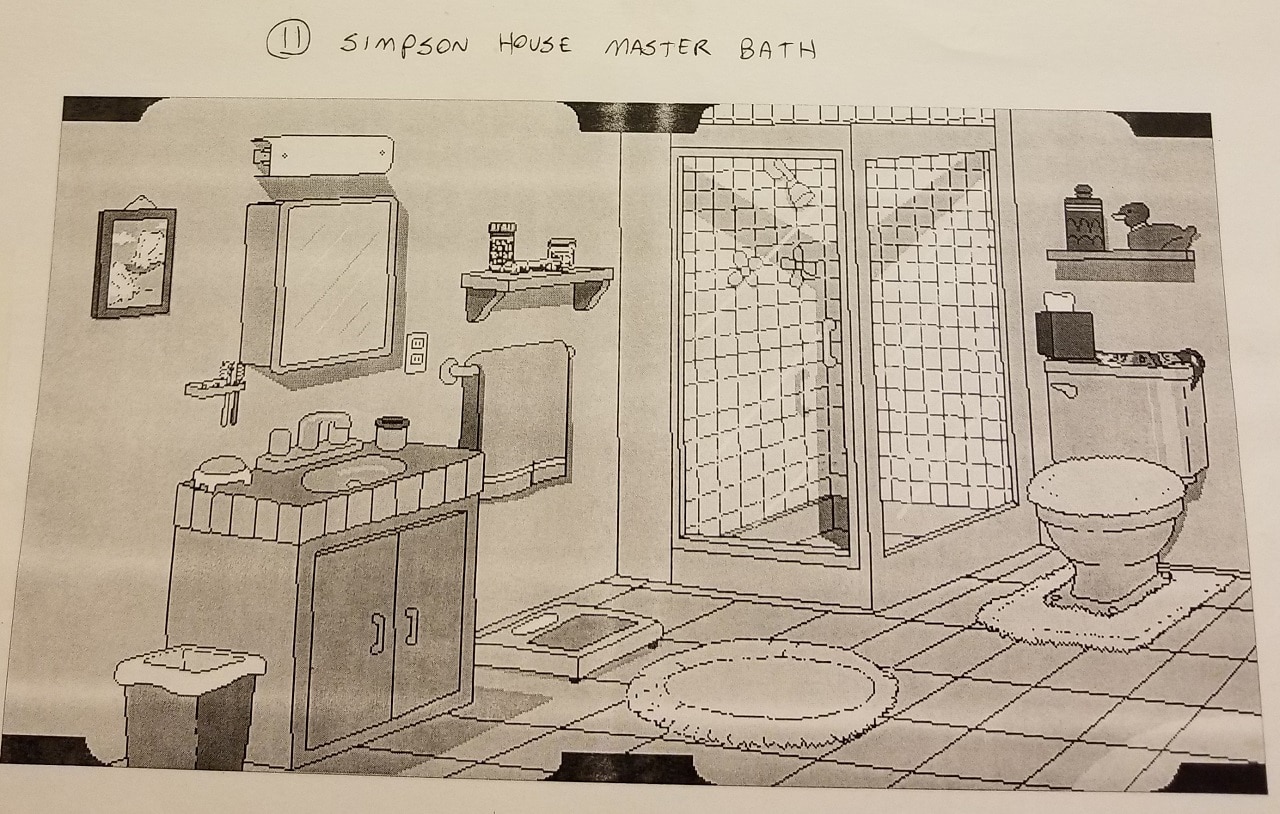 Development began in 1994, by which point there had already been several video game adaptations of The Simpsons. They spanned numerous platforms, genres, and levels of quality, but none captured what made the series so great. Itchy & Scratchy in Miniature Golf Madness deserves credit for riffing on less obvious characters from The Simpsons universe, but its protagonists’ joyfully sadistic personalities fail to shine through. Bart Simpson’s Escape from Camp Deadly took a step in the right direction by loosely basing its premise around the classic episode Kamp Krusty, but it too plays like a game that merely happens to feature characters from The Simpsons.

Virtual Springfield sought to buck this trend, and that ambition was writ large in its name. In fact that title – and the target platforms of PC and Mac – was all the concept that Fox Interactive had back in 1994. Fox sent this rather loose brief to several studios, and invited pitches. 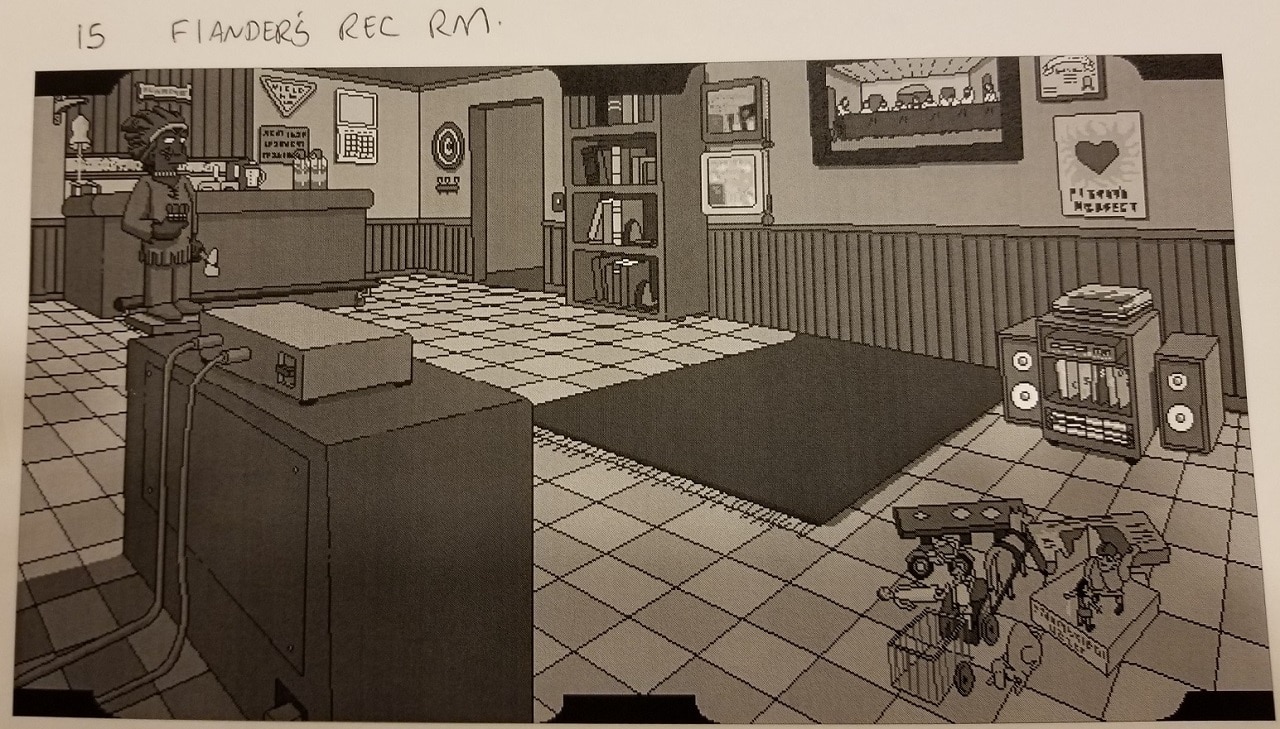 Michael Viner had just arrived at Vortex Media Arts (VMA), an LA-based production company with a heavy animation focus, and the closest he’d come to video game experience was project managing an interactive screensaver. But when VMA asked who would like to lead the Virtual Springfield pitch, he leapt at the chance.

“I looked at it as an opportunity,” Viner tells me. “I had truly been there just about two weeks, and was really dipping my foot into video games.”

“After a week, I turned in a game design document. It really wasn’t a pitch – I did the game design, and somebody else threw a budget on it – and Fox very quickly said yes… it was only a matter of weeks before we were told to get started.”

In that week, Viner drew up a remarkably thorough vision of what the game would come to resemble some two and a half years later. An uncharitable sort might suggest that Viner’s lack of video game experience shows through in the final product, and that the largely-passive position of the player in Virtual Springfield has shades of the interactive screensaver he’d previously worked on. 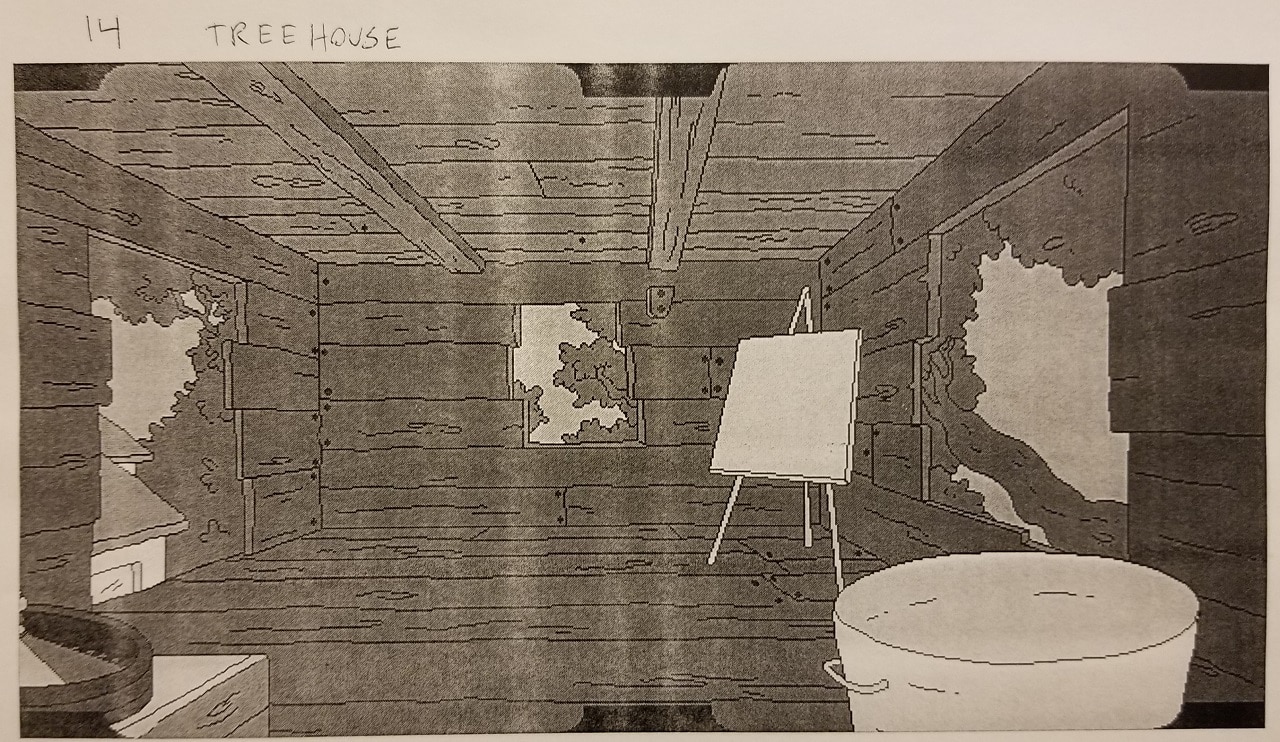 But Virtual Springfield was just what the name suggested, and that was enough. Being a fly on the wall in Moe’s Tavern, playing games in Noiseland Arcade, even prying behind closed doors at 742 Evergreen Terrace – all of which were chock-full of well-observed references, and with the famous voice actors enlisted to record fresh lines – was a thrill that no other spin-off game had even come close to.

Viner recalls that many reviewers at the time assumed that collecting all the character cards dotted around Virtual Springfield – styled after baseball cards – was “the point of the game.” The cards were in fact a relatively late addition, but the reality was harder to grasp: there is no ‘point’ to Virtual Springfield beyond experiencing it.

So with little for the player to do except clicking around much-loved environments and listening to Springfield’s residents go about their lives, it was imperative that the writing was good. And again, much of this was down to Viner. Small details that featured in the final game, down to specific lines of dialogue or the humorously-named magazines adorning the racks at the Kwik-E-Mart, were included in his initial design brief.

How the game looked was also of paramount importance, even if modern eyes might find the resolution lacking. The animation process was rigorous and demanding – both technologically and in terms of workload – and one of the main reasons the game took so long to complete. 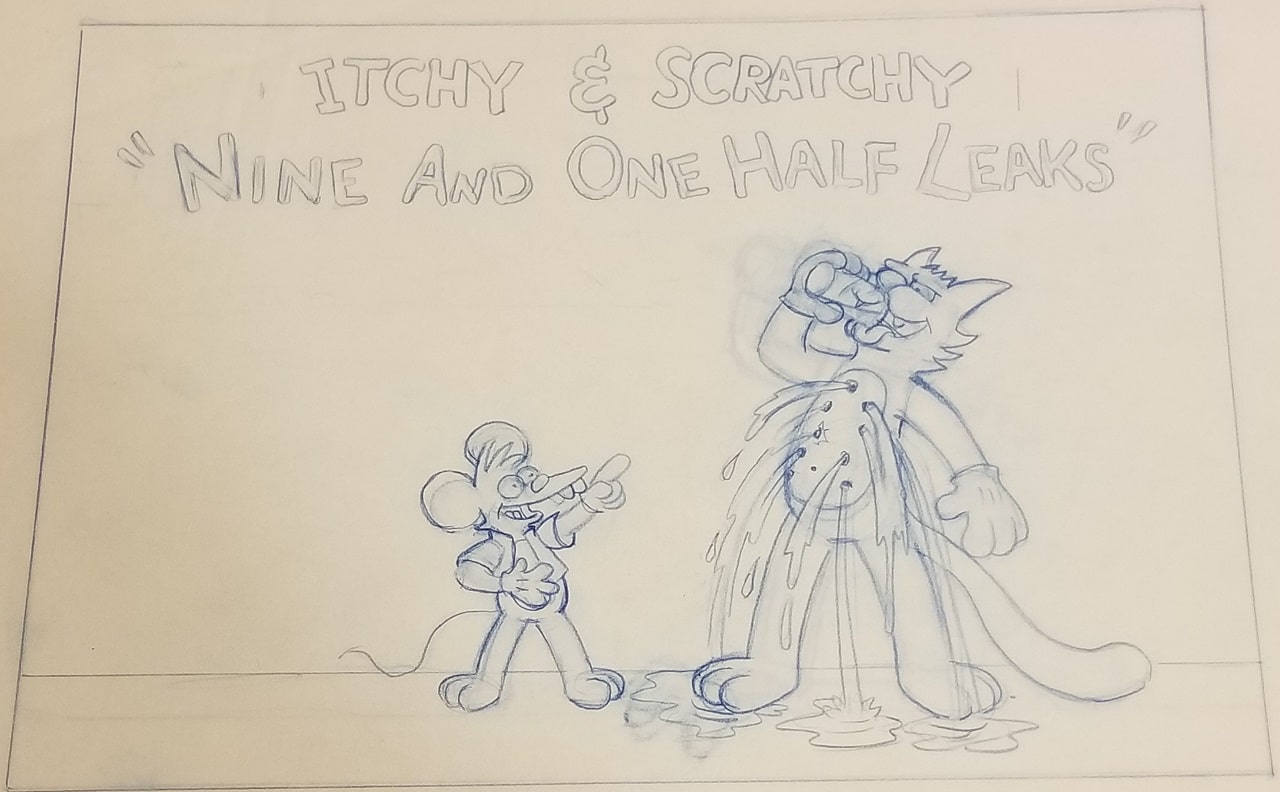 Viner says that television quality was always the ambition, even if it simply wasn’t possible. The Simpsons ran at 24 frames-per-second on TV. “We knew we’d be able to do a third of that, so eight frames per second.” VMA worked with a South Korean animation studio that also worked on the TV show, receiving “giant boxes” of animation before scanning them frame-by-frame, using a standard-definition camera, to capture a digital image that could then be re-outlined with digital ink and paint.

The conceit of Virtual Springfield is that the player is strapped into some kind of virtual reality headset, as shown through the opening cutscene. It’s a neat touch, both stylistically and thematically, and it contextualizes the occasionally voyeuristic feel of observing this world as an outsider. The real motivation for this framing device, however, was the frame itself: the bordered interface of the so-called “Really Virtual Viewthingy” allowed for a narrower display, a lower resolution, and quicker processing.

All told, the game featured 44,000 frames of original animation. Then there was the 3D work required to bring Springfield to life as a virtual space, with several modelers brought in to build Springfield – from generic houses to the interactive environments. This also entailed mapping Springfield from what was at the time only six seasons of reference material, which demanded close scrutiny of already-aired episodes on VHS tapes and the specially-provided scripts of those yet to go out.

VMA was a somewhat oddly-structured company, employing some 30 animators. “We had all these animators – full-time, on staff, not contractors,” Viner explains. “It was the bulk of the company. We only had three programmers, a few project managers, and then all artists.” 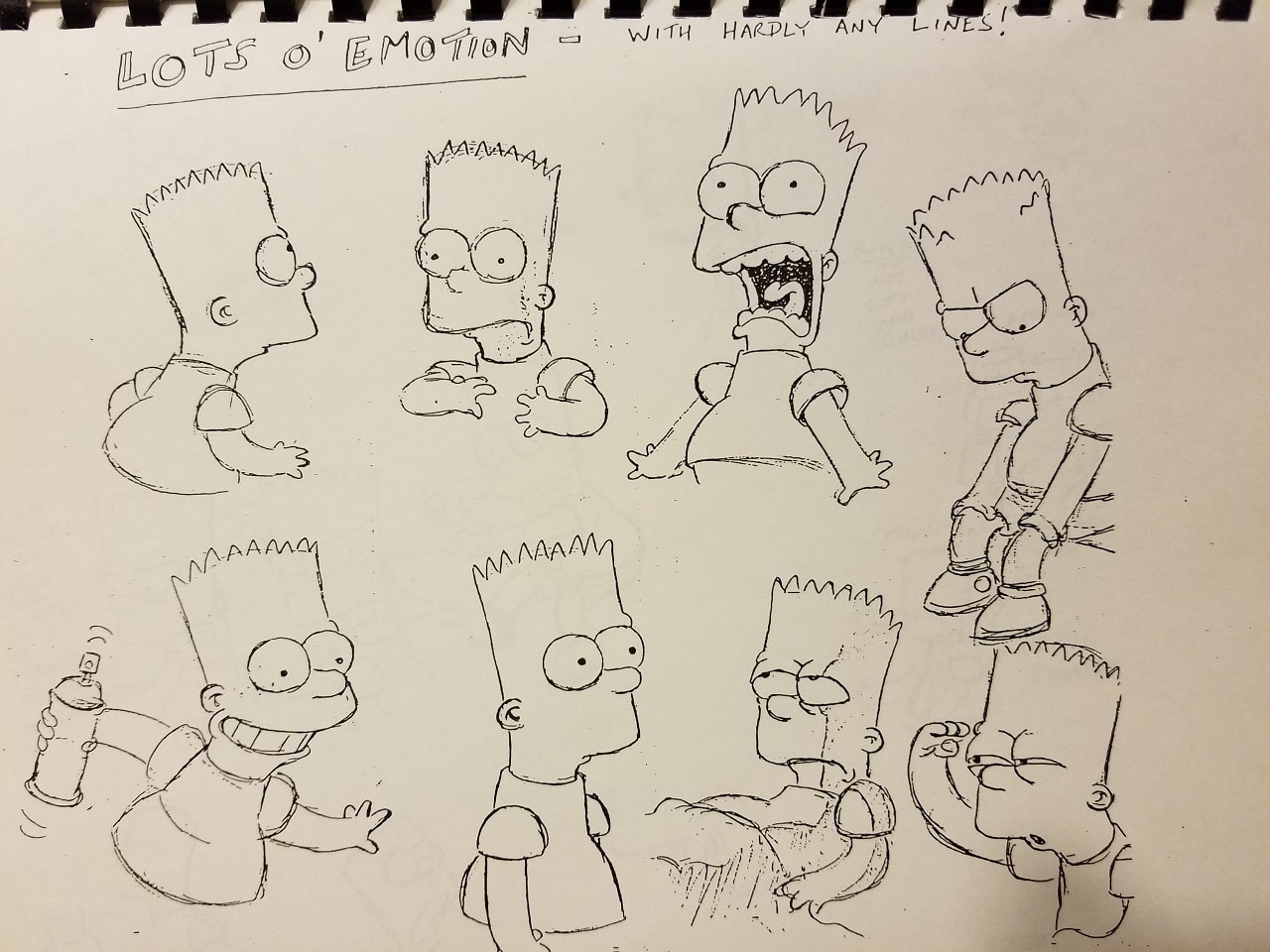 “It became difficult, especially working milestone-to-milestone for Fox Interactive, to cover pay checks,” says Viner. “We had to, as time went by, whittle down the staff.” When a milestone was hit and more funds became available, employees were often hired back. But it proved unsustainable, and VMA went bankrupt after two years of Virtual Springfield development.

But with the bulk of the work now completed and attention turning to bug-fixing and getting the game ready to ship, only a skeleton crew of four were brought along to Digital Evolution. These were Michael Viner, digital artists Andy Wilson and Roger Hardy, and programmer Morgan Roarty. Viner has particular praise for Roarty, who had taken a job at EA in San Francisco after the fall of VMA, and yet continued to give up his weekends to ensure Virtual Springfield was finished.

“Every Friday I would drive to Burbank airport, he would fly in on Southwest Airlines – much to the dismay of his family, I’m sure,” remembers Viner. “He’d sleep on my couch, come to work on Saturday, and on Sunday he’d fly back to San Francisco. He said he was going to do this for a couple of weeks; it ended up being two months.” 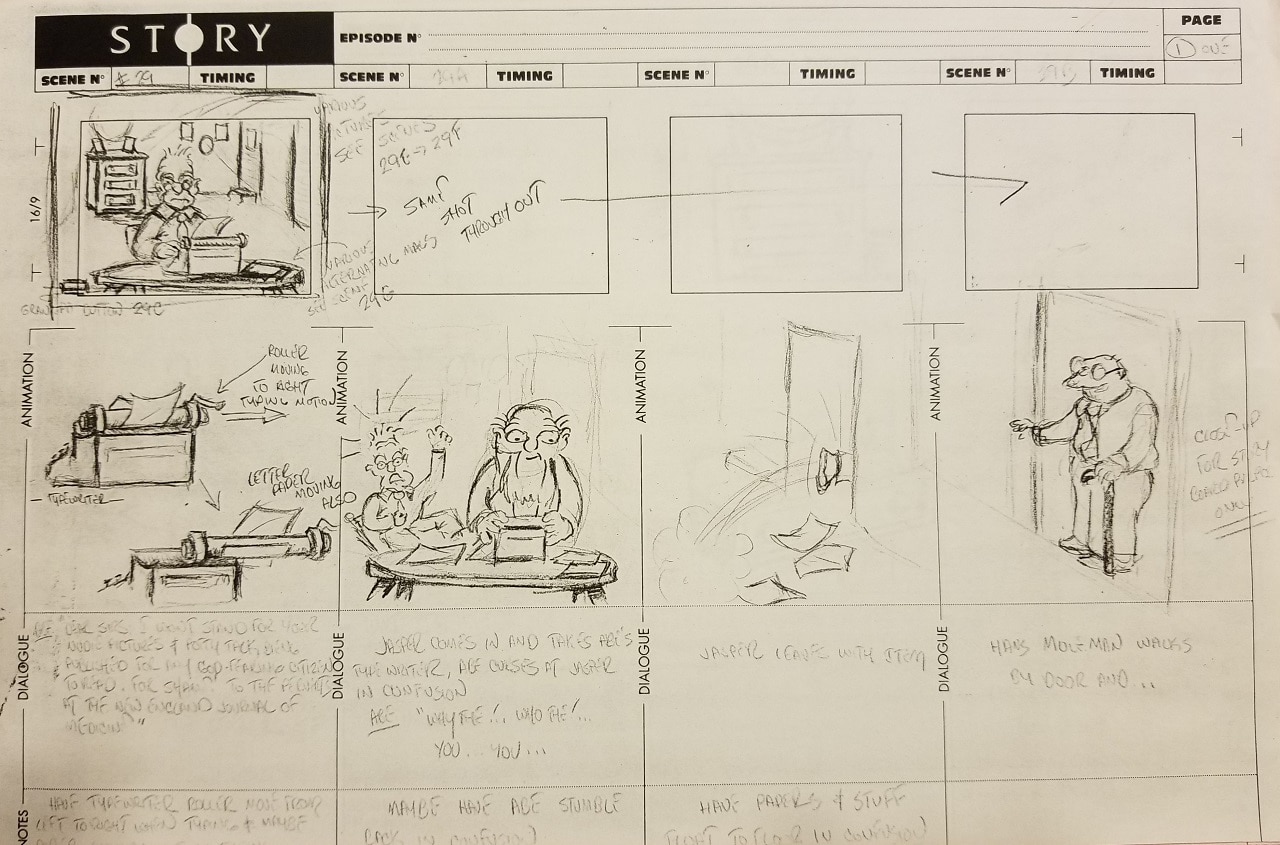 It was a huge display of commitment from Roarty and the remaining team, especially as Digital Evolution had hardly rolled out the red carpet for them. They were annexed away from the firm’s other 150 employees in the office kitchen. “I don’t think most people even knew what we were doing in there,” laughs Viner.

But they got it done, and Virtual Springfield came out to a mixed response. Some publications assumed that The Simpsons writing team were directly involved, which Viner “took as a great compliment.” The New York Times recommended it, while Entertainment Weekly named it the second best game of 1997 – just behind Riven, and two ahead of Goldeneye.

“We kind of laughed, and knew that we weren’t as good as that game, but it was nice to be noticed,” says Viner. Taking a directly opposing view was People Magazine, which ranked Virtual Springfield among the worst 10 games of the year. “They called it a mess,” adds Viner. “Just another empty Simpsons game.”

That is unfair, even if Virtual Springfield is a divisive experience. In modern parlance it might even be dubbed a ‘walking simulator’, but at the time the question was whether it was a game at all. With hindsight, it’s easier to see that of all The Simpsons games, this is one of the few that captures some essence of the show. Bart Simpson’s Escape from Camp Deadly was unquestionably a video game, but it had nothing to do with The Simpsons beyond the spritework.

“I don’t think anyone who was a gamer thought it was an amazing game,” concludes Viner. “More a good Simpsons product.”