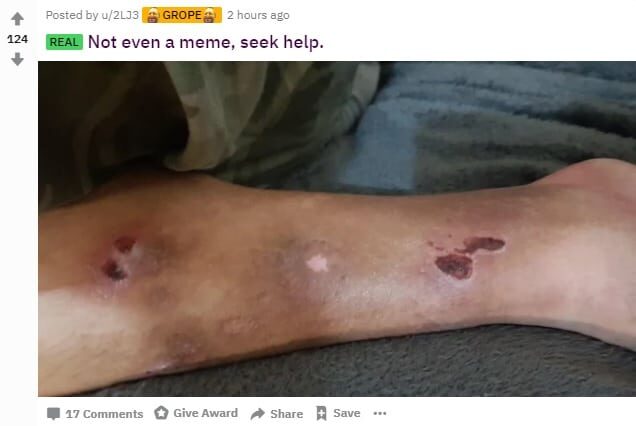 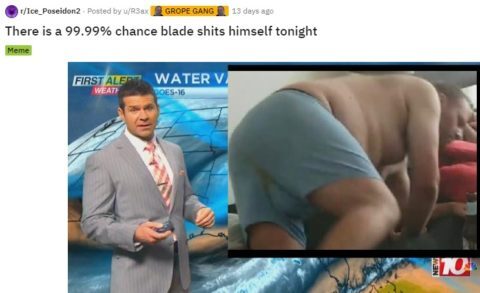 Friends and fellow youtubers — even Keemstar — have repeatedly tried to get him help, but Brian ‘Blade’ Risso, the semi-famous Call of Duty youtuber who now resorts to livestreams for drink donations, refuses any kind of treatment that might take him away from his daily routine of getting black out drunk to the point of urinating and defecating on himself.

The lifestyle, combined with his diabetes, has exacted a terrible and grotesque toll on his now partially rotting body. People on Reddit are daily speculating on his imminent demise, with some only giving him months to live.

Users of r/Ice_Poseidon2, a subreddit dedicated to laughing at IRL livestreamers, are closely monitoring his rotting legs in particular — and cheering on every development even as they realize it can only end in amputation or death. 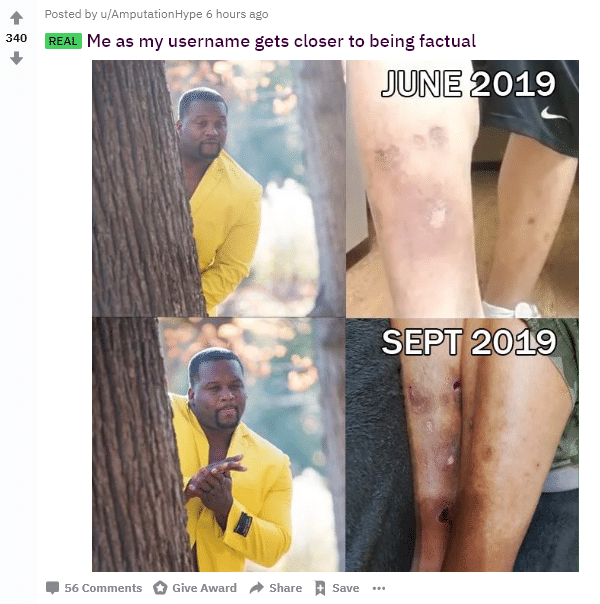 The subreddit views Blade’s leg holes as entertaining livestream characters in their own right, and have created hundreds of memes for them. They are even the subject of a catchy music track that has garnered tens of thousands of listens on youtube alone. 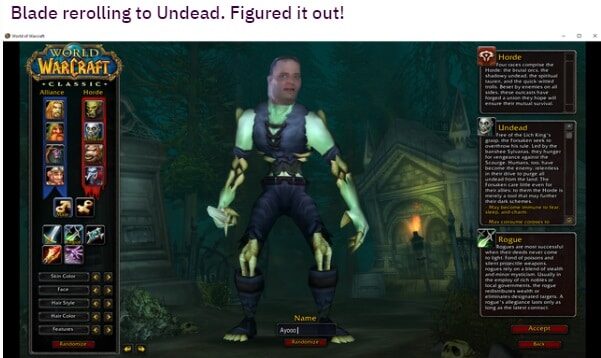 Now they believe Blade’s legs are on the home stretch before the inevitable amputation. 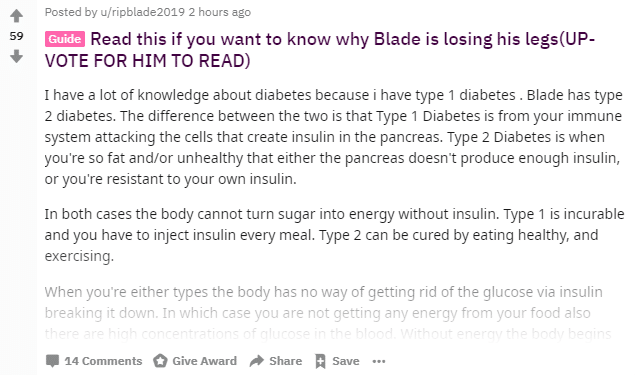 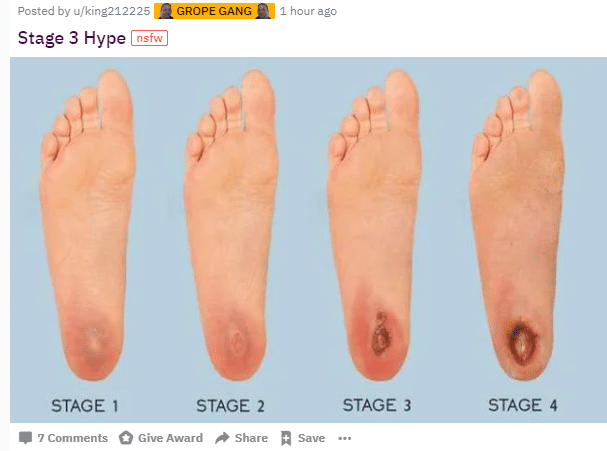 Daily livestreams reveal his legs (as well as his lower waist) are starting to take on a brownish purple hue, and his leg holes are rapidly growing bigger and deeper.

Viewers thought it was about to get to the Dial 911 stage last night, as Blade’s idiot savant friend from Denmark livestreamed a barely alive Blade wobbling around on a bed and making unearthly obesity noises. His legs and leg holes were clearly worse than ever before, and Bjorn made some attempts to consult an internet doctor about the situation. 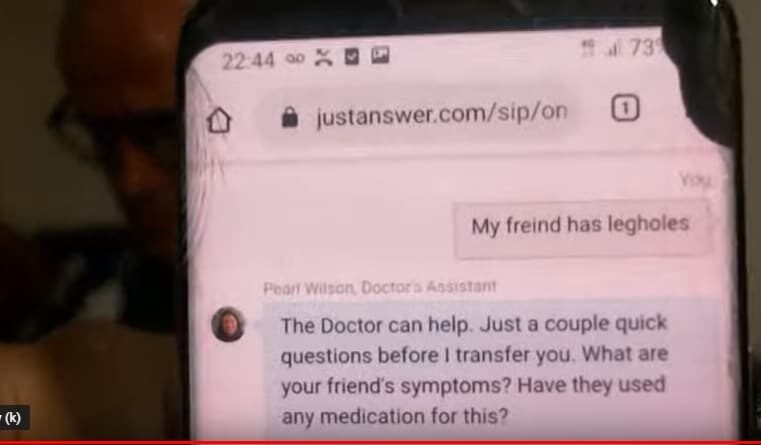 It should be noted that not all r/Ice_Poseidon2 users are seeing the journey to amputation as good entertainment. Many are still urging Blade to seek help in futile posts that will go unseen (he is only conscious a few hours a day) or get shot down by one of Blade’s many clever catchphrases, such as “scram, bitch” and “you’re poor, bitch.” 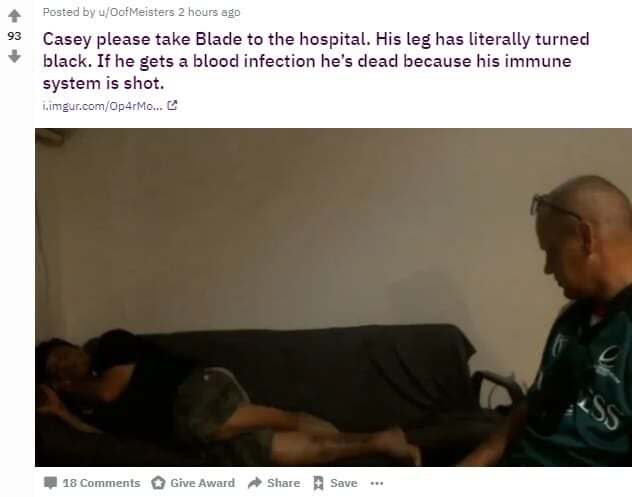 IRL livestreaming keeps getting ever more degenerate as has-beens, gold diggers, and homeless people compete for viewer donations in debauchery and crime filled retard sprees pioneered by Ice Poseidon. Ice Poseidon was an LGBT livestreamer who got his start as a Florida-based Runescape troll and eventually earned upwards of thousands of dollars a day livestreaming the dregs of LA society.

figure it out dude

FIGURE IT OUT LIL BRUISES

FIGURE IT OUT LIL BRUISES!

New update from the top leg hole official, Blade himself, shows that the situation is once again WORSE THAN EVER. 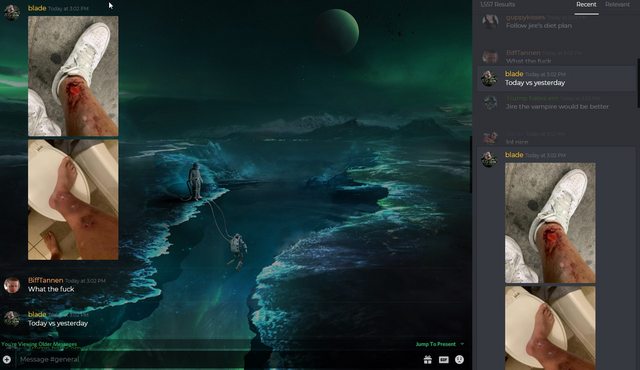 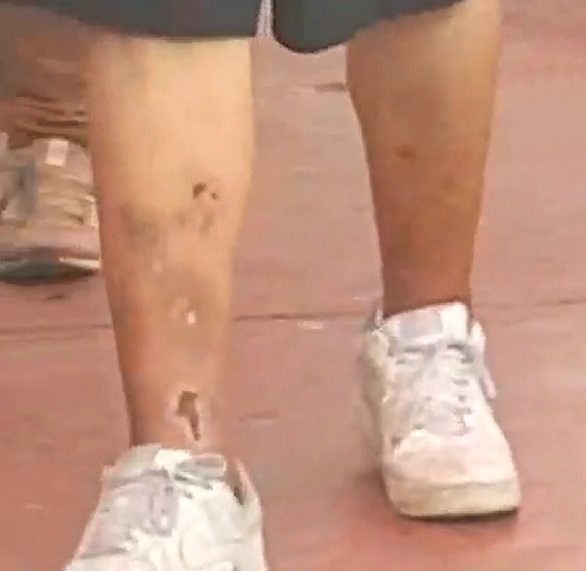 He must have a death wish because ignoring diabetes will kill you. There are over 100 million pre-diabetics in the United States . Of which 90% will develop full blown diabetes because they ignore it. I just watched him stream and he was eating mexican food and drinking beer and vodka shots so he must want to die.

Blade doesn’t care. Why should we?

Hello, I am moderator for Gary. ONLYUSEmeBLADE go ahead and toss me moderator when you get a chance. Thanks. 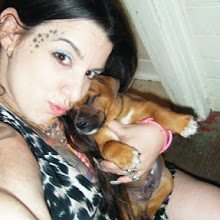 Brian “Blade” Risso, a man barely alive. Gentlemen, we can rebuild him. We have the technology. We have the capability to build the world’s first bionic man. Brian “Blade” Russo will be that man. Better than he was before. Better, stronger, faster.
-Mr Big

[…] There are endless examples of online influencers deceiving their fans, and even those who aren’t even capable of taking basic care of themselves. […]

Type 2 diabetics have vascular perfusion issues and something called neuropathy where their peripheral limbs lose sensation due to blood flow problems. Sores/ulcers develop, and diabetics have slower wound healing so they will likely get progressively worse if not treated.

If he stopped drinking and saw a doctor to start an insulin regimen, he’d probably recover from this pretty quickly.

But he won’t, and diabetes has a way of catching up to you. When you start to have pathogens detected in your blood your body releases more glucose to fuel all the white blood cell activity, and your immune system doesn’t stop to check your blood sugar before it asks for more glucose, so your sugar gets even higher exacerbating the problem. Eventually he’s going to start having to piss every 30 minutes, and when it’s time to get up he’ll realize he can’t stand, this is diabetic ketoacidosis. He’ll have to go to the ER for it to get his blood sugar and fluids under control, and there they will notice his legs, and admit him.

poor bitches go on a diet, people who have figured it out drink the lard limbs away

You don’t need legs to livestream dude, figure it out 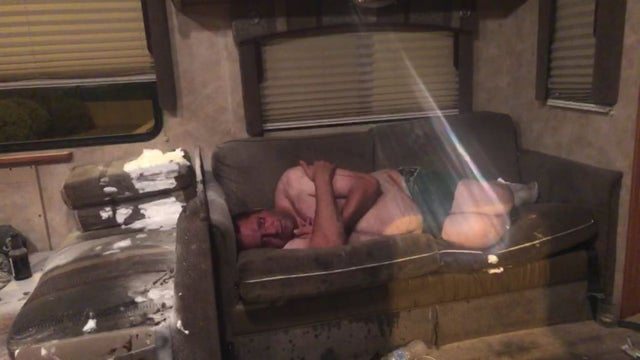 In reality I think blade knows in the back of his head that something is really wrong. But he’s playing it off with the memes and jokes.

I gave him mushrooms to cure his alcoholism. Not sure why it didn’t work lol

I only donate to him to watch his demise

Leg holes are the new thing.Just watch. This winter all the trend setters will have em.

Karma for being a racist sex offender! gently caress THIS GUY.

Skaaal for the new king yahoooo!!!!

I tried to help Blade by giving him mushrooms and exploiting him fo views last year. I am the only one who helped him. All I do is hide in my room. I only come out when fiends need me. it did not work. Gave up and moved not my real passion. Being featured on Chris hansen was my idea. Wish blade would have listened to me and came on my rv trip. After all i have done for him and all. figure it out. strawbery vision is sexy. ayoo

I think his legs are sexy. Article is bias and jealous. This streamer is living the American dream and you sjw’s are trying to bring him down. Leg holes are not even that big of a deal. He owns a Caddy with a wicked sound system. Figure it out AYOOOOO

GET THIS TO BLADE ASAP