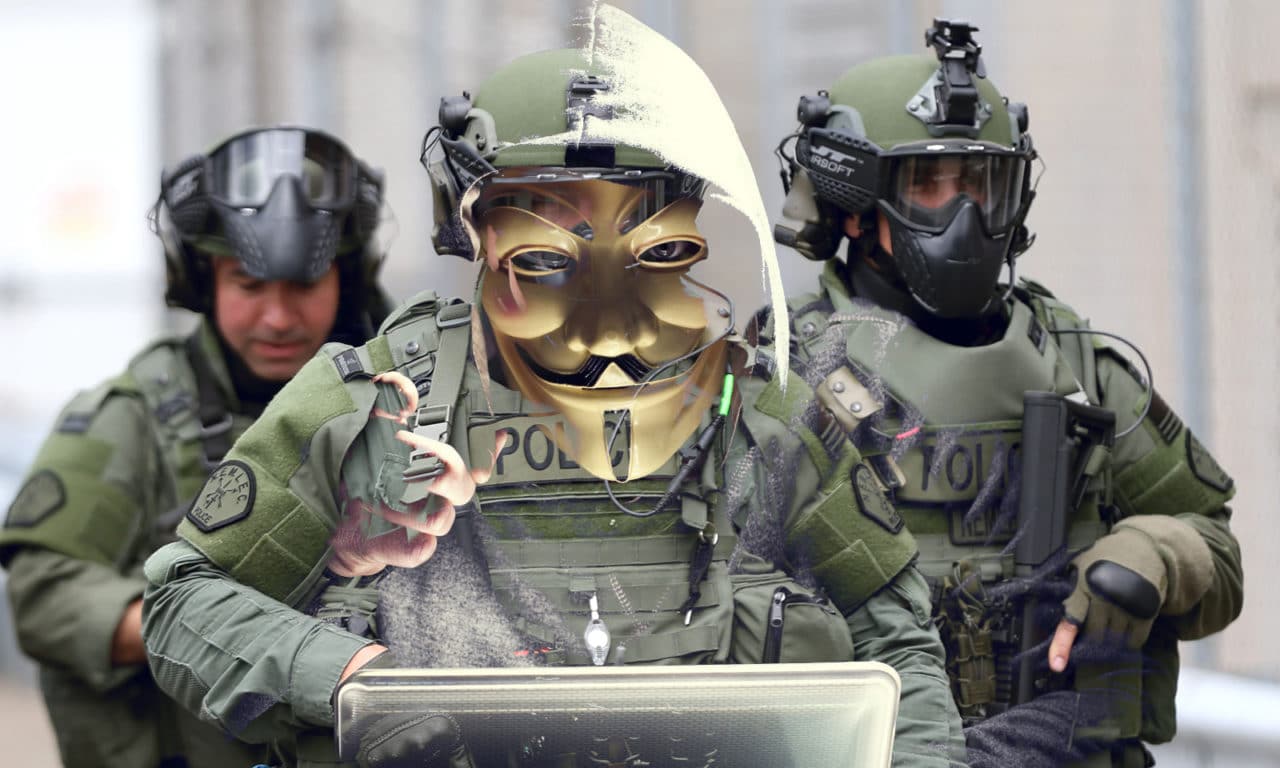 An online match of the popular online video game, Call of Duty: WWII, has escalated into real-world violence when one player allegedly prank called the police to SWAT his teammate over an argument over a $1.50 video game wager.

Police in Wichita, Kansas say that a tragic shooting on Thursday may have been the result of a “swatting,” which is the practice of getting a SWAT team to descend on a person’s home by falsely reporting a hostage situation.

Speaking to the press, Wichita Deputy Police Chief Troy Livingston said that officers responded to a 911 call that a father had been shot in the head, and that a shooter was holding his mother, brother, and sister hostage.

When police arrived at the address, Livingston said that the 28-year-old man who opened the front door was shot and killed. Livingston told the press that the man moved one of his hands toward his waistband, prompting an officer to fire a single shot because he feared the man was reaching for a gun. Finch was declared dead a few minutes later at the hospital.

The victim was not identified by the police, but the victim’s mother, Lisa Finch, identified her son, Andrew, as the victim. She says he was unarmed and not a gamer. Speaking to the Kansas City Star, Finch said that was “murdered” by the police, stating that he went to the door after hearing something. He screamed, and was shot.

The tragic sequence of events unfolded over an argument over a $1.50 wager in a Call of Duty game on UMG Gaming, which allows players to partake in money matches in various competitive video games.

Two Call of Duty: WWII players who were on the same team reportedly got into a heated argument, blaming each other for losing the wager. It escalated into threats of swatting. One of the players reached out to a “known swatter” to make good on his threat, who then contacted the would-be victim.  The would-be victim challenged the alleged swatter, and reportedly provided him with a fake address. The alleged swatter then called the SWAT team down on Andrew Finch.

The swatter is believed to be the same individual responsible for forcing the evacuation of the Call of Duty World League on December 8 when he called in a hoax bomb threat.

As events unfolded, news of the swatting got around in the competitive Call of Duty community. DANGEROUS cannot provide a link to the dox out of respect for the victim and his family.

Daniel “Keemstar” Keem of the DramaAlert YouTube channel investigated the situation, and discovered the identities of the players responsible, as well as the swatter allegedly responsible for calling in the fake hostage situation, whom he interviewed. 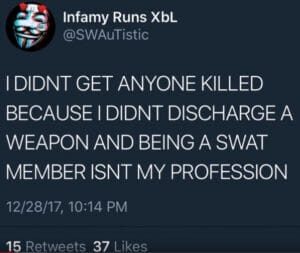 The alleged swatter admitted to calling in the fake hostage situation.

“I was minding my own business at the library, someone contacted me and said ‘hey dude this fucking retard just gave me his address and he thinks nothing’s going to happen. You wanna prove him wrong?’ And I said sure I love swatting kids who think that nothing’s gonna happen and then I followed the kid that he wanted me to SWAT, and the kid sent me a DM saying, he basically messaged me with an address.”

The alleged swatter refused to take responsibility for his role in Andrew Finch’s death, stating that “you could point the finger at numerous people,” blaming the police officers, the player who first contacted him, and even the would-be victim who provided him with the fake address.

“We woke this morning to horrible news about an innocent man losing his life,” said Shannon Gerritzen, a VP at UMG in an email to the Associated Press. “Our hearts go out to his loved ones. We are doing everything we can to assist the authorities in this matter.”

According to the AP, the FBI estimates that around 400 cases of swatting occur annually, some of which spoof caller ID to fool emergency responders.

9 thoughts on “<span class="entry-title-primary">Man DEAD after Call of Duty teammate swatted him over a $1.5 wager</span> <span class="entry-subtitle">The swatter is believed to also be responsible for forcing the evacuation of the Call of Duty World League on December 8 when he called in a hoax bomb threat.</span>”