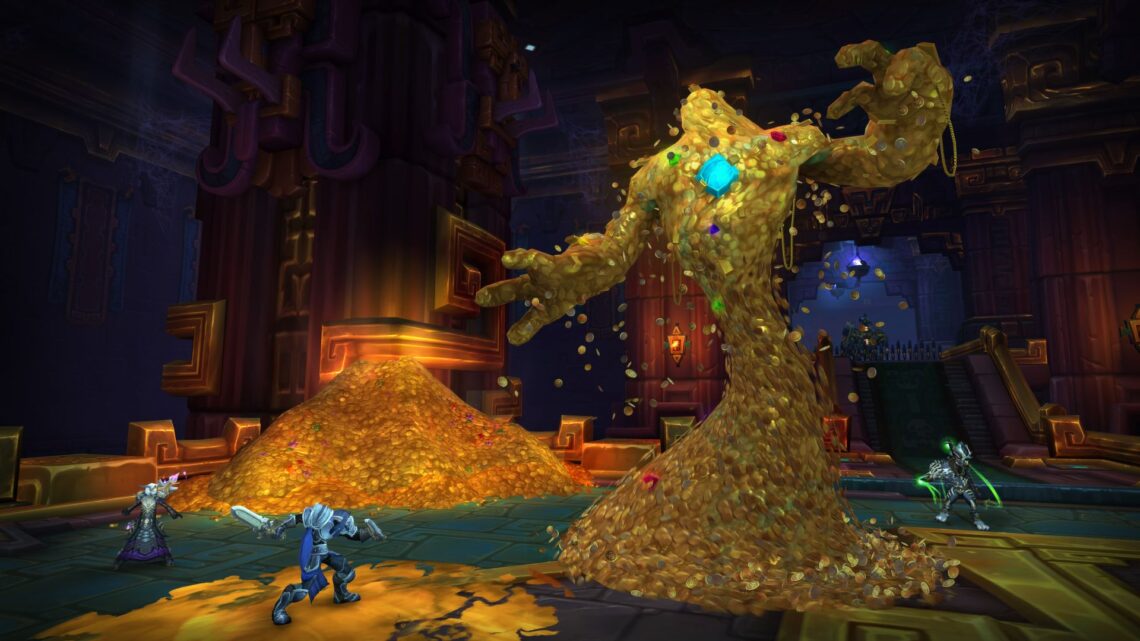 We’ve heard disturbing rumours. Apparently the dispensers in the toilet cubicles deep within the bowels of Blizzard Entertainment’s development studio contain not puppy-soft rolls of gooch-caressing papers as one might expect. Instead they’re stacked with $100 bills, each capable of removing three grams of klingon from an individual’s buttocks, leaving it hassle free for the long hours spent at computer desks, watching coin flow into the company’s bank balance.

Indeed, with World of Warcraft, Blizzard Entertainment stumbled upon the perfect business model. Through the land of Azeroth they created an enchanting environment and then laced it with addictive and enjoyable gameplay to which a community could rally around. They then regularly updated the way you could approach and view the world, keeping the established user-base active while enticing evermore people into the experience. Critically, it meant that the developer never had to go back to zero one and build up a new experience from scratch. It never had to take that risk and incur that cost. And here we are – going on five years later – and the game continues to sell strongly, while maintaining a loyal core of subscription paying fans.

So genius in fact, that almost every other publisher has had a crack and getting their fingers in the pie. Most figured the best path to take was to create their own MMORPG, with a host of game announcements for the genre through 05, 06 and 07. But the few titles that actually made it to release – Star Wars Galaxies, Lord of the Rings Online, Age of Conan, Tabula Rasa, The Sims Online to name but a few – could never duplicate the massive successes of World of Warcraft. The market was owned already.

As such, you could almost read the minds of publishers across the globe: “the PC world is taken, so let’s take a crack at consoles”. So it was that a host of console-based MMORPG’s began to surface on release radars. Yet again this proved to be a dead-end, with the idea seemingly floored by technological impasses and a lack of genre affinity from the console crowd. Those that made it to store shelves bombed – Final Fantasy XI – but most just seemed to fizzle out of existence – Age of Conan.

So where to next?

Enter Rockstar. The developer has pulled the plumb from the pie and is set to gorge on its sweet juices with The Lost and Damned. The developer has found the sweet spot with their episodic DLC for GTA IV, blending the winning business model of World of Warcraft with a system that is supported and functional for console owners. We’ve played it, and it is set to change the face of console gaming forever. Let us explain…

With Liberty City – the New York inspired metropolis which is your game world in GTA IV – Rockstar built a contemporary, urban, console alternative to Azeroth. Diverse, rich with activity and massive, Liberty City is built to exist all on its own. You can imagine right now that the LCPD are patrolling the streets, pedestrians are hailing cabs, arguments are brewing on street corners and the weather has just begun to shift, a storm imminent. The intricate A.I ecosystem that powers the world is built to sustain itself.

What this allows Rockstar to then do is manipulate the way the player engages with that world. In the initial release of the game, we followed the journey of Niko through Liberty City and his rise from goon-for-hire to criminal powerhouse. In The Lost and Damned episode we will instead follow the journey of biker Johnny the Jew. Same world, but a different perspective. In the already announced second episode which is expected to be released towards the end of 2009, we’ll enjoy a third adventure through the streets of Liberty City and you could be anyone. Hell, you could be a cop, or an illegal street racer.

In effect, they’ve developed a platform… a console within a console… which can be interacted with in different ways. It’s a concept that has been gradually taking shape over the last year in multiple titles. The likes of LittleBigPlanet, Home, Rock Band and Singstar work to a similar business model, just on a far smaller and targeted scale.

But it is The Lost and Damned that is set to be the catalyst that popularises a method by which DLC can act in a similar fashion to a subscription to an MMO, delivering a meaningful and desirable remix to an existing framework that consumers will buy, without having to build and market a game from scratch. Something beyond a quest pack, or a new island, a genuine new game experience. You’re not buying an extension to the game world, you’re buying a new perspective on a world that already exists. And in the current economic crisis it makes even more sense to, in movie speak, use the same set again.

The way they’ve built it, Rockstar’s Liberty City has the legs to sustain gamer interest for many years to come. Why not do three, four, five episodes? Ultimately the graphics will begin to age, but the depth of the world and the quality of its production means that it could, feasibly, continue to remain an income stream right through to the end of this generation. For the sake of round numbers, even if only 10% of the 7 million owners of the Xbox 360 GTA IV game buy The Lost and Damned at 1600MPs (US$20), then that is US$14,000,000 dollars in the bank. And given the quality of the game, 10% could be quite conservative…

At what percentage does the relatively small cost of manipulating an existing world get covered and it all become profit? Not much, we’d think…

Obviously in the case of GTA IV, Microsoft has already paid US$50 million for the exclusive ownership of the DLC, but the business model still stands. Now all you need to do is build a world, a mythology and a gameplay experience that is enticing enough that consumers will happily come back to it again, and again, for more. No easy task, and you could argue that from the action/shooter point of view, Rockstar’s world is the only one currently up to the task, but with the success of The Lost and Damned developers can plan to this business model in advance.

Let’s look at some current examples. Take SKATE 2. What if EA looked to DLC which enabled the gamers to play as the camera man, tasked with following the pros around and taking the best shots. Or allows you to tackle the same world on a BMX? What if there was a survivor on Dead Space’s USG Ishimura on the other side of the ship, in a race against time to locate the boarding party before he/she is lost forever. What if you could try your luck as a gunrunner in Far Cry 2? Would these worlds hold-up under a different perspective?

Perhaps not: The Lost and Damned however will open the doors of this possibility to developers working on games right now. Could games like Halo: ODST, Final Fantasy XIII, Bioshock 2, Assassin’s Creed 2, Mass Effect 2, Prototype and Rogue Warrior be built in the belief that they can have sustainable multiple year lifecycles? Do we as gamers want this to be the way of the future? One thing is for sure, when The Lost and Damned brings in US$20 million in a couple of weeks without the developer needing to build anything substantial onto the world, publishers will take note.

Actually, this is a case of “reading too much into it”. It’s not Rockstar “discovering” Blizzard’s money-stream and only in it’s form is it maybe a new way of prolonging the life of games…but not in spirit.

Hell, this is what add-ons do in the end, prolong game sales. Warcraft 3, Hearts of Iron 2, EU3, EU: Rome all have add-ons that not only add stuff, but also mixes up stuff (which is actually also just adding in a different way).

You say DLC’s have been very mediocre to sucky, well, the same thing could have been said about add-ons. Most of them just “added” stuff, a few mixed stuff up (done by companies who care) and some where able to do this in the form of new games.

So this is just an add-on, not the same cookie-cutter stuff you expect from add-ons, but a proper one that not only adds but also mixes stuff up. In spirit, hell even in form (Paradox add-ons can only be downloaded these days) nothing new. It’s just an add-on where the makers put some genuine effort in and not just giving more of the same. The result is also the same: all the mentioned games gets prolonged life. Hell, even Nintendo’s Wii-makes can be seen as a different form of the same concept.

But the GTA4 add-on does do something not many add-ons have done gameplay-wise (there have been games who are built around the same premise though), in that it is new, but the whole structure and thinking behind it…naah.

It’s an expansion pack. Not exactly a new concept. They did it ten years ago for the original Grand Theft Auto on the PS1, among dozens and dozens of other games before and since. And there’s nothing about it that’s even remotely like a subscription-based MMO business model.

not sure if you read our hands-on, but this shares very little with the expansion pack concept we have seen over the last few decades.

This is not more quests, more missions, more guns and such, it is something completely different. You’ll get that when you get a chance to play it mate, but I really did try to impart that in the hands-on