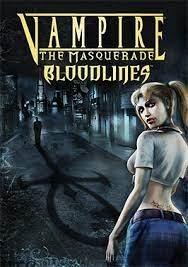 Somehow a failing, broke studio made the best RPG of all time

I don't even like vampire shit that much but goddamn, how did they make a game so good?