After the initial trailer was pummeled with YouTube dislikes harder than Ghostbusters, the new Call of Duty: Infinite Warfare commercial has almost made the game worth buying — for reasons other than the Cod 4 Remastered bundle.

The combination of witty social commentary and a star-studded cast (Michael Phelps, Dany McBride) has garnered praise where the actual game does not.

But as with everything providing a modicum of joy in this cruel world, someone got offended.

Namely Bob “Moviebob” Chipman, a notorious far left movie and video game culture critic with an unhealthy obsession with Mario, who once called the 90s console war his own personal Vietnam.

It's nice when CALL OF DUTY's creepy war-fetishism marketing drops from "offensively irresponsible" to "dumb and thus fun irresponsible." https://t.co/lEeacbTE3x

Moviebob hates Call of Duty because the game about war is too “pro-war” for a conscientious liberal like himself. He once even claimed the series contributed to the rise of right-wing nationalism among the gaming community.

And, according to the Super Mario fetishist, Call of Duty may in fact have ruined the world forever.

American culture had a chance, however slim, in the fallout of the Iraq/Afghanistan/Bush disasters, to FINALLY accept that…

…military worship, "peace through firepower," etc were hopelessly dated relics and cast them aside. CALL OF DUTY has likely ruined that. 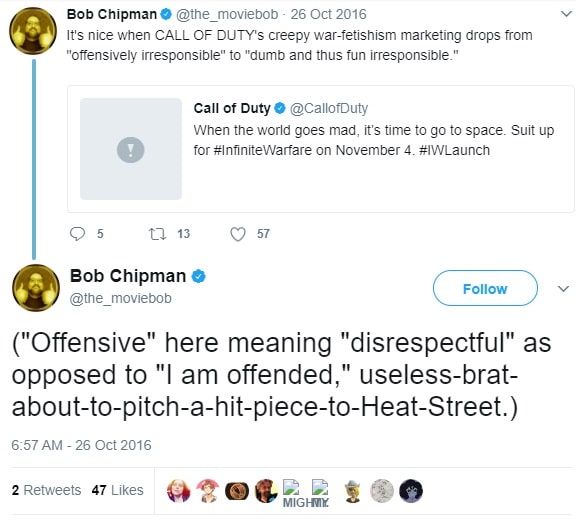 But we know he’s totally offended, so we’re running it anyways.

Appropriate: A bad guy (a neo-Nazi, in fact!) from a CAPTAIN AMERICA movies looks like a *good guy* from CALL OF DUTY pic.twitter.com/fv7tdhxDzf