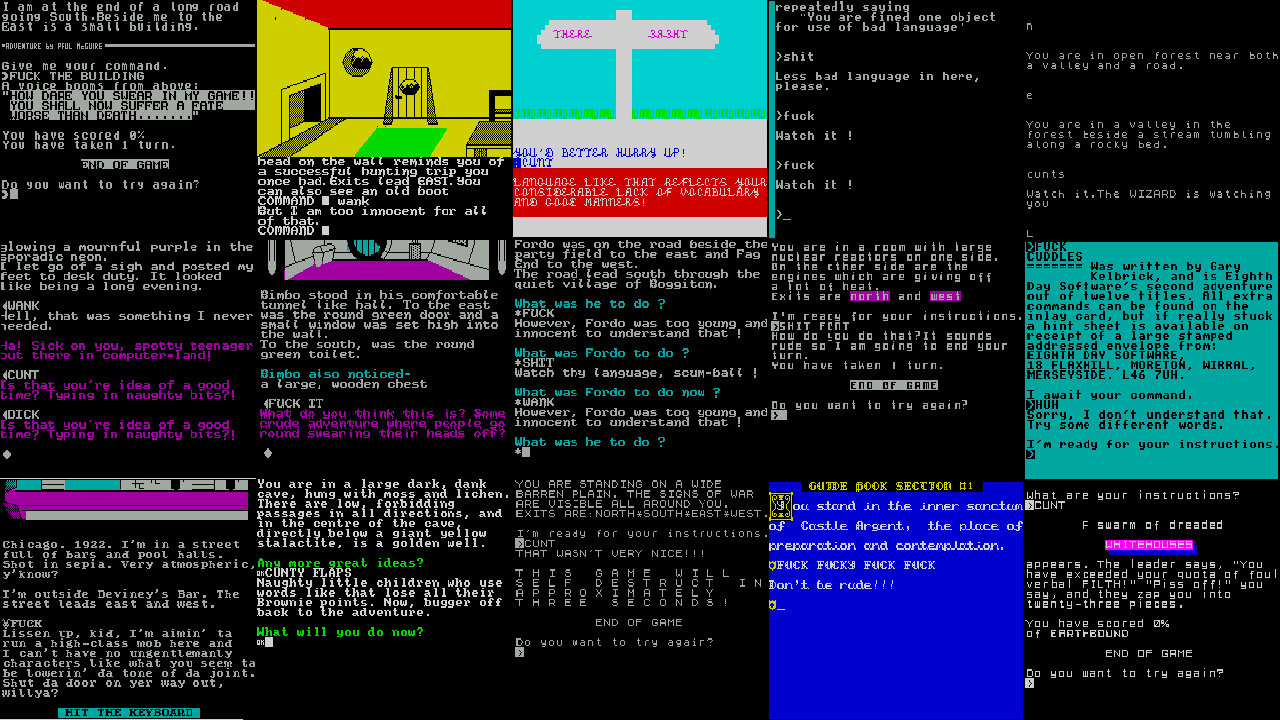 “Don't be ridiculous” the invisible narrator snapped, dismissing some long-forgotten typed request, and several decades later I still remember it.

It was the first computer game I'd ever played, an early 80s text adventure titled Madness and the Minotaur on my swanky new Dragon 32, and my uncle had joined dad and I to marvel at the shiny new toy and help us with the intricacies of English prose. He had to explain what it meant to be ridiculous. I'm being ridiculous? Even at a tender age I could sense some grand unfairness at work, even more so after the line started dumbly repeating itself, our textual flailings going unrecognized by a linguistically-challenged ghost in the machine. I'm being ridiculous, you barely-functioning piece of crap?

In an age of straight white lines masquerading as tennis rackets and insect-like invaders from space descending at a single frame per second, text adventures were where you went if you yearned for a story. Inspired by Dungeons & Dragons, as was much of the medium back then, the genre embellished its narratives by substituting written descriptions for RAM-devouring graphics.

You responded in kind by typing commands appropriate to your situation, like “Get Sword” or “Go North”, and were given a textual reply outlining the results of your action. That is, if the parser (the program inside the game handling all language-related tasks) could understand what you were asking -- which, aside from a few ubiquitous verbs, wasn't always the case. 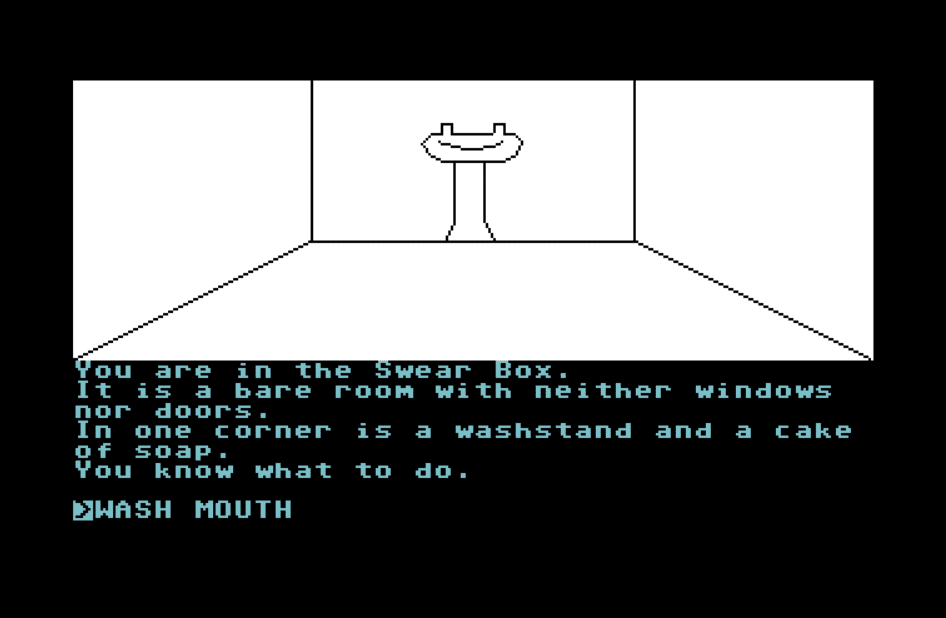 It's striking how much effort went into providing responses to verbal inputs that are quite removed from an adventurer's staple activities of bashing heads, climbing trees and examining stuff.  To be specific, these games tended to have responses to swearing. Trading insults with the player probably wasn't what Will Crowther had in mind when he inaugurated the genre with Colossal Cave Adventure, but the limitations made it almost inevitable.

The snarky antagonism that fueled my own childish anger might not have been a necessary feature of the genre but, when communication breakdowns are inevitable, there has to be something to fill the gaps.

The scene, in one variation or another, is familiar to anyone who's played one of these games. A cave hides untold riches and you're standing just outside. A nasty goblin, rusty dagger in hand, evil glint in its eye, is guarding the entrance.

“Hit Goblin with what?”

“You slash at the air ineffectively.”

Boredom and its hysterical sibling, frustration, led to many players impotently spouting obscenities at a digital narrator, who to be fair was unlikely to be hurt by the discourtesy. And with text adventures both feelings were familiar companions. In the earlier games especially, the parsers' powers of comprehension were extremely limited: even if you knew the solution to a puzzle, discovering the precise way in which it should be phrased could be an infuriating task. 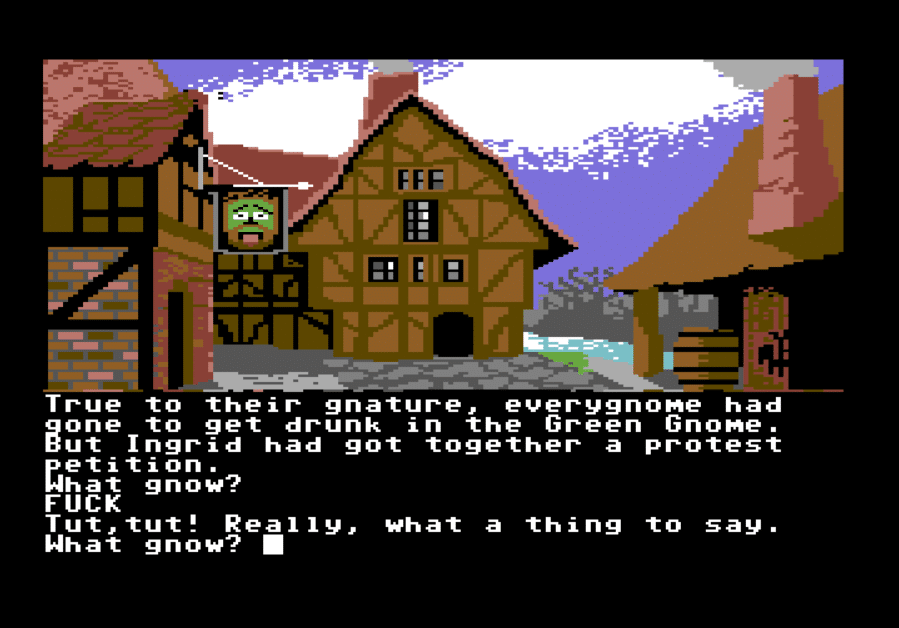 But there were other, more playful reasons behind textual vulgarity. A testing of boundaries, technical as well as social, is a fundamental impulse. What's the first thing you do when presented with a 3D game environment to explore? I push against half-open but unyielding doors or try to walk off sheer cliff drops in order to discover the world's edges — a momentary, deliberate fracture in our suspension of disbelief, that helps us preserve the illusion all the better in the hours to come.

With profanity and text adventures the urge is not dissimilar — when your world is made up of language, you discover its limits by stepping outside the borders of simplistic, practically-minded conversation. Typing “Arsehole” is the equivalent of trying to jump over a conHispanicuously low fence to see if you can reach the area beyond: the parser replying “That's uncalled for”, as it did in Infocom's Ballyhoo, was like an affirmation that you could.

The social aspect of such explorations is analogous — an attempt to find out what the game deems morally, rather than technically, permissible — but it comes with an extra perk. The barely-suppressed glee in Mrs. Doyle's most famous rant is instantly familiar to anyone who has typed the F word to see what kind of reaction they'd get, especially younger players whose language was constantly monitored by parents and teachers.

Zork, for these children, wasn't just a heroic adventure, it was also the perfect opportunity for some exhilarating verbal transgression. And since the tone of the response often echoed that of stifling authorities at home and in school, including classic scold “You ought to be ashamed of yourself”, the joy was all the greater in being free to ignore it.

Creators were quick to identify these tendencies, and more than happy to indulge players. Now being made in knowledge of the average person's merry rudeness, the genre responded with a glorious range of creative comebacks.

“Fuck” was obviously the word most often graced with a tailored retort, though some games recognized a wider variety of expletives. Developers that really put in an effort would provide different answers for different insults, and you could even learn a little bit about grammar.

Responding to “Fuck” Level 9's Lancelot reminds you that “Such words ill befit a person of chivalry and noble birth.” However, if your obscenity of choice is “Shit”, it oddly interprets your exclamation as a verb and cautions you that “Such dreadful actions in public are not worthy of a knight.”

Schoolmarm displays of disapproval were the most common method of dealing with offenders, the censure typically framed as part of the gameworld itself. The protagonist of The Big Sleaze protests that “I might have been a PI, but that didn't mean I'd flash my weapon around at the drop of a hint”, while your underworld boss in CRL's Bugsy goes on a long tirade about the respectable type of establishment he's trying to run — which you could read as a metaphor for the genre itself, the 'highbrow' alternative to the crude shooters and platformers of the day.

Other games, however, would appeal to a higher authority beyond their digital confines: that could mean your mum (“What would your mother think!” — Mindshadow ) or, rather unexpectedly, Mary 'Ban this Filth!'

Whitehouse. Rico Monkeon's Profanity Adventures has been cataloguing outraged replies on the Spectrum and has so far found three titles mentioning Whitehouse, and I can add Knight Orc on the Commodore 64 to the tally. 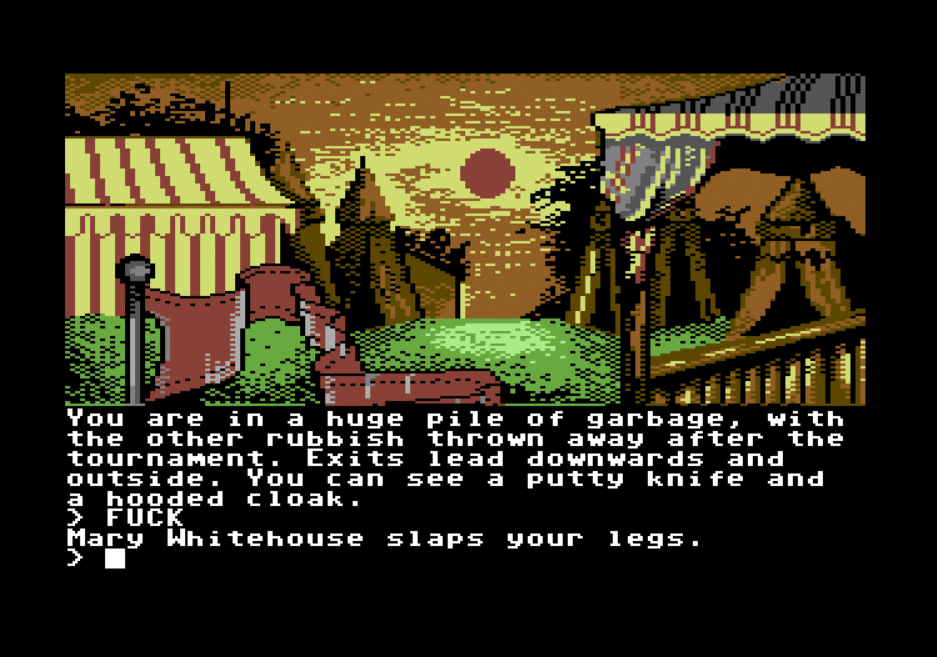 Nevertheless, mild and jocular discouragement was far from the only type of response swearing at the screen would generate. Sometimes text adventures would push back. Tolkien parody Bored of the Rings warns you to “Watch thy language scum-ball!” while The Witness, rather uncharacteristically for the genteel Infocom bunch, has a few choice words for your grandmother.

Elsewhere, your rudeness would be met by threats, and, occasionally, these would be followed through with real-world consequences. Asylum featured a three-strikes system: if you insisted on your vulgar ways it would eventually reset your game, almost as if driven by genuine moral indignation. Tau Ceti wasn't nearly as forgiving, acting on your first misdemeanor, flashing its own insults back at you and — this bit is brilliant — sadistically counting down the seconds before crashing. In the days of ten-minute cassette reloads, that was more effective a deterrent than anything your parents or Mary Whitehouse could come up with. 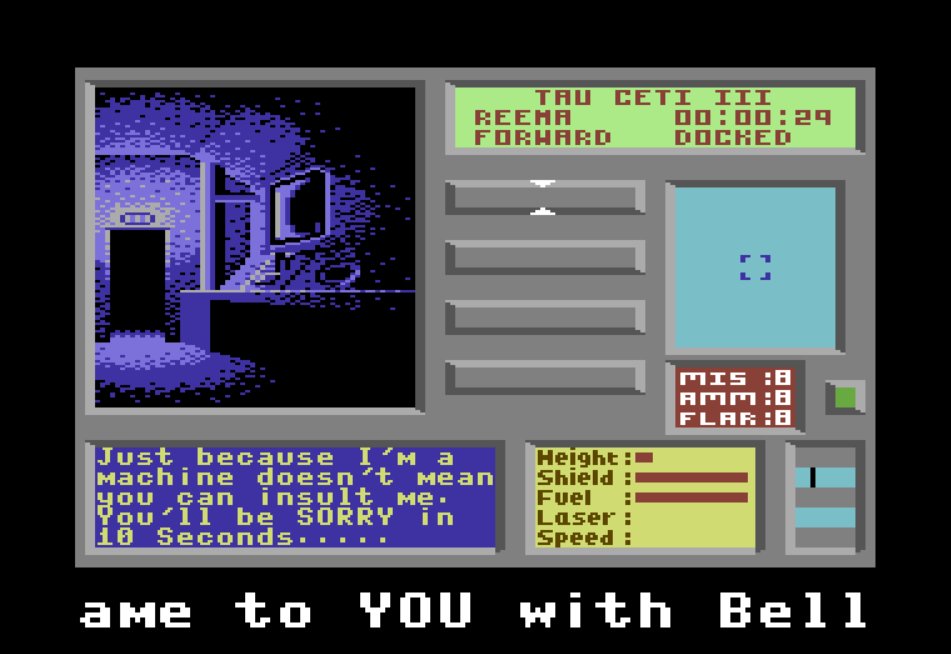 Beyond the admonishments and threats, beyond appeals to your better nature and session-ruining retaliation, there was a final, exceptionally rare type of reaction. One that seemed to retain the punitive character of traditional responses, but belied a more ambivalent attitude toward player profanity, one that recognized and even rewarded the more positive, adventurous elements in it. The Very Big Cave Adventure would teleport you inside the Swear Box, an otherwise inaccessible room whose (admittedly rather obvious) puzzle would require you to wash your mouth with soap before allowing you to resume from your previous location. The Quest for the Golden Eggcup employed an identical gimmick, imprisoning you in something called God's Dungeon — though I was unable to find the trapdoor that purportedly takes you back to the game proper. Effectively these are secret levels, additional game content available only by swearing at the machine.

The heyday of the genre, that indecipherable moment in time when a future US Poet Laureate could be persuaded to work on a text adventure, is far behind us now — Robert Pinsky was actually quite enthusiastic about writing Synapse Software's experimental Mindwheel though, sadly, the game gives zero fucks about swearing. With technology relentlessly advancing, the narrative baton was passed first to the visually enhanced environments and streamlined menus of point 'n' click adventures, then, inevitably, to first- and third- person action games. 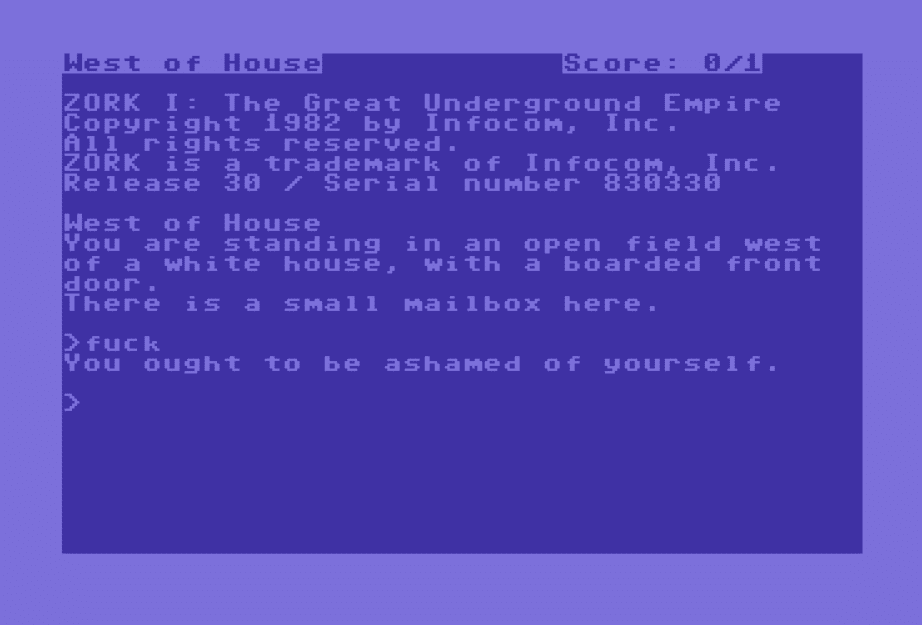 Interactive fiction, as it is now universally called, still caters for and absorbs a dedicated niche audience, and those days of verbal abuse left their own subtle mark on the industry as well as ourselves. Kotaku's Matt Wales says he only knows the word 'uncouth' because that's what the Gremlins text adventure game would call him when he swore at it.

And to be brutal about it, we live in an age where blue language is more frequently seen than ever before, and so the taboo is a little less but so is the shock factor. The sense of adventure, danger even, that came with typing in those early “shits” and “fucks”, the delightful uncertainty of pushing at the boundaries and not knowing how they would push back, is lost. It's a sad state of affairs, almost enough to make me want to mutter expletives under my breath. But I won't. After all, what would my mother think?