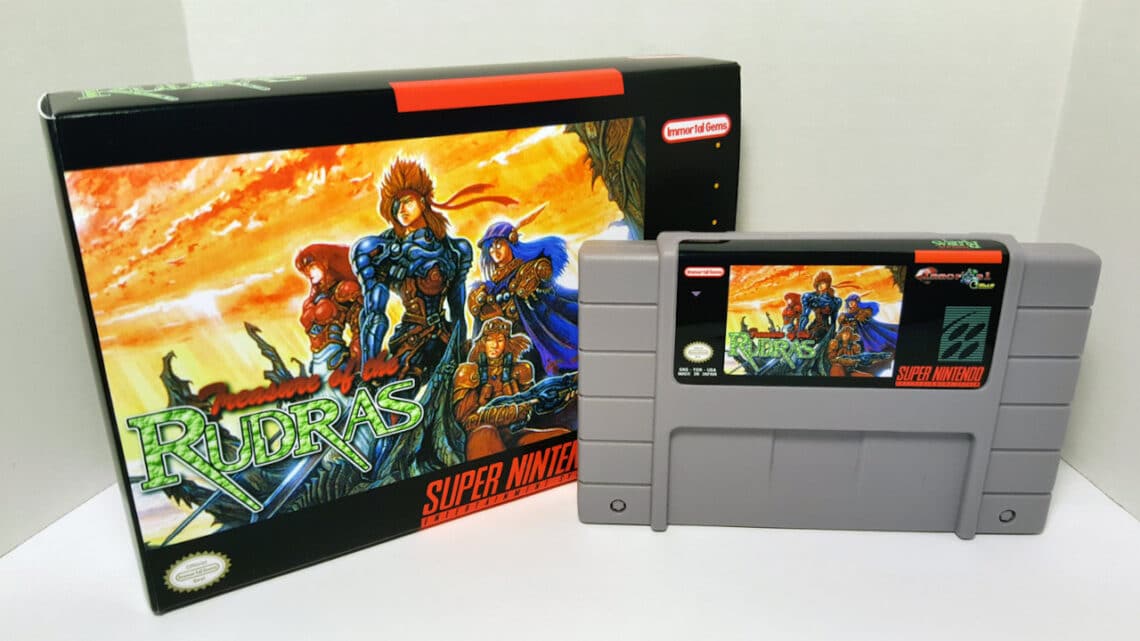 The SNES was the home to a lot of classic Japanese RPGs, back when prolific developer Square was at its prime. Square was responsible for Final Fantasy VI, Chrono Trigger, Actraiser and many other RPGs that have since become classics. Sooner or later we saw a lot of them make it overseas, but some were just released too late in the SNES’ lifecycle to make the localization investment viable. Enter Treasure of the Rudras, Square’s final game for the SNES.

Released in 1996, Treasure of the Rudras is a traditional Japanese RPG with an interest in Indian mythology, focusing around the last 15 days before the world is destroyed and built again by a ‘Rudra’ – which, in Indian mythology, is interchangeable for Shiva or the Maruts, a group of storm deities. The setup is unusual and refreshing in comparison to the standard, generic, amnesiac-young-hero JRPG mythos, which usually takes most of its inspiration from Western mythology. This is a doomsday scenario with storytelling that was way ahead of its time.

When you boot up the game, you’re given the option to select one of three characters, each with their own unique story campaign, at Day 0 of 15. Treasure of the Rudras is structured in such a way that actions in one playthrough will affect another, in addition to characters from other campaigns crossing paths with you. These methods of storytelling and story mechanics are absolutely unprecedented for a game developed in 1996. There are options to switch what campaign you’re playing on the fly, much like HBO’s Game of Thrones, with its ever-changing mise en scène. There’s a hidden fourth campaign, which is only unlocked by completing the former three and joins together the cast for a flashy, memorable final showdown.

The world of Treasure of the Rudras has similarities to other JRPGs of its time, skirting the classic fantasy aesthetic and instead cutting in elements of science-fiction, much like the more modern Final Fantasy titles. The game also lifts from biblical inspirations, featuring two ruined cities called Sodom and Gomorrah. Inside the game we see the first little seeds of the blend of science-fiction and fantasy that was perfected in the world of Final Fantasy VII: some characters use guns, others use swords, magic and technology both coexist. Treasure of the Rudras often feels like the game is taking place in the middle of an industrial revolution.

The real draw for Treasure of the Rudras was not the usual ‘Save the world’ plot. It was its unique combat and magic system. On the surface, the game looks like any other turn-based RPG, but beneath it lies a deeply intricate magic system named “Mantras”. Mantras let you create your own spell, using specific prefix and suffixes. Different combinations of these enable you to create elemental spells such as ‘TEO’, this is a basic wind spell, but if you add on the suffix ‘NA’, you’re able to create ‘TEONA’- which is a multitargeted version of the basic wind spell. Going by this logic, applying the suffix ‘NA’ onto other spells will turn it into the multitargeted version. The source of these words can be taken from other enemies, or are hinted at in the lore of the game.

This can seem daunting at first, but a little creativity and experimentation is the key to mastering this unique magic system. Mantras were thought to be the main reason why the game had not been localized yet, but fan translation team Aeon Genesis managed to get a final version of their ROMhack translation released in 2006, 10 years after the game had come out. With Square leaving this game behind in the dust, the Aeon Genesis fan translation seems to be definitive way to play the game.

The SNES has one of the most recognizable sound chips of all time, allowing for some incredibly complex scores for games, and Treasure of the Rudras is no different. The game is scored by Ryuji Sasai, who had also composed Final Fantasy: Mystic Quest. The tracks composed for Treasure of the Rudras have a very 80’s heavy metal vibe, and for me personally, has the best ‘normal’ battle theme of any JRPG I’ve played. With layered instrumentation and catchy melodies, the game possesses one of the strongest and most overlooked soundtracks in Square’s history.

Considering how late the game was released in the SNES’ lifecycle, it was always unlikely to have come out in the west, but part of me wonders: what would have happened if Treasure of the Rudras did make it overseas? Would it be as revered as Final Fantasy VI and Chrono Trigger? My feeling is that it belongs in the pantheon of classic SNES JRPGs and has never really had the chance to captivate audiences worldwide. The game has since been rereleased in Japan on the Wii’s Virtual console, but we didn’t see a translation of that come over, either. It would be a shame if Treasure of the Rudras was forgotten because it never had an official worldwide release.

This odd Japanese curio managed to get a fan translation, but many other games from that era are still untranslated and unfortunately, they have mostly been forgotten. Treasure of the Rudras is a game that deserves a lot more time and attention than it got. It has all the makings of a classic, but never had a chance to shine.