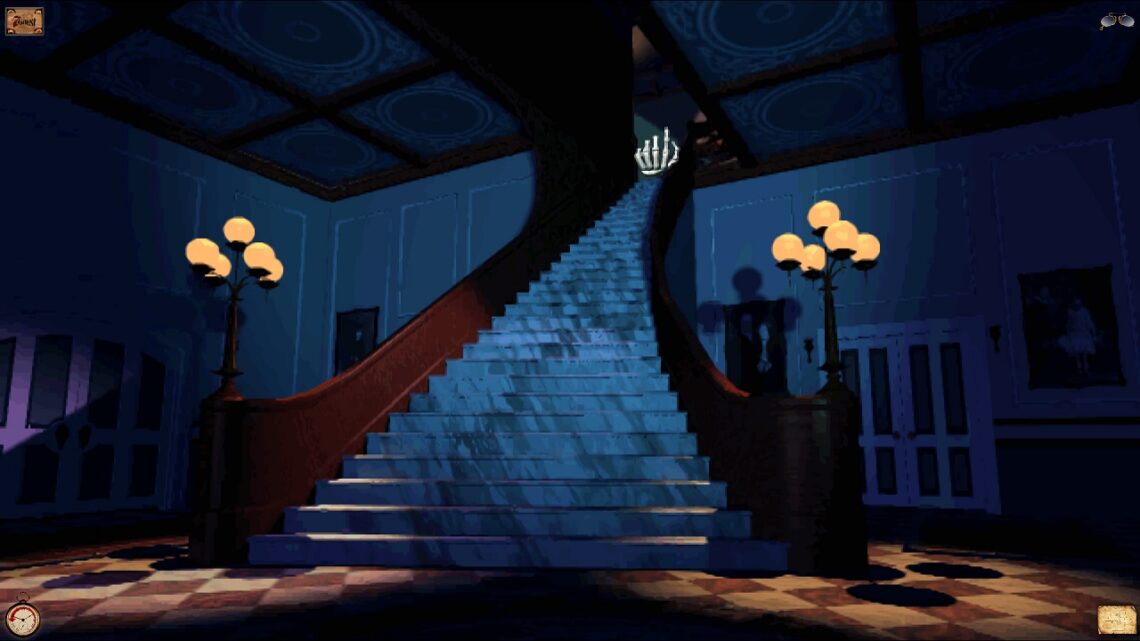 It feels like every Halloween countless websites use the hellish holiday as an excuse to publish a list of the All-Time Scariest Games. Inevitably, those games date about as far back as 1996, right around the time when Resident Evil essentially defined survival horror as we currently know it. But what about the decade before? Were terrifying, blood-curdling narratives impossible in the days before three-dimensional, “modern” gaming offered a more high-tech, immersive experience?

Was true horror present in the 16-bit era? Or the 8-bit? Or in the words of an old-school text adventure? We’ve decided to take a look back at some of the oldest and most shocking PC and early console games that paved the way for a genre we celebrate at this time each year.

Old Man Stauf built a house, and filled it with his toys
Six guests were invited one night, their screams the only noise
Blood inside the library, blood right up the hall
Dripping down the attic stairs, hey guests, try not to fall
Nobody came out that night, not one was ever seen
But Old Man Stauf is waiting there, crazy, sick, AND MEAN!

Thus begins The 7th Guest, the adult-themed, 3D-rendered, FMV-heavy horror game that virtually guaranteed you made the transition from floppy-based gaming into the CD-ROM era. A predecessor to its widely embraced sequel, The 11th Hour, this supernatural tale of murder and madness asked of players, “Do you want to play a game?” long before the Saw franchise carved its bloody niche. Set in the clockwork, puzzle-laden house of an eccentric toymaker, a series of seemingly unconnected guests – yourself being the 7th – is invited to solve a number of puzzles that ultimately place the soul of a young boy in dire jeopardy.

Incorporating full-motion video and 3D-animated environments, The 7th Guest was a fairly creepy affair for its time, though unlikely to make you scream in today’s era. The ghost of Old Man Stauf uttered his macabre witticisms like some version of the Crypt Keeper, but there’s no denying that playing the game alone, in the dark, would occasionally prove unsettling. Also, maddening, thanks to the difficulty of some of the title’s rather tedious puzzles.

Alone in the Dark

And perhaps that was an unintended, but entirely useful segue to this 1992 Infogrames title based upon the work of H.P. Lovecraft. Deemed by many to be the first-ever survival horror game, Alone in the Dark combined early polygon figures with pre-rendered, 2-D backgrounds and introduced rudimentary combat to what might easily have been a straight-up, old-school adventure game.

In this title, you play as either Edward Carnby or Emily Hartwood, one of two protagonists who journey into the heart of Derceto, a mysterious Louisiana mansion, in search of a famous artist’s suicide note. You’ll soon come to realize through a series of meticulously placed historical records that the house belonged to a former cultist, hence the zombies, demons and ghosts that are so fervently attempting to murder you.

While the graphics are almost laughable by today’s standards, their significance at the time was immense, and the atmospheric sound design and fixed camera angles combined to offer a real sensation of palpable horror that rings true even today. And for that reason alone, games from Resident Evil to Dead Space owe their success to Alone in the Dark.

Gabriel Knight: Sins of the Fathers

While The 7th Guest and Alone in the Dark offered technological advances in the burgeoning horror genre, Jane Jensen’s Gabriel Knight series was undoubtedly the most successful combination of storytelling, character and narrative in the early days of PC adventure games. The original title in the series, Sins of the Fathers, was visually no different than most adventure titles at the time, closely following the point-and-click Sierra mold, but its New Orleans setting and well-researched, adult-skewed tale about a series of Voodoo murders offered an experience worth nothing less than a Stephen King or Anne Rice novel.

Future games in the series included The Beast Within, a look at European werewolf lore during the reign of Germany’s King Ludwig II, and Blood of the Sacred, Blood of the Damned which tackled some of the same mythology later popularized in The Da Vinci Code, but with a vampiric spin. Each of these titles offered a narrative maturity unusual in adventure gaming, even if the second and third chapters in the franchise became weighed down by their own gameplay mechanics. But Sins of the Fathers remains a harrowing and well-told mystery that may not terrify modern audiences by virtue of its current nostalgia, but would no doubt serve as the basis for a first-rate feature film, beat-for-beat.

Most gamers know Roberta Williams as the woman responsible for the creation of the King’s Quest franchise, and summarily the foundation upon which Sierra’s early success was constructed. The whimsical, fairy-tale nature of those games seldom hinted at a more morose mind at work, but the release of Phantasmagoria, one of the company’s first attempts at FMV gaming, illustrated a much darker and utterly gruesome side to the celebrated designer. Taking place in the bowels of a mysterious mansion, Phantasmagoria tells the story of a wife and her husband discovering the secrets of Carno the Illusionist, and inadvertently releasing his demon. In addition to being surprisingly bloody, and featuring a handful of stomach-churning kills (also, acting), the game included a much discussed rape sequence, perhaps the most mature piece of content found in a mainstream, adult-themed game at the time.

The title, which incorporated live actors into a pre-rendered environment, spawned a lackluster, albeit well produced, sequel that utilized both still images and directed video to avoid any sense of digital locations. Phantasmagoria wasn’t the first FMV horror game – fans might remember titles like Night Trap for the Sega CD some years earlier – and it certainly wasn’t the last. In fact, the sci-fi thriller The Ripper, released the year after Phantasmagoria first appeared, featured a rather respectable cast, including Christopher Walken, Karen Allen, Burgess Meredith and John Rhys-Davies, in a bid to further popularize the format. But when most gamers think back on the early days of FMV horror, and the one genre that really dominated the short-lived trend, it’s Phantasmagoria that they remember most.

Almost everybody has a story about where they were when some event of great historical significance occurred – the bombing of Pearl Harbor, the JFK assassination, the morning of 9/11 – but only geeks have similar recollections about much less significant things. Take, for instance, where and when you had your first experience with Doom. You’d already played Wolfenstein, so the early FPS genre wasn’t entirely a surprise, but up until that moment, you’d hardly played a game that had enthralled and disturbed you more. My own childhood memory involves playing the game in our new, unfamiliar house, late at night with the lights off, and emerging into the long, dark hallway down which I had to scamper in order to reach my bedroom.

An abandoned facility far from Earth. Roving demons, revved up chainsaws and fiery portals straight to Hell. First-rate, 3D graphics and nuanced play mechanics. And a relentless, unforgiving pace that wasn’t above taking its time, slowing down, and lulling gamers into a false sense of safety. For its time, the original Doom was both an innovative and terrifying experience, unmatched by even its most modern iteration.

Those of you who still own an Atari 2600 would hardly consider Haunted House to be a scary game. But regardless of whether a floating pair of eyeballs attempting to outrun a selection of bats and other creatures remains unnerving in our modern age, this is certainly one of the earliest attempts at embracing the darkness in 1980’s game design. If you think back to your first encounter with the game, likely sometime in our relative youth, the simple presentation and overall idea of the title might certainly have freaked out a more impressionable child.

Somewhere between the skin-crawling campfire story and the expertly made horror film, Stephen King and countless other authors made their living through chill-inducing literature. In fact, given the failure of many a B-grade horror film and the relative power of the written word, it could be argued that few things can unsettle us more effectively than a well constructed sentence. And while the early text adventures – namely the Zork titles – were hardly the work of the Bard himself, the simplicity of being told that you’re trapped in a dark, lightless cave, surrounded by creatures, was suitably disturbing for the pre-graphics era of gaming.

Enter The Lurking Horror, perhaps the most horrifying chapter in Infocom’s library of text titles. Set against the real-world backdrop of G.U.E. University – a nod to the Great Underground Empire referenced in the Zork franchise – The Lurking Horror also drew its inspiration from Lovecraftian mythos, a common trend in many early horror games. Forcing you to explore a virtually abandoned university campus while avoiding zombies, demons and other evil creatures in the midst of a harrowing snowstorm, The Lurking Horror was a surprisingly tense and well written adventure.

It was, in some sense, the last moment in gaming that demanded of the gamer the key ingredient to any worthwhile horror endeavor: Imagination.

The Shadow of the Comet

Lastly, it’s worth mentioning that Infogrames followed up Alone in the Dark with further exploration into the world of Lovecraft in the tragically overlooked adventure game, The Shadow of the Comet. A strange combination of the Dunwich Horror and Shadows Over Innsmouth, this title provided a finely crafted, if awkwardly controlled, experience that somehow managed to consistently terrify the player with its constant threat of death. The animations, puzzles and overall story, involving an astronomer tracking the path of a comet over the small town of Innsmouth, perfectly set the stage for a deeply Lovcraftian tale that may still be, even today, one of the best adaptations of the master’s works in the gaming genre.

no love for shivers? they weren’t really action games but they certainly creeped me out when i was a kid.

Doom and Friday 13th was pretty scary. Dead Space was a bit scary when played with headset in the middle of the night…

Don’t forget about sweet home on the nes!

O man I remember playing 7th Guest at a my buddies house (who had a good computer that could run it at the time) and we were so scared playing it. Than we played the Are You Afraid Of The Dark? PC game and it was soooo good. Personally my #1 horror game has to be Silent Hill 2, it’s just so messed up and creepy.

What about D for Sega Saturn?

Friday the 13th for NES. That game scared me for the fact that you never knew when Jason was gonna pop out and strike..it could be on the trail..in one of the cabins. Just not knowing when he was pop was nerve racking. Not to mention fighting him was almost impossible without a Game Genie.