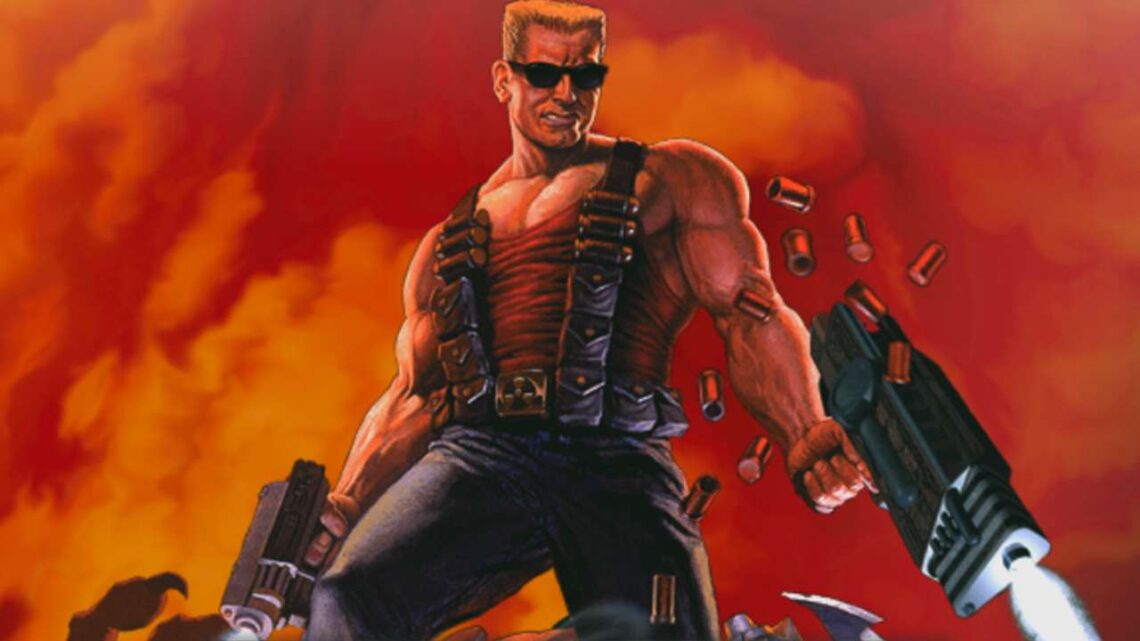 “Shit Happens”. So said Duke Nukem in the classic first-person shooter Duke Nukem 3D, one of the most iconic and popular games of the 1990s. And a lot of shit has happened in the world of Duke Nukem since DN3D’s release in 1996, but unfortunately the action has all been behind closed doors of development studios and corporate board rooms rather than on gamers’ screens.

Duke Nukem Forever, the sequel that was announced in 1997, never graduated from myth to reality and has become the most famous game never made. With the recent closure of developer 3D Realms it seems gamers may not get the chance to play with the Duke again… although if conspiracy theories are to be believed it’s all part of an elaborate marketing ploy and there’s a possibility that DNF could rise from the ashes yet again.

Why do so many people care about the fate of Duke Nukem and a sequel that has been 12 years in the making? Well, if you were too young to play Duke Nukem 3D at the time it was released in 1996 you may not appreciate how innovative it was in terms of FPS gameplay and weaponry, and how it helped push gaming into adult territory.

Duke Nukem 3D was one of the first games directly aimed at mature game players and included irreverent humor and explicit sexual themes within the gameplay. It poked fun at American consumerism, Hollywood culture and sex in the media. For example, Whoopi Goldberg’s PG-rated movie franchise ‘Sister Act’ turned into an X-rated attraction in Duke’s dystopian future where pornography is the primary form of entertainment. There are also visual or audio nods to The Terminator, Aliens, Army of Darkness, Star Wars, Dirty Harry and Die Hard throughout the levels.

The ultra-masculine, non-PC character of Duke Nukem was both a parody of and homage to ‘80s action movie stars (Sylvester Stallone’s Rambo being just one obvious example). The fact that a first-person shooter had a visible and charismatic hero was itself a revelation after the anonymous grunt heroes of Doom, Marathon, Star Wars: Dark Forces and other early FPS classics. It was one of the first games that could have been turned into a Hollywood movie, with the requisite mix of violence, humour, sex and charismatic hero and villains.

The game’s violence and sexual content caused controversy in many countries. In Australia, the game was originally refused classification, primarily because you could kill topless strippers. 3D Realms repackaged the game with the parental lock feature permanently enabled, which earned it an MA15+ rating – although a patch freely available on the 3D Realms website allowed players to disable the lock and play the original uncensored version. When the OFLC discovered this, it attempted to have the game re-banned but as the distributor had notified them of the patch the MA15+ rating had to stay. 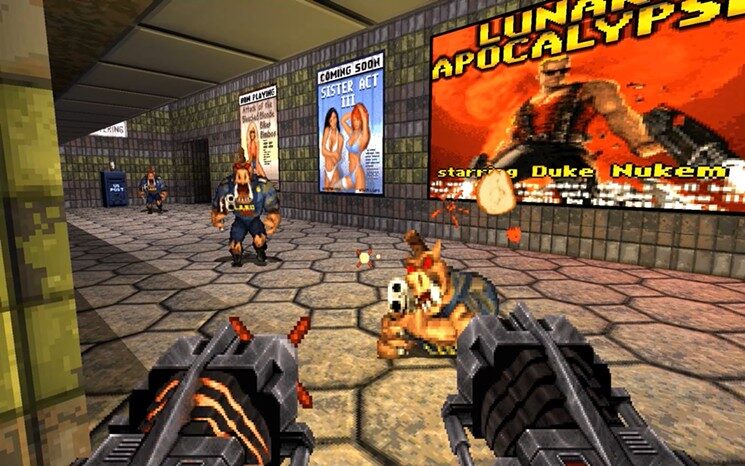 Duke Nukem 3D was an immediate hit and like all successful titles, this means a sequel should have followed quickly. And initially this seemed to be the case. Duke Nukem Forever was officially announced on April 28, 1997 – 3D Realms licensed the Quake II engine and stated the intention of releasing the game no later than mid-1998. However, 3D Realms did not get the Quake II engine code until November 1997, and screenshots of DNF that appeared in 1997 were simply mock-ups using the Quake I engine.

3D Realms unveiled the first video footage of DNF at the May 1998 E3 convention held in Atlanta, USA, and gave gameplay and technical demos behind-closed-doors to selected media. I was fortunate enough to be one of the selected journalists to be given a glimpse of the game in action and can confirm that while it was certainly far from complete it was not vaporware – DNF did exist and it seemed to be a year or so away from release.

However after E3, 3D Realms announced it was switching from the Quake engine to Epic’s Unreal Engine. 3D Realms co-founder and Duke creator George Broussard said that the transition from the Quake to the Unreal engine would take from “a month to 6 weeks” and that the game would not be significantly delayed. Unfortunately Broussard was obviously talking out of his ass as 1998, 1999 and 2000 came and went with no sign of DNF.

A two-minute video of DNF was shown at 2001’s E3 but the game then disappeared again, and apart from the occasional leaked screenshot and video on the internet it has remained more fiction than fact for the past decade. Almost annually rumours circulated that it would appear at E3 but even though 3D Realms kept saying the game was still in development, the years kept passing by without any concrete proof.

DNF became the gaming industry’s most infamous delayed project. It would have been a complete joke and quietly forgotten like other vaporware had Duke Nukem 3D not been such a beloved game – gamers wanted to see a sequel and seemed prepared to wait (however impatiently) for DNF to finally arrive.

But why would 3D Realms spend 12 years creating endless revisions of a game that was never released? Delayed release dates have plagued the game industry for years but DNF beats them all. It seems the fault belongs to the quixotic co-founders of 3D Realms, George Broussard and Scott Miller, who made it clear from the company’s founding that they were not the type of guys who would be pushed around by publishers or arbitrary release dates.

Some telling quotes from Broussard and Miller include “3D Realms are die hard game players who make games without marketing pressure, corporate management, or arbitrary release dates”, and they promoted their “freedom from arbitrary completion date pressures, which allows the game to be made on its schedule, and not some suit’s schedule”. And then there’s this one: “Design is all that matters… we don’t even make game budgets. Never have, never will. They’re not important to us because we just won’t release a game until it’s done to our high standards, regardless of the extra money it will cost us”.

That stance is admirable in one sense but ultimately means 3D Realms spent 12 years trying to meet their internal standards of excellence but not succeeding. As Duke himself would have said – “Oooooh, that’s gotta hurt!” Someone really needed to tell them to get it together and finish or “I’ll rip your head off and shit down your neck!” (more immortal words from the Duke).

And ultimately publisher Take-Two did exactly that but in a manner that may mean DNF will never be released. 3D Realms was shut down on May 6, 2009 due to lack of funding. Take-Two stated that they still hold the publishing rights for DNF, but they were not funding the game. On May 14, Take-Two filed a lawsuit against 3D Realms over their failure to complete Duke Nukem Forever.

But rumours and conspiracy theories are bubbling away on the internet suggesting that DNF may not be totally doomed. One rumour that doesn’t seem particularly far-fetched is that Microsoft is buying 3D Realms and publishing DNF as an exclusive Xbox 360 title. But game developer Charlie Wiederhold, who worked at 3D Realms from 1998 to 2006 believes that there was a conspiracy between the heads of 3D Realms, Epic Games and others to keep DNF in almost perpetual development for the PR and marketing purposes of boosting the Unreal Engine and creating a game that will be remembered for all time.

And Duke Nukem Forever may well be remembered for all time, but if it never sees the light of day it will be for all the wrong reasons. Fans need not despair just yet, as even though Duke may appear all out of gum, he’s still quite capable of kicking ass if the right deal can be done. Millions of Duke fans are awaiting news of another resurrection.

Now…have you got balls of steel?

Also check out: Duke Nukem Forever may be dead, but the Duke is indestructible.

thank god there not closed. but it looks like DNF has been canned 🙁 hopefully 2k can get thr rights to it so someone else can finish it off. i realy want to play that game the vids look so cool and bring me back to the old days when i was like 8 playing my first game at my cuzs house. good times.
btw when the hells section 8 comming out the devs did a interview with ign like 2 weeks ago saying the games almost finished and should be out within the month.

To be honest, I couldn’t give a shit about Duke Nukem Forever anymore. I’m more disappointed about not getting Prey 2. I liked the first one and was looking forward to the sequel.

that still might happen. It was developed by Human Head and only published by 3D Realms. Another publisher might be able to pick it up.

At least that is my recollection

Hi five for the Marathon mention.