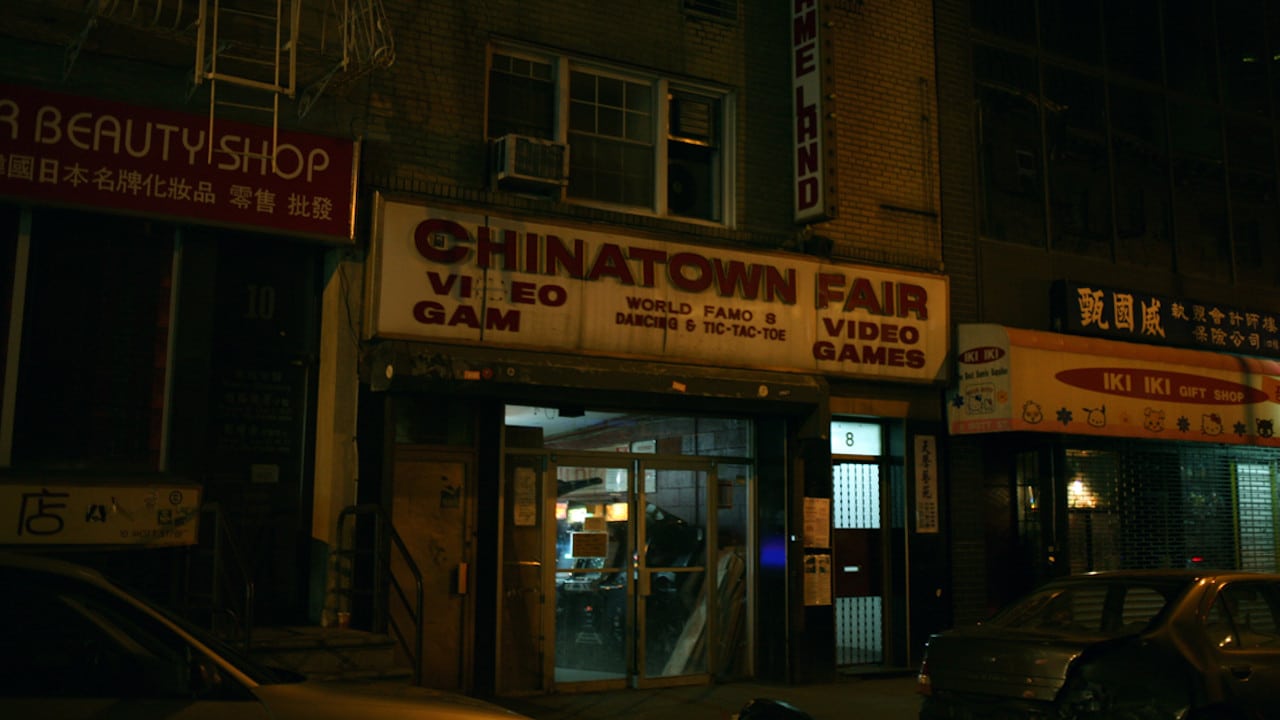 New York City used to be full of arcades. From Times Square to Coney Island you could find people playing arcade games all day and all night, but it wasn’t meant to last. Home consoles and a changing city left the arcades starving for quarters, and soon the videogame wonderland was no more. By the 1990s your best chance to play arcade games was at pizzerias and bodegas, and there were no other options. But there was one… if you dared to head all the way downtown and avoid all the Chinatown gangs.

The Lost Arcade focuses on the only authentic arcade that survived while every other non-corporate place shuttered, the legendary Chinatown Fair (CF). Players were driven to the tiny, L-shaped location out of necessity, but it stayed open thanks to a hardcore community of players who increasingly became obsessed with fighting games and hung out at the place long into the night, well past closing. It wasn’t just an arcade, it had a life of its own, and the doc touches on the many people who worked there, who lived there, who grew up there. 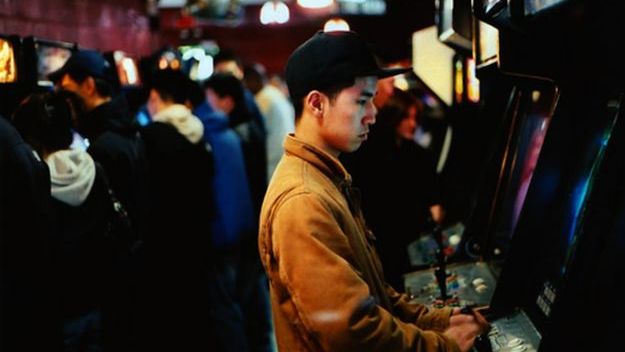 The filmmakers started shooting footage back in 2011 when they realized that CF was about to close. The story of the CF goes back decades before that, though, back when it was famous in the 1980s for having a chicken that could beat you at tic-tac-toe. The owner of the arcade that we meet (Shams, a sweet old Pakistani man who ended up falling into the business and loving it) ran it for years but was forced to close the place after he couldn’t afford it anymore due to rising rents. The footage shows a distinctly New York place full of rowdy folks drinking in a tiny room full of arcade machines that are constantly being repaired and worked on. It looks like a mess, but a fun one. 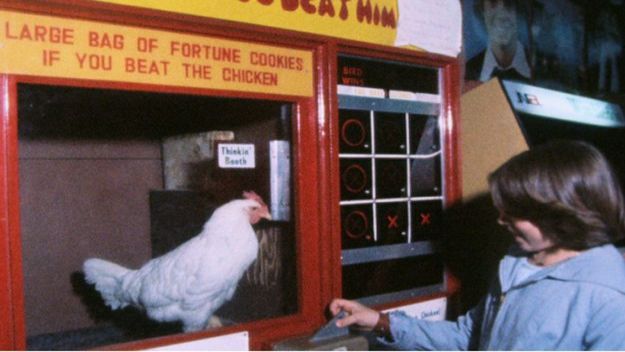 Arcade manager Henry Cen is interviewed at length about how much the place meant to him, and it truly seems like he was the only thing that kept it going. He’s completely self-taught, learning how to run a business and repair machines just from his years of working there. Another major presence in the film is Akuma Hokura, a man who ran away from home and was living on the street until Shams took him in, giving him a home and a job. This place means everything to him, and watching the community they had built up over all these years be shattered and cast to the winds is hard for him. 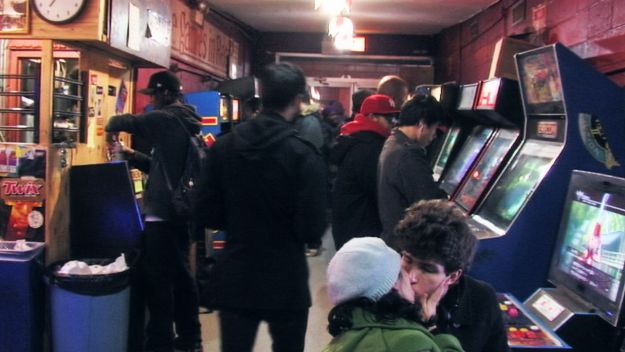 Watching these people lament the death of their home is hard, but Chinatown Fair itself didn’t die. Soon after it closed it was reopened by an arcade lover named named Lonnie Sobel who tried to turn it into a family friendly environment, brightening the place with colorful paint and putting in ticket redemption machines. As you’d expect, the former regulars didn’t appreciate the changes to their hangout, and Lonnie seemed surprised that the new tactics didn’t work with the audience, but it’s obvious that catering to a larger audience wasn’t a bad thing. As one interviewee put it, she didn’t feel safe at the old place, and the inclusion of music games and others besides the hardcore fighting machines meant that a new crowd of gamers emerged, perhaps a younger and less intense one, but gamers nonetheless.

The film is a eulogy to the Chinatown Fair- the directors even admit as much- and as such it doesn’t have any room to be critical of it. The Lost Arcade is a wonderful look back at a specific moment in time, but it’s also one of those documentaries that exist solely for the fans of the material. You’ll find no discussion of arcade culture or how toxic it could get. It doesn’t matter that this was clearly a good ol’ boys situation and more inclusion should have been welcomed, the documentary mourns what was once lost.

It’s completely fair, but the documentary catches a lot of the participants in the moment of time before they start to realize that you can’t go back home. 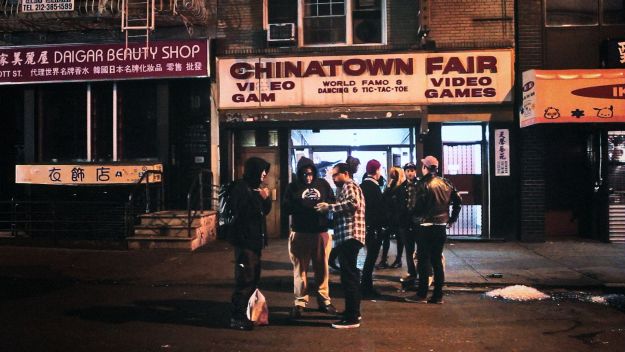 Look, everyone has their own “Cheers”, or at least the lucky ones among us do. Especially New Yorkers. Mine was a bar (Hell Gate Social in Queens), a wonderful place with wonderful drunk people. Any time I went there I had someone to hang out with and commiserate with, and there are more stories about late nights there than I could ever write down, or ever want to. But after a good run the bar was sold, the new owners didn’t know what they were doing, and it closed a couple of years later. Did it suck? Sure, but the fact was we had all grown up. It’s always nice to look back on your past with rose-colored glasses, but the more you think about it the more you start to realize how much the reality doesn’t match up with your memories.

It’s the same with Chinatown Fair. My personal experience with it was very limited, as I only stepped foot it in once as a teen in the late 90s, but I remember the place was a mess. It was the kind of mess that I, a burgeoning metal/hardcore kid in New York City, really appreciated, but it was a friggin’ mess nonetheless. It was loud and smoky and crowded and dangerous and while those are all very fun things, New Yorkers tend to look back on the edge of the city as a good thing and lament how soft it’s become. It’s easy to be torn- yes, the city is now less exciting and full of boring stores and boring people, but at least you don’t have to watch your back like you once did.

Maybe that’s why it’s hard to look back at the closing of Chinatown Fair as anything but a good thing. Its time had come and gone and even though the place was gone, the memories will always stay. Besides, the former employees seem like they’re doing really well in their new endeavors. Henry Cen went on to open Next Level in Brooklyn, which has become a huge fighting game venue and branched out to become a home for card games as well, and CF is still open as a family amusement location. The city is now full of Barcades which (legally, for the first time) provide much-needed alcohol with arcade games and are safe spots with diverse crowds.

Sometimes it’s silly to lament what was and how it’s changed without realizing that it’s mostly changed for the better. In the moment, being part of Chinatown Fair was probably the greatest thing ever, as nearly everyone here seems to think. But it was just a moment, and if you weren’t there, you missed it. The Lost Arcade pays tribute to that- a fleeting, distinctly New York moment that will never be again.