For the follow-up to its genre-defining Modern Warfare trilogy, Infinity Ward needed a ‘wow’ factor. Though the developer was largely responsible for establishing Call of Duty as a blockbuster in the first place, by this point its studio heads and a big chunk of talent had left to form Respawn –  so not only was there a certain degree of ‘difficult second album’ syndrome, but it felt like the studio had to prove itself all over again. The next Infinity Ward COD would not only set the tone for the new generation of consoles, PS4 and Xbox One, but it would show whether the developer still had what it takes.

Call of Duty: Ghosts was the result and, for the most part, it underwhelmed.

An ambitious but ultimately lackluster series entry criticized by players for its senseless campaign and overemphasis on dog physics technology (not a joke), the game failed to introduce many worthwhile new ideas. Scratch beneath the surface, however, and you’ll discover that its best one remained hidden and almost unnoticed: Extinction. This is a team-based survival mode, primarily developed by Neversoft prior to its absorption into Infinity Ward. It was the last time Call of Duty played with the familiar yearly format and displayed flickers of true creativity, before falling into the rinse-and-repeat pattern of subsequent years.

Intended to act as a fresh take on Treyarch’s hugely popular Zombies mode, which remains a huge focus of the COD ‘package’ even now, Extinction was a more than worthy competitor. Partly this is because, for a sub-mode, it’s incredibly fully realized – the kind of treatment that only a series as moneyed and resource-heavy as Call of Duty could (and still can) afford to gamble on. 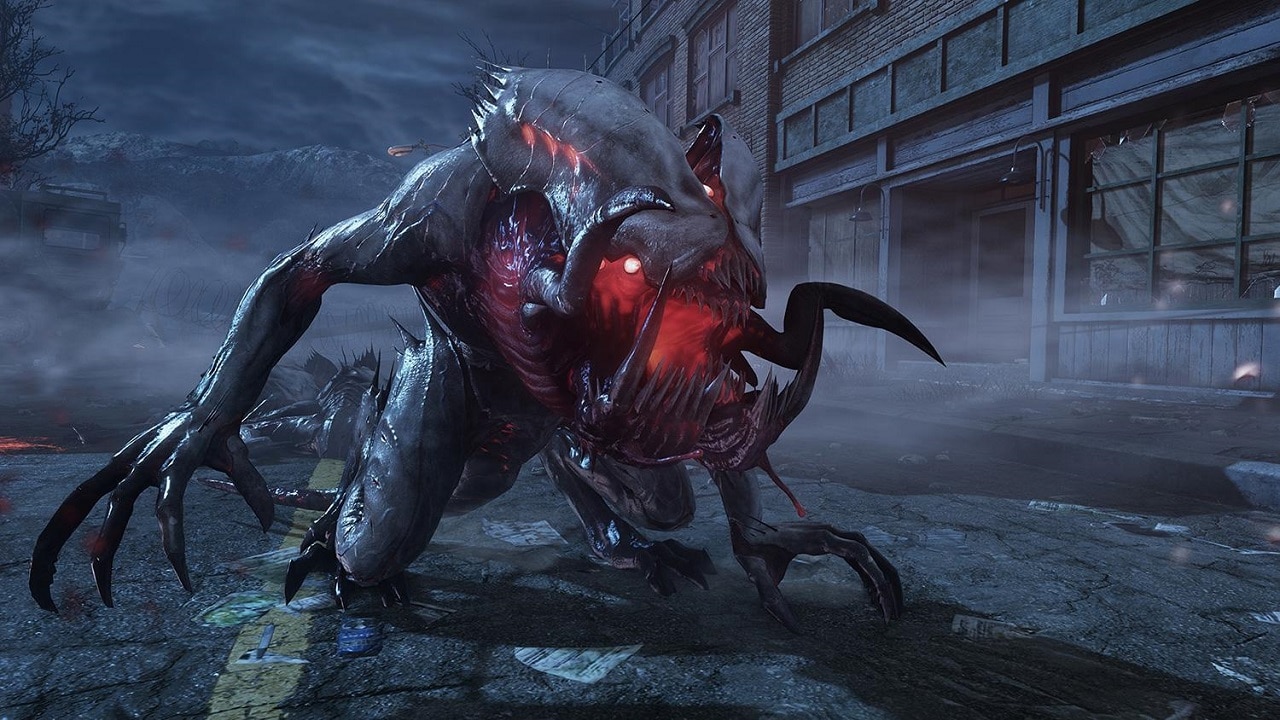 A distinct step away from certain expectations Call of Duty players had built up over the years, the alien-infused mode emphasized objective-based cooperative action, unpredictable enemy AI, and ‘cinematic moments’ designed to emerge naturally during play rather than being scripted events.

Extinction took place within an alternative timeline outside of Ghosts’ formulaic main campaign, casting you and a team of three chums as the second squad of specialists sent into a quaint Colorado town following reports of an otherworldly menace. The previous team’s efforts to thwart the Cryptid hordes conveniently failed, so it falls to you to reach the tactical nuke which didn’t quite detonate the first time around.

The basic premise was a perfect setup for for taking hordes of extra-terrestrial fiends to task, but what sets Extinction apart is how it uses this as a foundation rather than the focus – distinguishing its episodes with objectives that meant different approaches and tactics were required as the mode escalated. The first episode, “Point of Contact,” requires the team destroy three alien hives – while completing another objectives to help decimate the forceful invaders.

Terminating the hives required having a specific team member haul the drill needed to destroy them throughout the map, letting players rack up money which could then be pooled together to bolster your squad’s strategy further. Every time you played, the hives would be found in different locations. 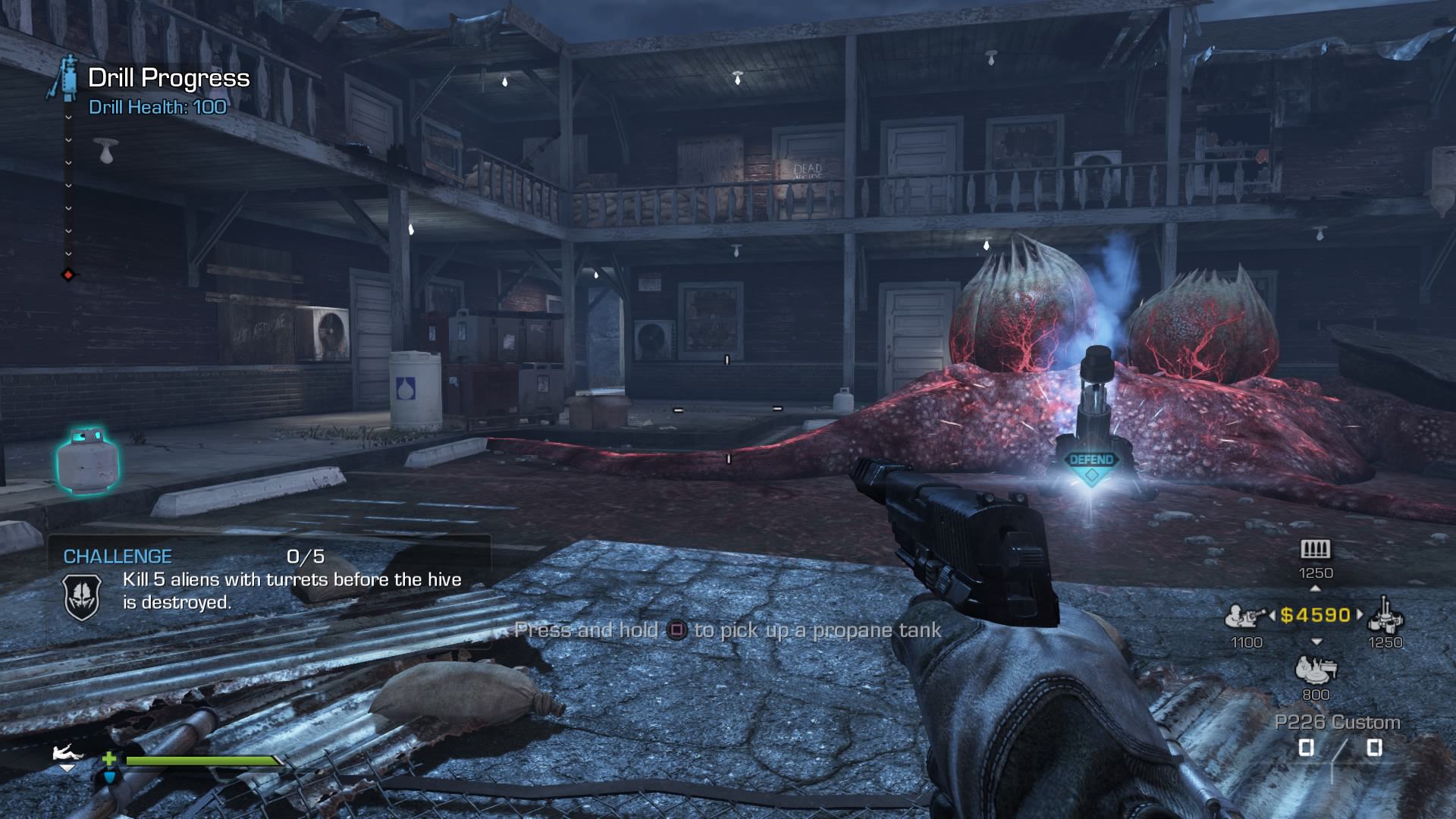 Spending the cash is also core to Extinction and what comes to really distinguish it from your average horde mode. Money might mean summoning an attack helicopter for aid, holding a point with an enemy-slaying turret cannon or, if you’re really flush, turning the bio-luminous creatures against one another. Such variations in approach are punctuated by momentary lulls in the action as you and your team advance from point to point, which gives Extinction a rhythm all its own; the abandoned city streets ever-shifting between trigger-pulling fear and somber dread.

Extinction rewarded players for deftly switching between defensive and offensive tactics when fending off the erratic Cryptid enemies, and learning the mode’s intricacies was essential for its larger challenges which could take anywhere up to an hour. It shares something of Left 4 Dead’s relentless push-and-pull, not least in the way that enemies’ unexpected and volatile behavior can swiftly take a situation out of your control.

This is best encapsulated by the Scorpion enemy subclass. A dangerously nimble strand of Cryptid that featured a tail capable of shooting out harmful gas, these little blighters give you a tough time by continually slinging themselves from building to building – which might not sound like much but, in introducing an element of verticality, makes you realize how much of COD (even now) is played purely at eye- and ground-level. And the thing is that COD’s core gunplay is so robust that it can handle these switches effortlessly, almost like shifting into a gear it always had.

Extinction even played with Call of Duty’s love of cinematic spectacle in clever ways, such as how Point of Contact’s end sequence requires you to navigate all the way back to the map’s starting location. The nuke you’ve fought so hard to reach is triggered, starts counting down, and the team has to work its way back through Colorado from city edge, to lodge, to helicopter site – a pulse-pounding action retreat that has nothing to do with cutscenes or scripted events, but absolutely gets the adrenaline pumping as the four of you cover each other on the way out while the aliens give chase and desperately make their final assaults.

For all of Extinction’s innovations in the tried-and-tested horde mode, it didn’t make an impact on COD. Perhaps that’s no great surprise. It was part of one of the most divisive Call of Duty entries to date, but also fell victim to the archaic DLC release model which insisted on segmenting the userbase as more maps were released. Each DLC release saw thousands of players cut off from the ‘full’ experience even if the additional four episodes – Nightfall, Mayday, Awakening and Exodus – were great in and of themselves.

Ghosts existed on the borderline of big changes to DLC, as mainstream AAA began to adopt the games-as-a-service model and move away from discrete chunks that also served to chop up a playerbase. Released in 2013 and facing the additional challenge of catering to the existing 360 / PS3 audience while delivering a showpiece for the next generation of consoles, the game bears the scars of compromise and poorly-chosen areas of focus. The series has remained a commercial titan but, arguably, has been creatively spinning its tires ever since this transition – with modern competition like Overwatch making its multiplayer offering feel almost archaic in structure.

It makes you wonder about Extinction’s lack of impact: a great mode that was unmistakably ‘COD’ in feel but also creative in how it used that to deliver something new. Perhaps the truth is that what we call stagnation is, quite simply, what a certain strain of COD fans want. Extinction sank without trace after Ghosts, probably more to do with that game’s overall reception than anything else, but it stands as an example of how much investment this series can bring to a big idea – and then both what a brilliant job the developers can do, and how easily it can be tossed aside, never to see another iteration.

In the lead up to Ghosts’ release executive producer Mark Rubin promised, using the kind of language only an executive producer could love, “a new sub-brand, a new engine, and a lot of new ideas and experiences for players.” Extinction was clearly intended to become a big part of COD’s identity – perhaps even a challenger to the all-conquering zombies. That wasn’t to be. And what a pity that the last time COD truly moved out of its comfort zone, and delivered, the result went the way of the dodo.