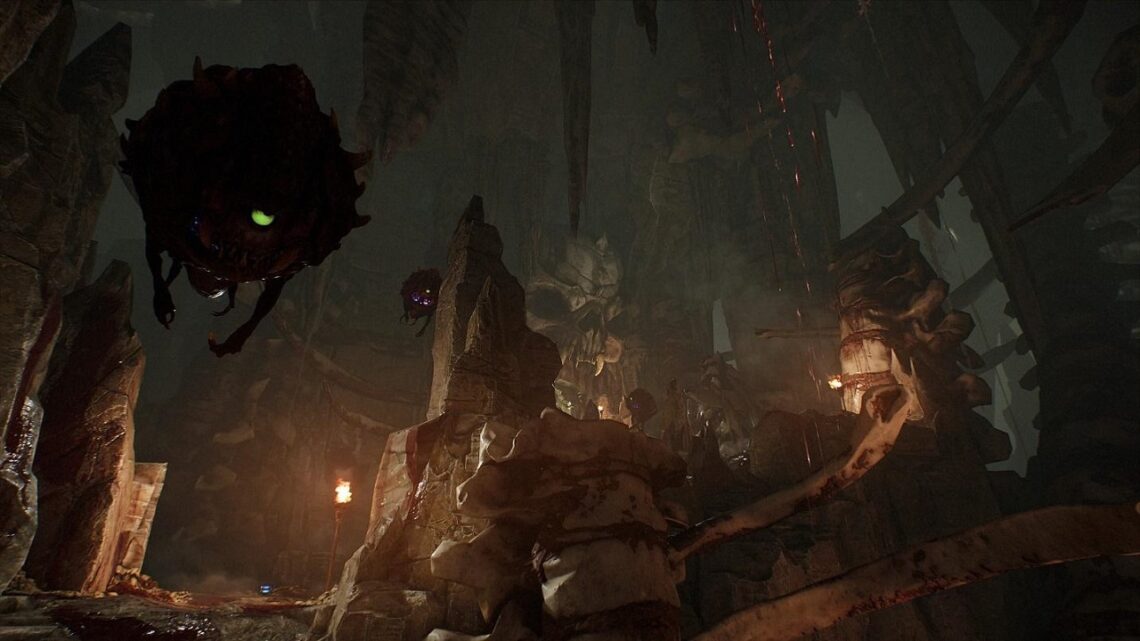 DOOM is a game that does its best to encourage you to charge through its levels at full-speed, guns blazing, and it looks terrific in motion. And yet DOOM’s photo mode makes a compelling case for another equally rewarding but very different way of experiencing its blood-soaked arenas and gory hellscapes. With a button-press the frantic action freezes, and we are free to take a stroll among the corpses and go sightseeing in the abyss. Even the raging demons start behaving themselves, posing patiently for the camera until you get their best side. Even Doom Guy, it turns out, has time to stop and smell the bloody roses. 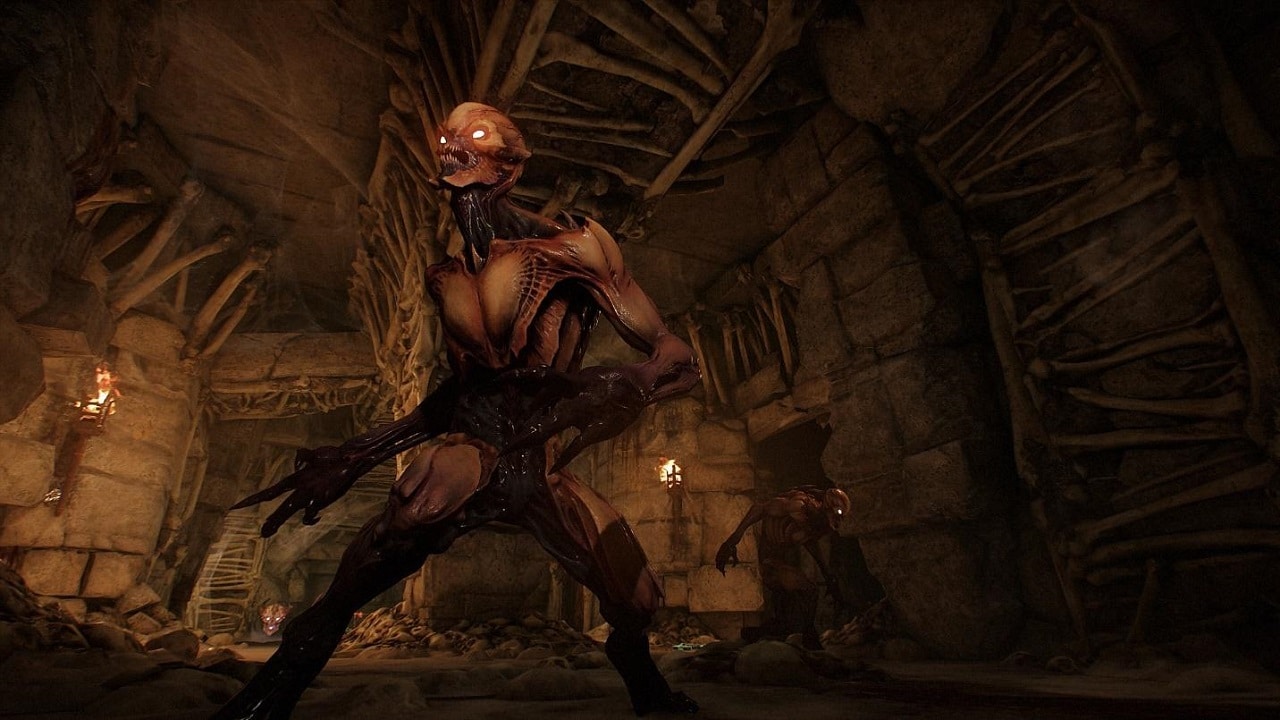 DOOM has much to offer the hell-tourist. From industrial corridors to nightmarish vistas, from muted grittiness to garish spectacle, from sci-fi architecture tinged in cool, blue light to the oppressive, dirty orange glow of hell’s depths, DOOM reveals a fantastically varied palette despite its consistently morbid and grim tone. DOOM plays with the aesthetics and iconography of horror, employing all the subtle and less-than-subtle shades ranging from the eerie and ominous, the delightful and surprising, the strange and creepy, the horrific and shocking; shades that might well get drowned out by the game’s speed and its pumping metal soundtrack. 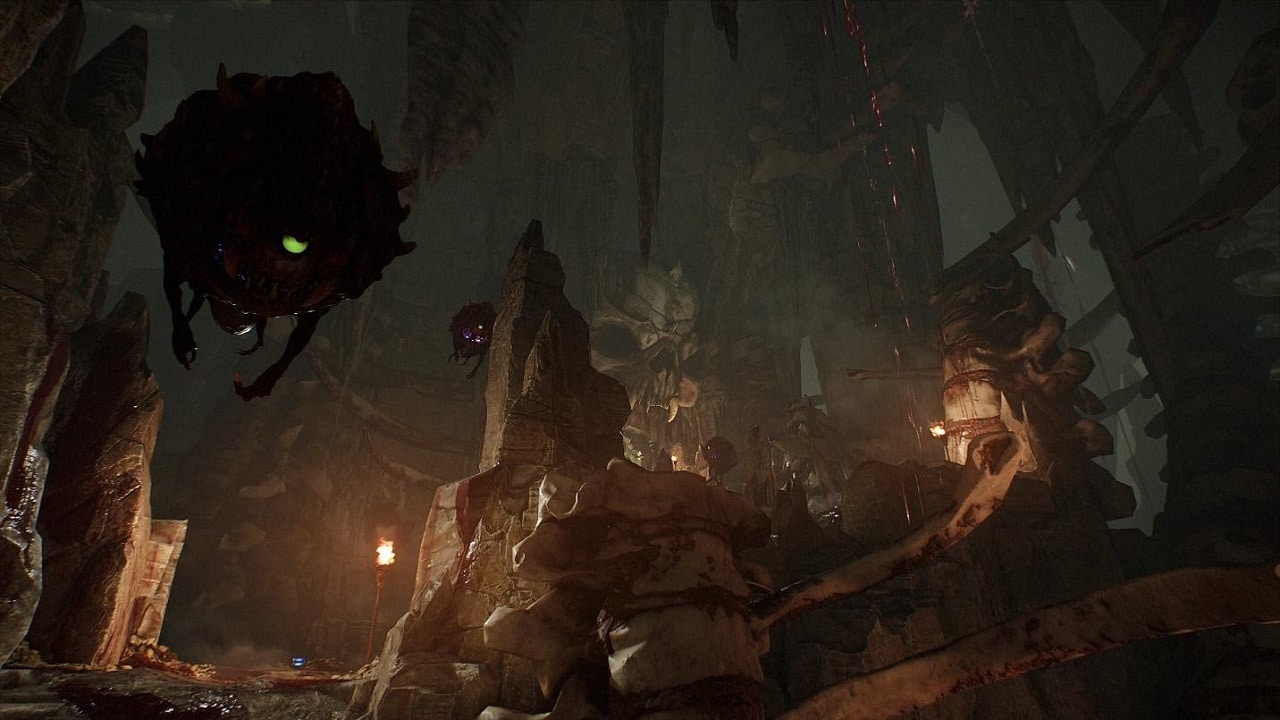 That variety can be already be seen in DOOM’s demon hordes. Many, like Imps, Cacodemons, Revenants and even its end boss, the Spiderdemon, are gleefully silly and exuberant creatures that look like they’ve sprung straight out of the pages of a comic book or heavy metal album cover. Their fierce demeanor only serves to highlight their ridiculous appearance. Some, like the Mancubi or the Possessed, veer into body horror territory. A few, like the Hell Knights are genuinely terrifying, especially upon closer inspection, and some of the more surreal ones, like Hell Razers and Summoners, look like they might have some distant relatives in the alien depths of Wayne Barlowe’s hell paintings. Speaking of twisted bodies: the arenas and hallways of DOOM are littered with corpses serving as grisly decor. There are skeletons on spikes, desiccated corpses hanging from trees or spilling out from behind crumbling walls, the bloody mush of fragmented and liquefying bodies covering the floors, flayed skins and garlands of intestines hanging from walls and ceilings. Some of it is goofy and exaggerated enough to be about as threatening as your average Halloween decoration. And yet, as you penetrate deeper into hell, the game strays further and further away from this trite spookiness to deliver some truly sinister and stomach-turning interior design. 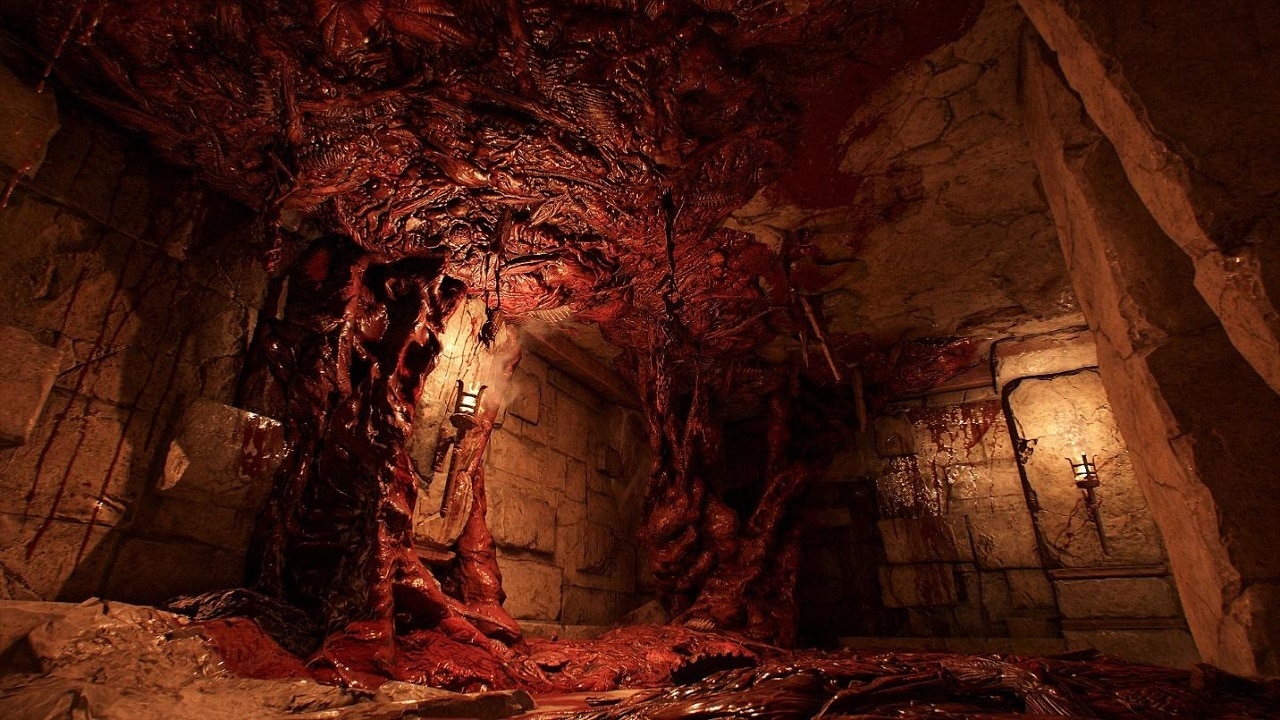 DOOM’s spaces are just as varied as the horrific bodies that inhabit them. This side of hell alone, it boasts claustrophobic, gritty industrial warrens that are reminiscent of the Alien films, sleek corporate spaces full of smooth metal and glass surfaces, and the rust-red, dusty outdoor areas of Mars. In hell, we explore cramped ossuaries, grey landscapes of dead and tortured trees, and giant, rocky islands suspended in burning-red and oppressive skies. 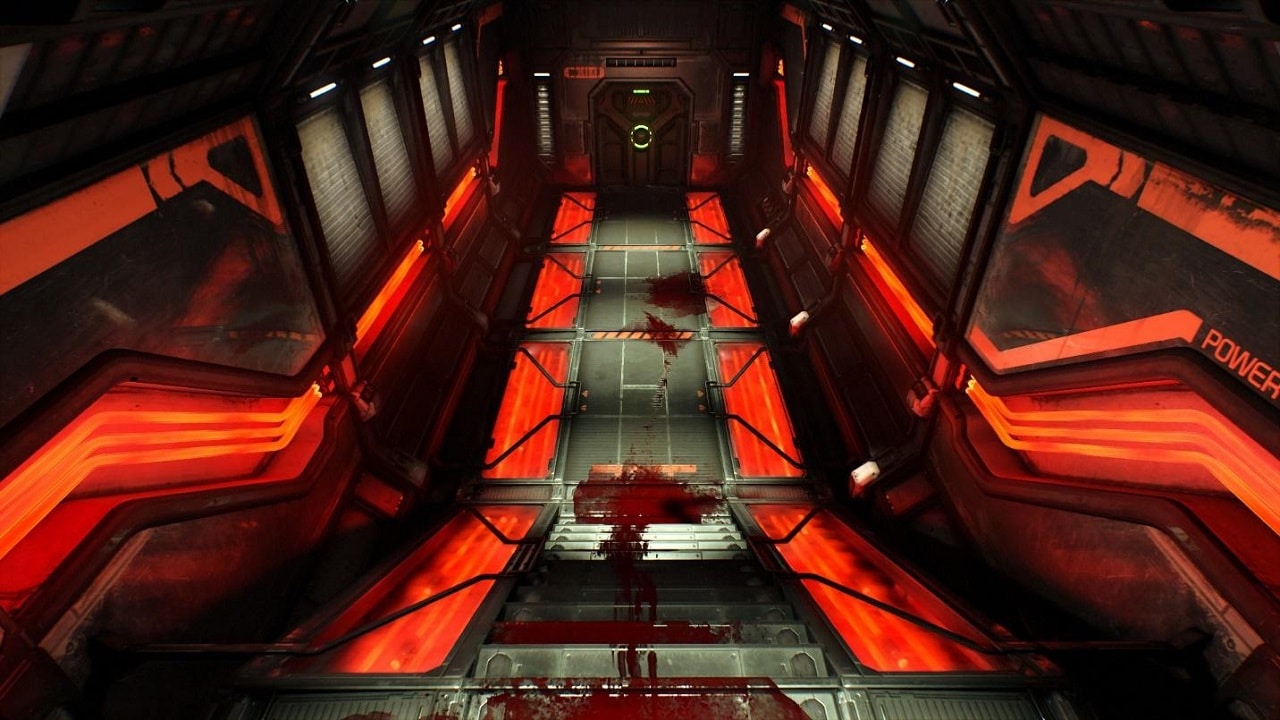 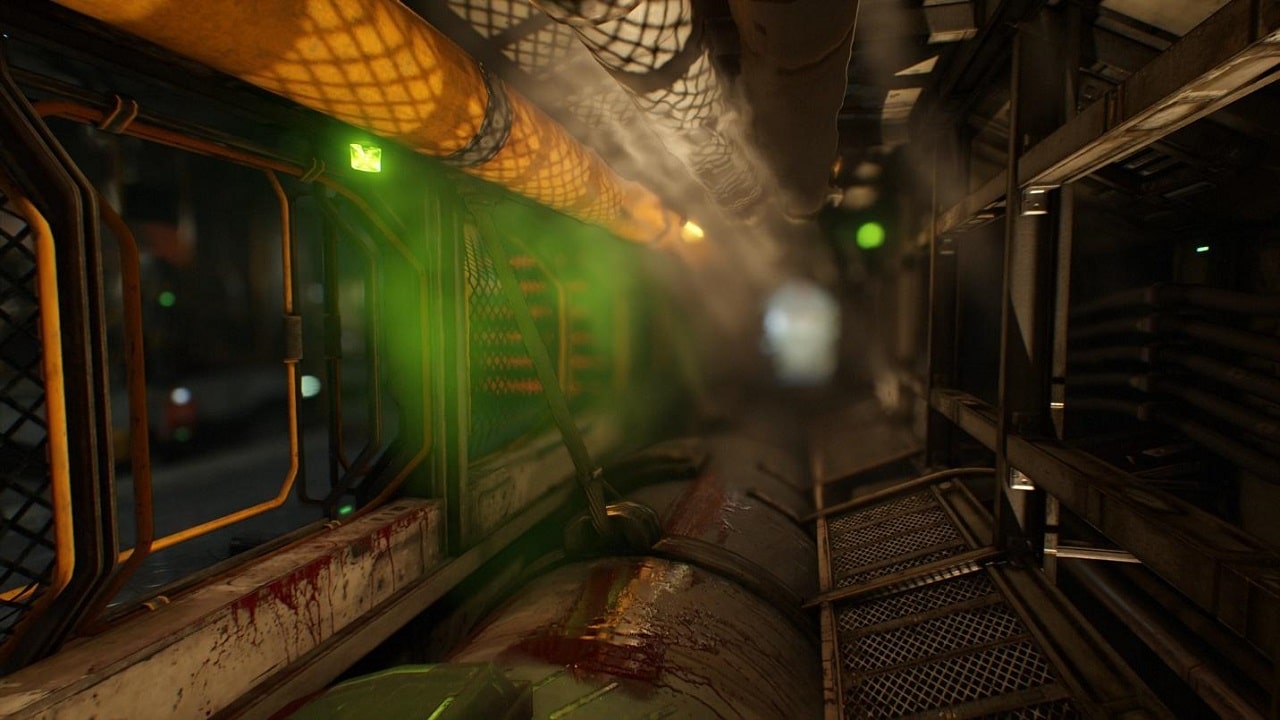 The architectural styles of Mars and hell are both threatening and hostile, but in ways that couldn’t be any more different. Mars has the sinister edges and hard surfaces of advanced technology designed by callous and arrogant architects; spaces that, even though designed by and for humans, exude an atmosphere as alien and inhospitable as Mars’ surface. 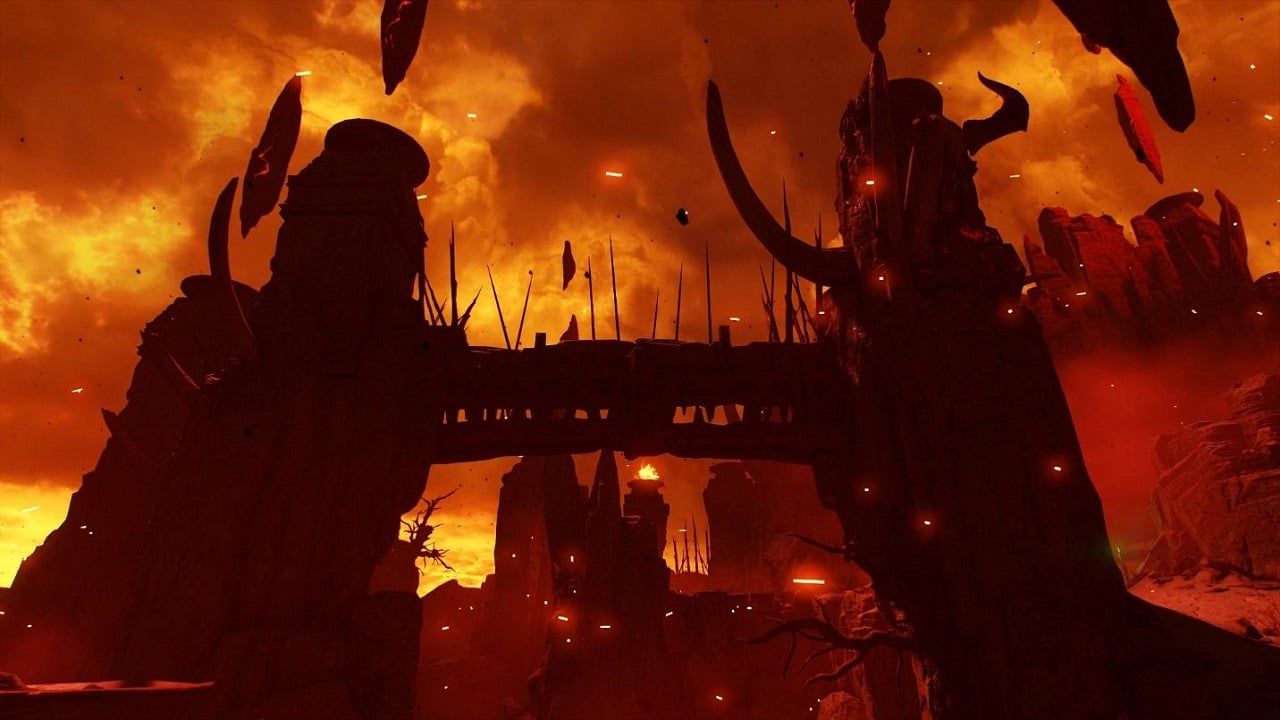 Hell, on the other hand, is characterized by ponderous architecture, crude and decaying fortresses adorned with spikes, horns and chains, structures of rusty metal, arches and pillars that almost seem like they’ve grown organically from the stony landscape around them. As different as they are, the styles of the Mars facilities and hell sometimes meet. The architects of Mars have incorporated some hellish design choices into their own structures resulting, to pick a few charming examples, in a bloody chapel with guts hanging from the ceiling and painted and flayed skins on the walls, or smooth corporate facilities adorned with demonic seals or sigils (heavily inspired by real occult symbols). DOOM’s horror does not shy away from the grandiose, as some of hell’s colossal monuments show. The theme of ‘giant demon skeletons emerging from the landscape’ is established as its own genre of architecture, with an impressive range of individual examples, some amusing, some morbid and pathetic, some downright frightening, and all exuding an aura of manifest malice. Often, these are the landmarks that guide Doom Guy to the next gate. Even though DOOM is a game defined by intimate corridors and enclosed arenas, eerie vistas of far-off places are not a rare sight. The Mars landscape especially offers some beautiful views of desolation that can seem almost painterly, with endless rows of human-made structures receding into the distance and swallowed by dust clouds and haze. The ubiquitous clouds in the sky, sometimes dense and stagnant, sometimes angry and disturbed, are a signature feature of DOOM’s landscapes that effectively convey a sense of foreboding and grandiose morbidity. DOOM draws eclectically from various visual traditions — elements of comic books aesthetics, historical occult iconography, surreal art in the tradition of Wayne Barlowe, the ultra-violence common to shooter games, the sleek corporate architecture of science-fiction, gritty industrialism — from which it creates a wonderfully dense, distinct and varied world that delights even as it thrills, shocks and disturbs; at least if you slow down long enough to be able to appreciate the effort that went into the blood-sodden environment you’re stomping through. Sometimes, it pays off to exchange your shotgun for a camera, and shoot pictures rather than demons. Sometimes, you can do both: This article originally appeared elsewhere, and was brought back to life after the website went defunct. The author is not affiliated with Ganker.

Leave me alone: speaking out against the rise of co-op – Ganker

[…] managed the astonishing logistical feat of lugging a 1990s PC round to someone’s house to play Doom, co-op can be […]