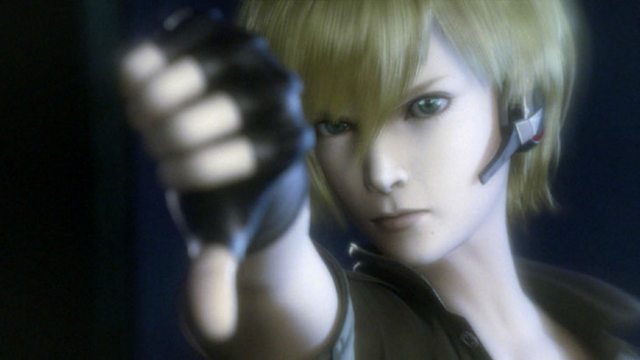 The thumbs-up sign had been used by the Galactic Federation for ages. Me, I was known for giving the thumbs-down during briefing.

I had my reasons, though… Commander Adam Malkovich was normally cool and not one to joke around, but he would end all of his mission briefings by saying, "Any objections, Lady?" He was joking, but others weren’t… At the time I felt surrounded by people who treated me like a child or used kid gloves because I was a woman.

And yet, with Adam, I was grateful for the nod… My past has left me with an uneasy soul, and as a result, it touched me on some level that Adam would acknowledge that past by calling me something delicate—like "Lady." And I knew more than anyone that every word from Adam was deliberate. My thumbs-down was a twofold response—a sign of derision at being called a lady, and a signal of my complete understanding of the mission orders. The other soldiers were always willing to support me with easy smiles despite the fact that I clearly had so much yet to learn. Among them was Anthony.

In the face of his well-meaning behavior, and that of the other soldiers, my response was to become increasingly bitter. I was a child, always with something to prove. A chip on my shoulder.

And I was angry. I felt that if I let my guard down, I would easily be broken. And beyond that, I was scared. But even in the naivete of my youth, I could see in Adam’s joking manner how close he felt to me.

Adam knows my past. And he knows me better than anyone else.

Confession time. Because I was so young when I lost both of my parents, there’s no question I saw Adam as a father figure. When I rebelled against him, I knew I could get away with it. And his paternal compassion in the face of my rebellion reinforced the special bond I felt with him.

I understood well that chances were slim that I would ever find anyone that understood me like Adam. And yet… When the time came, I still left his side. I was so young. Young and naive…

47 thoughts on “The thumbs-up sign had been used by the Galactic Federation for ages. Me, I was known for giving the…”