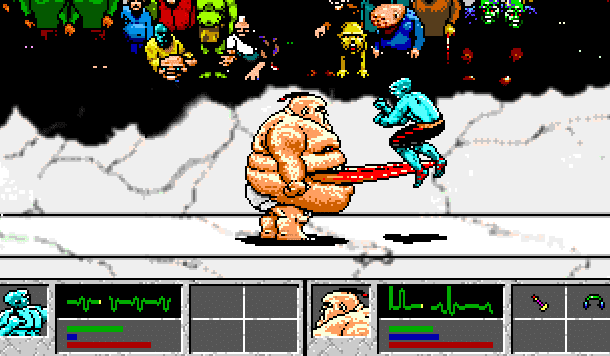 The fighting game genre is one of the biggest in the industry, but even the most die-hard fan will admit that it can often times be somewhat… odd. Serious fighting games like Street Fighter feature characters that can launch projectiles from their hands, emit electricity, or stretch their limbs to unnatural lengths. The Virtua Fighter series, which is praised for its realism, also has its fair share of goofy characters.

Most fighting games have some degree of strangeness to them, but there are those who are downright bizarre. We’ve rounded up some of the most outlandish, eccentric, and unconventional fighting games to ever be released.

We’ve only picked games that have had official releases, so, as crazy as they may be, fan-made projects like M.U.G.E.N. don’t qualify. Not all of these titles are necessarily good, but they are the cream of the crop when it comes to the bizarre.

Ballz 3D wasn’t a very good game. It looked ugly, sounded atrocious, and had horrible controls. For most games, this alone would justify tossing it in the trash, but despite its issues, Ballz 3D is still weirdly charming. You have to respect any developer who would come up with a hair-brained idea like this. The game may not be sub-par, but can you really hate on a title whose tagline is “To be the champion, you gotta have Ballz”? I don’t think so.

Even the most bizarre entries on this list feature traditional, human(oid) fighters, but BCV: Battle Construction Vehicles shakes things up by having combatants do battle inside of, well, construction vehicles. This game was only released in Japan and Europe, but given how crappy it was, we should be thankful it never made it over to the states. This could have been somewhat of a cult classic if not for its unresponsive controls and pathetic graphics. A missed opportunity for sure.

It’s hard to believe that Midway, the same folks who brought us Mortal Kombat, released this turd of a fighter. It didn’t play well and it certainly didn’t look pretty. The game is mostly on this list because of its hokey premise of a future, civil war-ravaged United States (called Neo-America) where disputes between territories are settled in fighting tournaments. Perhaps we should follow the example set in Bio F.R.E.A.K.S. and have our current presidential candidates outfitted with bionic implants and have them fight to the death. Or maybe not. Just an idea.

The hilariously over-the-top Cho Aniki series is mostly comprised of shoot ‘em up games in the vein of Gradius and R-Type, but the franchise dipped its oily, musclebound toes into the fighting game genre with this entry. All of the hypersexualization and insane humor that made the core series so popular in Japan remains intact with this fighter. This may be one of the weirdest and most uncomfortable experiences one could have playing a fighting game, but that is also part of the alure.

Clayfighter was marketed as an alternative to hyper violent games like Mortal Kombat and Street Fighter II. The developers wanted it to have the same intense action of those titles, but with a decidedly comedic edge. Despite its weird premise of featuring a roster of clay combatants, this was actually a very innovative title at the time since all of the in-game graphics were created using stop motion animation. It was also a fairly competent fighter too, which is more than can be said about some of the other games on this list.

In most fighting games, players abuse the hell out of dive kick attacks. That’s why having a title centered completely on that mechanic may be one of the most genius things ever conceived. In Divekick, players can only dive or kick. You would think that having such a limited moveset would get boring fast, but the game is so silly that this simple gimmick keeps one’s attention for longer than expected. The fact that Divekick has a ton of inside jokes about fighting games and the fighting game community also make it great fun.

Primal Rage was unique because it had a roster full of dinosaurs, giant apes, and other monsters battling it out. Just like Clayfighter, this game featured stop motion animation, though the models were much more detailed here. Primal Rage was basically a Mortal Kombat clone since it had a ton of violence and brutal fatalities. The only thing that keeps this game from being a definitive classic is its odd control scheme that had players holding down buttons while making movements on the joystick. Control quirks aside, this is one of the coolest and most bizarre games of the era.

If you thought Shaq-Fu wouldn’t make it on this list then you were sorely mistaken. Shaquille O’Neal was one of the biggest NBA stars of the 90’s (both in fame and physical stature) who also just so happened to be a fan of fighting games. While having Shaq star in a fighter may have made sense at the time, the actual game itself was a mediocre brawler at best. O’Neal was the only recognizable person in the roster, with the rest consisting of derivative and uninspired characters. We love Shaq, but there is a reason why Shaq-Fu is often considered one of the worst games released.

In the 90’s the Sonic the Hedgehog franchise was at its peak, but that didn't stop it from having a stinker or two see the light of day. Enter Sonic the Fighters, a stripped down version of Virtua Fighter without any of the depth or fun. The roster had recognizable characters like Sonic (naturally), Tails, and Knuckles. Then there were lesser known ones like Fang the Sniper, Bean the Dynamite, Bark the Bear, and… I’m losing you, aren’t I? The game saw limited release in arcades and didn’t make it to home systems until ten years afterwards. Thankfully, it wasn’t long before Nintendo showed the world how to do a proper ensemble mascot brawler with its Smash Bros. series.

Tongue of the Fat Man

Tongue of the Fatman is considered to be, not only one of the worst fighting games of all time, but one of the worst video games period. The titular Fat Man is so hideously disgusting that he makes the X-Men’s Mojo look like a swimsuit model. This was released before Street Fighter II standardized fighting game mechanics, meaning that its controls were an awful mess. If you've never played this game then consider yourself lucky.