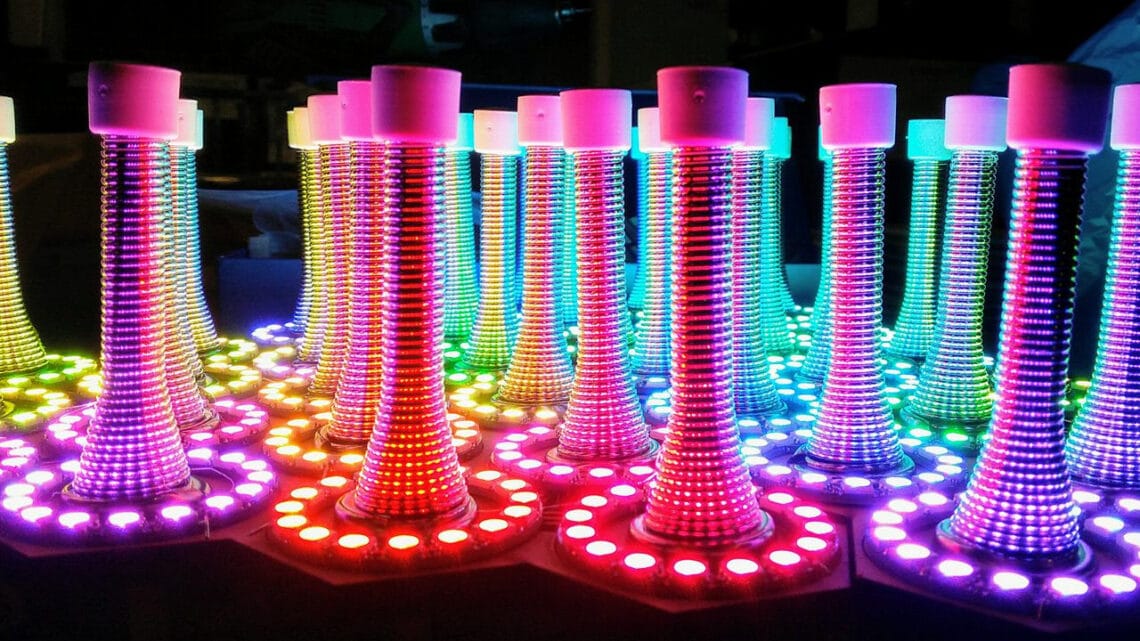 London Games Festival is an opportunity to see some wacky stuff, and in particular alternate possibilities for controls and hardware that just don’t suit your typical living room. I’ve previously written about the evolution of buttons and how, over many years, controller layouts from dualshock to joy-cons have become standardized under a common ‘language’. This is of course good for most gamers, as well as multi-platform developers, but standardization also comes at the expense of hardware diversity which, in itself, places limits on player expression.

Kicking off this year’s London Games Festival was Now Play This, a festival of experimental game design that attracts a general audience who, by and large, are not what we’d think of as hardcore gamers. A lot of the exhibits are specifically designed for a non-gaming audience and fitted with customized and stripped-back controls to this end: one example is ripping out all the superfluous buttons on a keyboard or Xbox controller, so players know that only what’s intact matters. Even then it’s interesting to observe how many players are shy of having a go on a controller with a few buttons, or just a joystick on an arcade cabinet. 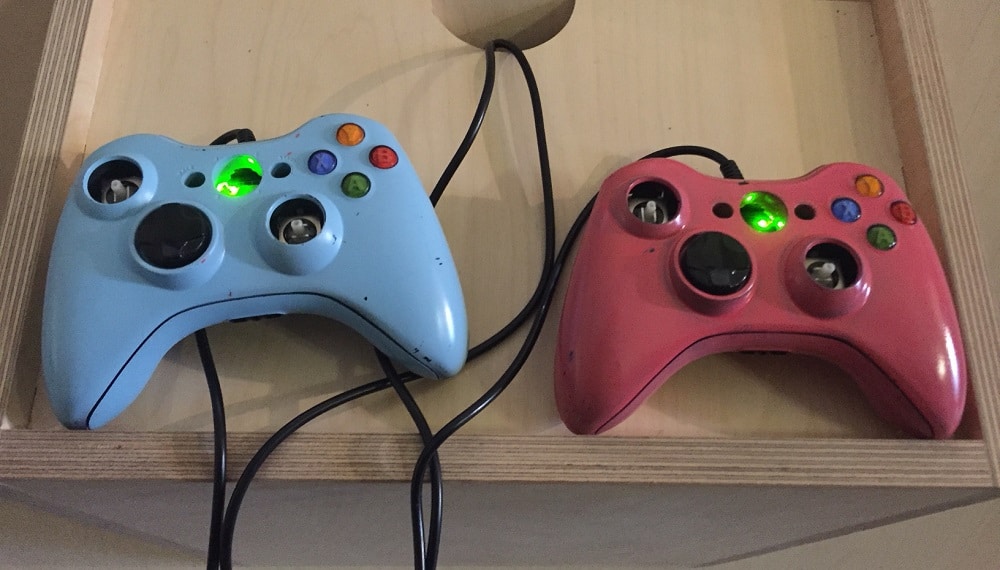 One of the Now Play This exhibits was a party game that strips back its control scheme to something much more simple, straddling the line between experimental and accessible. Dobotone is essentially a console created by Argentine developer Videogamo, which consists of Maximo Balestrini and Hernán Sáez. Having grown up around and been inspired by the arcade scene, Videogame’s first effort was a vertical-scrolling space shooter called NAVE, made as a single arcade cabinet playable with a joystick and one button. When played on Dobotone, however, NAVE jettisons the joystick altogether and has players hold a pair of button controllers gripped in each hand.

Playing each of the Dobotone console’s variety of Mario Party-type mini-games requires simply pressing, holding or outright mashing the remaining buttons, depending on the situation. The simplicity also means it’s pretty accommodating: you can press the buttons with your thumbs like a traditional gamepad, use your fingers in another grip, place the pad flat on the table, or indeed (as was suggested to me) turn them upside down and bash the buttons on a table. 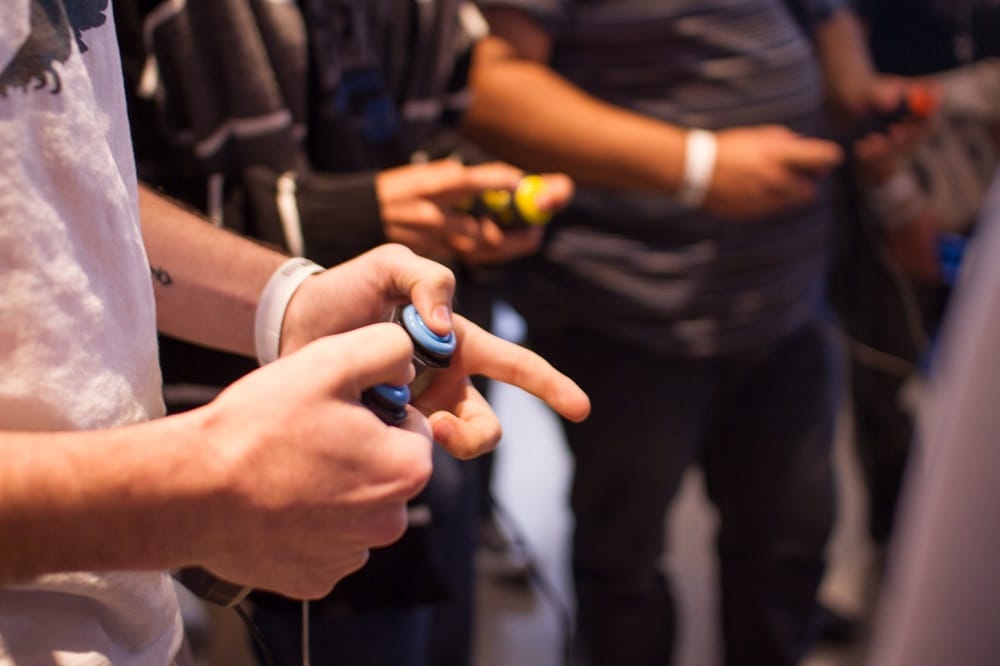 “After NAVE, there were spare buttons, other colors,” Sáez explains. “Maximo started fooling around with them, which was the start of just button controls. The hard thing about games is the joystick. Non-gamers don’t know what to do or they get nervous so two buttons is easy. There’s no other option. It wasn’t our intention to be accessible but it turned out that way.”

Of course, when you’re playing a party game in a pub setting where anyone can crowd around and have a go and get caught up in the mad antics onscreen, accessibility is a major attraction.

As you might notice from the above clip, the variety of four-player mini-games — ranging from a basic Smash Bros’ or Robot Wars battle, to changing lanes on a race track to avoid hazards, to filling a toilet with skeletons — is just one half of Dobotone. The other half is the machine itself, which has knobs a fifth player can fiddle with as a kind of Game Remixer, reminiscent of the Wii U multiplayer game Runbow where a ‘master’ player could use the gamepad to mess with environments. In the case of Dobotone, turning the knobs on the system can make the visuals glitchy, reduce the map size, zoom in or out, speed things up, change the laws of gravity or also simply change the music and sound effect volumes.

Having these knobs was originally a way of being able to set rules at the start of each game to make it easier or more challenging, but the idea of having a fifth disruptive player — or any bystander compelled to reach over and mess with the hardware — evolved over time. What both developers and players quickly realized is that the sensation of messing with a game is a great gameplay experience in itself.

“Knobs are cool!” laughs Sáez. “Your first communication you have with the game is the hardware, so we think that it’s important to have the right touch.”

Touch controls in games is nothing new, of course, but these games think about the concept in a different way. It’s especially original in Wobble Garden, a spring controller prototype designed by Robin Baumgarten. As the creator of Line Wobbler, best described as a one-dimensional dungeon crawler using a long LED strip and controlled with a springy joystick, his intent was to build a ‘spiritual successor’, which rather literally followed the model of having more of what came before — in this case, more springs and LEDs.

The individual spring controls are made from metal spring door stops fitted with a custom 3D-printed top that’s conductive and sensitive to even the lightest touch. Each of these has individually addressable LEDs at the base, as well as built-in vibration sensors. But though it looks gorgeous when it lights up, and the tactile feedback of the springs is just irresistible, what exactly is going on in Wobble Garden?

“Basically it’s intended as its own platform,” Baumgarten says. “I’m still experimenting [with] what it is, what it’s going to be. Right now, I’m showing a couple of games on it to see what works.”

The main demo Baumgarten describes as a “finger-walking game,” where you start on a spring highlighted in white and then touch adjacent springs to walk around, with the goal of ‘collecting’ green springs before a portal opens up to take you to the next level. Soon enough it introduces ‘hazards,’ where red flashes mimic moving lava, or other colors indicate enemies moving in a set pattern.

A bit of Wobble Garden by @Robin_B in action pic.twitter.com/jFDqoXJydi

It’s a novel introduction to what Wobble Garden can do, though this example doesn’t quite sate my overwhelming urge to flick those springs like crazy. There’s also a more ambient ‘fishpond’ experience where a light touch will attract ‘fish’ to swim towards you, but a flick will create waves on the controller making them swim away from you. It’s a relaxing and playful pleasure, though Baumgarten also has plans to design more traditional styles of mini-game for the platform, mentioning competitive ones like a ‘finger-twister’ game, or a three-player football game where you flick balls away to your opponent’s goals.

In its current state, Wobble Garden is a hexagon-shaped controller with 36 of these springs. On close inspection, the setup is also modular so it’s possible to expand or change the shape to whatever fits. Baumgarten especially wants the idea to evolve into a large installation piece that can cover a whole wall. It’s still in the early days of development, and folk aren’t short of ideas for where he could take it: some suggest it could be the basis for a rhythm game, while sound designers see it as a possible instrument or performative music toy (much like how you see live electronic musicians use a Midi fighter pad).

Baumgarten himself is open to Wobble Garden becoming a decentralized platform, as opposed to the more confined design of Line Wobbler (where the hardware is designed just for that game). “It’s an interesting intersection between tight videogames and interactive installations, and somewhere in-between,” says Baumgarten. “I kind of like this ambiguity.”

While Wobble Garden and Dobotone can be fairly described as experimental hardware, it’s worth thinking about what that means in the context of video game interfaces. In these cases, experimental also means more accessible to a curious general audience. If nothing else, by showing something unfamiliar to gamers and non-gamers alike, such hardware creates something of a level playing field.

“You can say it’s ‘experimental’ but actually, video games are originally like that,” says Sáez. “It’s about the hardware, having the best controller for the game you’re playing and not the ‘standard’ one, which is the case for the arcade. Even the Dreamcast, there were fishing rods, maracas, and Nintendo have also been experimental with that — it’s not the standard but that doesn’t mean it can’t be mainstream.”

Baumgarten believes accessibility also comes down to what the game asks of you. “If you show an unusual interface or hardware, maybe you have to compromise to have the game itself a bit simpler so people don’t get overwhelmed.” You can see that with how Line Wobbler, despite its appearance, is nonetheless a dungeon crawler with visible enemies and traps, while the demos available on Wobble Garden also follow a basic game formula.

Of course, as great as it to get a hands-on of experimental controls at small pub gatherings or festivals, the end of this month also sees the launch of Nintendo Labo, which is essentially packaging experimental hardware (OK, fine, cardboard) for the masses. Although we don’t yet know Nintendo’s plans and whether this technology will also be opened up to third-party developers, both Baumgarten and Videogamo are excited by its potential.

“I think it’s fantastic, especially because it’s geared toward the younger audience, so it’s kind of warming them up to the fact that they can build their own controllers,” says Baumgarten. “It can train a whole new generation of alternative controller designers, designing and developing different hardware components than just what’s provided, even if it’s just cardboard.”

While Dobotone is an expensive console that will only really find a home in venues that can draw in large crowds, it surprises me to discover a home release is also being considered — something like releasing on Steam, and allowing players to fit their own peripherals. Naturally, a Switch port now looks appealing too. “We love it,” laughs Balestrini. “It’s definitely a platform that’d be great to play with [and] we have to see what the possibilities are. Maybe there’ll be a Dobotone special in cardboard!”