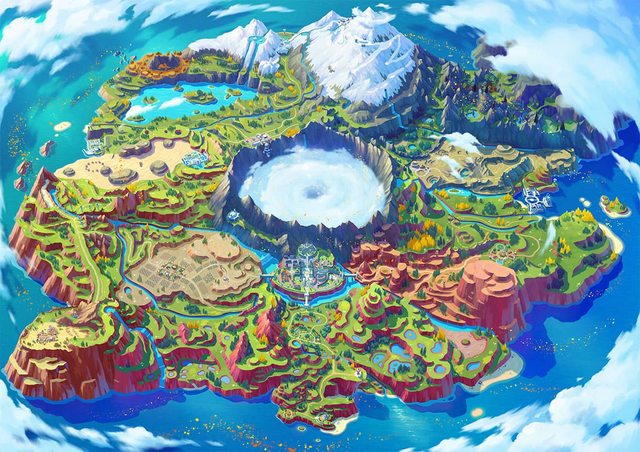 This fucking map has me more hyped for SV than ANY past Pokémon game.
I like how they drop the maps early on so people can speculate about them, and I also really like the style that the latest maps have been in, it’s very nice.
But unlike this map, SwSh’s map became way less interesting as soon as it became clear that most of it would be unexplorable (aside from the wild area), and the same can be said about earlier regions to a degree too, I could only get so excited because I knew the exploration would be limited to mostly linear routes, like always.
THIS time tho, knowing what we do about the games, for the first time ever it seems like more or less every single nook and cranny on the map is gonna be explorable in some way. And so now, looking over this map, I can’t help but be excited, REALLY excited even. Call me easy to please or a Standardless shill if you want, but honest to god the idea of having a massive seamless open world map to explore, with full sized cities and towns, loads of separate objectives scattered around the region, and Pokémon roaming and even interacting with their environment in the overworld, seemed so far off and unrealistic to me that it WAS my standard. But by fucking god they actually met it. I’m just in shock, guys, I really didn’t think they’d do it, but they did, so what choice do I have but to concede that gamefreak finally did good? Like am I crazy or is SV actually gonna be the game we’ve been saying they’ll never make for years now? Can I finally delete the my doomer wojak images?