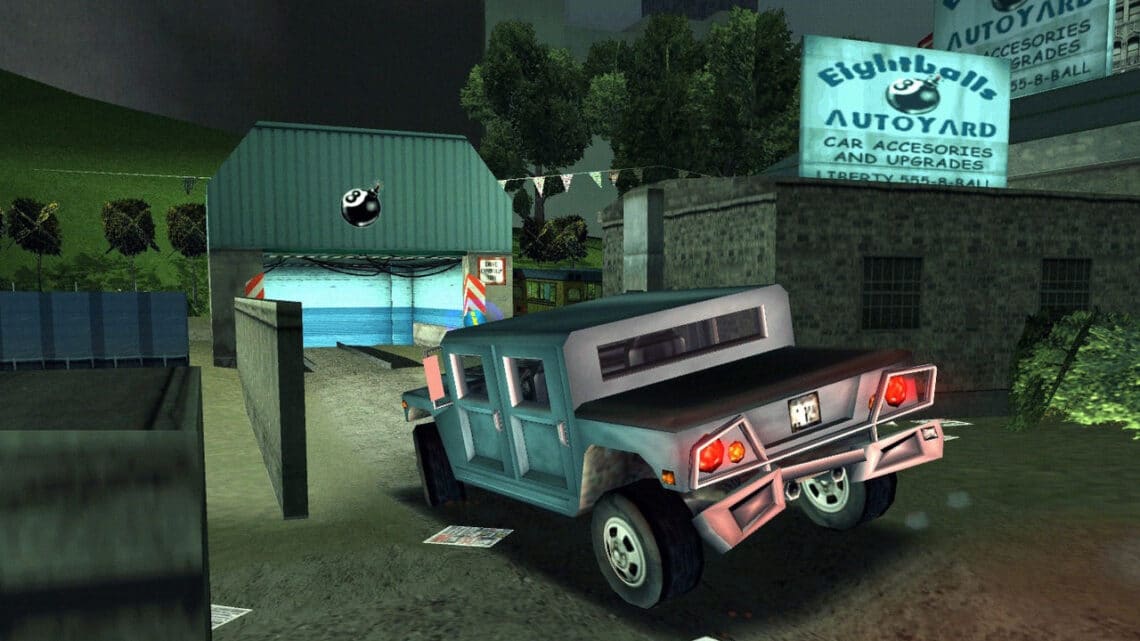 For more than ten years, from GTA III to GTA 4, we’ve been committing crimes in Liberty City, Vice City, and the state of San Andreas. Hundreds of missions, countless assassinations, heists, and untold stolen cars, bikes, copters, and planes. Time to look back and decide what, of that lot, was best.

With the expectation that the next GTA may still be a long way off, and Rockstar Games will read this, concluded that I know exactly what I’m talking about, and subsequently tailor it specifically to my tastes, here are my Top Ten Grand Theft Auto missions.

GTA 4’s conflicted, tortured protagonist Niko Bellic meets Gracie to supposedly buy her car. When she finds out she’s being kidnapped, all hell breaks loose. No, it’s not a five star wanted level. It’s an angry mob daughter pulling on the steering wheel and trying to scratch Niko’s eyes out. And, the language.

So, conflicted and tortured, Niko punches Grace in the face, knocks her the #@&% out. It’s a GTA mission with a difference, not a heist, not a beat the clock, or a car chase, but still crude, violent, wrong on so many levels, and funny as hell.

Talking of heists and car chases… While there is a major robbery as the centerpiece of most GTA games – Three Leaf Clover from GTA 4 being an especially good example – the best is the bank job in Vice City. But first you have to beat Hillary, Vice City’s best driver, a two star wanted rating, and a few annoying cops. And all you get is a bog standard Sentinel.

Flat out through the center of the city, no weapons, no short-cuts, your only chance is to nudge Hillary into a wall and then drive perfectly to the finish. It sounds simple, but it ain’t. It’ll take a lot of attempts, and a lot of luck. When you beat Hillary, you’ll stand up and cheer. But, you’ll never want to play the mission again.

If you think that ‘never wanting to play a mission again’ is a strange reason for putting a mission in a top ten list, how about liking a mission because of plot twists and character development.

Gang-banger CJ finds drug dealer Mike Toreno, who CJ thought he killed, is alive, and a member of the CIA (or worse). And Toreno wants CJ to work for them. With Cesar, CJ has to steal a truck. It’s a simple and fun mission. Ride fast over the Garver Bridge with Cesar on the back of the bike. Avoid the traffic, get close enough for Cesar to jump onto the truck. Then drive back to the garage.

A great, straightforward mission, a major plot twist and some quiet conversation between Cesar and CJ, some of my favorite bits in San Andreas. You just can’t underestimate plot and character when it comes to GTA.

Sometimes it’s not plot, character, or even hard racing that makes a good mission. Sometimes it’s a simple short-cut, and a joke at another game’s expense. When GTA III’s Claude has to take out the weird walking, but fast driving Tanner, you have two choices. You can drive after him, and chase him all over town, with a four star wanted level. Or, you can trigger the cut-scene, line up your bazooka, and blow him up before he’s out of second gear.

While we’re blowing stuff up: back in Vice City, Tommy needs to detonate a bomb in the mall. Unfortunately, the cops know there’s a bomb there, and they have the place locked down. So Tommy and Lance Vance steal a police car and a couple of uniforms, walk into the mall, and set off the bomb. Instant five-star wanted level.

In GTA there are five stars, and then there are five stars. In Copland there’s no armored car to jack, no tank, no helicopter stashed around the back of the building. It’s just you, whatever car’s closest, and every damn cop in the city, in a balls-out race back to your mansion.

Any mission the starts with ‘these pants are a bit tight in the crotch’ and ends with five thousand dollars delivered to your mansion door every day, sums up what GTA is all about.

This is where it gets complicated, because we’re not just talking The Ballad of Gay Tony, but The Lost and the Damned, and GTA 4 as well. It’s the messed-up exchange at the Libertorian where Niko, Johnny Klebitz, and Luis Lopez briefly come together over a small bag of stolen diamonds.

As you’d imagine, the population of Liberty City drops significantly.

Johnny gets the money, Luis gets the rocks, and Niko gets blamed for the whole deal going bad. It’s very cool, very GTA, but also surprising and satisfying. Especially when you’re playing TBGT, and you’re suddenly looking down on the scene from GTA 4. Luis starts the bloodshed, grabs the diamonds, climbs back to his helicopter on the roof, and – after a brief airborne battle – gets away clean.

In the San Andreas desert, CJ is also taking over the airways. Mike Toreno tells CJ to stop the rival government agency that is using the airfield. CJ grabs a dirt bike, drives into the cargo hold of a plane as it lifts off, kills a lot of agents, plants a bomb, and parachutes to safety as the planes explodes behind him.

Cinematic, iconic, thrilling; it’s a mission that’s been echoed in plenty of games since. But, the first time falling through the clouds and looking down on the amazing San Andreas map may be the greatest moment in gaming.

In Liberty City, Claude and 8-Ball have to take out the Cartel for their Mafia bosses. Claude gets the sniper rifle to cover 8-Ball as he plants explosives on a container ship docked in Portland Harbor.

It’s a classic GTA setup, with 8-Ball moving forward as you pick off enemies around him. But, once the mission is complete and the bomb goes off, you’re left with a broken, hulk of a ship, smoking in the harbor. From this moment nothing in a GTA game was safe. Businesses, building sites, tunnels, and whole city blocks. What was there today, one mission down the line, could be gone. It was awesome.

Not long after he returns to Los Santos, Big Smoke gets CJ to help with some business. When we’re talking GTA business, we’re talking running gun battles with the Russian mafia, high speed chases, instantly familiar settings, set-pieces stolen straight from the best movies, and frantic, violent, chaos. Just Business has it all.

CJ agrees to help his buddy, with no idea what’s in store for him. As soon as he walks into the Atrium, the shooting starts. Many dead Russians later, CJ and Smoke are on a bike racing down the Los Santos streets. Trucks, cars, bikes are being tossed around, exploding everywhere. Then it’s down the Los Santos sewers where we get the Terminator moment. The truck drives off the bridge, landing behind the escaping motorbike.

The rest of the chase, narrow escape, and the calm, quiet moment at the end when you’re just trying to catch your breath, simply sum up what a great GTA mission is all about. And it’s still at the beginning of San Andreas. It’s like a training mission!

If there is one thing most games try to do, it’s to end with a bang. GTA games have had some pretty good endings. In Vice City Stories, Vic Vance has had enough, so he takes a Hunter helicopter to settle all outstanding debts. This means destroying the top floors of a downtown high-rise.

GTA games are not afraid of getting big – like a helicopter raining death from above – and then getting personal. Vic lands, walks from the copter (just before it explodes), and takes his minigun on a rampage through the building that ends in the rooftop deaths of two of Vice City’s major scumbags.

While there are longer and tougher end missions, there’s nothing more satisfying then killing the guy who killed your girl.

What makes a great GTA mission? Maybe, its just those ones you remember, even if you haven’t played them for years. Let’s just hope that when if finally gets here, GTA V has a couple of mission worthy of appearing on this list.

Keep your Friends Close from Vice City did not make the list? Replicating the end of Scarface was awesome … plus I really enjoyed capping Lance!

No Three Leaf Clover from GTA IV?
Man that’s gotta be one of my favourite missions of all time, felt like I was playing ‘Heat’ the videogame.

I found the early games that went 3D very hard to play the missions. The camera and targeting system were very clunky, and I got killed many, many time. GTA:SA was my favourite thus far in the series.

The Driver had to be one of the hardest missions of any GTA.. You were pretty much reliant on him spinning out if you were lucky to get the advantage.

Espresso 2 Go IIRC I think I used a map/guide and it was still incredibly tight with the time.

San Andreas had it’s moments, especially some of the multi-part missions, but GTAIV was pretty easy. Only the motorbike missions annoyed me in that one.

The hardest final mission has to be Catalina, because you have a time restriction and start with no weapons. I think the only way I ever did it legit without cheats was on my 100% run where I had every spawn at the safehouse.. I ran down the hill, picked up the weapon spawns and the tank and took out Catalina’s goons that way…

I reckon TBOGT and GTA IV had the most enjoyable missions.

IMO, GTA III’s “Espresso-2-Go” was the hardest mission in the history of Grand Theft Auto (I’ve completed all GTA’s – except China Town Wars – since GTA III). I actually had to plan the fastest possible route and draw it on the map.