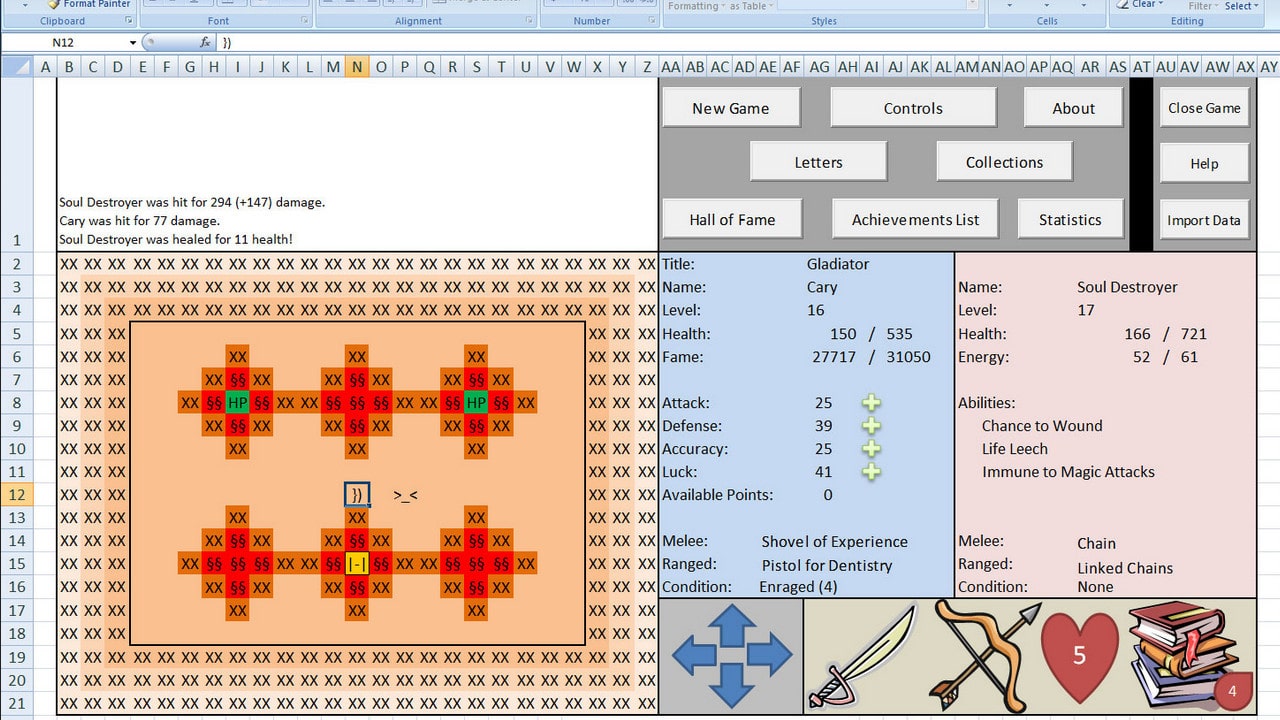 In the age of mega-powerful graphics cards that can push millions of pixels and render realistic 3D environments, is there any room for a simpler kind of role-playing game? Well, that depends on how simple you’re looking to go. Just because you’re stuck in Excel all day doesn’t mean you can’t do some questing. Arena.Xlsm is a role-playing game you can play in Microsoft Excel, and it works better than you would expect.

Arena.Xlsm is a project by accountant and MBA Candidate Cary Walkin. The game is really just a step above text-based, with a small arena for combat that is 14 x 19 cells in size. To the right of the arena are your character’s stats, movement controls, and action buttons. There is also a panel that tells you what kind of monster you’re currently facing down. This is important because all the beasts you slay in Arena.Xlsm are represented by punctuation marks. I know that looks like two brackets sliding across the screen, but it’s actually a scary dragon.

You’ve got ranged attacks, melee, and magic spells at your disposal. It’s actually quite surprising how in-depth this game is for something that runs entirely inside Excel. There are item drops, experience points, character levels, and adjustable stats. You’ll even encounter boss battles every few levels. Many of the variables for items and creatures are randomly generated, so each playthrough is a little different.

Arena.Xlsm can be downloaded for free, and is just under 1MB in size. It’s protected, so you can’t go around modifying the game yourself. It has been tested in Excel 2007 and 2010 on Windows. Walkin suggests Microsoft Office 2013 should work fine, but this hasn’t been confirmed yet. This game will not, however, run on a Mac. Even when it’s only an Excel-based RPG, the Mac just isn’t good for gaming. Bummer.