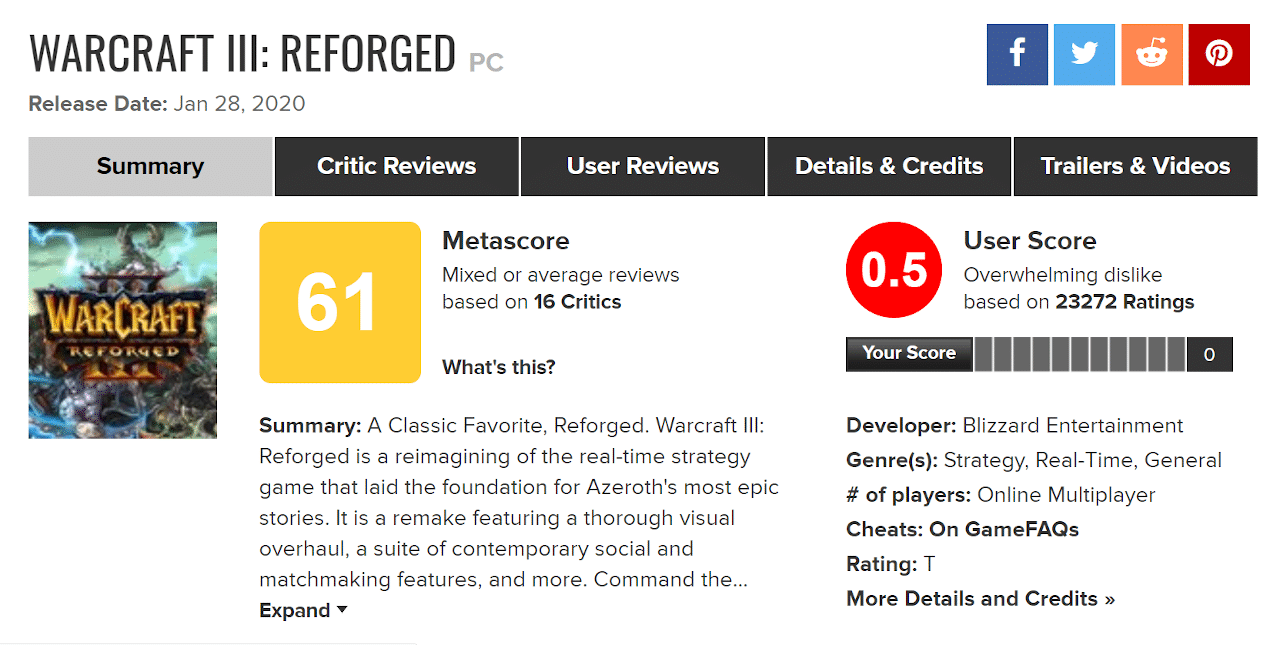 Blizzard used to be synonymous with addicting and highly polished games, and had Midas’ golden touch for anything to do with entertainment. Now it seems as if the company is almost intentionally trying to show us just how much they just don’t give a shit.

The recent launch of Warcraft III: Reforged is just the latest demonstration of the fact. The only reason this controversy has blown up at all is because it’s a remaster of a cherished classic game that was made back when Blizzard still had people with a passion for video games.

Media outlets like Newsweek — while acknowledging the sorry state of the game at launch — are refusing to admit that there is now something inherently wrong with Blizzard or even with Warcraft III: Reforged itself. Time will fix it all, don’t worry, don’t be so entitled. They’re missing the point.

I've been trying to figure out why the main menu performance on Warcraft 3 Reforged is so bad.

And then there’s the missing features.

>Added a latency indicator in the Custom Game list but it’s just 3 ambiguous bars
>Arthas vs Illidan cutscene looks like cheap fanmade youtube garbage
>Can no longer have more than 1 account – You use your Battle.net tag
>Can no longer join a private game by typing the lobby name
>Can only filter by lobby name and not map name
>Can’t block/ignore spammers in any chat
>Classic account friend lists were deleted without warning
>Custom game list is no longer global – you can’t play custom games with people from other regions
>Cut all the new english voice acting
>Cut all the promised new cutscenes and still advertises them on their website
>Cut promised new story content
>Menu is awful and unfinished with a chat box that often doesn’t auto scroll
>Menus use Chromium in two bloated BlizzardBrowser.exe background processes that use as much memory&CPU as the game process
>Naga Sea Witch hero model has human ears
>New battlenet terms of service killed customs. No more copyright material.
>New foreign dubs which are inferior and compulsory, can NOT be changed back
>No clans
>No custom keybinds
>No MMR system
>No more built-in tournament functionality
>No more cross-chat with other battle.net 1.0 games
>No more custom campaign functionality yet the functionality to create them is still in the editor
>No more LAN functionality
>No more offline games versus the AI
>No more Reign of Chaos balance for the Reign of Chaos campaign
>No more The Frozen Throne menu screen
>No profiles
>People who didn’t buy reforged are still forced to download ~20GB of reforged assets
>PTR builds work for singleplayer but don’t have LAN functionality.
>Reforged is an objective downgrade with many features/story material removed.
>Removed custom game filter
>Removed friend list
>Removed most of the chat /commands
>Removed the Dryad’s “I’m so wasted” voice line among others
>TFT client now gone. You need to use Reforged to play.
>The end of match summary is completely butchered and doesn’t tell you useful info
>There is no indication of a player’s ping at all unlike in Classic
>You can now report maps, lobbies and other players for being offensive

It has also been described, as here by The Quartering, as one of the biggest bait and switches in video gaming history.

All of this for a game that is not supposed to be in early access and for which Blizzard is charging full price.

Gamers are no longer giving Blizzard a pass, and are reviewing it horribly across the board. The Metacritic user score of the game is now at 0.5, with 22,659 ratings. The state of this turd is so bad that even video game reviewers decided they have no choice but to side with the people, giving it a Metascore of 61.

Yes, Reforged probably will get better — it has to when starting from what can only be described as the bottom. But how much better can it get if they dared to release a game this broken and this different from what was originally previewed?

Also keep in mind that we have several recent foreboding examples of the “it will get fixed post launch” narrative — like Crackdown 3, Fallout 76, and Anthem. These are games of a much bigger scope and budget, and they’re still not getting noticeably better over time. I know Warcraft III: Reforged is a much smaller game and that maybe, just maybe, it will become a great game somewhere down the line. But why demand full price for it in this state and not when the game is fully baked?

Players buying Warcraft III: Reforged are well within their rights to review it at launch, or even demand a refund — and the usual suspects better not cook up another one of the corporate “that’s sexism” campaigns over it.

1 thought on “<span class="entry-title-primary">Warcraft III: Reforged is yet more proof Blizzard’s not the company it once was</span> <span class="entry-subtitle">User score: 0.5. Beyond the visual downgrades, visual glitches, stutters, crashes, missing features, and connectivity issues, Blizzard now has a total disconnect with its audience.</span>”