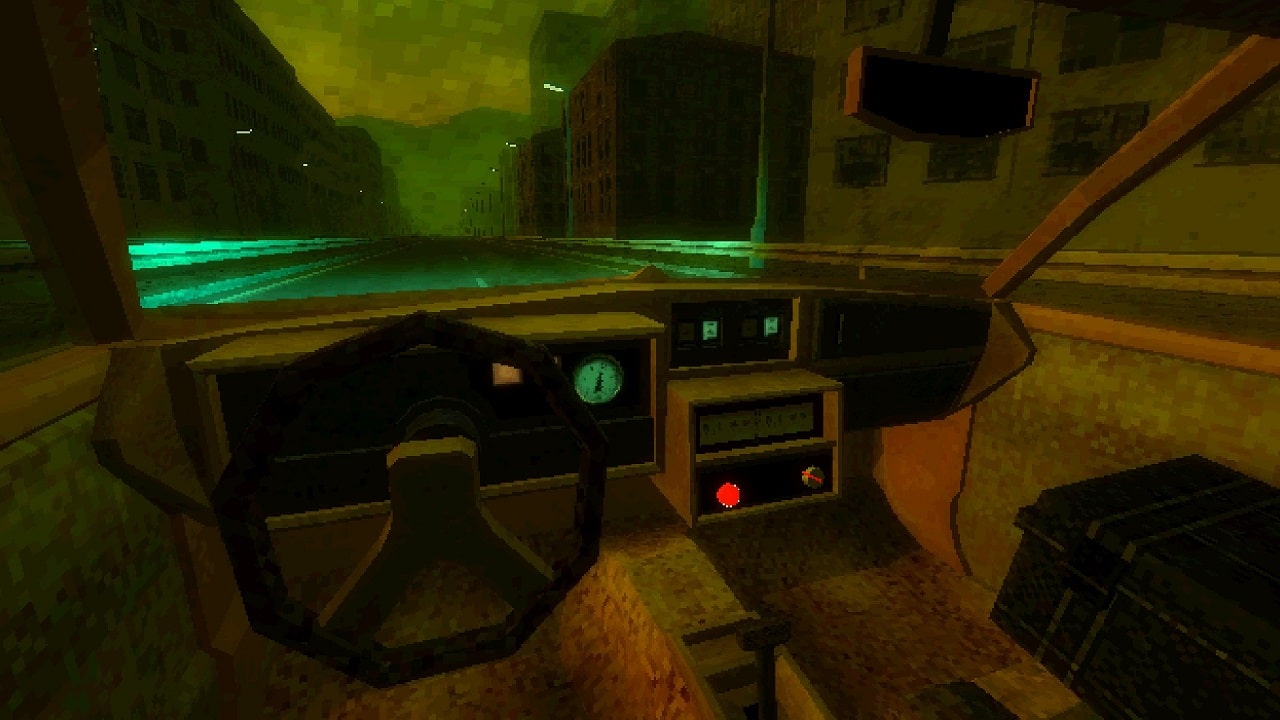 With the release of Capcom’s hyper-realistic remake of Resident Evil 2, the most 1998 of all nightmares has been updated into sterling HD.

But last year, the most impressive horrors looked to 1998 not as a rough draft to be improved upon, but as something potent and terrifying in and of itself.

With Paratopic, OK/NORMAL, September 1999 and DUSK gathered ‘round the pre-rendered ouija board, the ghosts of John Romero and Keiichiro Toyama were summoned, rumbling into video games like fatty pink cacodemons to haunt the low-lit corridors their works helped inspire.

Each descendant offers a different kind of scare. Paratopic, Arbitrary Metric’s lauded walking sim with a color palette that ranges from pea soup to french onion, ladles out low-poly unease and a cryptic first-person narrative. OK/NORMAL is a kaleidoscopic fever dream along freely floating paths. September 1999 is a found-footage game — imagine The Blair Witch Project as a short film with light interactivity. And DUSK is a spooky shooter, of which developer David Szymanski said, “if you can think of an FPS from around Doom‘s release to the turn of the century, it probably influenced DUSK in some way.”

What they all have in common is an aesthetic and, in some cases, design sensibility, that owes as much to the the era of tank controls and wonky cameras as they do to the current age of AAA polish and indie experimentation. They belong to both eras, and neither; occupants of the uncanny valley at a time when a tried-and-true suspension (of disbelief) bridge stretches above it. But something they all seem to suggest is that, maybe, the uncanny valley shouldn’t be bridged.

After all, it can be a terribly unsettling place.

Fear in Your Eyes

For these developers, lo-fi aesthetics offer the most direct path to the player’s imagination.

“Low-poly low-res visuals make everything look gritty, abstract, and unsettling,” says DUSK’s Szymanski. “They don’t let you get a good look at things and they lend themselves to decaying, ugly environments.  I think recently a lot of devs have begun to realize that, and/or they feel more comfortable giving that look a go since other games have tried it and done well.”

“I’d say it’s less about the time period itself, and more about the primitive 3D graphics, and generally more limited understanding of video games at the time. You were playing in these barren, primitive, 3D environments, and you weren’t quite sure what games are actually capable of. The low-definition graphics got your imagination really racing in a way modern games don’t. You saw a monster in a game, and most of the time you had no idea what the monster really looked like [here’s an interview where Kortelahti recalls the blurry horror of seeing one of RE2’s lickers for the first time]. You just saw the shape, and that the monster is horribly deformed. Your imagination then filled in the gaps, and what’s scarier that the stuff in your own head?”

That’s an old horror axiom – the unseen monster, the one in your head, will always be scarier than the one on screen. But, these games seem to be asking, what if even when we see the monster, it remains pixelated, fuzzy, unclear? What if we see it in the crackly black-and-white of a VHS tape, or on the bubbled monitor of a CRT, or running through the 32-bit processor of a PS1?

The same is true for the compressed soundscapes of ‘90s-era games.

“Sound-wise they had to get creative due to data size limits on floppy and CD, so a lot of sounds end up really truncated and hard to identify, which is a big mood,” said Chris Brown, aka ‘Beau Chaotica’, who worked on sound design for Paratopic and produced a similarly eerie soundwork. Brown described the garbled voice work featured in the game as “somewhere between Simlish and SHODAN.”

Of course, as much as the choice to emulate early 3D’s look and sound is influenced by creative direction, practical concerns also factor in.

“What if I told you it wasn’t the 90s?” says Paratopic’s writer, Doc Burford. “What I mean is, we’ve seen these indie waves; people trying to make their own things inspired largely by 8-bit and 16-bit games. Indie design is often retro because it’s affordable. With the advent of Unity and Unreal 4’s simplified pipelines, making games is more accessible than ever before. It makes sense that people might want to start making horror games.”

Burford also points out, however, that the pixel art aesthetics associated with indie platformers don’t translate well to horror.

“I think horror is most interesting when it’s 3D. I feel nothing, absolutely nothing, playing 2D horror pixel art games or reading most horror text games (shout out to “my father’s long, long legs” for being the sole exception). I think horror needs a reality to it, and I think the fifth generation is where that technology could finally get players really feeling that sense of dread. I have a specific, personal affection for that era of visual design, but I suspect we’re seeing this boom more because it’s a sort of minimum viable product for 3D horror.”

So, Paratopic, OK/NORMAL, September 1999 and DUSK live at the three-way intersection of creativity, nostalgia and practicality. But, there’s another reason that the ‘90s inspire horror; a feeling of transition that infused the era; maybe only that era.

Embryos of the Future

For Jessica Harvey, one of the developers of Paratopic at Arbitrary Metric, the ‘90s are most unsettling as a sketchy prediction of what was to come; a barely functioning prototype of the aughts and twenty-teens.

“In retrospect, the ‘90s are discernable as a threshold period. A space between worlds. Most pertinently, the beginning of cybernetics (both technological and controlled-systematic) enveloping society. Flawed, embryonic renditions of current-modern technologies and their accompanying stillborn ideas,” Harvey writes.

“A lot of games do a good job of embodying this. Not just the jankiness of their pre-GPU 3D, but in how elements we now take for granted felt quite wrong. How character controls felt, how basic interfacing was executed, how AI behaved. The utter abstraction within many pieces of level design.”

It was a decade of change. Power in American politics transferred from a Republican party that had held the executive branch for a dozen years to a young Democratic upstart from Arkansas. The Internet began to take on a life of its own. We didn’t live online in the way we do now, but we took daily expeditions into chatrooms and early clip-arty websites. Most importantly for our considerations here, 3D graphics took their first unsteady steps before defining the look of the games medium for the decades that followed.

Harvey notes that the 90s was an era dominated by new technologies but also a feeling of hope for the future: now we’ve got plenty of the former, and not so much of the latter.

“The ‘90s were a fleeting, ephemeral time. A brief blossoming of hope from the Thatcherite rubble behind it, a bloom that quickly rotted away and has not and will not be seen again. Yes, that positivity was highly localized and deeply shallow, but nonetheless for those who saw it a strong feeling resonates from things lost that will never be regained.”

“Those feelings of hope feed the technological exploration of the era. It is a time period full of things that could have been, points where time and progress could have visibly branched. All that shit is terribly haunted and, with the visuals in particular, I really tried to bridge us into that.”

Maybe then, that’s what these games are: haunted. While throwback Metroidvanias often aim to evoke the joy of childhood, these horror games are built with the assumption that this era and its simple happiness is long gone. Nostalgia, then, is it’s own kind of horror; one where we long for the ghosts to appear, for the corpses to rise from their graves.

They’re dead and gone. That’s the scare. You can remember, but you can never go back.