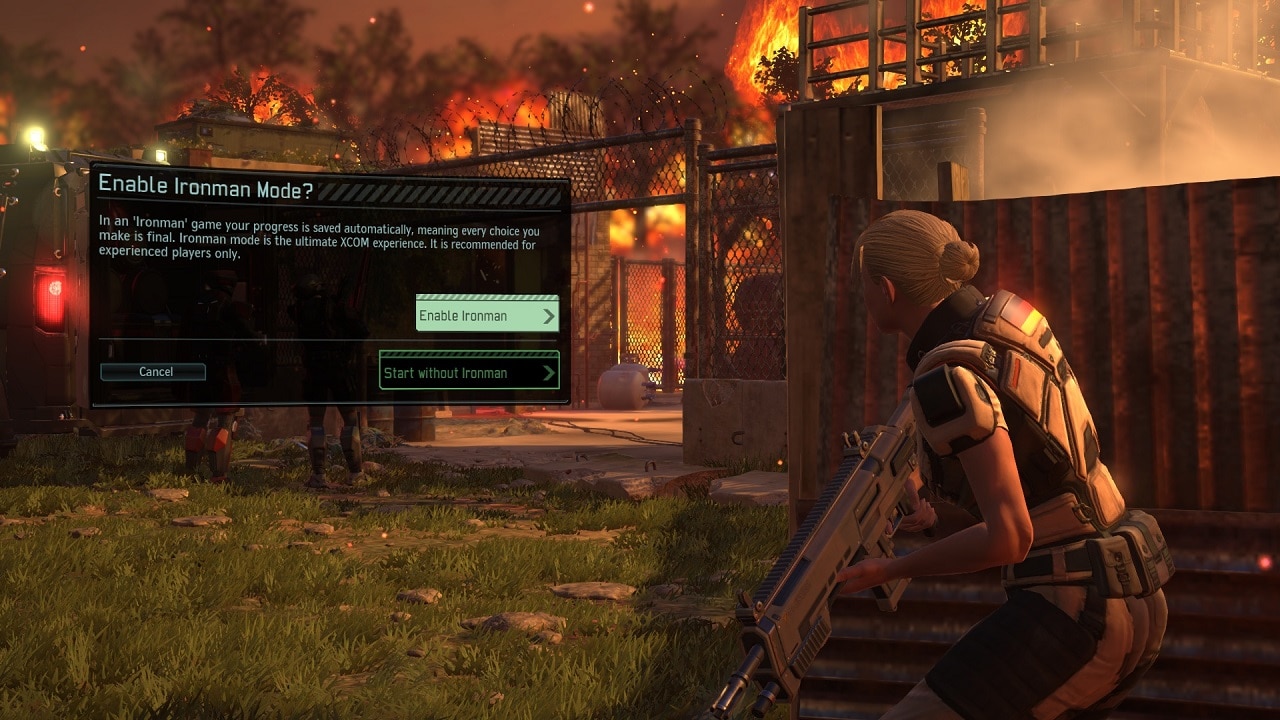 When video games aren't forcing us into madness and prompting premature gray hairs to sprout all over our glorious heads of hair, they're not hard enough. If you haven't sent a controller hurtling through the air straight into the middle of your flat screen TV, you aren't being challenged enough.

Okay, we're exaggerating just a bit, but it's easy to tell when you're not able to live up to your full potential, and it's human nature to keep pushing and keep seeking out greatness. It's also an understandable practice to get as much mileage out of the game you likely spent $60 or more on as is humanly possible -- thus, the concept of establishing player-initiated rules and augments to amplify the standard difficulty of any given game.

Whether this is accomplished via purposefully traipsing through an RPG without ever leveling up or treating every in-game death as a permanent one, we'll always find a way to make things tougher on ourselves. There's only a few hundred ways out there to ensure proper punishment is inflicted, as we all know the gamer community is rife with some of the most ridiculously creative souls out there, but we've chosen a few that stand out to as especially brutal concepts.

We think we'll stick to "Insane" or "Nightmare" modes instead, but for the brave souls around who need a little more substantial spike in difficulty to satisfy that savage spirit within, here are some of the best ways we make our games harder.

When you die in a game, you simply come back "fighting fit," if Nurse Joy at the Pokémon Center is to be believed. Whether you respawn at a checkpoint or you pull up a previous save, there's no real penalty for failure save for lost XP, items, and hours logged. You can continue your adventure from where you left off, and all is right with the world.

The trend of treating every death as a final one ensures that you’ll make every single move count. DayZ is implementing this mechanic famously, making players equal parts frustrated and overly cautious, but it's a game mechanic that can be applied to pretty much any title you feel like kicking things up a notch with. Diablo II and Diablo III also make use of the extremely difficult gaming "lifestyle," and you also see it in various RPGs, MMOs, and a wealth of other titles, notably Fire Emblem.

Player-inflicted permadeath must be enforced by the gamer themselves, but it's a legitimately difficult way to increase how significant every in-game action is -- do you really want to chance taking on a monster three times your level, or is it more beneficial for you to turn tail and run? In a way, the game takes on a more realistic persona, and in turn completion feels like much more of an accomplishment.

Throwing caution to the wind and blazing through a game like you know it like the back of your hand is, in a nutshell, a speed run. In order to perform a run competently, one must at the very least be reasonably comfortable with core mechanics, tricks, and shortcuts at their disposal, and available routes that may be utilized in order to achieve the fastest time possible. Cut scenes will be skipped if there is the opportunity to do so, and in some cases other player-imposed prerequisites will be in effect to make the run even more impressive. There's no room for mistakes, and timing must be absolute.

Platformers and other control-intensive titles where it's integral to clear specific jumps or other obstacles that demand pinpoint accuracy, so if you falter even once you may not be able to regain the precious seconds lost -- especially if you're making an attempt for the record books. Not all speed runs are intended for completion, however. Some are attempted in an effort to max out a possible level or game score, and others still are planned with "sequence breaking," which includes obtaining key items out of order or skipping them entirely. There are tons of ways to ensure speed runs stay difficult, and there's an entire community dedicated to tracking and recording these admirable attempts should you choose to share your efforts with the world.

RPGs are all about the grind. It's a well-known fact that if you try and topple the Midgar Zolom of Final Fantasy VII, tempting fate by running into the swamplands without a chocobo to ride before leveling to an acceptable point, you're gonna have a bad time -- unless you've got some mad skills. In that case, come and help us out. We kid, but it's an impressive feat to be able to clear an entire RPG with lower levels than are adequate for boss encounters and even mid-range monsters.

The entire point is for you to skip experience that may be gained through normal play so that even random encounters are a challenge. Low-level equipment, weapons, and other augments should be opted for, and any spells or power-ups that may be used to help players gain levels or other abilities that could be seen as a boon. Obviously this cannot be done in many RPGs, as leveling up is absolutely required, but in many you can find ways through the narrative by relying on impeccable timing or other stats rather than brute strength alone. It's not for the faint of heart, but then which of these methods actually are? This difficulty change-up is a great way to make a tired old RPG adventure feel brand new again.

Once you've mastered your favorite game using one character at a time like the rest of us, less-skilled players do, it's time to go the next level -- double plays. If the game has become a cakewalk using one player-controlled character, add another to the mix for a surefire difficulty multiplier.

Rhythm games and side-scrolling shooters are excellent to apply this modification to, especially games where multiplayer cooperation is required or strongly encouraged -- imagine Ikaruga with both ships controlled by one player. It's been done, and spectacularly so. This technique is also seen quite often in light-gun games where one may dual-wield both controllers and play both roles, but it's easy adapted to other games as well. The skills and coordination involved, especially with some of the already nefariously difficult games out there are astronomical, and if you're not one to be frustrated easily, this might be a self-imposed challenge that's right for you.

Like those mad souls who brave Dark Souls with no armor, shield, ranged weapons, or magic, you too can create your own brand of "naked runs," which call for participants to complete a campaign using only minimal or no equipment, or default and low-level tools. Where low-level runs allowed you no external help as far as experience and stat boosts, these daunting challenges ask you to forgo armor, weapons, and anything else that might soften the blow of oncoming enemies or even the environment.

Is it impossible? It feels pretty close to it for those of us who need as much help as possible conquering harder difficulties with buffs and other helpful tools. If you want to prove your worth, stepping down to the bare minimum might be your alley.

What say you, adventurers? Are you keen to take on one or more of these indomitable challenge modes, or do you have the guts? Hey, we never said we did -- that's all you, stud! Get out there and test your might, and then tell us what kinds of ways you're implementing to frustrate yourself beyond belief.