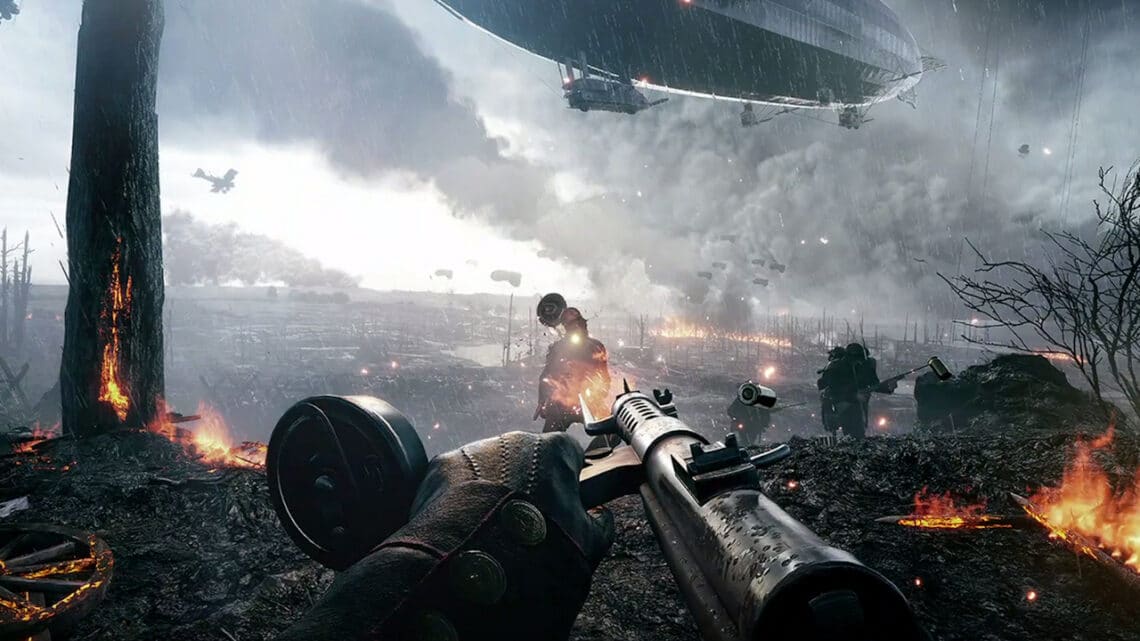 The new trailer for Battlefield 1 (the counterintuitive sequel to Battlefield 4) was released this week to overwhelmingly positive reviews. It was so well liked, in fact, that it garnered the distinction of being the most popular trailer in YouTube history.

But while players were stoked for a game set in World War 1, a setting rarely touched by the genre, culture critics in the media and on Twitter found it in poor taste. After decades of ultra-violent video games depicting all sorts of travesties, apparently WW1 is the line in the sand for some critics.

Guardian writer Alex Hern asks if it’s wrong to set a war game in the trenches of WW1, before answering it with an implied yes. “Asking whether the first world war is an appropriate topic for a first-person shooter may reveal a more pressing question: why do we think any war is?” Hern says.

“A game set in the Great War will necessarily whitewash the horrors of trench warfare. Even when games do tenderly address these subjects, they rarely do so through the medium of 64v64 class-based combat.”

Hern seems to let on that he does not actually like war games, a genre people usually play not to learn the nuances of war but for entertainment. Yes, it will be impossible to realistically portray trench warfare in a multiplayer game. There’s not the player density to pin each side down in their trench, with certain death for those stuck in no man’s land. The players will not be able to organize coordinated charges without a leadership structure. Twenty-minute match times aren’t enough to develop trench foot.

But that doesn’t mean some version of the war should not be translated into a game.

While Battlefield 1 will partially take place in the trenches, its developers made a point to include many variant fronts in the war. The Italian Alps, Arabian deserts and the forests of the Eastern Front will lend themselves better to the fast pace of multiplayer.

Wired’s Jake Muncy had similar reservations. “This might sound like an exciting new frontier for the genre, but there’s a reason WW1 has long been no-man’s land for developers: It was a quagmire of death and disease that turned strategy into slaughter, with no handy narrative of heroism to layer gameplay atop.”

Where was Muncy during the launch of the thousands of Vietnam games? While the carnage and death tolls of the two wars don’t compare, it’s not the first time games have been set in pointlessly destructive wars. Besides World War 2, most modern wars were quagmires. We didn’t see people tiptoeing around video game depictions of the Iraq and Afghanistan wars.

Probably the most naval-gazing criticism came from radical SJW Jonathan McIntosh. You may know him as the guy who led a Twitter mob after Joss Whedon, causing the director to quit Twitter for the crime of putting a Black Widow-Hulk love plot in Avengers 2.

Everything about WW1 was horrific, brutal and tragic. The video game industry sees that and thinks “Perfect for a fun digital playground!"

“Everybody about WW1 was horrific, brutal and tragic,” he writes. But that’s true of most wars. So is hell for that matter, the setting for the popular Doom franchise. That does not mean it won’t make a good video game.

In a long Twitter screed, McIntosh even parroted ’90s fears of violent video games leading to real life violence. He took an argument straight from Jack Thompson, a Florida lawyer who spent his career in a losing battle against “amoral” video games until he was disbarred for misconduct.

McIntosh instead would like players to play as a harmless medic, committing treason to help save enemy soldiers.

A video game where you play as a medic in WW1 trying to save lives (on both sides) as shells fall and gas fills the trenches around you.

The problem with these critics assumptions about Battlefield 1 is they treat a game as some definitive source of knowledge regarding the war. Obviously it won’t perfectly capture how terrible it felt to be bombed to hell inside a trench just like FIFA doesn’t teach you how it feels to win a World Cup.

If I want to learn about the war, I’ll watch a Ken Burns documentary. If I want to dogfight in biplanes, flamethrower some Germans and run over people in antiquated tanks, I’ll play me some Battlefield 1.