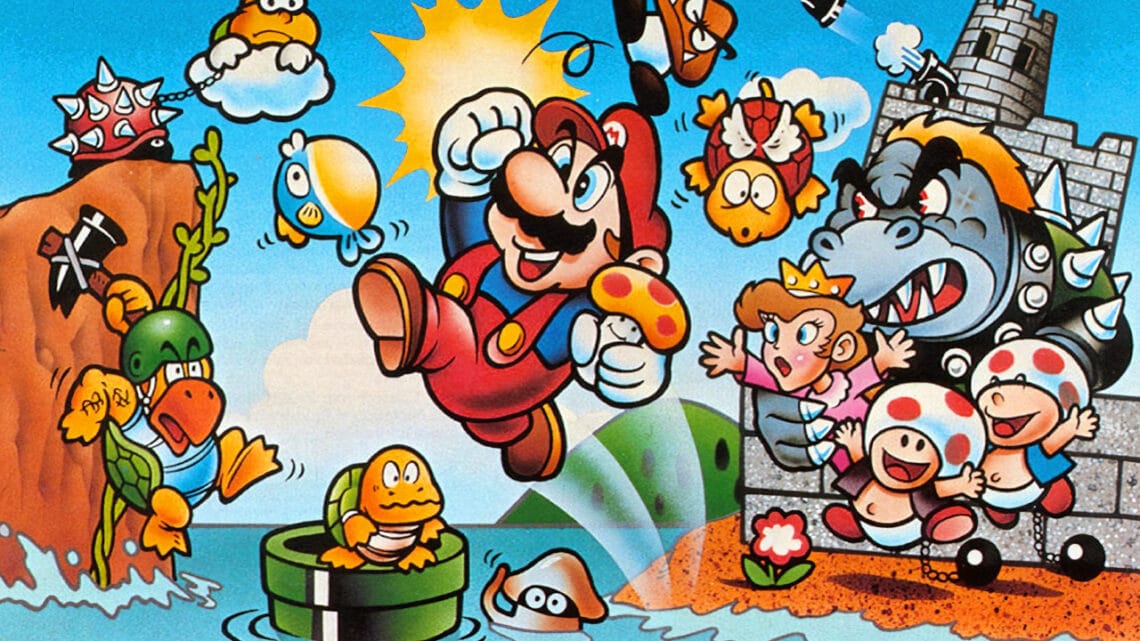 Talking about Super Mario Bros. 3 risks devolving into a numbers game. It sold over eighteen million copies worldwide, another million on its Virtual Console re-release, who knows how many if you include pack-ins/re-releases, and still stands as one of the biggest sellers ever twenty-seven years later. Released in Japan on October 23, 1988, it wouldn’t see America till 1990 or Europe till 1991, but Super Mario Bros. 3 was always white-hot. In Nintendo’s western television advert, thousands of children chant ‘Mario, Mario, Mario’ as the camera pans back, the figures morphing into Mario’s face and then the North American continent. Such was the anticipation and profile for this 8-bit platformer it led to author David Sheff’s famous assertion that Mario was more recognizable than Mickey Mouse and the then-president George Bush Snr.

The third numbered Mario Bros. would be the last proper Mario game for the NES, and a launching pad for all subsequent 2D platformers. It was a farewell to the hardware that had established Nintendo as one of the videogame industry’s big players, directed by the man whose games had been the driving force behind that success. There was a good chance that after this Shigeru Miyamoto, Takashi Tezuka, and their crack team of coding ninjas would never again have such a captive audience – or more guaranteed sales.

The most striking aspect of SMB3, with hindsight, is that it is a work of conscious artifice: the very first thing you see is a curtain rising, as in a theatre, to show the title screen. An impromtu comedy routine plays out between the Bros., a little hint of the Three Stooges, that ends with Mario getting bopped on the head and chasing Luigi off-screen. The levels themselves are constructed like theatrical stages: blocks that seem bolted onto the background, platforms suspended by jerry-rigged ropes that attach to an unseen ceiling, and they don’t fade to black so much as just stop. The set ends. Another theatrical trick – mechanized platforms operated from behind the scenes – is the setup for levels that play out along a fixed route. How does Mario power-up? He puts on costumes. 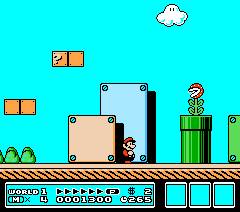 And it’s one hell of a performance. SMB3 was and is synonymous with the Raccoon suit, the Big Daddy of power-ups: this lets Mario swipe enemies with his tail, slow his landings, and most importantly of all, fly way up in the sky. Taking off feels, even now, like breaking free. The delicious kink in the controls is not the flying itself, but that it requires a run-up before take-off – a brilliant link to Mario’s traditional abilities, and a tactical layer that prevents a potentially-overpowered ability from being spammed.

There was a real sense of joy to these costumes – things made not just for function, but for fun. The Tanuki suit is basically the Racoon suit, but can turn into a statue that can’t be hit. The two layers of the Frog suit, a hoppy hindrance on land but in the water grants full directional movement control and makes swimming challenges deliciously simple. The Hammer suit lets you turn the tables on the Hammer Bros., the P-Wing gives you the Raccoon suit with infinite flight for one stage (a Shigsy-sanctioned level skip), and there are even one-offs like Kuribo’s Shoe – found only in world 5-3, where you can bop a Goomba from below to take over the fetching green boot it rides in, which can then invincibly trample over anything.

Such creativity permeates every part of this 8-bit masterpiece. Super Mario Bros. let players run along the top of the screen to find a warp zone, but Super Mario Bros. 3 asks nothing less than that Mario fly and drop out of the game: disappearing into unseen zones outside of the television and pressing up to enter invisible doors. There are hidden ‘sky zones’ filled with coins and very tough to locate, while underground Mario can get lost in pipe mazes. To obtain the first warp whistle Mario literally drops behind the scenery – seeming to abandon the set and props entirely – an amazing discovery, sure, but also one you’d never make on your own. This kind of secret is designed for the playground, a game that not only deserves devotion but rewards it. 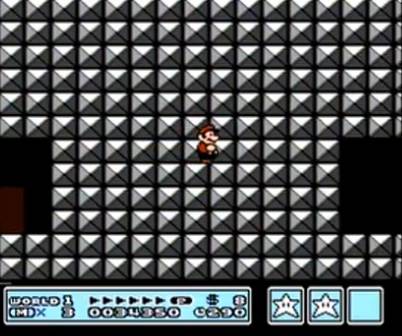 But you could take every single trick out and these levels would still be a pinnacle of 2D design. Your first steps are familiar – a goomba that’s soon squished, a piranha plant, and a row of coin boxes that hold a Super Mushroom. But the first new ability is soon spoonfed to the player – booting shells into the side of bricks and ? Boxes – and we are rewarded with the first of many Super Leafs to transform into Raccoon Mario.

SMB3 gives us the ground rules like this, then starts to go beyond. It’s one of the first platformers to have both an X and Y axis and really use them, with levels that make the player explore up and down as well as left and right, and locations crammed with surprises for curious minds. The difficulty curve is perfect because it gives the player some responsibility for it: the opening stages offer up a cornucopia of power-ups that can be stored and used when desired. These give new players a safety net for their first steps but, on your many subsequent journeys, can be hoarded for a challenge you now know is coming.

Another innovation, a top-down world map, allowed players to pick Mario’s route and, on occasion, skip especially tough levels. Levels don’t just follow one another in sequence anymore, and alternate routes may have nothing to do with ‘finishing’ a world – but simply allow the designers to build a set-piece ratrun or set a challenge too bumpy for the main route. Castles dotted throughout each map stay destroyed even if you continue, acting as de facto checkpoints. At the end of each world there’s an airship to be conquered and, if you’re not successful first time around, it has to be chased around for another go – meanwhile Hammer Bros. scarper along the same routes, heading off Mario and forcing mini-showdowns with a power-up prize. The sequel had the name, but this is the first game where it truly felt like Mario had a world. 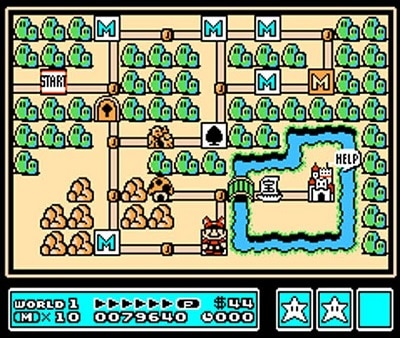 In true Miyamoto and Nintendo fashion this structure became a plaything, feeding into the platforming action with items and allowing itself to be circumvented by  those in the know. Mini-games are dotted throughout, and to more ends than ever. There’s the simple bonus locations where you stop Toad’s spinning displays or flip cards to win prizes. At the end of every level you have to hit a flashing box to exit – which rewards you with a card showing a star or a fire flower or a mushroom, and three of these in combination hand out bundles of extra lives. Everyone knows how to get the warp whistles, but that doesn’t stop it being a thrill every time – but at bottom, this operates as a proto-level select function, allowing experienced players to skip straight to the end or play where they would. World 3’s castle, incidentally, is placed on an island resembling Japan, roughly where you’d expect to see Kyoto – Nintendo’s home town – and this castle’s king looks exactly like Mario.

Heroic doppelgangers? What a world this is. We’re all so familiar with Mario’s universe that the surreal side has been normalized: the Alice in Wonderland mushrooms that balloon him up in size, the anthropomorphic clouds and hills that silently watch the spectacle unfold, the music blocks that plink-plonk as you bounce across. The list is so long: the Chain Chomps, barking balls with teeth that strain at their leash to get you; an Angry Sun that gees itself up before swooping down in a crescent to burn you; the Boss Bass and Big Bertha, fat fish that leap out of the water to try and swallow Mario whole, or wait in the depths for his descent; Para-Beetles, flying koopas that Mario can hitch a ride on; Jelectrocs, glowing electric jellyfish that don’t move but just wait for a careless swimmer to misjudge their momentum; Paragoombas, Micro-goombas, Fire Snakes and Fire Chomps. The final battle with Bowser is a game of cat-and-mouse where you have to fool him into breaking the arena’s floor and killing himself – a design that the wonderful Spelunky re-imagines at its own climax, a tribute across generations of great platformers. 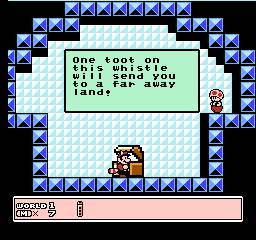 SMB3’s rogues gallery had a variety and verve that has dominated the series ever since. Boo, the ghost who’ll hide its face when you look at it and attack when your back is turned, first appears here and is allegedly based on Takashi Tezuka’s wife. Tezuka made the mistake of working one late night too many, and her usually placid nature exploded into a rage: when Miyamoto heard of this from his colleague, Boo’s dual nature popped into life.

Even the supporting cast has more life, not least Toad’s new role as item-peddler.  Throughout the journey Peach sends Mario occasional letters of encouragement – often enclosing an item. After beating Bowser, Mario finds Peach and she kids him on that she’s in another castle. Such an easy in-joke says everything, and cues a lovely and lazy credits sequence that goes through and names all of the game’s characters and worlds.

Super Mario Bros. 3 is a world of imagination and magic like nothing before, and few since. It’s a game that starts off gently and soon ramps up into not only a huge test of skill, but a challenge to the imagination. Just how curious are you? The secrets are out there, waiting, but only for those who want to find them. SMB3 can be played in so many ways, and laid out the platformer’s future while doing so, but is also a unique product of how the games industry works. SMB3 is a team of incredibly talented designers moving on from their home, saying goodbye and paying tribute to the games and hardware that had built their reputations – and heading for an unknown future. After the credits roll, SMB3 has one final and simple flourish.

The curtain falls. But what a show.

[…] handle – they were responsible for everything from managing tension to tweaking difficulty. From Mario to Resident Evil, from gold coins to healing herbs, in games you were a wounded superhero racing […]

[…] you jumped you had to respect the laws of physics and not turn around in midair — like some other, more enjoyable, princess-saving games […]