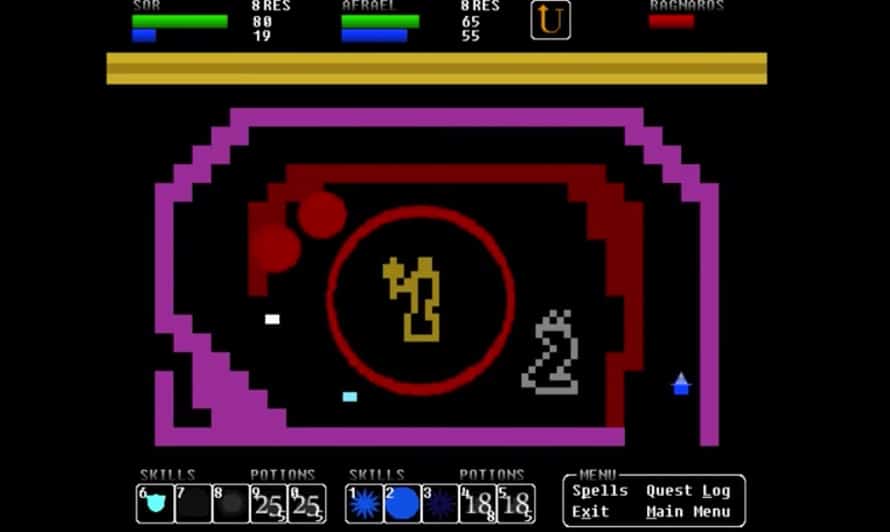 Now some folks at Gamer’s University have been crazy enough to take that joke and roll with it so far as to create a playable game out of it, with “glorious” 192i resolution, 8-way directional control (!) and “revolutionary AI that reacts to your every move (which can be in any of 8 directions, remember?)”. I’m not sure how close it is to the real Molten Core having never done that raid, but it’s still pretty hilarious.

You get two characters (and of course Alliance and Horde), represented by two lines on the screen – they’re supposedly a Priest and a Warrior, and you go about exploring the dungeon, running into tough pulls and big bosses. Features include:

– 10 Bosses with 6 Unique Models
– Move in any of 8 unique directions
– Lush 2d environments
– Glorious 192i resolution
– Has Sound
– Revolutionary AI that reacts to your every move (which can be in any of 8 directions, remember?)
– Skinning a Bear should aggro every Bears in a 40 yard radius

I couldn’t really figure it out. The manual says “press your button” to attack and while I was trying to press my button I ended up dying. Oh well. Download it here.

But I deeply Dig this.

I’ve quit multiple times. I might start replaying just so I could quit again. I just can’t quit this game enough.