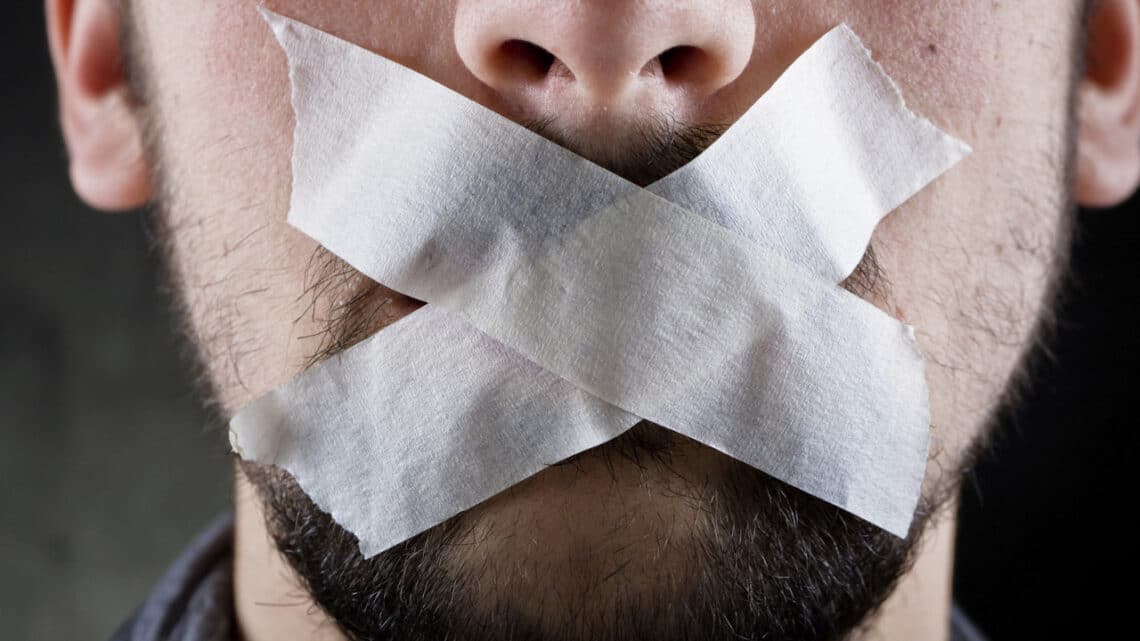 Big business likes to talk on its own terms, in video games as elsewhere. Announcements about upcoming games are delivered according to strict marketing schedules, while the biggest publishers only allow their developers to discuss their work with both the press and the public within very specific timeframes.

To prevent information leaks outside of approved timeslots, most big developers require their employees to sign non-disclosure agreements, usually referred to as NDAs. These legal contracts prohibit developers from external discussion of a project without prior permission. Giving an unsolicited interview, letting slip information on social media, or even discussing a project with friends over drinks, can potentially result in punitive action against the individual in question. To someone standing outside the games industry looking in, this might seem strange and intimidating. Why wouldn’t you want your developers to talk about the great game they’re working on? And why go so far as to enforce a legal response if they do?

“Sometimes you just want to get on with your work and not have people sticking their noses in before you even know what you’re doing yourself.” That’s Sam, a game designer who wished to remain anonymous for our discussion (Sam isn’t their real name). Sam has worked for several mainstream studios, and has plenty of experience working under NDA. Sam’s view on the games industry’s employment of NDAs is best described as pragmatic. “Leaks hurt development, if people get too hyped up too soon it can kill buzz and destroy marketing plans.”

There’s certainly truth in this. Most games can take anywhere between a year and five years to develop, and change radically during that time. If information gets out too early, it can lead to misunderstanding and backlash from the audience, either because they don’t like an idea that isn’t fully implemented, or because they do like an idea that gets changed or removed later on. “It’s not about being meanies who don’t tell the world our amazing-ness, it’s about protecting an idea and only showing it when its ready,” Sam says.

The thinking behind NDAs here is understandable. But when you consider how NDAs are employed in games industry, the power they represent and the extent to which they are wielded, serious problems become apparent. In their current form, NDAs are not simply an inconvenience to nosey journalists, they’re harmful to developers and the industry as a whole.

NDAs cause problems right at the beginning of a project. “I’ve lost count of the number of cold calls I’ve had from recruiters who can’t actually say what a project is, only that ‘I’ll like it’,” Sam says. “In interviews a couple of times, I’ve signed an NDA before I even took off my coat in a studio, and by the time I leave I still have no idea what they actually wanted to hire me for.” In other words, NDAs can be problematic for game developers before they’ve even got a job in game development. “Especially when knowing that the role is on a big franchise that’s close to your heart could make all the difference in how passionate your answers are in an interview,” Sam adds.

NDAs also affect the culture of game development, creating islands of developers between studios and sometimes within the same studio. There are positive sides to this – working on a secret project is naturally exciting – but forcing developers to keep silent about the positive sides of their work, for years at a time, feeds into how they react when a problem comes up. “When something really shit is going down, it’s stressful to not have the option to turn to other devs outside of the studio you’re working for, for advice,” Sam says. “Not just about the game, but about internal politics.”

A good example of this is ‘crunch’, the phenomenon of developers working extremely long hours due to a combination of poor management and internal pressure. There are countless stories of developers working themselves into the ground and feeling unable to discuss the problem for fear of social isolation from colleagues or even litigation from their employer.

As already mentioned, NDAs are broadly a big-business game development phenomenon. Indeed, the larger the corporation, the more stringent the legal documents tend to be. Independent developers, by comparison, usually adopt a more open and flexible relationship with the press and public. Indeed, the use of NDAs is one of the factors that spurred Jordan Thomas, formerly of Ion Storm Austin and Irrational Games, and Creative Director of Bioshock 2, to set up his own independent studio, Question. The game they are making, The Magic Circle, is inspired by the frustrations of big game development.

“Watching everything you say can erode your enthusiasm,” says Thomas. “In a lot of cases, the [legal] language has become so draconian because companies have gotten so large that they can’t trust the individual employee to use their best judgement. So what happens is a kind of blanket measure, which in a lot of cases suppresses people expressing natural enthusiasm for working on an exciting project.”

Thomas has been in game development since the late Nineties, and has seen the industry’s relationship with both the press and the public change dramatically over that time. “One of the ways in which it felt a little bit more clear-eyed was in its approach to promotion and to individual freedom to speak about the work,” he says. Thomas acknowledges how the internet and social media has radically changed how news circulates: back in 1997, a slip of a developer’s tongue might have only reached 50,000 people in a magazine a month after the fact, whereas now it can reach millions of people within minutes. But he believes the solution to this is transparency rather than secrecy.

“I think there is a far less adversarial relationship with a group of people that feel they are in the know,” Thomas says. “It helps to defang the expectation that we’re being lied to, being sold to, being promised things that don’t actually work if you are willing to, early and often, show the public what you’ve actually got working. And it sort of gets you out of that trailer mentality and makes you think a little bit more about ‘Is this actually playable, even if it’s ugly?'”

Thomas is also keen to point out that the NDA is one of the lesser legal documents that companies use to control developers. Alongside non-disclosure agreements, employees are also often asked to sign a non-compete and a non-solicit. The former states that, if upon leaving the company, the former employee will not create a product that directly competes with whatever they were working on for a set amount of time, while a non-solicit states that they won’t subsequently encourage other developers from the same team to join them on their new project.

“Every big company that I’ve worked for has had some variation of this,” Thomas says, “And more savvy senior developers can push back against them to a degree. But most employees, especially in the first few years of their career, they don’t know what their rights are, they sign things without thinking.” These documents can have a compounding effect on a developer. If they breach an NDA, not only can they lose their job and face legal action, but they can be rendered unable to work for a year or longer because their skill-set is in an area that brings them into conflict with their “non-compete” agreement.

Such is the power of the legal restrictions on what game developers can and can’t say, that there are projects Thomas worked on over a decade ago that he is still reluctant to talk about. “I spoke about one of the many incarnations of a Deus Ex 3, before Human Revolution had come out and before the death of Ion Storm Austin” he says. “And I think I kept the details extremely soft. But y’know, you always wonder, and you try to be as careful as possible.”

This is where NDAs cause the most damage. They don’t simply prevent developers from talking about a project for the duration of that project, but for five, ten, even twenty years into the future. Sometimes developers are reluctant to discuss projects that never even made it into production because of an NDA they might have signed years beforehand.

One person who has contended with this issue frequently is Joe Martin, a former games journalist who retains a passion for researching and uncovering unreleased games. It was Martin who interviewed Thomas about the lost Deus Ex sequel, and from Martin’s experience, Thomas was one of the more effusive interview subjects. “One developer I spoke to for a piece I wrote about a cancelled Thief title set in the modern day refused to be named in the final piece and was very, very nervous about speaking at all. Even despite the fact that the developer he worked for no longer existed and that it was over ten years ago.”

Another time, Martin contacted a former developer at LucasFilm Games who had access to design documents a quarter-of-a-century old. “As soon as I pressed for details or asked to see them however, he instantly clammed up for fear of litigation.”

The issue here goes beyond frustrated curiosity. For starters, NDAs often prevent the games industry from learning from its own successes and failures. “Look at an old studio like Ion Storm,” Martin says. “Ion Storm had several separate teams, led by visionaries like Warren Spector and John Romero. They made games that ranged from Deus Ex to Daikatana. What was different about their approaches which produced such different results? It’s hard to know for sure because NDAs (and, more importantly, the broader culture of games development) prohibit talking about it.”

The residual gagging effect NDAs have also means there are huge gaps in our knowledge about the history of the games industry. The origins of so many games or unfinished projects are left unheard because developers cannot or are simply uncertain about whether they can discuss it openly. We’re fortunate in that the vast majority of gaming history still exists within living memory. But within a couple of decades this will no longer be the case.

“I really wish that developers and publishers could agree on a sensible middle-ground, such as an expiry on the NDAs,” Martin says. “Like, developers are allowed to talk about anything after three or five years have passed, for example. That would give publishers some protection and give developers some freedom.”

That solution seems perfectly sensible. But there’s also a sense that, possibly, NDAs are not a sustainable method of managing communication of a project with the outside world. “Culturally, all of us are comfortable with a little more disclosure than we once were,” Jordan Thomas concludes. “Certainly my generation and especially the up and coming generation. The amount that they feel not just comfortable but actually driven to share with literally everyone is staggering.”

Indeed, as the games industry grows, sharing information becomes easier and creators become naturally less inclined to be secretive, enforcing silence via litigation is going to become more and more difficult, and finding alternative methods of managing how information spreads will be crucial.