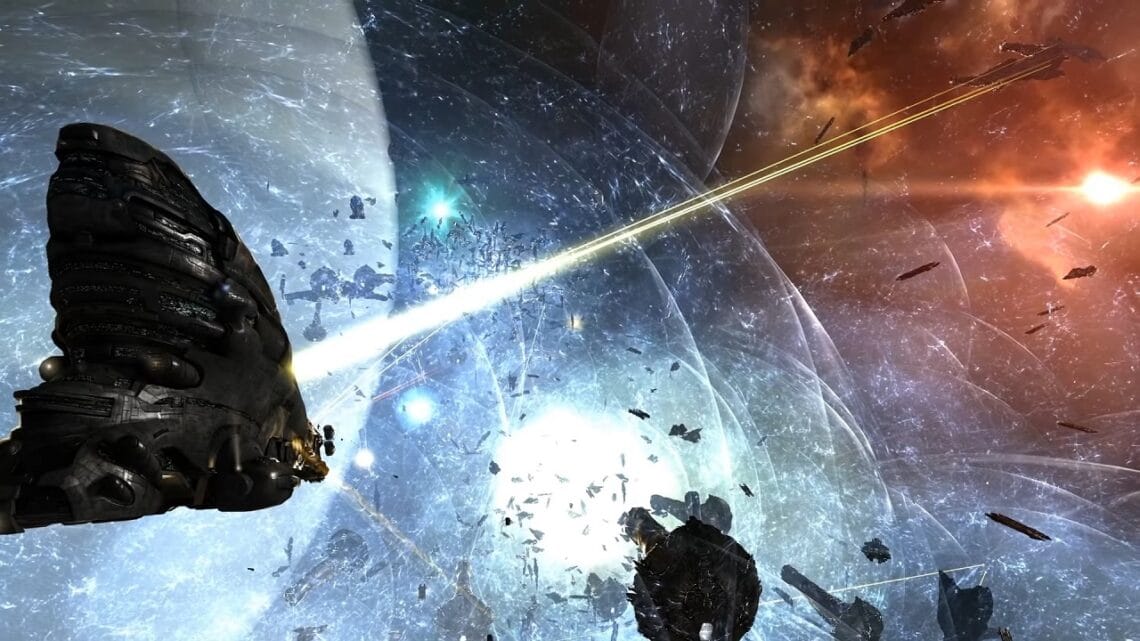 MMOs have been fairly run-of-the-mill ever since Blizzard achieved its massive success with World of Warcraft. One MMO that somehow managed to survive the influx of casual play and generic fantasy races is Eve Online, the space sim that has regularly been likened to playing a spreadsheet rather than a game. While that assessment turns out to be true more often than not, another thing Eve is known for is truly massive player-versus-player battles. It seems the game sets a new record for the scale of online battles every year now, and though this year has only just begun, Eve is at it again.

This time around, the battle appears to be the crux of a war that has been raging since October, now being fought over a space station that, if captured, is thought to turn the tide. The war is being fought between two in-game alliances, the CFC and the N3PL, and is the biggest since the Battle of Asakai, which took place last year. Rather than enacting a carefully strategized plan, the fight, known as the Battle of BR-5RB (or Battle of B-R for short), began because of an accident.

Control of a system was dropped when the owners of a space station basically forgot to pay rent, and opposing forces quickly seized the opportunity. After both alliances gathered massive forces — totaling over 3,000 people in the single system — the battle began. Trillions of ISK (Eve’s in-game currency) have been lost in damages, reportedly totaling over $300,000 (or real-world money).

To those of you not aware, since late last year Eve has seen a perpetual war ongoing between CFC (a large “Bloc” of alliances) with their Russian allies, and the N3/PL alliance. Both have been brewing for a good old fashioned fight and manpower, resources and money has been stockpiled on both sides in preparation for the time when both fleets would inevitably come to blows. The Battle of B-R (BR-5RB) at this time appears to have been that fight, but it started, much like the battle of Asaki, from simple human error. The failure by S2N to pay the maintenance bill on the system was the catalyst for this epic battle.

B-R is in a region currently involved in the ongoing war, and had been used by PL/N3 as a forward staging ground in this conflict for their fleet. Allies of N3/PL Nuilla Secunda (S2N) were found to have failed to maintain their sovereignty over the system, and once discovered by the Russian alliances affiliated with CFC, the attack began. RUS forces first established a foothold, sending a fleet in and capturing the system station preventing access to anyone from N3/PL. They then began contesting control of the system with their own TCU (Territorial Control Unit) while attempting to eradicate the S2N’s own TCU.

As things tend to do in Eve, it quickly escalated. N3/PL brought forth their full force against the RUS, trying to end the battle before it begun by removing the RUS forces and restoring control of the system. Before they could do this, CFC forces arrived and a full on battle begun.

Trading blows hour after hour, Not only the reported Titans were being destroyed on both sides, but super-carriers, dreadnaughts and carriers all descended upon this system to reinforce both sides fleets.

After numerous hours of fighting, the gap between the losses became insurmountable for N3/PL and while for a time it had been a one for one loss on titans, the scales tipped in the favour of CFC who continued to take down these colossal ships while minimising their own losses.

The TCU finally online, N3/PL ordered a retreat and while this is being typed now, CFC and its allies are still chasing down and destroying the remnants of the N3/PL forces.

As previously shown, the real world cost of these galactic exploits can be assessed, and thus far several trillion ISK of damage has been done, approximately equating to $300,000, with an unconfirmed 60+ Titans lost from the N3/PL fleet and 30+ from the CFC side along with numerous other smaller ships. The previous largest battle, (Uemon), saw 12 Titans destroyed and 1 Trillion ISK of damage in comparison, so at this time this has been the largest Battle both for Damage value and Titan loss in EVE history.

CFC appear to have won the battle of BR-5RB, but for the time being the war rages on.

Reports from participants suggest that the battle has already been won by the CFC, as the opposition no longer has enough power to destroy the CFC’s most powerful ships. All that’s left is the slow, meticulous burn of cleaning up the remaining enemy forces.

Out of all the online games throughout history, Eve always has the best stories — ones that far outshine the game’s spreadsheet-like gameplay. Thankfully, though, there are players who dig the grind that create these stories for us to enjoy without having to actually jump into the math simulator itself.

A history of griefing: gamers who ruin your day for kicks – Ganker

[…] of the most audacious moments in griefing history came earlier this year in Eve Online. A group of players spent months preparing what became known as “Burn Jita,” a […]

How does the loss in dollars work then? Are the ships and resources bought with real money/ISK and once destroyed are they irretrievable? Meaning you would have to go out and buy another ship to replace the one destroyed in battle? This is melting my brain…. someone help me out

Its an MMO so it has a subscription fee, called Plex. Plex is also a resource in game so can be sold for in game currency. So, the cost of subscription in $ can be translated directly into ISK ( I think is 250 Million for a Plex)

Since you can convert ISK to Dollars, you can work out the real world cost of the loss, based on ISK cost to create the items. Titans run into Trillions of ISK, hence the 6 digit USD figure losses.